This easy chicken karaage recipe is a classic Japanese dish that is extra super crispy because of the double frying technique!

It probably comes as no surprise to my friends that karaage, Japanese fried chicken, is something we almost always order when we go out and get ramen. My partner AJ is basically obsessed with all things fried chicken. And, truth be told, I’m pretty obsessed with fried chicken too. I make my easy fried chicken recipe a little TOO often. But the real reason I don’t make karaage at home is mostly because I often opt to make my Taiwanese popcorn fried chicken which is harder to find here in San Francisco!

But sometimes I get that craving for Japanese karaage fried chicken, and it’s not too difficult to whip up if you’re not afraid of a little of bit of deep frying. The chicken needs a quick marinade for the boost of flavor, then it’s a double fry, giving the karaage an extra crispy coating. It’s what distinguishes this chicken karaage from other fried chickens!

What does Karaage mean?

Karaage (sometimes spelled Kara-age), pronounced “kara-ageh”, is a Japanese-style technique of deep frying. It’s a little different from the other popular Japanese deep-frying technique of tempura, which is batter dipped. Karaage instead is coated with flour or starch and then deep fried.

The most popular karaage is fried chicken or chicken popcorn, though you can also find other sorts of karaage, including vegetables, fish and squid. Unlike some other styles of fried chicken, most chicken karaage recipes use small nuggets, traditionally made from the thigh meat, but you can use breast meat if you want.

I buy chicken thighs that have both skin and bones still attached. It’s more economical. I remove the thigh bone, which is easy to do, and then freeze them to make chicken stock later. I leave the chicken skin on because the richness of the skin adds a layer of crunch and flavor to the fried chicken! But if you’d prefer, you can totally use boneless, skinless thighs or breast meat.

How to make karaage chicken

To make karaage, you first cut chicken thighs (preferably with skin on) into 1 1/2 to 2 inch pieces. Marinate the chicken in a soy and sake marinade for 30 to 60 minutes. Once marinated, coat the chicken with potato starch, which is the traditional coating for karaage.

Once coated, you deep fry it at a lower temperature, to cook the meat. Then let it cool and fry it again at a higher temperature to create an extra crisp coating on the outside!

Why the double frying?

A lot of recipes only have you frying the chicken once, which is easier but also doesn’t lead to the crispy crunchy best karaage. A double frying, much like when you make double fry french fries, gives you an extra crunchy outside coating that you just can’t achieve by a single frying.

Because the second deep frying is so quick, it also allows you to quick heat up and crisp ALL the karaage chicken pieces. This ensures you serve all the chicken hot, not just some of the chicken at a time.

Do I have to make karaage with chicken thighs?

Nope! You can totally make karaage with chicken breasts if you want. But traditionally karaage is made with thighs, as the meat is more tender and juicy. If you do substitute chicken breasts, keep an eye out on the timing as you don’t want to overcook the meat, which will lead to dry and flavorless karaage. You may also want to marinade the chicken an extra hour to make sure it has more flavor in it.

Can you use skinless boneless chicken thighs?

Sure! But I prefer using thighs with skin on them, as the skin adds an extra layer of rich crunchy goodness and keeps the meat juicy and tender. If you get your chicken from a grocery store with a butcher, you can ask the butcher to remove the thigh bone from the chicken for you and leave the skin intact. Or just buy thighs boneless and skinless and use that.

Can you make the karaage ahead of time?

Yes! I like to make my chicken ahead of time by preparing it and then frying it the first time once. At that point, I can either store it in the fridge overnight, or let it sit at room temperature for up to 2 hours. Once I’m ready to serve it, I heat the frying oil to 350°F and do the final frying.

You can also store the already twice-fried karaage in the refrigerator and warm it up in the oven. Chicken karaage stores pretty well, though nothing beats karaage served hot from the fryer!

How to store Karaage leftovers

Like all things fried, Japanese fried chicken is best eaten right after it’s made. But Japanese karaage actually stores and heats up really well! This is because the exterior coating is already extra crunchy to begin with.

So if you’re like me, you probably are gonna want to make extra karaage! It’s a great snack or can be used in a bento box/grain bowl as the main protein. And if you’re going to be deep frying you might as well take advantage of the hot oil and make extra!

Just let the karaage chicken cool to room temperature, then store the leftover chicken in the refrigerator in an air tight container for up to 3 days.

Can you freeze homemade karaage?

Yes! You can freeze it. I place the cooked fried chicken on a baking sheet and let them freeze solid. Then I store them in a ziplock bag or airtight container for up to 3 months. Freezing them on a baking sheet means they won’t all stick together in one giant lump.

How to warm up leftover karaage

I don’t recommend using the microwave to warm up the chicken, as that will lead to a soggy crust and part of the joy of fried chicken is the crispy exterior.

Instead, heat up the chicken in a toaster oven or in the regular oven. Just preheat the oven to 350°F, place the chicken on a foil lined rimmed baking pan (for easy clean up) and heat it up for about 10 minutes, or until it’s hot throughout. You can even heat the chicken directly from the freezer this way. Just increase the time to 15 to 20 minutes.

What do you serve with karaage?

Karaage is flavorful enough to serve and eat by itself. But if you want, you can totally serve it with:

How do you make gluten free karaage?

Unlike traditional fried chicken, Japanese fried chicken uses potato starch instead of all-purpose wheat flour. That means the coating is naturally gluten free! Just makes sure to use tamari (a gluten free soy sauce) and your fried chicken should be gluten free. As always, cross contamination can happen in the kitchen so be aware of equipment that might have touched gluten products. This includes if your frying oil has previously fried anything with wheat flour or gluten in it.

What is potato starch? And where do I get it?

Can I substitute potato starch for something else?

You can substitute cornstarch for the potato starch but keep in mind that the end result won’t be quite as crispy as it would be if you had used the traditional potato starch. But the flavor from the marinade will still shine through and the karaage will still be pretty tasty and crispy!

Or maybe you’d like these awesome Asian snack and appetizer recipes:

And check out these other fried appetizers and bites: 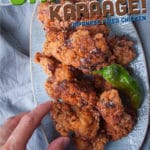 Japanese karaage fried chicken is a marinated chicken that is double fried to give it a super crispy exterior and a juicy flavorful interior. The marinade uses a few specialty ingredients that can be found online, at a well-stocked grocery store or an Asian grocery store. But I’ve also listed substitutions for them using more common ingredients you might have in the pantry. Keep in mind that if you use the substitutions, the flavor won’t be quite the same, but will still be pretty tasty.
Course Appetizer, Snack
Cuisine asian, Japanese
Keyword chicken, fried, japanese
Prep Time 15 minutes
Cook Time 10 minutes
Marinade time 30 minutes
Servings 4
Calories 667kcal
Author Irvin

You can buy chicken thighs with skin and bones and just remove the bones. Or ask if the butcher at your local grocery store will do it for you. You can also use boneless and skinless chicken thighs (or breasts) if you’d prefer. But the skin adds an extra richness and crunch!

This blog currently has a partnership with Amazon.com in their affiliate program, which gives me a small percentage of sales if you buy a product through a link on my blog. I only recommend products (usually cookbooks, but sometimes ingredients or equipment) that I use and love, not for any compensation unless otherwise noted in the blog post. If you are uncomfortable with this, feel free to go directly to Amazon.com and search for the book or item of your choice.
137shares