These luscious and easy to make white chocolate green tea brownies, made with matcha, were inspired by a Japanese Craft Beer tasting I went to recently. (Jump directly to the recipe.) 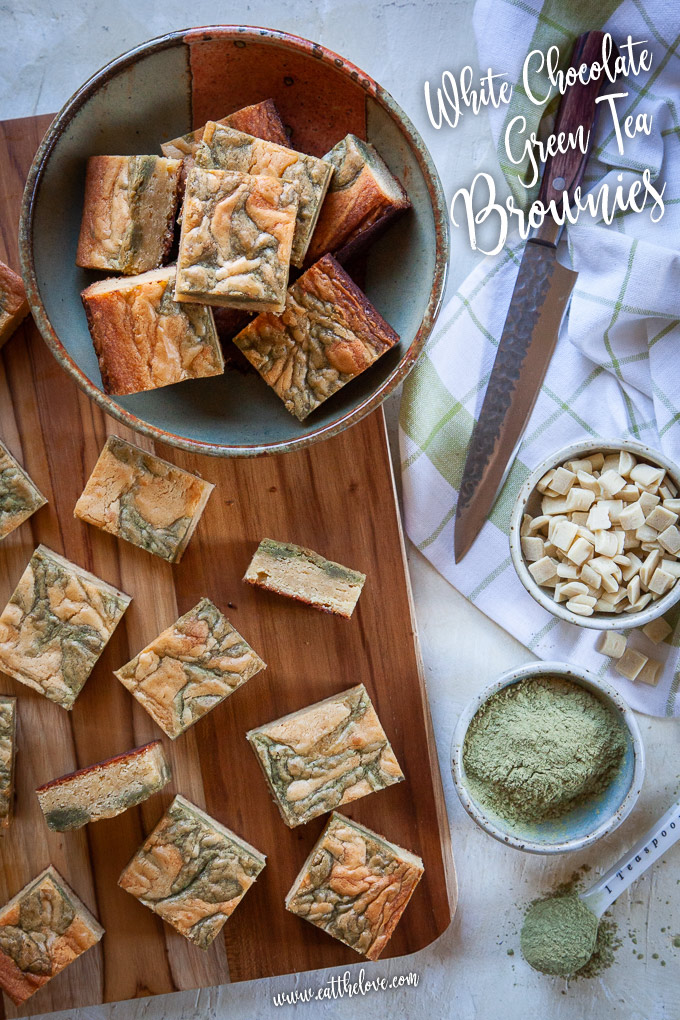 “Irvin! I wasn’t expecting to see you here!” said my friend Amy. She’s a food writer and any time I go to a food event (which is more and more rare as I’m finding myself busy doing other non-food related things) she’s there. But I told her that I’m trying to go to more things, thus my presence at the tasting and workshop on Japanese Craft Beer. In fact, I know little to nothing about beer or craft beer, much less Japanese Craft Beer. Other than taking a swig or two of AJ’s major Japanese beer when we get ramen, I’m clueless about Japanese beer. But 2019 is the year I’m trying to push myself out of my comfort zone more so here I was, ready to learn. 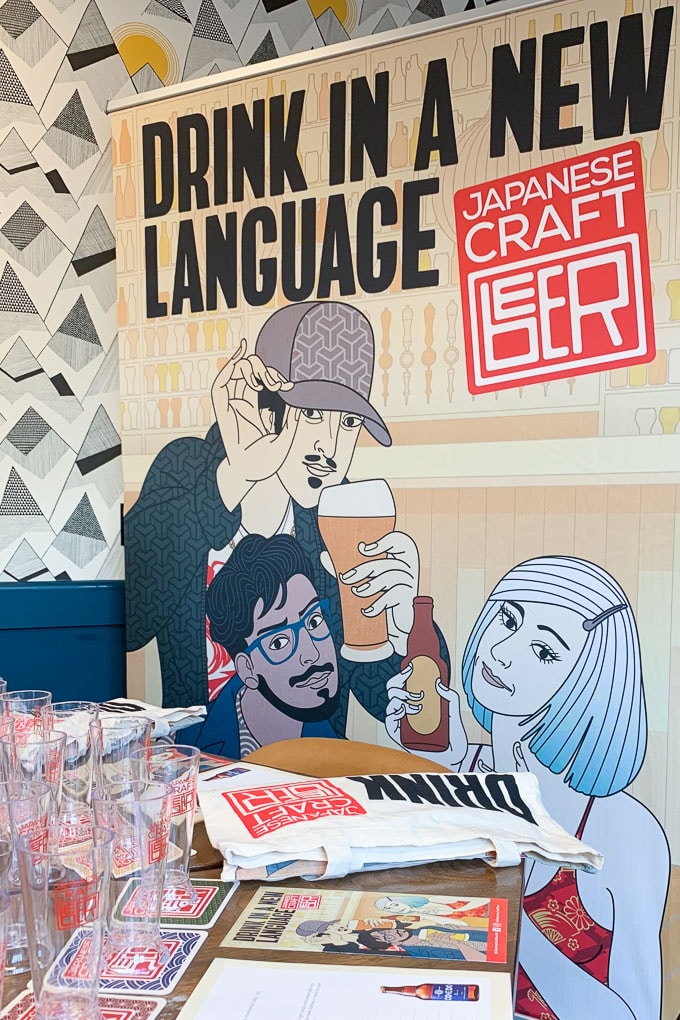 It turns out Japanese beer is pretty fascinating. Japan is one of the largest producers of beer, even if they are one of the lowest per capita drinkers. Beer is part of their culture and they don’t have open container laws. That’s why you hear about beer vending machines in the streets of Tokyo (though those are as getting harder and harder to find from what I hear) and they often push a beer cart on the bullet train.

Unlike the US, it’s illegal (even to this day) to home brew beer. But in 1994 Japanese law changed, allowing small beer producers to actually start brewing. The folks that had the most experience brewing alcohol were sake producers, so most of the smaller craft beers initially came from sake companies. Since sake is brewed in the winter, this allowed the companies to brew alcohol all year round. 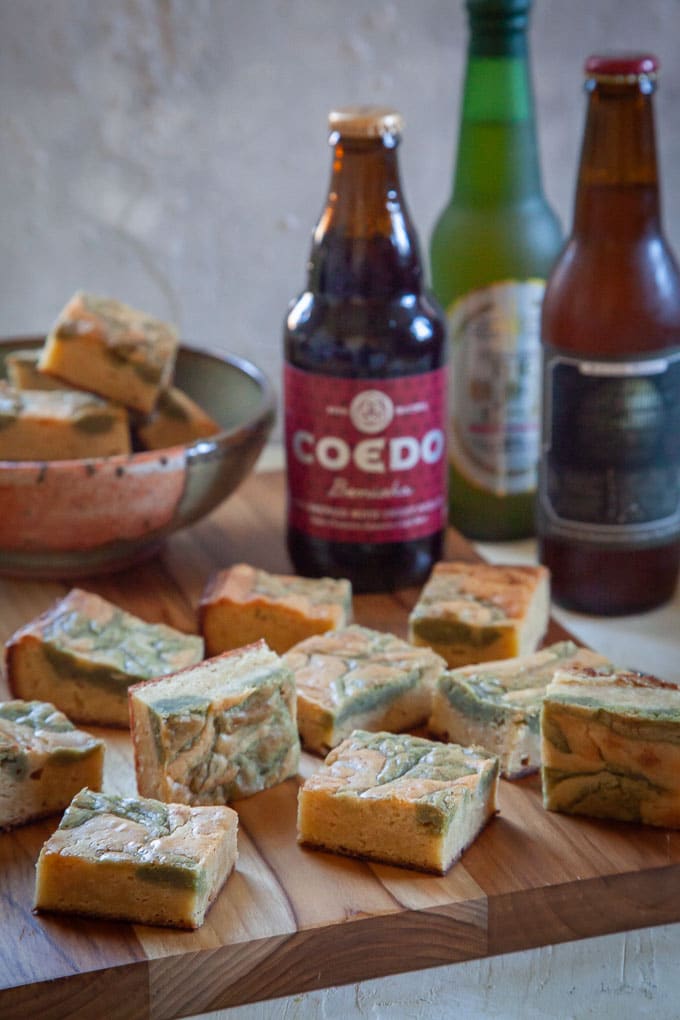 Even though the Japanese were greatly influenced by the German (a large number of sake companies initially hired Germans to come over and help them start brewing beer as they had no idea where to start) I noticed that a lot of the beers I sampled seem much more subtle and nuanced in flavor than German beers that I’m familiar with. Japanese beers is often drunk before and with food, and so it makes sense that the beer would pair so well with the subtle delicate flavors of Japanese cuisine. 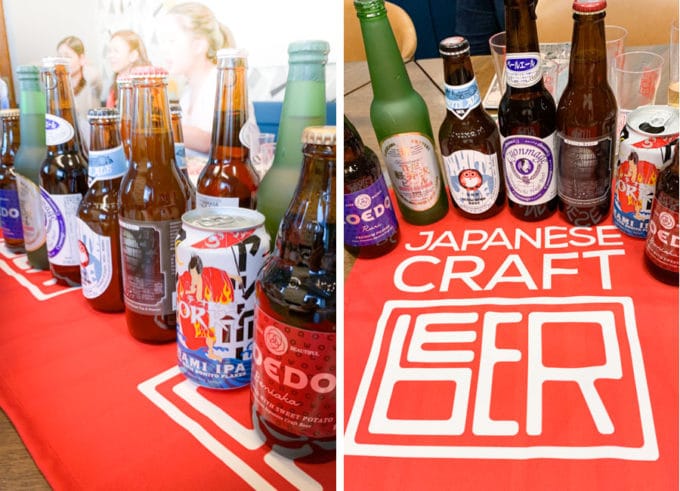 In the end, I realized that as much as I don’t drink beer, I really enjoyed the Japanese craft beers I sampled. The Cyonmage “Pale Ale” was an example of beer that I was expecting to be bitter but it was less so than some of the other Pale Ales I’ve had. The Weiss beer by KARUIZAWA Brewery Ltd. came in a cool frosted green bottle and has a clean crisp fruity flavor, while the two Coedo beers were fairly different, the Coedo Ruri being slightly bitter and light, I could imagine it pairing with sushi, while heavier Coedo Beniaka was brewed with roasted sweet potatoes which I found fascinating. There was subtle caramel notes but totally dry, not sweet at all. I could see drinking it with Japanese yakitori skewers, or even American-style BBQ ribs. It was super smooth. The adorably cute Hitachino Nest White Ale by Kiuchi Brewery had some subtle and crisp baking spice notes in it, which makes sense as it was brewed with coriander, orange peel and nutmeg. And some of the beers used Japanese cuisine and ingredients in their brewing, like the Sorry! Umami IPA by YOHO Brewing which uses bonita flakes (a dried fermented smoked tuna that is full of umami – I use it in my ramen eggs marinade) but the flavor was subtle with almost a tropical note. I thought it paired really well with pizza! I was also into the Wabi-Sabi Japan Pale Ale which used green tea and wasabi in the brewing. I was expecting a wallop of flavor but instead I got a subtle herbal note with a slight undertone of spice. 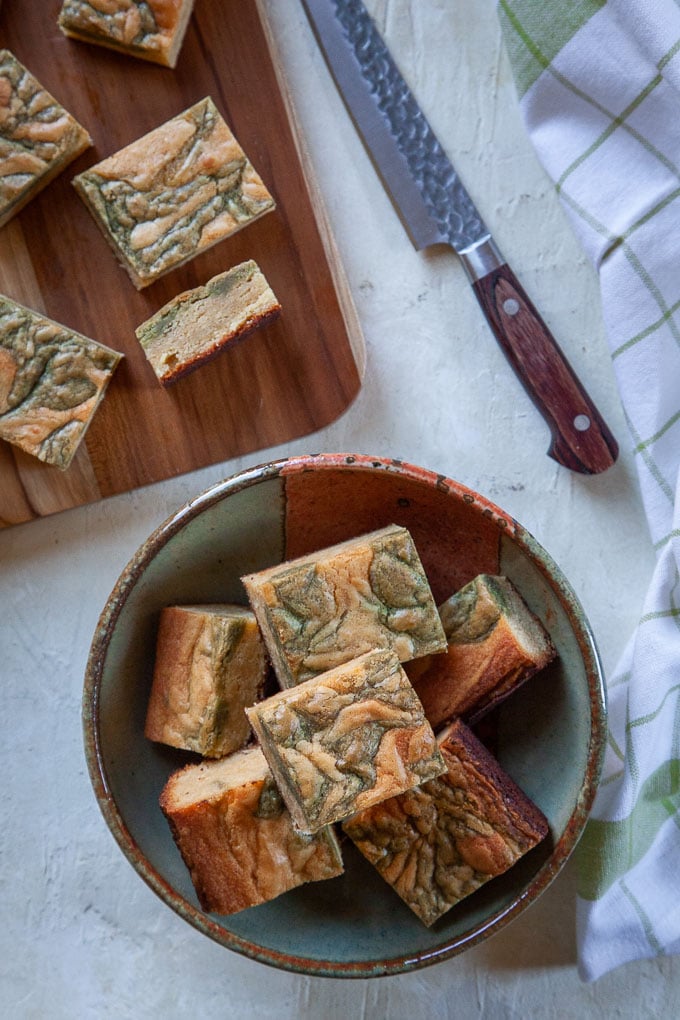 In the end I was really inspired by the Wabi-Sabi Japan Pale Ale to make these green tea and white chocolate brownies. The white chocolate caramelizes slightly in the oven as you bake these brownies, making these brownies a great thing to eat while drinking the Coedo Beniaka or Hitachino Nest White Ale or the Wabi Sabi Japan Pale Ale. But even by themselves, these swirled brownies are great all on their own. But with Japanese craft beer getting wider and wider distribution here in the US, you’ll be able to get some of these beers and try them yourself. Do it! I know I’m sold and will be tracking them down some more soon. 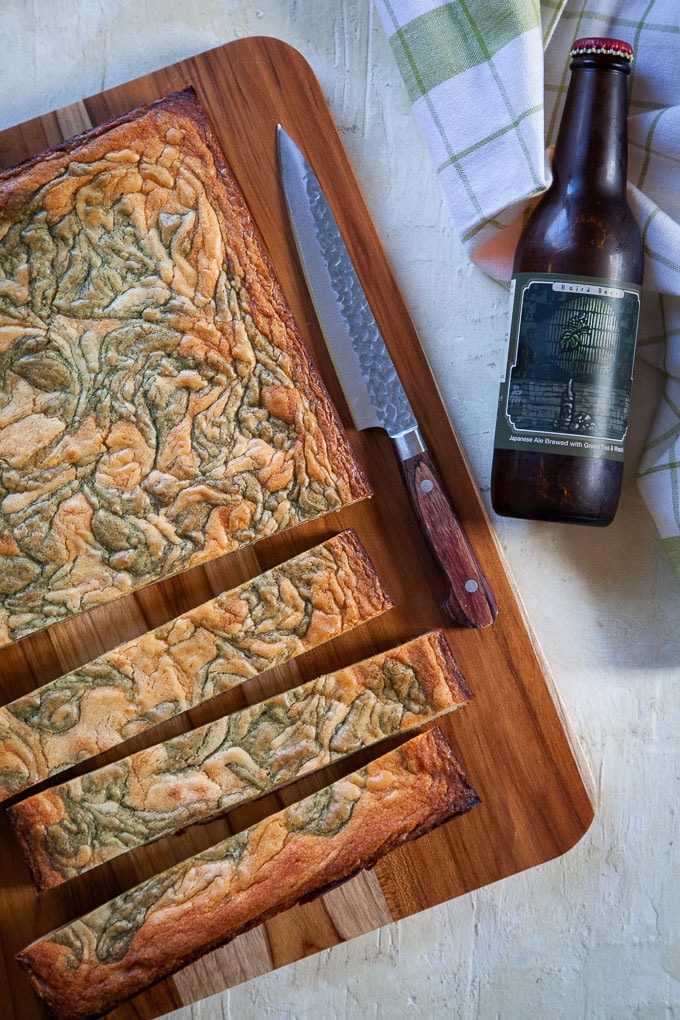 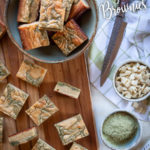 These brownies are made with white chocolate that caramelizes slightly in the brownie. The swirl of green tea is slightly herbal and bitter, balancing with the sweet butterscotch tones of the brownie. The brownie bar itself has a lovely chew and bite, like a soft dense cookie that will have you swoon with love. Pair with a Japanese craft beer or with a glass of green tea or coffee.
Course Dessert, Snack
Cuisine American, Japanese
Keyword brownies, green tea, japanese, matcha, white chocolate
Prep Time 20 minutes
Cook Time 25 minutes
Cooling Time 1 hour
Total Time 45 minutes
Servings 24
Calories 248kcal
Author Irvin

Matcha is a powdered green tea that you can get at Japanese or Asian grocery stores, well stocked grocery stores (look in the tea section) or online. Don’t bother getting the higher quality matcha, you can usually find culinary grade matcha at a lower price point. When selecting white chocolate, I usually recommend looking at the ingredient list for the bar or bag and making sure that one of the first ingredients is cocoa butter. If it’s vegetable oil, its subpar white chocolate and you’ll be able to tell with the end product.

This blog currently has a partnership with Amazon.com in their affiliate program, which gives me a small percentage of sales if you buy a product through a link on my blog. I only recommend products (usually cookbooks, but sometimes ingredients or equipment) that I use and love, not for any compensation unless otherwise noted in the blog post. If you are uncomfortable with this, feel free to go directly to Amazon.com and search for the book or item of your choice.
107shares