These sticky sweet, salty savory Vietnamese Caramel Chicken Wings are easier to make than you think! (Jump directly to the recipe.) 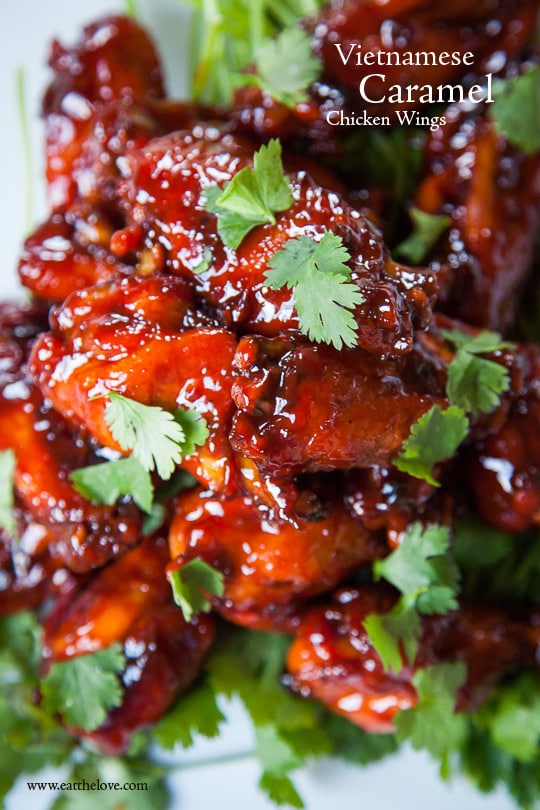 Every year AJ and I go to the big Meals on Wheels fundraiser gala where we get dressed up in black tie and sample food from some of the best restaurants in the city. But there was one time we went that was particularly memorable and it had nothing to do with the event itself. Minutes before we left for the event, dressed in our tuxedos, AJ reached into our refrigerator and the shelf in the door collapsed dropping bottles everywhere. The only bottle to shatter however, was an entire full, unopened bottle of fish sauce. It went everywhere and we were running late. We looked at each in panic, ran and got some old rags and towels, and threw them over the fish sauce. Then we closed the door and went off to enjoy ourselves at the event. 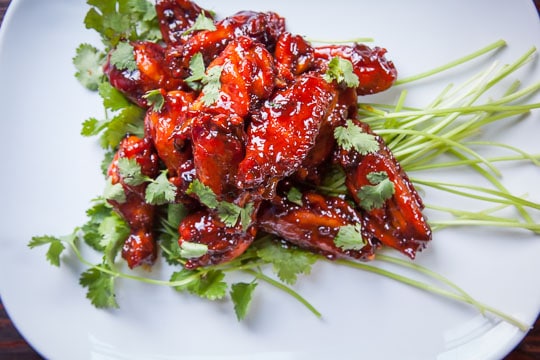 The next day we woke up and opened the kitchen door. We were too tired the night before to attempt to clean up the kitchen and we were greeted with the pungent scent of concentrated fish sauce. The sauce had gotten everywhere around the refrigerator as well as under it, where the heat of the fridge evaporated and crystallized the stuff. We moved the fridge, cleaned and moped as best we could but it was months until the faint whiff of fish sauce was gone from our kitchen. 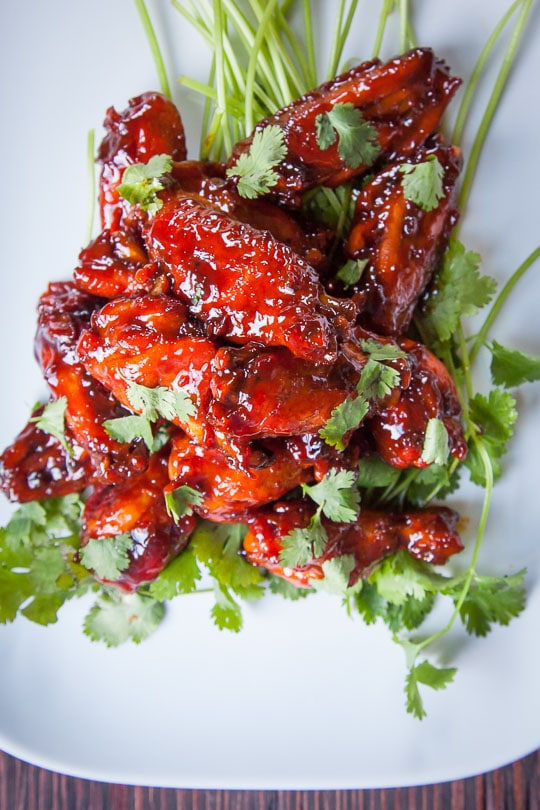 To this day, as much as we love fish sauce, when either of us use it (and we use it fairly often in this household) the smell of the stuff reminds us of that fateful evening years ago. So when I decided to make Vietnamese Caramel Chicken Wings, something that uses a fair amount of fish sauce in the glaze, I can’t help but be reminded of that Meals on Wheels Gala. But these wings are so worth any bad memories we might have from the fish sauce incident. So very much worth it.

These wings are made on the stovetop so don’t expect the wings to have crispy skin like other wing recipes. But the caramel in the glaze adds a smoky depth and cuts the sweetness in a really complex way. Don’t be scared of making these, as the lime juice that you add in the beginning of the glaze helps keep the caramel from crystallizing. 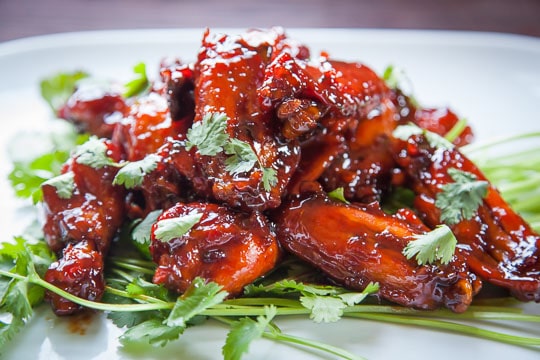 Directions
1. Place the sugar and lime juice in large skillet (one that is big enough to hold all the chicken wings). Stir until the sugar and dissolved and then turn the heat to medium high. Cook the sugar until it starts to brown and caramelize, stirring constantly with a heat proof wooden spoon or silicon spatula. Once all the sugar has caramelized, remove from heat and add the fish sauce and water.

2. Stir to incorporate the liquid. Place back on the heat and add the lime zest, minced pepper, ginger and cinnamon stick. Cook on medium high heat until the liquid starts to boil and then reduce the heat to medium low to simmer. Cook to soften the ginger and peppers, about 5 minutes, then add the chicken wings. Stir to coat the wings and then adjust heat the allow the liquid to continue to simmer.

3. Cover the pan and simmer for 30 minutes, stirring every 5 to 10 minutes making sure to flip the wings so they are evenly coated and start to darken and cook. Once the 30 minutes are done, uncover and increase the heat to medium high and cook to reduce the glaze. Cook until the glaze is completely reduced and sticky on the wings, about 10 to 15 minutes. Adjust the seasoning to taste.

4. Serve warm over a bed of cilantro, with a few chopped cilantro leaves on top.

I’m going to be posting chicken wings recipes all this week! So be sure to come back this week for more recipes.

This blog currently has a partnership with Amazon.com in their affiliate program, which gives me a small percentage of sales if you buy a product through a link on my blog. I only recommend products (usually cookbooks, but sometimes ingredients or equipment) that I use and love, not for any compensation unless otherwise noted in the blog post. If you are uncomfortable with this, feel free to go directly to Amazon.com and search for the book or item of your choice.
1940shares