I have a running joke with my partner AJ that you NEVER say no to donuts. It stems from the time when we were on a cruise and he ordered coffee from room service in the morning. The man taking his order on the phone asked him if he needed anything else with the coffee, like donuts. HE SAID NO. Obviously I hadn’t trained him properly (though had he been asked if he wanted an apple fritter, he would have said yes). You don’t necessarily need to order the donuts, but if they offer it to you, YOU NEVER SAY NO TO DONUTS (or sufganiyot – which are basically Jewish donuts).

So, when we were on a road trip across the US a couple of years ago, we found ourselves just outside of the Shenandoah National Park, at a small town that was known for their apple cider donuts. Though it the summertime and blazing hot outside, I knew I had to get a couple of donuts for the road. I have no regrets. To me, apple cider donuts are a year round treat!

What are apple cider donuts?

Why are these the best apple cider donuts?

My recipe simplifies things by using apple juice concentrate (juice concentrated down 2 1/2x), found in the frozen section of the grocery store, instead of using regular apple cider (which doesn’t have as much flavor) or boiled cider (which is difficult to source). I also use apple butter, which is a concentrated cooked apple spread and easy to find at a well-stocked grocery store. Both ingredients give the cider donuts extra apple flavor, making these the best homemade apple cider donuts you’ve ever had!

How do you make apple cider donuts?

Making apple cider donuts is pretty easy. Mix butter, brown sugar, white sugar, vanilla, spices, baking soda, baking powder and salt in a bowl until it’s light and fluffy. Then mix in the eggs, one at a time. Add about half the flour, then the apple butter. Repeat with most of remaining flour, then apple juice concentrate and buttermilk, then the tiny bit of leftover flour.

Generously dust a clean surface with flour, then scrape the dough on to it. Pat the dough into a disk, cut out donuts, then fry in a pan! Frying happens fast, about 90 seconds per side. Toss in a cinnamon sugar mixture and you have homemade fresh cider donuts! No rest time necessary and no boiling down of juice or cider. Donuts in 30 to 45 minutes!

What’s the difference between apple cider and apple juice?

In this recipe, I use apple juice concentrate because it’s already 2 1/2 times more concentrated which means it has more apple flavor. But apple cider and apple juice are slightly different. Apple cider is made from apple that are washed, cut and pureed into a mash, then the juice is pressed out of it. Cider is unfiltered and is often unpasteurized as well. It has a stronger, more robust apple flavor. Apple juice is filtered and pasteurized, making it more shelf stable. For this recipe, apple juice and apple cider are interchangeable, but if you want to use apple cider instead of apple juice concentrate, I recommend starting with 1 1/3 cups of cider, then boiling it down to half the volume, until you have the 2/3 cup, which you can use in the recipe.

What is apple butter? Can I substitute apple sauce for it?

Apple butter and apple sauce are similar in that they are both slow cooked apples. However apple butter is further cooked for a longer period of time where the sugar caramelizes and darkens the color. It has a higher concentration of sugar and much more flavor.

I don’t recommend substituting applesauce for the apple butter in this recipe. Apple sauce has much more water and less apple flavor and won’t give you a great tasting donut.

Do I need a special donut cutter or donut pan?

Nope! I make donuts at home fairly often, so I have a specific 3-inch donut cutter which makes cutting out donuts easier. But you can just use a 3-inch round biscuits cutter and then a smaller 1 or 1 1/4-inch round cutter to cut out the hole. And since this apple cider donut recipe is designed to be fried, you do not need a donut pan, which are used for baked donuts, not fried ones.

Can I bake these cider donuts?

This recipe is specifically designed to be fried like traditional cider donuts. I tested the recipe and found they do not taste that great if you bake them. I’m mean, they’ll be edible. But just barely. You need to fry these donuts! However, there are many recipes out there for baked cider donuts. Just try one of those!

How do you store homemade cider donuts?

The best way to store cider donuts is at room temperature in an airtight container or ziplock bag. The donuts will keep for about 1 to 2 days, though the longer you keep them on the counter, the less fresh they taste. Don’t try to store them in the fridge. The cold will just make them dry out more.

Can you freeze apple cider donuts?

That said, you can freeze the donuts! Keep in mind, when they thaw, the sugar coating will be absorbed by the donut. So thaw them at room temperature (or you can tempt fate and try to microwave them for 10 to 15 seconds!) and then toss them in new cinnamon sugar.

If you like these homemade apple cider donuts, check out these other apple recipes:

And check out these other great recipes that use cinnamon and pumpkin spice blend: 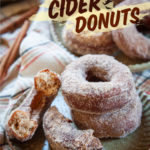 Unlike other cider donut recipes, I use apple juice concentrate (the kind you find in the freezer section of a grocery store) as well as apple butter to give these donuts a double boost of apple flavor. Using the apple juice concentrate means you don’t have to spend extra time reducing the cider down on the stove, or bother with mail ordering boiled cider. Look for apple butter at well-stocked grocery stores near the jams and jellies section.
Course Breakfast, Dessert
Cuisine American
Keyword apple, cider, donuts, frying
Prep Time 25 minutes
5 minutes
Servings 18
Calories 257kcal
Author Irvin

I use pumpkin pie spice blend in this recipe because it has a mix of spices like cinnamon, ginger and nutmeg that really play up the apple flavor. You can use my recipe for homemade pumpkin spice blend to make some yourself or just use a store bought mix. Or just use the same amount of plain ground cinnamon instead!

This blog currently has a partnership with Amazon.com in their affiliate program, which gives me a small percentage of sales if you buy a product through a link on my blog. I only recommend products (usually cookbooks, but sometimes ingredients or equipment) that I use and love, not for any compensation unless otherwise noted in the blog post. If you are uncomfortable with this, feel free to go directly to Amazon.com and search for the book or item of your choice.
40shares