These classic southern-style fried apple pies are easy to make and so very fun to serve and eat. Just follow the step-by-step instructions and you’ll be making them all the time!

“These are SO much better than McDonald’s” said A.J. after he bit into his second fried apple pie. My friends chuckled, but A.J. was dead serious. Our friend Ben is obsessed with McDonald’s fried pies and has always lamented how they are impossible to find here in the US. He grew up in Hong Kong, and they still fry their pies in Asia. But here in the U.S. they switched over to baked in 1992, over 25 years ago.

Actually, that’s not 100% true. Folks don’t know this but there ARE some McDonald’s stores that still fry their pies. I don’t talk about it much but in a former life, I used to work as a graphic designer. The majority of design that I worked on was chain restaurant work, including fast food, fast casual and family restaurants. Walk into any Ben & Jerry’s scoop shop or Quiznos and look at their menu. I designed the look of those menu board systems (or at least, I designed the original design, I’m sure they have been since evolved from my initial design in the subsequent years since leaving my day job).

Because of my former job, I got to know the CRAZY ins and outs of fast food and chain restaurants. And there’s a little known fact about McDonald’s and their pies. While the chain switched over to baked pies in the early 90s when they decided to move toward a “healthier” menu (because, you know, everyone goes to McDonald’s for health food #eyeroll) not every McDonald’s kitchen had space to accommodate the specific oven that was required to bake the pies. McDonald’s that had limited kitchen real estate were allowed to continue selling fried pies! And in fact, there used to be a McDonald’s here in San Francisco that still sold fried apple pies. It was tiny, with no seating, and a small counter that had room for just one register. Sadly it closed a couple of years ago, and that meant my friend Ben now had to fly back to Asia to get his beloved fried apple pies.

Now my fried apple pies aren’t that similar to the McDonald’s ones. They don’t have that blistered crispy crunchy salty shell (the saltiness is probably because the pies are fried in the same oil as French fries), nor do they have the napalm hot gooey sweet filling that always scalded my mouth when I bit into the pie in my youth (younger Irvin had absolutely no patience whatsoever). But I still love these fried pies so much, and apparently AJ loves them even more than the McDonald’s one. I never did get Ben’s opinion on the matter though, but then again, nostalgia is a hard things to overcome. 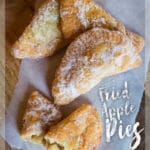 This dough doesn’t need to rest or chill and is very forgiving. The pies cook fast because you roll the dough so thin and the filling is already cooked. Just make sure to chop the apples into small chunks, somewhere between 1/2-inch to 1/4-inch! You can wait for the fried pies to cool and then make a glaze and spoon or brush it over each pie. But I like to just coat them in sugar. It’s faster, easier and means you can enjoy the pie while it’s warm. I’ve included the optional glaze in case you want to go that route.
Course Dessert
Cuisine American
Prep Time 30 minutes
Cook Time 15 minutes
Total Time 45 minutes
Servings 12
Calories 325kcal
Author Irvin

To Fry and Finish Pies

This blog currently has a partnership with Amazon.com in their affiliate program, which gives me a small percentage of sales if you buy a product through a link on my blog. I only recommend products (usually cookbooks, but sometimes ingredients or equipment) that I use and love, not for any compensation unless otherwise noted in the blog post. If you are uncomfortable with this, feel free to go directly to Amazon.com and search for the book or item of your choice.
1345shares