This classic American rustic dessert, the Apple Brown Betty is given an updated adult twist with the addition of IPA beer in the filling!

Last month, when I went up to Sonoma for Safeway to tour the Alvarado Street Bakery and Lagunitas Brewing Company I came away with a newfound respect for both of them, along with Tillamook, who was also there scooping up some of their extra creamy ice cream. After a trip to my local Safeway, I saw that apples were exploding in the produce section. And though I love making fried apple pies, apple blackberry pandowdy and apple pie bars, I was absolutely inspired by my Sonoma trip to make an Apple Brown Betty with IPA beer.

Walking into the magical world of Alvarado Street Bakery, a 100% worker-owned company is basically like walking into the Willy Wonka factory, but instead of chocolate you’re witnessing bread being born.

From their large vats of grains that are sprouting (when they say sprouted grain, they really mean they sprout the grain themselves, not use just sprouted grain flour) to the bread loafs baking through a large automated oven to the crazy machine air pumping and shaking of the pans and giant conveyor belt cooling system, this warehouse was pretty crazy awesome. The fact that the bread not only tasted robust and earthy but is better for you (high protein, low carb and easier to digest) sold me on it!

And if Alvarado Street Bakery was like Willy Wonka, Lagunitas Brewing Company was a little more like a real-life Laverne and Shirley, completely with a chance for us to pull off a bottle directly from the production line! Though the factory was filled more with hipsters and beer geeks than sassy 50s women with sensible hair, the amount of beer produced in a day seemed pretty staggering.

I was pretty impressed with the company. Especially since the owner started back in 1993 out of his home where he was promptly kicked out by his wife when he accidentally caught the kitchen on fire. Now they have production facilities in Sonoma and Chicago where they distribute their beer to 20 different countries!

Of course, I was most excited when I saw Tillamook there, serving up scoops of ice cream. I’ve long been a fan of Tillamook dairy products, which I use all the time. One of my biggest regrets in our Pacific Northwest road trip a few years ago was that I didn’t have a chance to stop by Tillamook Oregon, the headquarters to the farmer-owned co-op which was founded in 1909.

So I was pretty happy to see them included in our tour, as well as their ice cream scoop cart, where they were serving up their extra creamy ice cream! Of course, I buy Tillamook products at local Safeway along with their butter and other dairy product (as can you).

A brown betty is an old-fashioned American rustic fruit dessert. It’s basically a sibling to cobblers and crisps. Brown betty desserts have a fruit filling and then are layered and topped with crumbs or cubes of bread, instead of biscuits for cobblers or spiced rolled oats like crisps. The result is something similar to a bread pudding but without the eggy custard.

Why is called a brown betty?

Named after the original creator of dessert, the original Betty’s name is sadly lost to history. The name for the dessert, brown betty, appeared as early as 1864 in the Yale Literary Magazine. They reference the creator, a woman named Betty, as the originator of the recipe and the inspiration for the name. According to the American History Cookbook by Mark H. Zanger, another example of the brown betty desserts appeared as early as 1890. It was part of a winning essay with menu suggestions on feeding a family for 13 cents a day (can you imagine that?).

How do you make a brown betty?

Brown betty desserts are easy to make, even easier than cobblers or crisps! Layer the apples with sugar and spices. Then add buttered bread cubes over the apples and repeat! Though not traditional, I made mine a little more adult, with a little drizzle of beer over the filling. Then I sprinkle more sugar on top and bake! Super easy.

Assembling the recipe is pretty fast and easy, but if you want to make the recipe ahead of time you totally can. Just let the brown betty cool to room temperature and leave it covered at room temperature for up to 8 hours. To refresh the dessert, warm it back up in a preheated 350°F oven for about 15 to 20 minutes or until the filling is warm and the bread crumbs on top have crisped up.

How do you store a brown betty?

Brown betty desserts are best served the day that they are made. But you can store leftovers, covered in the casserole dish, in the refrigerator for up to 3 days.

Can you freeze leftover brown betty?

Yes! I suggest you portion leftovers into individual servings, then freeze in airtight containers. It should stay fresh for up to 3 months in the freezer. Thaw overnight in the fridge then warm up as per the directions below.

How do you warm up leftover brown betty?

Preheat an oven to 350°F. Bring the brown betty back to room temperature (about 20 to 30 minutes on the counter top). Then place it in the oven and let it warm and crisp up, about 15 to 20 minutes or until the filling is warm and the bread crumbs on top have crisped up.

What’s the best beer to use in this recipe?

I make this apple brown betty with Lagunitas IPA beer, one of their best sellers. The bitter and hoppy IPA from Lagunita is one of my favorites and plays well with the apples. But you can also go with their Lagunitas Imperial Stout which has a nice deep roasted maltiness instead. The maltiness would tasted great with the apples. Whatever beer you pick, make sure to use one that you like to drink! You can even go non-alcoholic with Lagunitas’ hoppy refresher, which is sparkling water with hops flavor.

If you like this fall rustic dessert, check out some of these recipes: 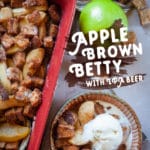 This traditional American dessert is updated for adults with a splash of hoppy IPA Lagunitas beer! The counterpoint of the bitter beer works well with the sweet tart apples and buttery crumb topping. You can make this non-alcoholic as well by using Lagunitas hoppy refresher, which is a sparkling water with hops flavor that has zero alcohol in it.
Course Dessert
Cuisine American
Keyword apple, brown betty, fall, rustic dessert
Prep Time 15 minutes
Cook Time 1 hour
Servings 10
Calories 309kcal
Author Irvin

If you want a deeper more yeasty and hoppy filling, you can soak the apple slices in 2 bottles of IPA beer for 2 hours at room temperature before making the brown betty. Just drain the beer, reserving 1/2 cup of it for the filling, and use the remaining beer for another recipe (like my rosemary cheese beer bread, my olive green onion beer bread or my pumpkin eclairs filled with chocolate beer pastry cream).

This blog currently has a partnership with Amazon.com in their affiliate program, which gives me a small percentage of sales if you buy a product through a link on my blog. I only recommend products (usually cookbooks, but sometimes ingredients or equipment) that I use and love, not for any compensation unless otherwise noted in the blog post. If you are uncomfortable with this, feel free to go directly to Amazon.com and search for the book or item of your choice.
22shares