These eggnog cinnamon rolls use store-bought eggnog and have a bourbon cream cheese glaze! They’re one of the best holiday morning treats you can make.

If you poke around my blog you’ll noticed that I have a mild obsession with eggnog. I’ve made eggnog pancakes, eggnog cheesecake, apple fig cobbler with eggnog biscuits and even a triple layer spice cake with eggnog frosting! And I also happen to have a (un)healthy love of cinnamon rolls, like my sweet potato cinnamon rolls, my pumpkin cinnamon rolls, my rosemary and pistachio cinnamon rolls (they sound a little weird but trust me, they are SO. GOOD.) and my quick and easy cinnamon rolls. But somehow, I have NOT gotten around to making eggnog cinnamon rolls…until THIS YEAR. And can I just say I’m regretting my life choices in not actually making these earlier?

How do you make eggnog cinnamon rolls?

Eggnog cinnamon rolls are similar to other yeasted cinnamon rolls, except the milk is replaced with eggnog. My version starts with an enriched dough, which is basically just a yeasted dough with butter, egg and eggnog in it. To make the dough you dissolve yeast in warmed eggnog. You can use homemade or store-bought eggnog. Then the liquid is mixed with some sugar, butter, egg. Knead in flour and the dough is done!

Let the dough rise and then roll it out. Spread the dough with a mixture of butter, brown sugar, cinnamon and nutmeg. Roll the dough up, cut out the rolls and place in a pan. Let it rise again and then bake! While it bakes, you make the cream cheese frosting with a dash of rum or bourbon (or apple juice or more eggnog if you’re not into alcohol). Spread the frosting after the rolls have baked and are still warm. Then serve!

Can I make the frosting for these rolls without alcohol?

Yes! You can totally leave out the rum or bourbon in the frosting. Instead, replace the alcohol with 1 tablespoon of eggnog, milk or apple juice/cider.

Can I make these overnight eggnog cinnamon rolls?

Absolutely YES! There are numerous ways to make this recipe easier for you and your schedule. Make the dough and instead of letting it rise initially, cover it with plastic wrap in a greased bowl and refrigerate it overnight.

The next day bring the dough back to room temperature (about an hour or two sitting on the counter, depending on how cold your kitchen is) and then let it rise until it has doubled in size (about another hour or two). Then proceed with the recipe as directed.

Or you can make the dough, let it rise, roll it out and spread the filling, and roll and cut the cinnamon buns and place them in the pan. Once they are in the pan, cover it with plastic wrap and refrigerate overnight! Again the next day you bring back to room temperature, and then let it rise until double in size, and bake.

You can even do both refrigeration steps, extending it into two days and allowing you to make the rolls at your convenience.

Can I freeze unbaked rolls?

Why yes, you can! If you’re the sort of person that plans stuff out in advance (not me) and has extra space in the freezer (definitely not me) you can TOTALLY make these rolls and then freeze them. Just follow the instructions all the way through to the rolling and cutting of the dough. Place them in the prepared pan, then cover it with plastic wrap tightly, and then with foil. If your pan has a lid, use that instead. Then freeze the entire thing!

To bake, just thaw the rolls overnight in the freezer and then let it come to room temperature the next day. Let it rise until the rolls are touching each other and the bake as directed!

How do I make these cinnamon rolls rise faster?

Because of the eggnog in the dough, these cinnamon rolls do rise a little slower than regular cinnamon rolls. If you want to speed up the rise time, you need to place the rolls in an environment that will help the yeast grow!

To do that you need a warm environment. You can place them in an oven with the light turned on. Or you can turn the oven on to 200°F (or the lowest temperature it will turn on to). Then, once the oven has started to warm up, immediately turn the temperature off. This will warm up the oven enough to help kick start the yeast growth. You can check the oven periodically (every 20 to 30 minutes or so) and if it too cold, repeat this trick by turning the oven on and then off again. Just remember to turn the oven off! If you leave it on, the rolls will bake without rising! Worse, you might melt the plastic wrap over the rolls, which will ruin the pastries, and make the pan difficult to clean (I know this from experience!).

Some new models of ovens (and toaster ovens) even have a “proofing” or “warm” setting. This is also an option to help speed up rise time.

But one of my favorite methods is to use hot water to help with the rise! Just boil some water, and pour it in a shallow bowl or pan. Place it on the lower rack of the oven and put the covered cinnamon rolls pan in the oven with it, on the top rack. The heat from the water will warm the oven and create a great environment for the yeast to grow. There’s no risk of forgetting to turn the oven off as well, so this is great for those busy folks that are multi-tasking. Just replenish the boiling water every so often. This keeps the environment warm.

How do I make the frosting for cinnamon rolls?

This recipes uses less sugar than a lot of other frostings, and is also thicker because it isn’t thinned with a lot of milk. Spreading it over the cinnamon rolls right out of the oven means the frosting will melt into a glaze, pooling into the crevices of the roll while being easy to work with.

How do I store these eggnog cinnamon rolls?

The best way to eat them is to eat them the day you bake them! But you can store them at room temperature on your counter, in an airtight container or under tight plastic wrap for up to 48 hours. Keep in mind the longer you keep them around, the less fresh they taste.

You can also extend the lifespan of cinnamon rolls by refrigerating them. They should last up to a week in the refrigerator, again stored in an airtight container or under tight plastic wrap.

Can I freeze baked cinnamon rolls?

Yes you can! Make sure the rolls are completely cooled to room temperature and then freeze them either in the pan or separate them apart, freeze them on a baking sheet until frozen (about 2 hours) and then store them in a large resealable freezer Ziploc bag. They can be frozen with or without the frosting!

Defrost the rolls on the counter, for about an hour or try microwaving one roll at 50% power for 45 to 60 seconds. Keep in mind that when you thaw the in the microwave, the frosting will get pretty melty.

If you like these eggnog cinnamon rolls, check out some of other breakfast pastries and treats! 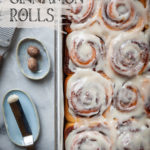 This eggnog cinnamon rolls were developed using grocery store bought eggnog. Keep in mind, because most grocery store eggnogs have stabilizers in it, the dough takes a little longer to rise. If you use a homemade eggnog or an eggnog that doesn’t have gums in it, the dough might rise faster, but otherwise the bake time and instructions will be the same. I’ve left some tips on speeding up the rise process in a section above. Just make sure to allow time for both rises.
Course Breakfast, brunch, Dessert, Snack
Cuisine American
Keyword alcohol, breakfast, brunch, cinnamon roll, eggnog, pastries, yeast
Prep Time 30 minutes
Cook Time 25 minutes
Rise Time 3 hours
Servings 12
Calories 503kcal
Author Irvin

This blog currently has a partnership with Amazon.com in their affiliate program, which gives me a small percentage of sales if you buy a product through a link on my blog. I only recommend products (usually cookbooks, but sometimes ingredients or equipment) that I use and love, not for any compensation unless otherwise noted in the blog post. If you are uncomfortable with this, feel free to go directly to Amazon.com and search for the book or item of your choice.
266shares