These soft and fluffy Rosemary Pistachio Cinnamon Rolls with Brown Sugar Cream Cheese Glaze are surprisingly easy to make with no kneading required! (Jump directly to the recipe.) 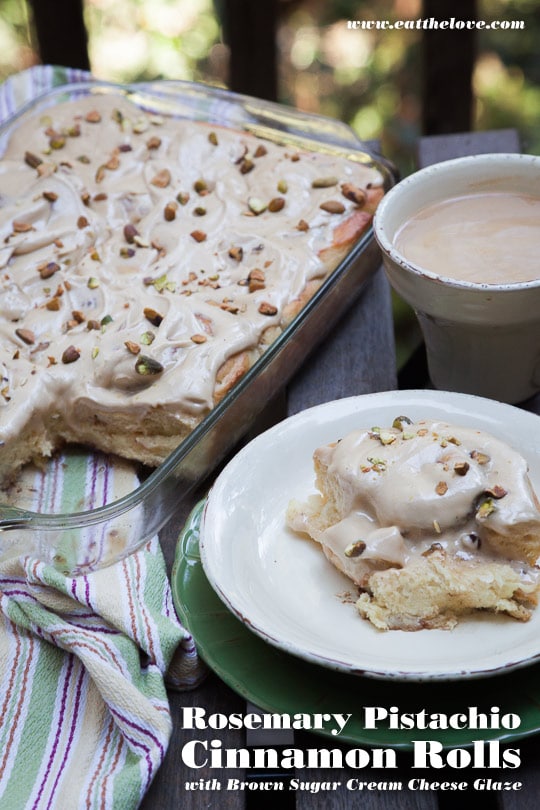 “So why did you use rosemary in the cinnamon rolls?” asked my friend Rita as I shared with her what I was working on, a blog post about my pistachio rosemary cinnamon rolls with brown sugar cream cheese glaze. It’s the sort of ridiculously over-the-top baked good that I have lately been drawn to making. I had made the recipe back in April but hadn’t gotten around to blogging about it. Rita was curious as to both why I hadn’t posted about it and also HOW I came up with recipe. 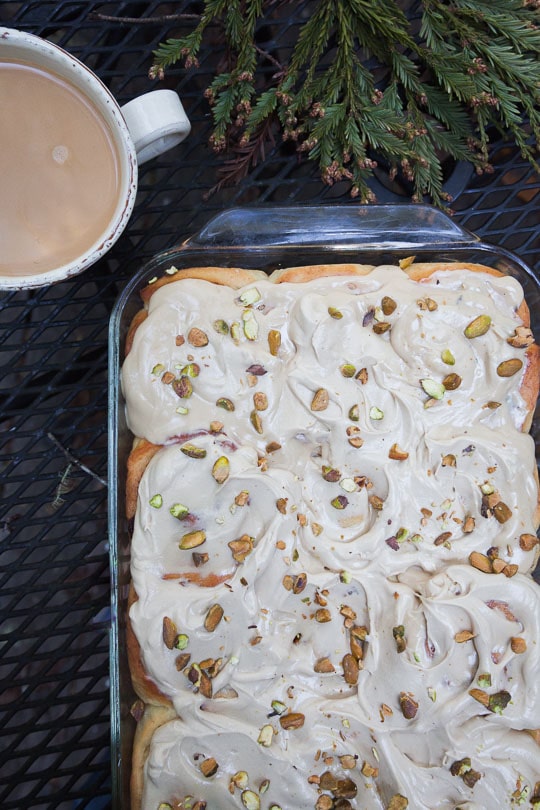 Folks occasionally ask me how I come up with a recipe and to be honest, when they do I don’t really know how to answer it. I can tell folks that I found inspiration from other recipes, from cookbooks, from my surroundings, but somehow it never seems to satisfy them. They want me to tell them some sort of secret to making recipes up as if there was a magic wand that I wave in the kitchen that conjures up delicious baked goods. If I lived in a Harry Potter world, maybe that would be the case, but sadly I am muggle without those powers. I’m influenced by nearly everything around me, including things that aren’t even food related and it’s just a lot of hard work and experimentation in the kitchen that leads to the recipes. 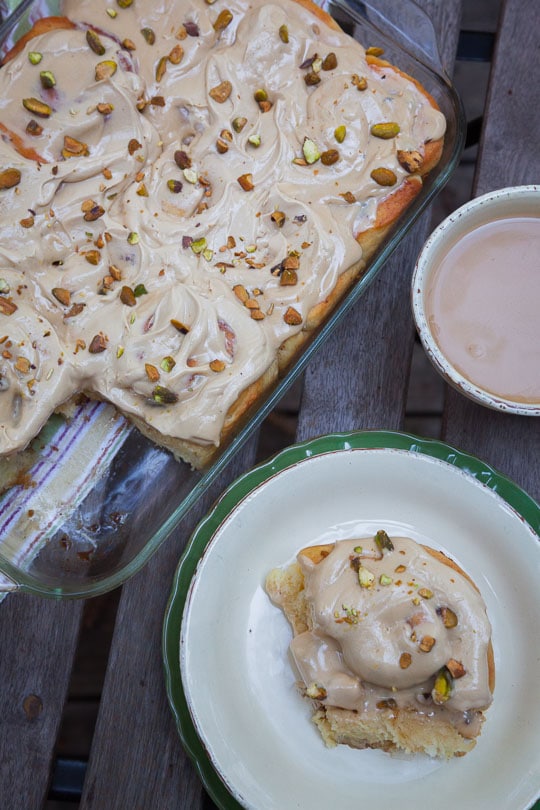 The pistachio rosemary cinnamon rolls are a perfect example of how I took my surroundings as inspiration. Thanks to our generous friends Peter and Grant who own a second home up in Sonoma on the coast, we were able to spend a weekend away at their place for a last-minute trip in April. It’s a gorgeous house nestled in the woods, with floor to ceiling windows, surrounded by giant redwoods, and two wraparound decks. It’s the sort of home that make me never want to leave. 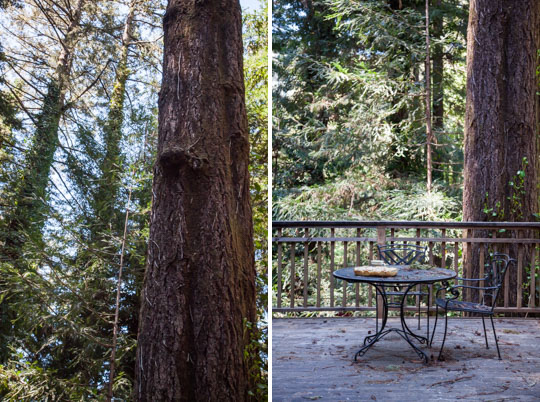 Waking up to the bright sunlight, surrounded by trees, slightly disconnected from the world in our friend’s house, was exactly what I needed to help sort of out some of the anxiety I was having of late. And it was the green leaves in the majestic redwoods trees that towered right outside the window that made me think of rosemary as a perfect addition to the cinnamon rolls. It might have also inspired me to add pistachios as well, though AJ really adores pistachios, so he’s probably a huge influence as well. 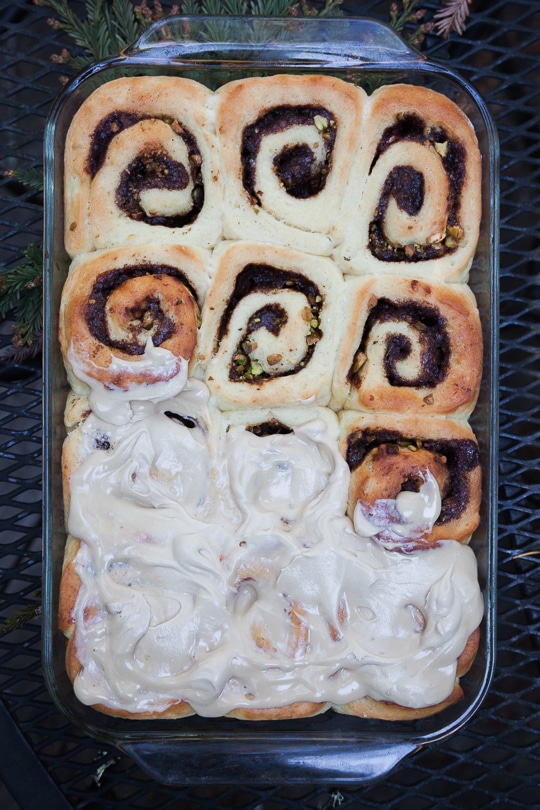 In the end, as I took another large bite of my cinnamon rolls in the house in the woods, I realize that I am exceedingly lucky. I have friends who are amazing and let us stay in their beautiful home in wine country. I have friends who are take an interest in my life so much that they want to know the minutiae of how I work and how I make up recipe. And I have AJ in my life, someone who I couldn’t do what I do without his support and love. And though my life is far from perfect, from what folks often see online via social media, it’s not as far off as it might seem. I mean, it led me to make these cinnamon rolls right? It can’t be all bad. 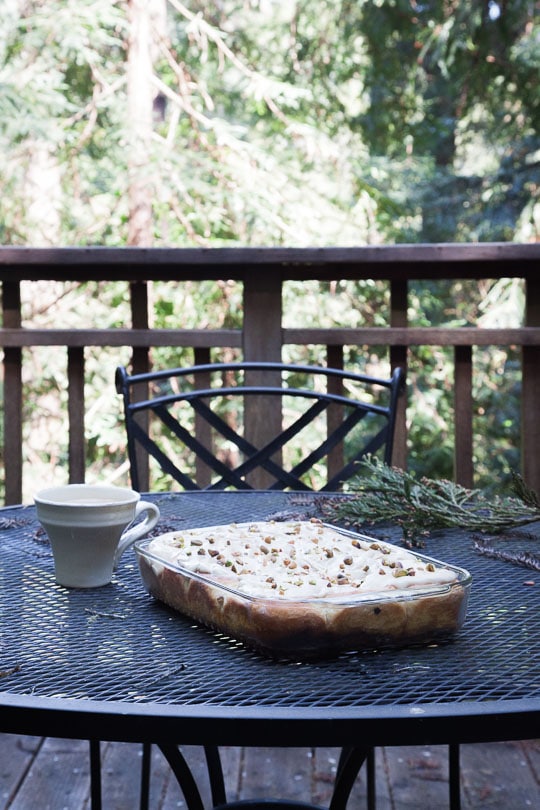 These tender and sweet yeasted cinnamon rolls are easy to make and require no kneading. The secret is a baked potato, which creates a soft and fluffy cinnamon roll! The rosemary in the filling may sound a little odd, but the savory woodsy note works well with the pistachio and adds an extra dimension to the sweet cinnamon filling. I refrigerated the dough overnight to make it easier for me to bake in the morning, but if you want to make them the same day, rest the rolls in the fridge for 2 hours ahead of baking and allow for the extra hour of rise time afterwards. 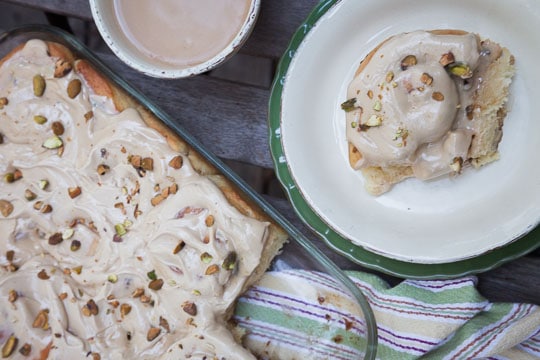 Directions
1. Peel and dice the potato into 1/2-inch chunks. Place in a small saucepan along with the milk. The milk should just barely cover the potatoes. Bring to a bare simmer and cook uncovered until the potato is completely tender and falling apart about 10-15 minutes.

2. Remove from heat and mash the cooked potatoes in the pan with the remaining potato liquid until it is a smooth puree. Add the stick of butter and stir until the butter is melted and incorporated. The potato puree should cool off a bit from the butter but still be warm. Stir in the sugar and salt. Let cool in the pan for 5 to 10 minutes until lukewarm to the touch.

3. Stir the yeast into the warm water until it is dissolved and set aside. Once the potato puree is lukewarm, add the eggs and stir to incorporate. Scrape the yeasty water into the eggy potato puree and stir in.

4. Place the flour in large bowl and make a well indention in the middle of the flour. Scrape the potato puree into the middle of the flour. Using a wooden spoon stir until all the wet and dry ingredients are incorporated. You might need to use your hands in the end to massage and work all the dry ingredients into the dough but you shouldn’t have to knead the dough too much. The dough will be soft, sticky and slightly moist.

5. Remove the dough from the bowl and spray the bowl with cooking oil. Then place the dough back in the bowl and cover with plastic wrap. Place in the refrigerator to rest for a minimum of 2 hours or preferably overnight. The dough will rise slightly.

7. Once the dough has rested, scrape the dough on to a clean surface generously dusted with flour. Roll the dough out to a 12 x 16-inch rectangle, with a long side facing you (in landscape orientation). Mix all the filling ingredients together with a fork in a medium bowl. Evenly sprinkle the top of the dough with the filling ingredients, leaving ½-inch plain dough at the top of the rectangle. Roll the dough tightly from the bottom to the top, pinching the border of plain dough at the edge of the bottom of the roll to seal it. Cut the dough into 12 pieces. Place the pieces in the greased baking pan forming a grid of 3 by 4 pieces. The rolls won’t be touching but that’s OK.

8. Cover the baking pan with plastic wrap and let site in a warm place (like the sun) for 1 hour to rise. The rolls should double in size and look puffy. About 20 minutes before the rolls are ready, preheat the oven to 350˚F.

9. Once the rolls have risen, bake in the oven for 25 to 35 minutes or until the middle of the rolls are golden brown. Let cool in the pan for 30 minutes. The rolls will still warm.

10. While the rolls are cooling, make the glaze by placing the cream cheese, butter, sugar and salt in a medium bowl and beating together with a hand mixer until well blended. Once the rolls have cooled a bit (but are still a bit warm) spread the glaze over the top of the rolls. Sprinkle with the chopped pistachios. Serve immediately.

This blog currently has a partnership with Amazon.com in their affiliate program, which gives me a small percentage of sales if you buy a product through a link on my blog. I only recommend products (usually cookbooks, but sometimes ingredients or equipment) that I use and love, not for any compensation unless otherwise noted in the blog post. If you are uncomfortable with this, feel free to go directly to Amazon.com and search for the book or item of your choice.
145shares