This Chocolate Waffles Recipe with Swirled Vanilla Batter baked right in is easy to make and sure to impress! (Jump directly to the recipe.) 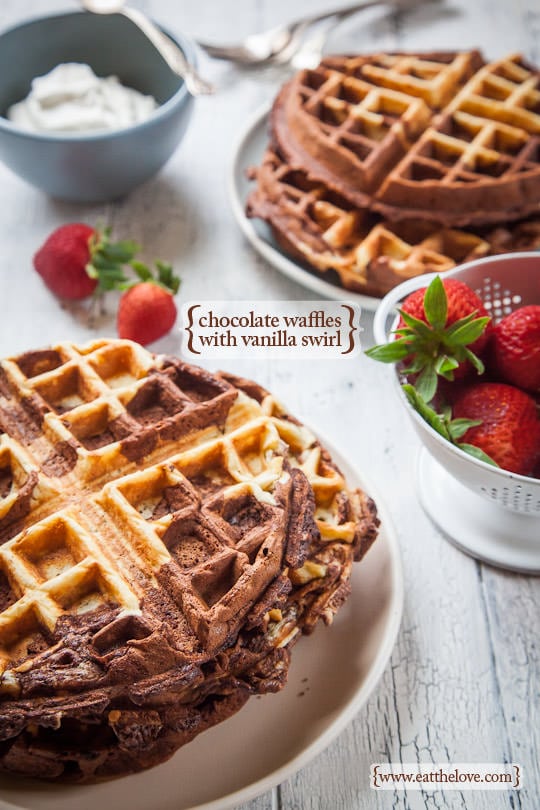 I’m not going to outright say that I am anti-Valentine’s Day because then I get pegged as one of those crabby bitter folks that hates love, puppy and adorable children wearing penguin costumes. Nor do I want be the guy that professes to hate how “commercial” the holiday is. You know the rant, how it’s a made-up holiday that forces people to run around and buy needless things for each other. I’ll save that particular grievance for Sweetest Day, a purely fictional holiday that is mostly celebrated in a region of the US that I don’t live in anymore. Instead I will fully admit to the fact that I am relatively apathetic towards Valentine’s Day, and everything that is involved with it; thankfully AJ is too. Of course that doesn’t mean I’m immune to the excuse to make something chocolate – which, according to my Pinterest feed, is what people do for Valentine’s Day. Enter my Chocolate Waffles Recipe with Vanilla Swirl. The easiest way to impress a loved one, regardless of the time of year. 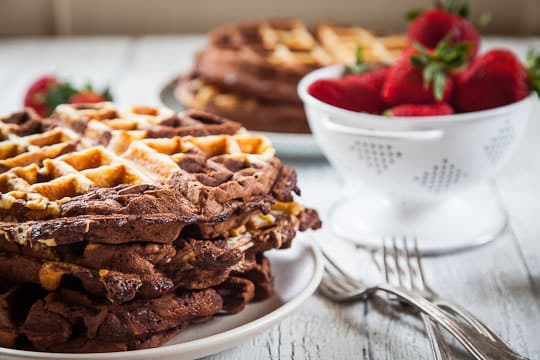 Now homemade waffles are probably one of those things that pretty much impress anyone, truth be told. My own experience with waffles growing up were pretty much limited to the frozen kind that you popped into a toaster. I wasn’t the only one. My friend Ruben was obsessed with frozen waffles, with boxes of them in his freezer. He had a specific method of toasting them and then generously pouring the syrup all over the waffle then the plate itself. He once confided in me that he felt the plate needed to be seasoned with a healthy moat of syrup as well as the waffle itself. I can completely understand that sentiment. 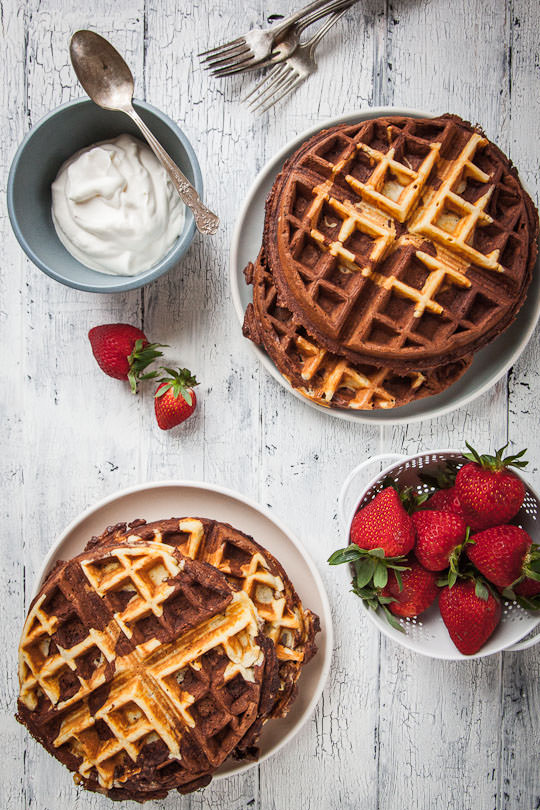 But here’s the thing with these chocolate waffles with vanilla swirl, you can serve them for breakfast or you can serve them as dessert. Totally versatile, they’re the perfect food. And because they’re made with chocolate, you don’t necessarily need to douse them in syrup. I personally add some lightly sweetened whipped cream and some fresh fruit on them, along with a tiny drizzle of maple syrup. But if you serve them for dessert, a healthy scoop of vanilla or chocolate ice cream would be pretty awesome too. And though I don’t talk to my friend Ruben much anymore, I think he would approve. 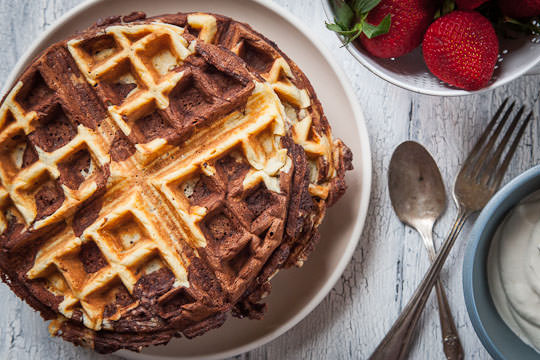 Though they look like they might take some time to make, waffles from scratch aren’t that difficult to make. Don’t be scared by the “marbling” that I do with the vanilla and chocolate batter. Obviously I’m a fan of marbling and swirling different batters (I’m writing a whole cookbook about the subject) but I’ll walk you through the steps on how to do it in the recipe below. It’s fairly straightforward and definitely looks more impressive than the effort involved. By the way, the addition of the cornmeal is for texture and crunch. If you don’t have any on hand, you can leave it out. 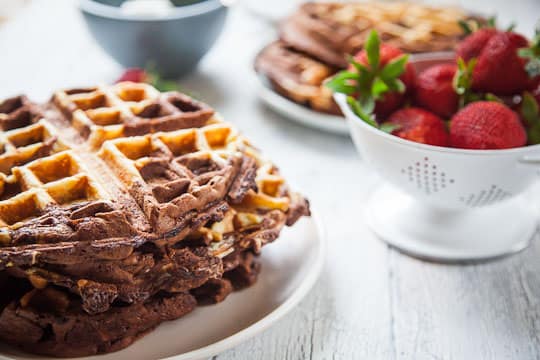 Directions
1. Place the flour, cornmeal (if using) sugar, baking powder, baking soda, and salt in a large mixing bowl. Place the egg yolks, 1 1/2 cups of the whole milk (saving 1/2 cup for later), melted butter and vanilla extract in a medium bowl and beat to blend.

2. Place the egg whites and the cream of tartar in the bowl of a stand mixer fitted with a wire whisk and beat until stiff peaks form. Make a well in the middle of the dry ingredients and add the milk mixture in the middle. Stir with a rubber spatula by hand until the ingredients are blended (but try not to overmix). Add the egg whites and fold until they are incorporated (draw the spatula down sideways, and lift up flat “folding” the batter over the egg whites, repeating until they are blended in).

3. Scoop out 1 1/2 cups of the batter and reserve it in a glass measuring cup with a spout. Place the remaining 1/2 cup milk, cocoa powder and dark brown sugar in another bowl and whisk until blended (feel free to use the egg white bowl without cleaning it – that’s what I did). Add the chocolate mixture to the remaining waffle mixture and stir with a rubber spatula by hand until blended.

4. Heat your waffle iron according to the instructions. Once heated, drizzle 3-4 tablespoons of vanilla batter over the iron, then immediately pour the recommended amount of chocolate batter over it. Cook until done and repeat with remaining batter. Place finished waffles on a baking sheet in the oven turned to 200˚F if you wish to keep warm. Serve with slightly sweetened whipped cream, fresh fruit, maple syrup or ice cream of your choice. 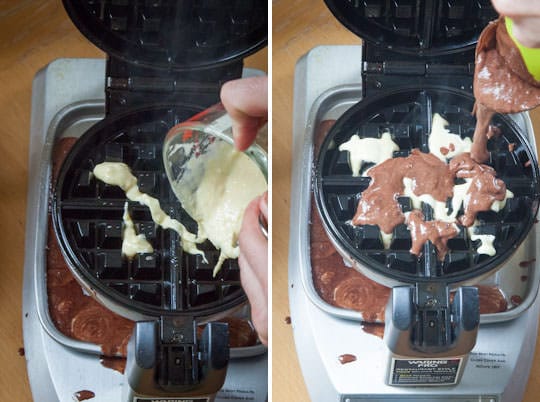 If you like these chocolate waffles, check out my recipe for:
Quinoa Goat Milk Belgian Waffles

This blog currently has a partnership with Amazon.com in their affiliate program, which gives me a small percentage of sales if you buy a product through a link on my blog. I only recommend products (usually cookbooks, but sometimes ingredients or equipment) that I use and love, not for any compensation unless otherwise noted in the blog post. If you are uncomfortable with this, feel free to go directly to Amazon.com and search for the book or item of your choice.
6706shares