This eggnog cheesecake recipe with gingersnap crust will make even the ardent eggnog hater fall in love with the classic holiday drink. (Jump directly to the recipe.) 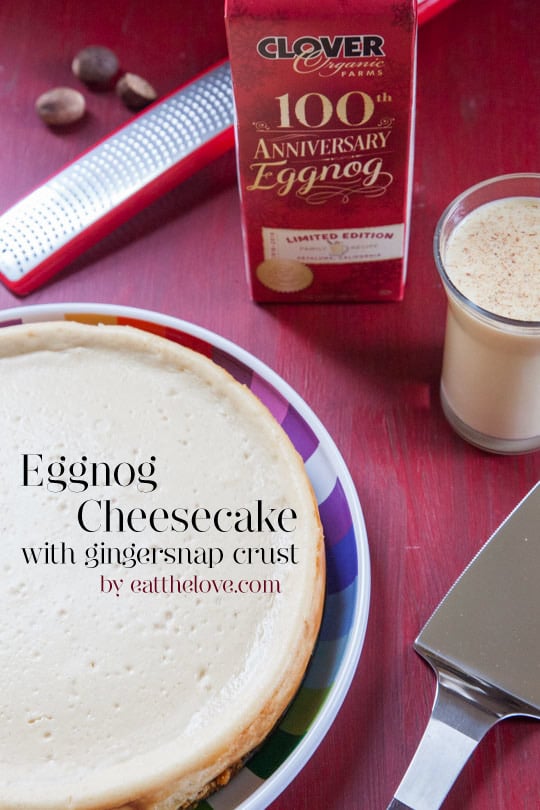 This post was sponsored by Clover Stornetta Farms. I was compensated fort his post and for developing the recipe. However all opinions below are my own.

“So did you grow up with eggnog?” I asked AJ right before I bought a carton of Clover’s organic anniversary eggnog. He kind of shrugged and said “not really” and wandered off to get some coffee beans. I’ve been late to the eggnog train as well, not really having it growing up. For whatever reason I thought AJ would be one of those eggnog folks. After all, he is a white boy from the Midwest. But me, as an Asian-American, eggnog was a completely foreign treat. Once I had a taste of it though, I was pretty hooked. So when Clover approached me with an opportunity to work together, I knew exactly what I wanted to make with their products, an eggnog cheesecake with gingersnap crust. 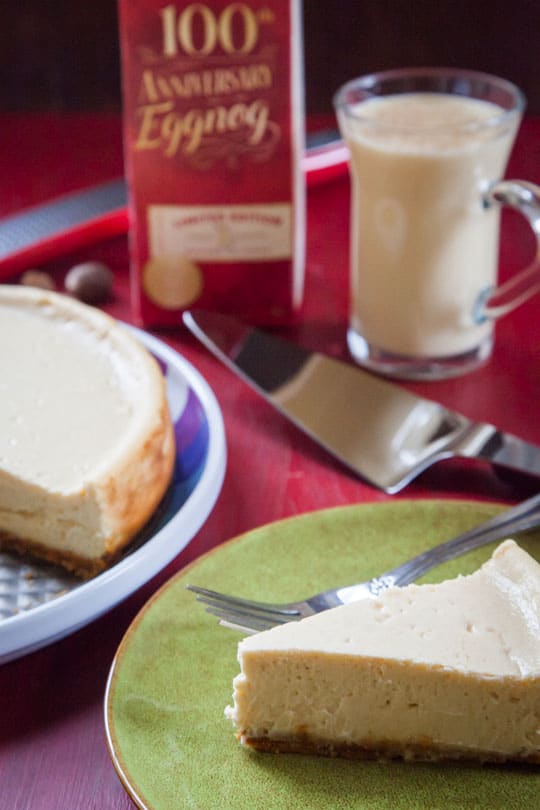 We go through an extraordinary amount of dairy here in my apartment. There’s my insane butter consumption, mostly due to my recipe development (I usually have somewhere between 10-12 pounds of it in the fridge and I start to get nervous if I drop to 2 or 3 pounds). There’s the large amount of milk and cream that we have (cream for AJ’s coffee habit, milk for his steelcut oats habit). And then there’s the other various dairy, including yogurt, cheese, ice cream and bricks of cream cheese. It can get a little out of hand, but at least we don’t have to worry about getting our daily amount of calcium. 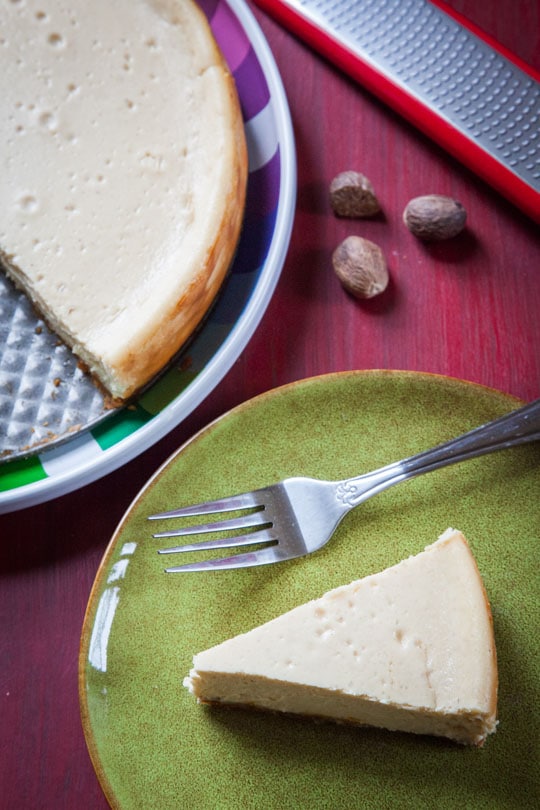 Though I always appreciate a healthy spike of rum or bourbon in my eggnog, I also realize that eggnog is a pretty awesome substitute for dairy in baked goods. Want to make a holiday version of pancakes? Sub out the buttermilk for eggnog. Want make an easy Christmas cookie?? There’s always eggnog cookies! Trying to Christmas-fy those muffins or coffee bread? Eggnog to the rescue! And, of course, if you want to go all out and embrace eggnog for what it is, eggnog cheesecake is the answer. Once AJ took a bite of the cheesecake his eye lit up and I knew that even though he didn’t grow up with eggnog like me, we are going to have a carton of eggnog in the house every holiday season from this day forward. 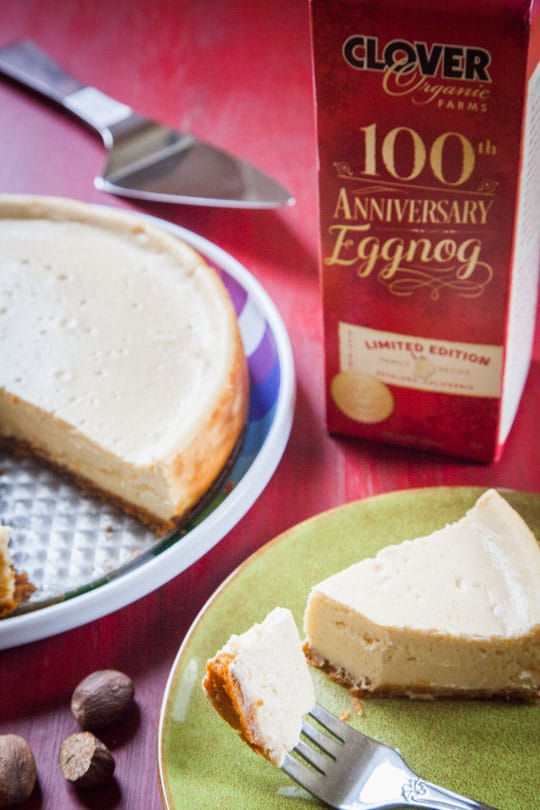 I’ve partnered with Clover to bring you recipes using Clover Organic Farms Dairy Products. You can contribute your own recipes to the Clommunity Cookbook by adding the hashtag #CloverCooks to any social media share of recipes you make. I was compensated for this post and for developing the recipe. However all opinions above are my own and not endorsed by Clover.

This eggnog cheesecake is the perfect holiday dessert. The boozy rum mellows out a bit when you bake it (but there’s enough to still notice it with each bite). The addition of a few spice like nutmeg, ginger and cinnamon along with the vanilla add a nice complexity to the cheesecake. Feel free to substitute the same amount of graham crackers for the gingersnaps cookies if you prefer. 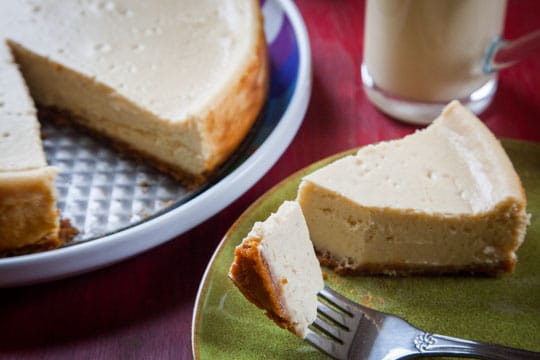 Directions
1. Preheat the oven to 325ºF. Spray a 9-inch springform pan with cooking oil. Place on a rimmed baking sheet.

2. Place the gingersnap cookies in a food processor or a blender. Pulse until crumbs form. Add sugar and butter to the bowl of the processor and pulse until it starts to clump together into a sandy mass. Dump into the middle of the springform pan and press down evenly with your fingers or the flat bottom of a glass until there is an even crust at the bottom of the pan. Bake in the oven for 10 minutes.

3. Remove from the oven and increase the heat to 425ºF. Let the crust cool while you make the filling.

4. Place the cream cheese, sugar and flour in the bowl of a stand mixer fitted with the paddle attachment. Cream the ingredients together until there are no more lumps. Add the eggs, one at a time, making sure the first one is incorporated before adding the second one. Add the eggnog, rum, vanilla and spices and beat to incorporate.

5. Pour the filling into the pan, over the cooled crust, and return to the oven. Bake for 10 minutes, then reduce the heat of the oven to 250ºF (do not open the oven). Bake for 40 to 45 minutes or until the center of the cheesecake just barely jiggles. Remove from oven, and carefully run a thin knife around the sides of the cheesecake. Let cool to room temperature before covering and letting chill in the refrigerator for at least 4 hours or overnight. 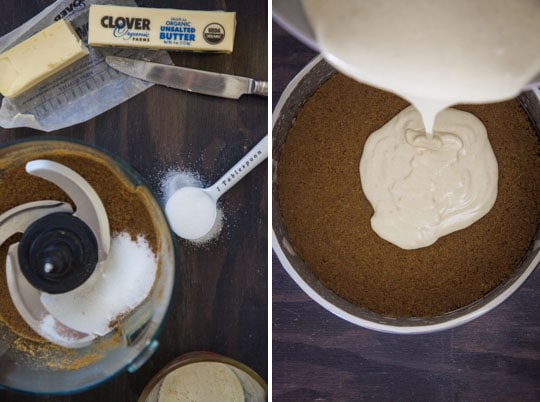 This blog currently has a partnership with Amazon.com in their affiliate program, which gives me a small percentage of sales if you buy a product through a link on my blog. I only recommend products (usually cookbooks, but sometimes ingredients or equipment) that I use and love, not for any compensation unless otherwise noted in the blog post. If you are uncomfortable with this, feel free to go directly to Amazon.com and search for the book or item of your choice.
273shares