These easy-to-make Pumpkin Cheesecake Brownies get their striking graphic look from Dutch Processed cocoa powder in the recipe!

Every time I think of pumpkin and pumpkin recipes like my pumpkin chocolate bread, pumpkin chess pie, pumpkin pie cheesecake bars, and pumpkin chocolate chip cookies I think of my old two-story house in the suburbs of St. Louis. I was in the third grade when my dad yelled at me for leaving the jack-o-lantern out on the front porch for too long. I believe it was my responsibility for cleaning it up, but instead of throwing it out, I just let it sit there, way past Halloween into mid-December, rotting away.

Finally, my dad, in a fit of disgust, took our rusted dirt shovel, scooped up the barely intact shell of a gourd, and tossed it beside our house into the strip of lawn between our house and our neighbor’s house. He figured it would compost down into the ground and by the time the snow thawed, no one would ever know. To all our surprise, the following September we had a pumpkin vine growing next to our house that grew pumpkins…until my dad finally dug it up and threw the vine away with an air of finality. We bought our pumpkin from the stores, not grew them next to our suburban house. I still think of that pumpkin vine when I use pumpkin in my kitchen, like when I made these Pumpkin Cheesecake Brownies.

As the air starts to get more brisk and the great outside seems to come into focus with just a little bit more clarity than the hazy summer, the world seems to become obsessed with pumpkin. I’m sure this happens every year around now, but with social media and the ubiquitous internet it all seems ALL. PUMPKIN. ALL. THE. TIME. Friends with their children are at a pumpkin farm, sitting on gourds larger than doghouses. People are instagramming their carved pumpkins that look adorable but I keep on wondering if those pumpkins will last until Halloween. And commenters seem REALLY upset when a friend of mine shared her recipe for homemade pumpkin spice latte on Huffington Post (apparently some people love to go and buy them, not make them at home!).

But none of that deters me when it comes to baking with pumpkin. The combination of pumpkin and chocolate seems a bit odd at first, though I certainly skirted around it a bit last year when I made my white chocolate pumpkin cheesecake bars and my white mocha pumpkin frappuccino. But, as everyone knows, white chocolate isn’t REAL chocolate. Besides, using dark chocolate gives the brownies a nice Halloween feel to the bars, which I have to admit is pretty fun all the way around.

These brownie pumpkin cheesecake bars are surprisingly easy to make and if you don’t want to do a “spider web” pattern on top, it’s even easier. I’m just a little Halloween obsessed right now so I decided to embrace it. I may not have a homegrown pumpkin vine in my yard, but that’s OK. I have these brownies and there’s no way I’m going to leave these to sit around until December. I’m eating them right now.

Do I need to refrigerate Pumpkin Cheesecake Brownies

Though you can store pumpkin cheesecake brownies at room temperature overnight (there’s enough sugar in them to prohibit bacterial growth) I recommend storing the homemade pumpkin cheesecake brownies in an air tight container in the fridge. Just layer them between pieces of parchment paper or wax paper to prevent them from sticking. Store them in the refrigerator extends their life for up to 5 days.

You can totally freeze these pumpkin brownies. Place them on a baking sheet in the freezer for 2 hours, until they are frozen solid. Then move them to an air tight container or a resealable ziploc bag. Place a piece of parchment paper or wax paper between layers to ensure they don’t stick as they thaw out.

To thaw, just leave them at room temperature for 1 to 2 hours (depending on how warm your kitchen is). Or thaw them overnight in the refrigerator.

If you like these pumpkin cheesecake brownies, checkout these other brownie recipes:

Updated October 25, 2019: I have updated this recipe formatting and cleaned up a bit of this blog post, but the recipe is the same from the original October 14, 2013 publication. 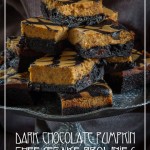 There are two secrets to these brownies that make these the best pumpkin cheesecake brownies. One, make sure to cook down the pumpkin puree from the can, concentrating the pumpkin flavor. You can certainly skip this step and just use 1 cup of the pumpkin puree from the can but the resulting brownie won’t look as orange and it won’t taste as pumpkin-y. Two, use Dutch processed cocoa. You can find it online but most grocery stores carry Hershey’s Special Dark cocoa which works fine for this recipe. You’ll get a deeper more bitter chocolate taste to the brownies as well as a lovely rich black color that’s a great contrast to the orange pumpkin cheesecake. If the “spiderweb” pattern seems too fussy for you to make, just drizzle the reserved brownie batter over the cheesecake batter in a random pattern and swirl with a butter knife or toothpick.
Servings 24
Calories 255kcal
Author Irvin

This blog currently has a partnership with Amazon.com in their affiliate program, which gives me a small percentage of sales if you buy a product through a link on my blog. I only recommend products (usually cookbooks, but sometimes ingredients or equipment) that I use and love, not for any compensation unless otherwise noted in the blog post. If you are uncomfortable with this, feel free to go directly to Amazon.com and search for the book or item of your choice.
4689shares