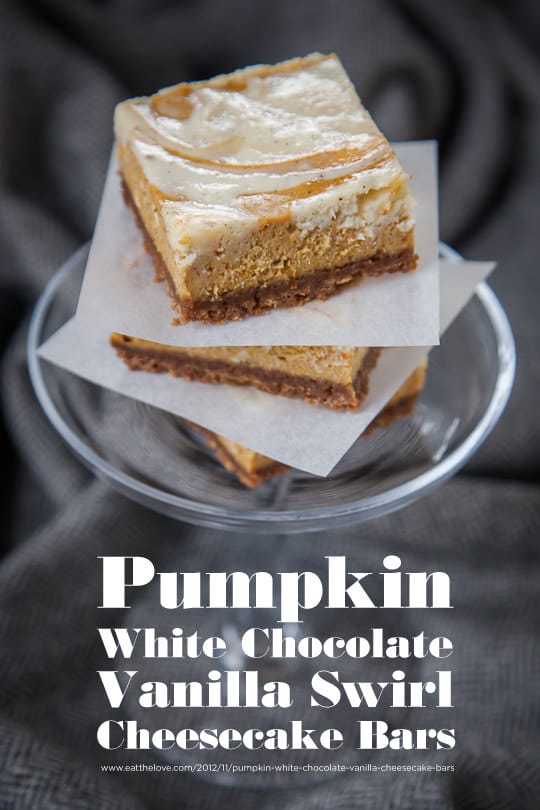 “So…do you have any holiday recipes up? Because I have the best pumpkin pie recipe!” said the volunteer at the San Francisco and Marin Food Bank that I was photographing for my most recent Photo Essay. I sighed internally. This is always the problem with having a food blog. Everyone expects you to have a seasonal recipe up and as much as I love pumpkin pie, I posted one of my favorites recipes for it last year and I don’t have much drive to post another this year. I told the volunteer that I currently had a chocolate cake recipe up, but I plan on having something pumpkin next week. She seemed satisfied with my answer, but I couldn’t really tell. That’s ok though. If she could taste these pumpkin pie cheesecake bars with white chocolate vanilla swirl, she’d be pretty darn happy. I know I am. 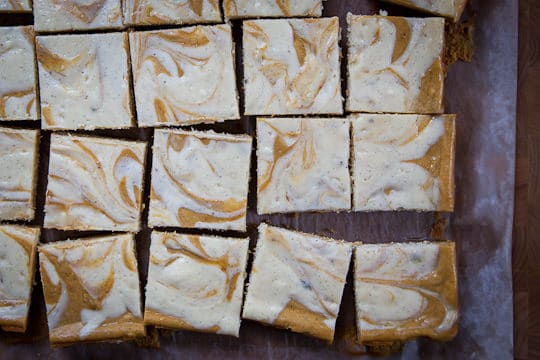 It’s always a tough thing when you have a large group of people coming over for Thanksgiving dinner (or any dinner for that matter). Buffet style is how I roll when it comes down to it, but serving pumpkin pie for a large group can be hard. Usually it means I make two or three pumpkin pies, and that means I make more than one type of pumpkin pie. But that also means that those ambitious folks who want to taste everything, end up taking a slice of each pie, thus defeating the purpose of making multiple pies. 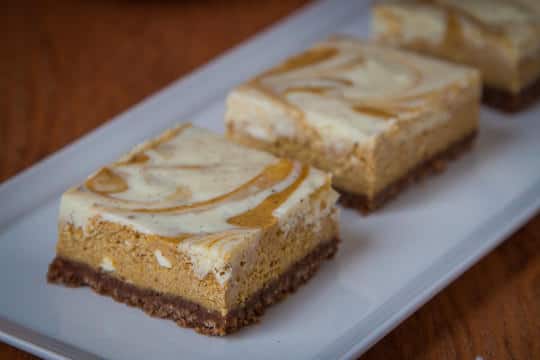 Of course, I could make several of the same sort of pumpkin pie, but in the end, I usually go with a selection of desserts for that special dinner, the classic pumpkin pie, usually a pear or apple pie, a cake of some sort for those who don’t like pie (crazy folks!) and maybe something else as well, depending on how I’m feeling. Luckily the desserts are fairly easy to make ahead of time and in the case of pumpkin pie and such, they actually need to be made ahead so they can set up. 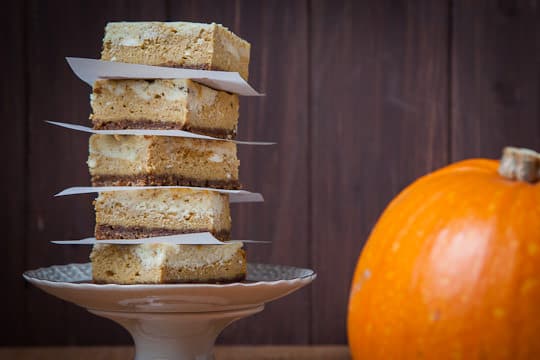 Of course the classic pumpkin dessert, besides the ubiquitous pie, is the pumpkin cheesecake. I’ve made them before, but this time I decided to give it a bit of twist, adding a swirl of white chocolate and vanilla bean to the filling. Not only does it add a touch of whimsy and elegance, but the contrasting Autumnal spices of cinnamon, ginger, nutmeg and allspice that I use in the pumpkin part is totally complimented by the sweet vanilla scented white chocolate swirl. It’s a great combination, and, as an added bonus, is easy to eat out of hand. Making this dessert awesome for a holiday buffet, or pretty much anytime now that I think of it.

These cheesecake bars take a little bit of time to make, mostly because I want to give the pumpkin part of the cheesecake the most flavor. To do that, I cook the pumpkin puree down to concentrate the flavor, as well as add a bay leaf to the puree as I cook it, helping to give it a true Autumnal aroma. Adding the spices to the hot puree also helps release their flavor, making them sing in the cheesecake. Just be sure to use pumpkin puree and not pumpkin pie filling in this recipe. Finally, as an added zing, I used speculoos cookies, which are a Dutch holiday spice cookie. The most common brand here in the United States are under the name Biscoff, but if you can’t find them, gingersnap cookies will work just as well. 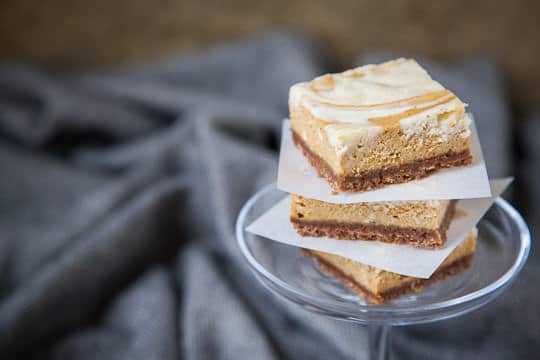 Directions
1. Preheat the oven to 350˚F. Spray a 9 x 13 inch pan lightly with cooking spray, and then fit a piece parchment paper in the pan. Make the crust by crushing the cookies in a food processor, pulsing until the cookies are crumbs. Add the brown sugar and salt and pulse a few times to blend. Turn the processor on and drizzle the melted butter into the processor. Once all the butter is added, pulse the processor on and off until incorporated properly. Dump the crumbs into the lined pan. Distribute and press the crumbs with your hand to evenly spread over the bottom of the pan. Bake in the oven for 7-8 minutes, or until the crust smells fragrant and the edges of crust are have browned. Once baked, let cool on a wire rack and reduce the heat of the oven to 300˚F.

2. While the crust is baking, place the pumpkin puree and the bay leaf in a medium size pan. Cook the puree on medium heat, stirring constantly until the puree has reduced to 1 cup (roughly 10 minutes or so). Discard the bay leaf and stir in the maple syrup and spices. Let cool while making the cheesecake filling.

4. Melt the white chocolate by placing it in a metal bowl, over a pot of simmering water. Once melted, remove the bowl from the pot, let it cool for 1 minute and add 1/3 of the cheesecake batter. Split the vanilla bean lengthwise and scrape the seeds from the inside of the pod into the batter. Stir to incorporate the white chocolate and vanilla.

5. Add the cooled pumpkin puree to the remaining cheesecake batter and turn the mixer on to medium speed to incorporate. Once blended and uniform in color, scrape the batter onto the cookie crust and spread evenly with a butter knife or offset spatula. Spoon the white chocolate batter on top of the pumpkin puree in 12 individual spots. Using a butter knife, decoratively swirl the batters together by making figure 8 motions with the knife in the batter. Make sure that you reduce the oven to 300˚F (if you didn’t, reduce it now and let the oven temperature regulate before baking the cheesecake). Bake the bars for 30 to 35 minutes or until the edges of the cheesecake starts to look dry and golden but before it starts to crack. Let cool on a wire rack to room temperature, cover with aluminum foil and refrigerate for at least two hours or overnight. Cut the bars by lifting the parchment paper straight up from the pan and moving the entire pan of cheesecake to the cutting board.

This blog currently has a partnership with Amazon.com in their affiliate program, which gives me a small percentage of sales if you buy a product through a link on my blog. I only recommend products (usually cookbooks, but sometimes ingredients or equipment) that I use and love, not for any compensation unless otherwise noted in the blog post. If you are uncomfortable with this, feel free to go directly to Amazon.com and search for the book or item of your choice.
6079shares