Looking for a fabulous pumpkin pie or tart recipe that is slightly different but not too oddball? Try this amazing Pumpkin Chess Pie Tart recipe! (Jump directly to the recipe.) 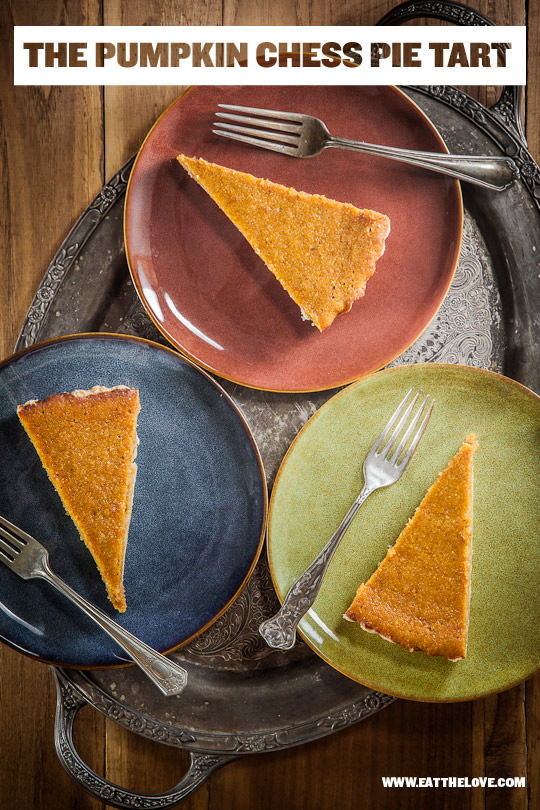 “So what’s a chess pie?” asks pretty much anyone I know who grew up north of the Mason-Dixon line when confronted with the particular dessert. Granted I’m not a true southern boy (St. Louis, Missouri definitely has some culturally southern aspects to it, but not really the true south if you ask me). But immediately after college, working a dead-end job at a non-profit art gallery, I was introduced to the wonders of chess pies by a coworker of mine. It quickly became an obsession. This can only be the explanation of how I found myself inspired to make a pumpkin tart in the form of a pumpkin chess pie for Thanksgiving this year instead of the regular old pumpkin pie. Pumpkin Chess Pie Tart FTW! 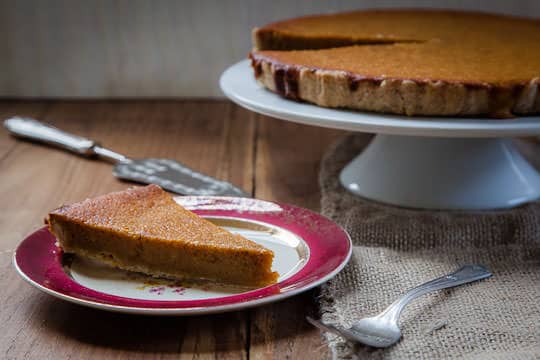 For those who haven’t been introduced to the pleasures of chess pie, it’s a plain sweet custard pie that has been baked (as opposed to those custard pies where the filling is made on the stove and then poured into the pie shell). The one major distinction between a custard pie and a chess pie is the addition of cornmeal that adds a really lovely subtle texture to the pie. The large number of eggs adds a wonderful richness to the filling and the large amount of sugar in the recipe gives the pie a signature caramelization on top after it bakes. But one thing that all chess pies have in common is how insanely easy they are to make. Well, insanely easy to make normally, I’ve been known to make super complicated chess pies; don’t be like me. 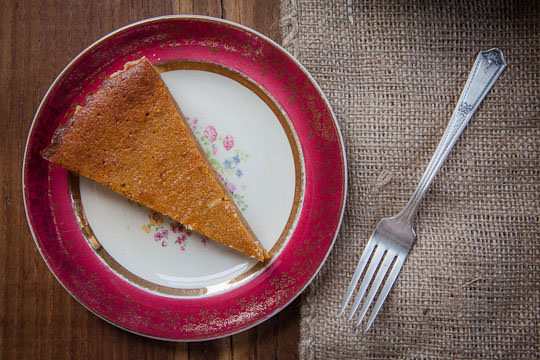 However, this pumpkin chess pie tart is a different story. Easy to make, it is both comforting in its familiarity but a nice change of pace from the regular pumpkin pie with pumpkin spice that most people serve for the holidays. The crust itself is easy-peasy when made with vodka (a trick I learned from Cook’s Illustrated, just use cheap vodka, no need to waste the good stuff!). The tiny addition of balsamic vinegar to the filling adds an elusive hidden depth to the entire dessert, something most people won’t be able to place right away. It sounds odd but don’t skip it. Trust me on this one. 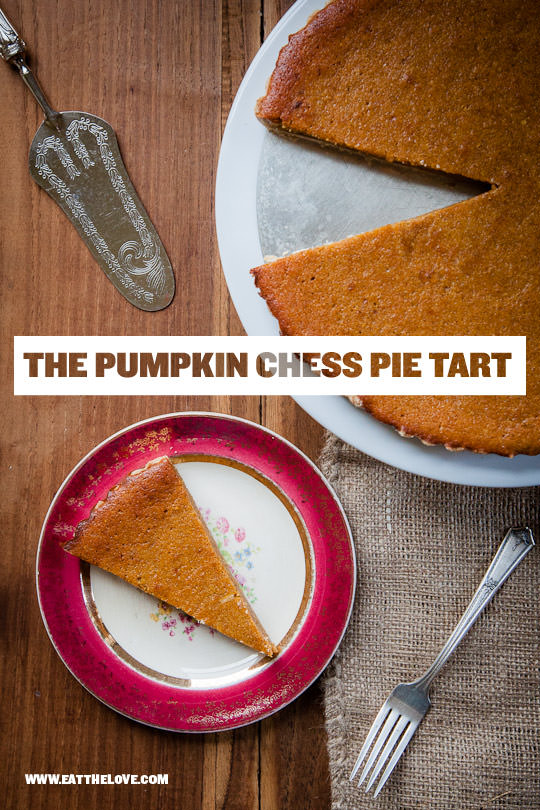 Chess pie is similar to vinegar, sugar or custard pies with the addition of a little cornmeal to give it texture. Stories range on why it’s called chess pie. Some say it’s a bastardization of the age old question “What sort of pie is that?” The response of “it’s just pie” slowly morphing into “it’s chess pie.” Other people say it’s an evolution of storing the warm pies in a pie chest, a specific piece of furniture popular in the south that is used to cool pies (man I wish I lived in a culture where there were specific pieces of furniture designed just to cool cakes and pies!). The resulting cooling pie was a “chest pie”, or “chess pie” as the phrase evolved. Either way though, the simple and easy to variation of pumpkin pie is a familiar but slightly different dessert, perfect for Thanksgiving.

I opted to use a 10-inch tart pan with a removable bottom because the filling for chess pie is sweet and I wanted a higher crust to pie filling ratio. But if you like your pies sweet, feel free to make it in a regular 9-inch deep-dish pie pan. If you do bake it in a pie pan, you should to lower the temperature that you bake the pie to 375˚F and extend the bake time by 10-15 minutes. Finally, if you find cooking down the pumpkin puree fussy, feel free to skip that step and just use the pumpkin puree straight from the can. Just be forewarned that the pie won’t taste as “pumpkin-y” nor will it be as deep orange as mine. 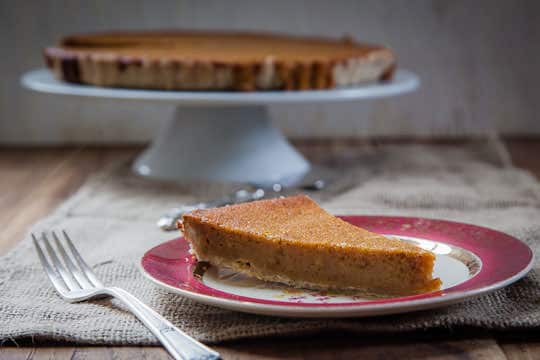 Directions
1. Make the crust by first placing the flours, sugar and salt in a large mixing bowl. Cut the butter into 1/4” square cubes. Sprinkle the cubes over the flour, and then, using your hands, toss the cubes with flour, coating them with the flour. Then, using your hands again, squeeze the cubes of butter flat, until all the butter has been flattened. Then start rubbing and squeezing the flour and butter together, until the ingredients start to clump together.

2. Sprinkle the water and 2 tablespoons of vodka over the dry flour butter mixture and toss with a fork until it clumps together into a dough. If the dough seems dry or there are dry ingredients still left, sprinkle the remaining 1 tablespoon of vodka over it. You want the dough to be a little more moist and easy to work with than dry and falling apart. Gather the dough together and flatten it into a 1/2” thick disk. Wrap tightly with plastic wrap and do the same with the other half of the dough. Place in the refrigerator for half and hour. Once the filling has chilled roll it on a well floured surface to a 12 inch circle. Fit the dough into the tart pan and put back in the fridge for another 15 minutes. While the tart pan if chilling, preheat the oven to 425˚F.

3. Once the crust has chilled, take the tart pan and prick the bottom of the crust with a fork all over. Cover the tart crust with parchment paper or aluminum foil, making sure the paper/foil goes over the edges of the pan. Place the pie weights, uncooked rice or dry beans on top of the paper/foil to weigh it down. Place the tart pan on a rimmed baking sheet and place in the oven for 15 minutes. Once the 15 minutes are up, take the tart shell out of the oven, carefully remove the paper/foil with the pie weights/rice/beans on it and move them to a bowl. Return the crust (uncovered) to the oven for additional 3 minutes or until the crust looks dry. Remove from the oven and maintain the temperature at 425˚F.

4. As the tart shell pre-bakes, make the filling by first cooking down the pumpkin puree (if you are doing that-see headnote). Scrape out the entire can of pumpkin into a large skillet and add the fresh bay leaf to the puree. Cook the pumpkin puree, stirring constantly and scraping up the bottom of the pan with a wooden spatula until the puree has reduced to 1 cup. The pumpkin puree should darken and thicken at the same time. Discard the bay leaf after your done.

5. Place the sugar, butter, eggs, half and half, flour and cornmeal in a large mixing bowl. Beat together with a fork by hand. Add the cooked pumpkin puree and mix until smooth. Add the spices, salt and vinegar and beat until incorporated. Pour the filling into the pre-baked tart crust carefully. Carefully return the pie to the oven and bake for an additional 23-27 minutes. The pie will be done when the center is set and doesn’t jiggle. Let cool to room temperature and refrigerate overnight. Bring back to room temperature to serve.

If you like this chess pie, you should check out my award winning (and  slightly more complicated) blackberry lemon chess pie recipe.

This blog currently has a partnership with Amazon.com in their affiliate program, which gives me a small percentage of sales if you buy a product through a link on my blog. I only recommend products (usually cookbooks, but sometimes ingredients or equipment) that I use and love, not for any compensation unless otherwise noted in the blog post. If you are uncomfortable with this, feel free to go directly to Amazon.com and search for the book or item of your choice.
870shares