These fluffy cinnamon rolls are easy-to-make from scratch and have an extra amount of cinnamon in the filling make to give them zip and pop! Make them the night before if you want a special breakfast with minimal morning effort.

My obsession with cinnamon rolls is a little over the top. This is clearly evident in my archives, as I have recipes for pumpkin cinnamon rolls, sweet potato cinnamons, rosemary pistachio cinnamon rolls, red velvet cinnamon rolls, eggnog cinnamon rolls, and quick and easy cinnamon rolls. Heck I even have a cinnamon bun cookie on this blog! WHAT. IS. WRONG. WITH. ME. (some would argue SO MUCH, but that’s probably a blog post for another day). YET…somehow I have never shared a recipe for my basic classic cinnamon rolls. Partly it is because I keep on tinkering with the recipe, trying over and over to find that center of the Venn diagram of easy-to-make, super fluffy, and extra tasty without being too sweet. Finally, here’s my favorite homemade cinnamon roll recipe.

How do you make cinnamon rolls from scratch?

Classic cinnamon rolls start with a yeasted enriched dough, which is just fancy phrasing for a dough made with yeast, flour, butter, milk and eggs. It’s not difficult to make, though it does helps if you use a stand mixer to help knead the dough. Fear not though! If you don’t have a stand mixer, you can still make excellent cinnamon rolls. I have instructions for that too, just see the hand kneading section below!

First proof the yeast (see the yeast section below on what this means) by dissolving it in milk with a little sugar. Then combine the yeasty liquid with flour, sugar, butter, and eggs. Knead until a dough forms. Let the dough rise until double in size.

Once the dough is made and rolled out into a rectangle, you spread the cinnamon filling out on it, then you roll up the dough! Cut the dough into small disks, place in a baking pan, and let it rise again.

Then bake the rolls until they are gloriously golden brown! Glaze with a classic cream cheese frosting and serve them up.

Yeast scares me! Do you have any tips on using it?

I feel ya! I used to be scared of yeast too. But nowadays commercially available yeast (the kinds that come in packets at the grocery store) is pretty foolproof. Here are a few tips on how to comfortable use this common baking ingredient.

Use recently purchased yeast. Make sure the yeast package is well within the expiration date and hasn’t been languishing too long in the back of a hot kitchen cabinet. Storing your yeast in the fridge will help keep the yeast viable. Some folks even store it in the freezer, but I don’t bother as I go through it too fast.

Proof the yeast. This process sounds scary but all it entails is dissolving the yeast in warm (but not hot) liquid. If the yeast is “alive” you’ll start to see bubbles at the top of the liquid. Optimally the water or milk should be 90 to 100°F. But I never bother to get the thermometer, I just make sure the liquid is lukewarm to the touch.

Sprinkle a little sugar into the liquid to give the yeast some “food” to grow. And keep in mind that milk (which is what I use in this recipe) often doesn’t proof the yeast as well as plain water. So don’t stress too much if you don’t see as much bubbles on the surface.

Don’t be confused or worried by the different variants of yeast! There are numerous names for the type of yeasts out there, and even more confusing, varies brands have their own name.

Regular active dry yeast is what I use to develop this recipe. But you can use Rapid Rise or Instant yeast as well! Just realize that both of them will make the dough rise faster. Just keep an eye on dough and just form the rolls when the dough has doubled in size. Then proceed with the recipe as directed.

I don’t have a stand mixer. Can I hand knead the dough?

Yes! You don’t need a stand mixer to make cinnamon rolls, but it does make it a little bit easier is all. Just follow the instructions, mixing all the ingredients together in a large bowl with a wooden spoon or wooden spatula. Once a dough has formed and most of the wet ingredients are incorporated, carefully dump the content onto a clean surface.

Using the heels of your hands, push the dough down, then fold it over and push again. Continue this kneading process on the dough, incorporating the remaining dry ingredients into the dough. Continue to knead until you have a smooth elastic dough, about 5 to 6 minutes. Make sure to dust your hands and surface with extra flour if necessary. Keep in mind that the final dough is slightly tacky but not sticky.

Can I make these overnight rolls?

Yes! If you want, make the dough, let it rise, form the rolls and place them in the baking pan. Then cover them and let them sit in the refrigerator overnight. Bring them to room temperature the following morning (about an hour on the countertop) and proceed with baking them. If the rolls are still a little cool from the fridge and haven’t quite gotten to room temperature, don’t worry. Just bake them a few minutes longer.

How do I store these rolls?

Cinnamon rolls are best when they right out of the oven. The longer the rolls sit around, the drier and more stale they become. However, you can store leftover rolls for up to 1 day on the counter, covered in an airtight container. Or you can cover and store for up to 3 days in the fridge. Just make sure the rolls come to room temperature before serving or eating them.

Can I freeze these rolls?

Yes! These cinnamon rolls totally freeze. That said, the cream cheese frosting does get a little gooey when you pull the out of the freezer. If you are making them to serve a batch ahead of time, you might consider freezing them before you frost them. Thaw them out and then frost and serve.

That said, you can store already frosted rolls in an airtight container in the freezer for up to 2 months. Thaw on the counter before serving. If you choose to store then in a Ziploc gallon freezer bag, I suggest covering the glazed cinnamon rolls with parchment or wax paper first, then placing them in the freezer. The paper will peel off the frozen frosting easier than trying to scrape the frosting off the plastic freezer bag.

If you like these cinnamon rolls check out these other morning baked goods: 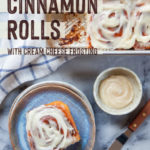 These fluffy and sweet cinnamon rolls have a pretty robust amount of cinnamon in them, which give them zip and pop! But if you prefer something slightly more mellow, reduce the cinnamon down to 1 tablespoon. These can also be prepared the day before, and then stored in the refrigerator overnight, making them perfect for a special morning breakfast with minimal work!
Course bread, Breakfast, Dessert, Snack
Cuisine American
Keyword bread, cinnamon rolls, yeast
Prep Time 20 minutes
Cook Time 35 minutes
Rest Time 2 hours 30 minutes
Servings 12
Calories 543kcal
Author Irvin

Frosting technique (where you frost the rolls immediately after taking them out of the oven with a little frosting, then let it cool and frost again) adapted from Sarah Kieffer’s cinnamon roll recipe.

This blog currently has a partnership with Amazon.com in their affiliate program, which gives me a small percentage of sales if you buy a product through a link on my blog. I only recommend products (usually cookbooks, but sometimes ingredients or equipment) that I use and love, not for any compensation unless otherwise noted in the blog post. If you are uncomfortable with this, feel free to go directly to Amazon.com and search for the book or item of your choice.
138shares