I was running late, working at the high-end department store (which is another story for another time) when I realize that I just wasn’t going to make it to both parties that I was scheduled back-to-back for that night. So, picking and choosing, I went with the one where cookies were involved. After all, I had already baked the cookies for the cookie swap and I couldn’t let my Snappy Cinnamon Spice Bun Cookies with Honey Buttermilk Glaze go to waste. Besides, when there is a choice, cookies always win. 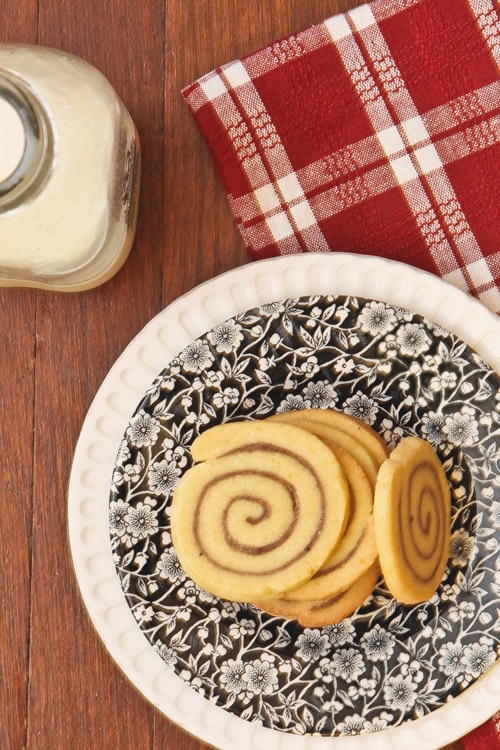 The day was rather exhausting. I had always sworn that I would never work retail again, but when an old friend called me up to ask if I could help out his company hand out cookie sample at the aforementioned department store, I figured why not? I could always use a little extra cash for the holiday season (who doesn’t?), it couldn’t be that hard to pass out cookies and it might be nice to get out of the apartment for a little bit, as opposed to sitting at my computer staring at my Twitter feed waiting for that one. hilarious. tweet. that I knew was just going to pop up…soon…real…soon… *sigh* #damnMyFOMO.

Besides, I love the holiday season! 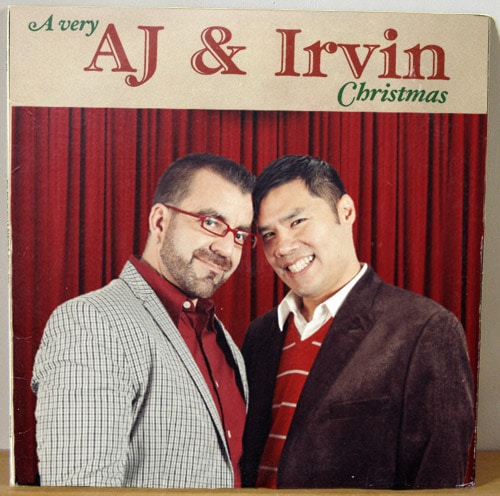 This album was HUGE in Japan back in the 70's.

What I had selectively forgotten is that the holiday season for retail is a madhouse – especially during the weekends. People have that vague blank look in the eyes, glazed over like Juliette Lewis in Cape Fear, from shopping nonstop for hours on end, the holiday music repeats after an hour (thankfully this particular department store had a decent mix – I could listen to The Cocteau Twins’ Winter Wonderland over and over again) and my patience tends to wear thin after explaining to the forty-fifth person that the bathroom is down the hall and on the right.

But I’m not here to rant about the ridiculousness of working at high-end department store during the holidays that charges $48 for a tin of popcorn in caramel/cheese/butter flavors, as it was totally my choice to work there (and the customer’s choice to spend $48 on popcorn, when they could have made it at home for about $5). The department store, by the way, has treated me very nicely (as has the company I am working with – which I would totally work with again). No, I’m here to tell you about these cookies and the fabulous cookie swap that my friend Annelies hosted. 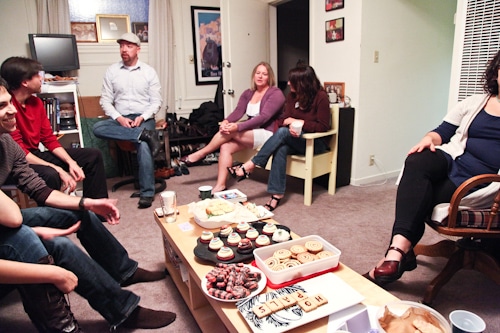 This is the second year in a row that Annelies has hosted a holiday cookie swap and this one had some of my favorite people there, with some of my favorite cookies! For instance, Anita over at Desserts First showed up with alphabet Linzer cookies that spelled out “HAPPY HOLIDAYS”. Of course, each subsequent cookie taken, meant that the cookies had to be rearranged to spell something else. When we arrived, the current phrase was “PAY PAL HOS” and ended with “LAOS” when we left. 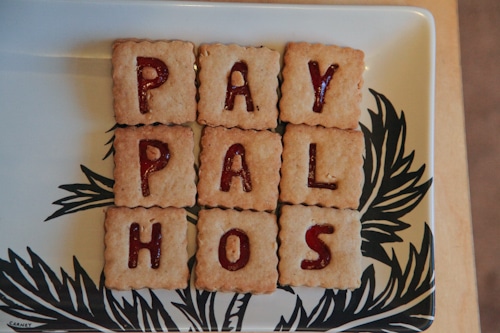 There were rosemary lemon pepper shortbread cookies by Sabrina from The Tomato Tart who struggled with her kitchen scale before resorting to the old school cups and teaspoon method after realizing the scale was broken. Faith from Blog Appetit brought vegan Peppermint Candy Crisps, Charissa and Patrick from Zest Bakery arrived with some coconut Peanut Butter Chocolate Gluten Free Cookies and Susie from Nutty Fig brought some Drunken Almond Macaroons that had me feeling a bit tipsy with each bite. 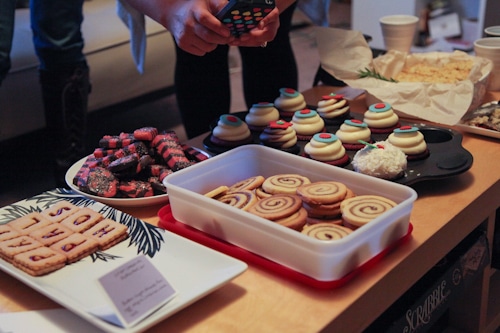 So many treats, so little stomach room....

Stephanie from Desserts for Breakfast cheated a bit and brought bars instead of cookies but that’s OK because Anita had also brought a bunch of cupcakes as well and our host Annelies had made Buddhettes, candied Buddha’s Hand covered in chocolate. I wasn’t going to complain, especially with my mouth full of cupcakeness. 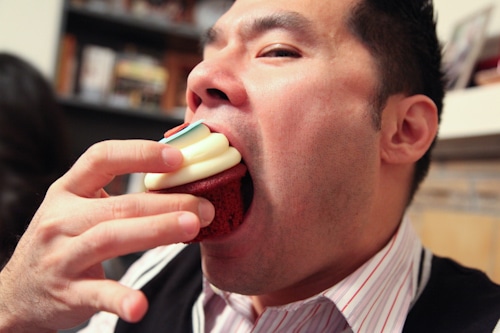 AJ takes the most flattering photos of me.

Of course, Annelies also made Peppermint Chocolate Rochers and they were all kinds of fantastic. And then there were my Snappy Cinnamon Spice Bun Cookies with Honey Buttermilk Glaze. Lately I’ve been making laminated and rolled cookies for the holidays and when I came across these cookies in the Cookies at Home with the Culinary Institute of America book I knew that I had to make them. Crispy, snappy, inspired by cinnamon bun, I had a blast making them, and a blast swapping them with others at the party. If they weren’t all gone, I’d totally have another one right now, to give me a little more energy to get through the rest of the week…and make it to all the parties that I’ve been double booked for. 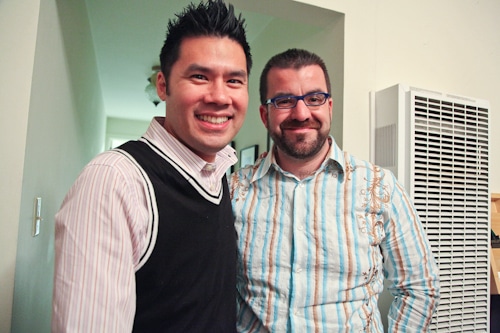 AJ and I full of cookies and other holiday baked goods.

Crispy and sweet with a number of spices to invoke the holidays, these snappy cinnamon rolled cookies have a buttermilk glaze to mimic a cream cheese frosting that cinnamon buns usually have. I like to add more spices to the mix, to give complexity to the cookie, but feel free to keep it classic and just use cinnamon by itself. Keep in mind that you have to refrigerate the dough for half an hour before slicing them to bake, so schedule that in. Or just make them the day before and keep them in the fridge overnight, making them a snap for fresh baked cookies the following day.

Adapted from Cookies at Home with the Culinary Institute of America. 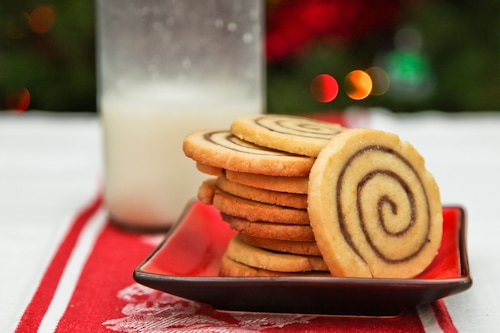 1.  Make the cookie dough by first cutting the butter into 1/2 inch cubes. Place the butter, sugars, salt, orange zest, baking powder, vanilla extract in the bowl of a stand mixer fitted with a paddle attachment. Slice the vanilla bean lengthwise and scrape the seeds into the bowl. Cream the ingredients together on medium speed until light and fluffy, about three to four minutes.

2. Add the egg and beat again for 30 seconds, or until the egg is incorporated. Add the flour and beat on low speed until just incorporated about a minute.

3. Flour a flat clean surface and scrape the dough out onto it. Roll the dough out into a 12 x 12 inch square. The dough should be about 1/2 inch thick.

4. Make the cinnamon spice filling by placing all the ingredients in the same mixing bowl of the standing mixer (don’t bother to clean it from the previous dough). Beat the ingredients until they are well incorporated and smooth, about 2 minutes.

5. Smear the filling on top of the cookie dough, making sure to bring the dough all the way to all four edges. Starting at one end, roll the dough tightly into a log. Cover with plastic wrap or parchment paper tightly and refrigerate for 30 minutes or overnight.

6. While the cookie dough chills, preheat the oven to 350˚F. Line a baking sheet with a silpat or parchment paper. Once the dough has chilled, slice the roll into 1/2 inch thick disks and place them 1 1/2 inches apart from each other on the baking sheet. Bake in the oven for 12 to 14 minutes or until the edges of cookie are golden brown.

7. Let the cookies cool for 10 minutes on the baking sheet before moving them to a wire cooling rack to cook completely.

This blog currently has a partnership with Amazon.com in their affiliate program, which gives me a small percentage of sales if you buy a product through a link on my blog. I only recommend products (usually cookbooks, but sometimes ingredients or equipment) that I use and love, not for any compensation unless otherwise noted in the blog post. If you are uncomfortable with this, feel free to go directly to Amazon.com and search for the book or item of your choice.
316shares