The days have gotten short and brisk here in San Francisco while the nights are long and dreary right now. And though the days will start to get longer soon, I feel like I’ll still be hunkering down for the next couple of months, trying to achieve some Scandinavian hygge, a Danish word for a mood of comfortable contentment.

What is a cardamom bun?

Cardamom buns, called kardemummabullar in Swedish, are the sibling to the classic cinnamon bun, though they are significantly less sweet, with a brown sugar cardamom filling and no icing on top. Instead of the sticky cream cheese frosting, the Scandinavian cardamom knot has Swedish pearl sugar sprinkled on top.

How do you make cardamom buns?

First you make an enriched yeasted dough, which has all-purpose flour, milk, eggs, butter, vanilla, salt, brown sugar, white sugar and a touch of cardamom in it. Knead and let the dough rise until double in size.

As the dough is rising, make the filling which has brown sugar, butter, vanilla, cardamom and cinnamon in it. Yes, the cinnamon is not traditional in a Swedish cardamom bun, but I like the extra warmth and dimension it adds. Feel free to omit it if you are a purist.

Once the dough has risen, roll the dough out in a large rectangle and spread half the filling over it. Fold the dough in half over the filling.Once the filling is sandwiched between the dough, cut the dough into 1-inch strips. Wrap the dough around your fingers and form the knots! Let the buns rise, brush with an egg wash, sprinkle with the pearl sugar and bake.

Wait back up. That knot looks complicated, how do you shape cardamom buns?

It’s not! Promise. If you can tie a ribbon around a present, you can make these buns. In fact, it’s EASIER than tying a ribbon!

Roll the entire dough out into one large rectangle, about 12 x 18-inches. Then spread the filling over half the dough. Fold the dough in half, creating a 12 x 9-inch rectangle.

Cut into 12 strips, about 1-inch thick. Take the strips of dough with the filling inside, gently stretch each strip out to twice its size, about 18-inches long.

Then take the remaining dough and change directions, using that last piece of dough to wind around the bun, making sure the end of the dough is on the bottom of the bun.

If those instructions and photos above don’t help you, here’s a short 15 second video that shows how to twist and fold the cardamom buns.

Proceed with the recipe as written, letting the knots rise for an hour, and then brushing with an egg wash, sprinkling with pearl sugar and bake until golden brown.

Cardamom is a spice that comes from the seeds of a couple of different plants in the ginger family. It is used a lot in Indian cooking and is one of the common components in Indian chai beverages. It is native to South India and Indonesia, though most cardamom purchased in the United States is from Guatemala. Though long associated with South Asian and Middle East, cardamom spice has migrated to Scandinavia where is has been used liberally in Nordic baked goods. Sweden consumes 18 times more cardamom than the median country, while Norway consumes 30 times as much!

Cardamom has a more complex flavor profile than cinnamon, though the two are often compared to one another. Cardamom has floral and citrus notes in it, with a subtle mentholated eucalyptus taste. I use a blend of ground cinnamon and ground cardamom in this recipe because I like how they interplay with each other, but you can use all cardamom if you want to make this a traditional cardamom bun. Or you can omit the cardamom completely and use cinnamon in its place, turn these knots into beautiful individual cinnamon rolls.

What is Pearl Sugar?

Pearl sugar, otherwise known as nib sugar or hail sugar, is coarse, crunchy, hard white sugar that does not easily dissolve. It comes in two versions, Belgian and Swedish. The Belgian pearl sugar is larger and used in liege waffles, while the Swedish style is smaller and looks like pretzel salt. I use the Swedish pearl sugar on these cardamom knots. If you have Belgian style pearl sugar, try placing them in a heavy-duty freezer Ziploc bag and crushing them with a rolling pin into smaller bits before using them in this recipe.

You can find pearl sugar online (<- affiliate link) or at specialty baking and professional food shops. Ikea occasionally sells it as well in their food department. If you can’t source it or don’t wish to buy it online, you can make a substitution by lightly crushing some sugar cubes in a resealable Ziplock bag under a rolling pin. Keep in mind the resulting sugar won’t be exactly the same as the pearl sugar and the knots won’t look as traditional, but they will still taste great.

Of course, you can also just use sparkling sugar, turbinado sugar or even plain sugar on top of the knots. They won’t look as traditional but will be equally tasty, with a crunchy sweet topping.

Can you make these ahead?

Can I substitute instant or rapid rise yeast for the active dry yeast?

Instant yeast also does not need to be dissolved in liquid first. Just add the yeast with the flour and proceed with the recipe.

Can I knead this dough without a stand mixer?

Yes! Just hand knead this dough for 6 to 7 minutes on a clean surface until the dough is smooth and elastic. You want the dough to be slightly tacky but not sticky and not dry.

How do you store these buns?

Store the buns in an airtight container for 2 to 3 days at room temperature or up to 7 days in the fridge. Warm them up in the microwave for 30 seconds or in the oven/toaster oven at 350°F for 5 to 7 minutes or until warm.

Can you freeze the cardamom knots?

Yes! These cardamom knots freeze great! Let the knots cool completely and then place them on a baking sheet in the freezer for 2 hours or until they are completely frozen. Then store them in a resealable Ziploc bag or airtight container for up to 2 months. Thaw them on the countertop or just warm them up directly in the microwave (1 minutes) or in an oven/toaster oven at 350°F for 10 to 15 minutes, or until warm. 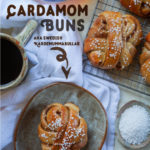 These beautiful Swedish cardamom knots are easier to make than they look. A cousin to the classic cinnamon roll, these buns have ground cardamom, as well as a touch of cinnamon, in the filling, adding an alluring floral and citrus note to these buns. Feel free to use all cardamom in the filling if you’d like a more traditional cardamom bun. These buns require two resting periods to rise, so plan accordingly, or make the buns one day, let them rest in the fridge overnight, and bake them the next day!
Course bread, Breakfast, Snack
Cuisine Swedish
Keyword bread, buns, cardamom, cinnamon, swedish meatballs, sweet buns, yeast
Prep Time 45 minutes
Cook Time 15 minutes
Resting time 2 hours
Servings 12
Calories 362kcal
Author Irvin

This blog currently has a partnership with Amazon.com in their affiliate program, which gives me a small percentage of sales if you buy a product through a link on my blog. I only recommend products (usually cookbooks, but sometimes ingredients or equipment) that I use and love, not for any compensation unless otherwise noted in the blog post. If you are uncomfortable with this, feel free to go directly to Amazon.com and search for the book or item of your choice.
108shares