You are here: Home / bread / Bialy, the underappreciated cousin to the bagel

It’s time for the bialy, the cousin to the bagel, to get some glory. This easy bialy recipe, with a secret baking tip, will impress your jaded NY friends! 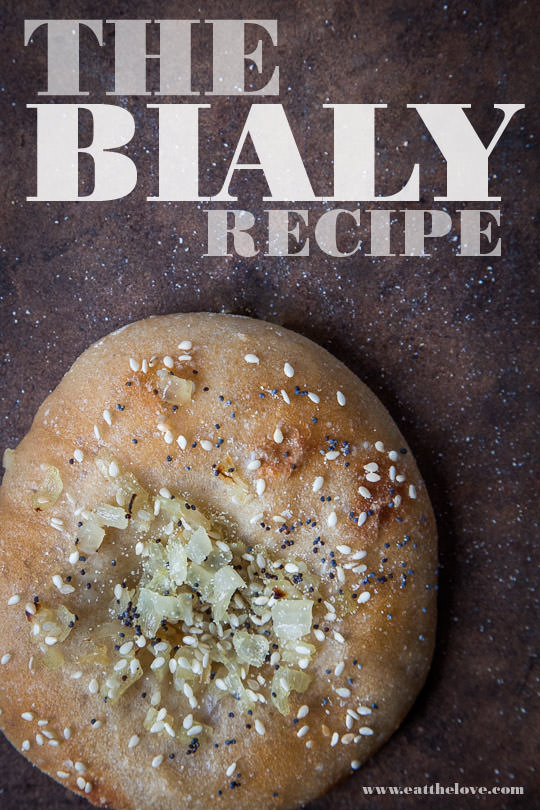 True confession time, though I absolutely adore making chewy yeasted pretzel buns, crumpets, and English muffins, but I’ve never made a bialy before making this recipe. The under-appreciated sibling to the ubiquitious bagel, I was unaware of it’s existence until I came across an article on Bon Appetit’s site praising it as the new King of Carbs in their article on Restaurant trends of 2014. I’m not one to jump on trends but once I started digging into what they were, I was sold. I needed to get ahold of one, or better yet make one myself. Turns out they’re easier to make than bagels because you don’t need to boil them ahead of time, and when filled with onions and seeds, just as good (if not slightly better, depending on your point of view). So it look like my bialy recipe is now going to be in regular rotation here in our home! 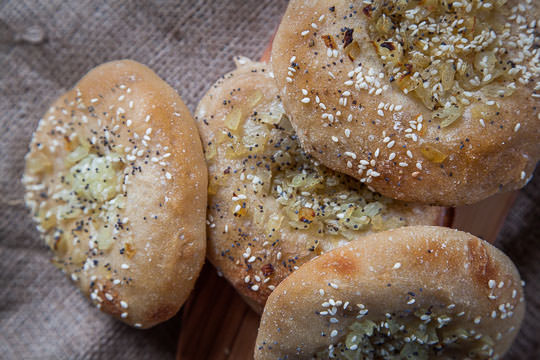 What’s the difference between a bialy and bagel?

If you never had a bialy, or aren’t familiar with them, most bialys look and are described as a bagel but without the familiar hole in the middle, instead a depression filled with onions. Of course hardcore bialy fans will disagree and say they are nothing like the bagel, which are boiled and have a shiny crust and dense crumb. My friend Pat claims that as a purist the bialy only has onions and nothing else, but all the recipes I found online, also had poppy seeds and a few sesame seeds as well. I’m a maximalist when it comes to food so I made sure to load mine up with lots of onions, sesame seeds and poppy seeds as well as a generous sprinkling of salt. I may or may not have added a dash of ground black pepper – but don’t tell anyone, as that’s OBVIOUSLY stepping over the line there.

Once my partner AJ Instagrammed & Facebooked the resulting bialys, our friends seemed to approve. My brother-in-law specifically stated “they look pretty good” which is high praise coming from a native New Yorker. Pat quibbled about the seeds but otherwise was jealous of them. And David, author of the book The Culture of Tough Jews exclaimed that he loved them! Well actually he wrote that he loved bialys but I’m going to go with it and say he loved mine. Excuse me while I go have another… 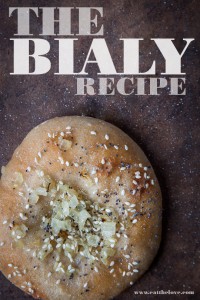 The neglected bialy is getting it’s heyday recently with appearances in places outside their usual NYC residence like San Francisco’s Wise Son’s Deli as well as showing up on articles about new restaurant food trends. But a bialy isn’t just a bagel with some onions thrown into it, it’s a delicious creature all it’s own. With a center depression (but no hole) and a direct bake in the oven (without boiling them first like you do with bagels), bialys make a great savory breakfast or pretty much any time of day snack option. Traditionalists will probably quibble with the poppy and sesame seeds and be slightly horrified that I add a dash of black pepper as well. Feel free to use whole wheat or white whole wheat flour instead of all-purpose flour to give the bialy a little more bite of flavor, but these will be awesome with just plain all-purpose. One more thing about my recipe, traditional bialys are made in commercial kitchens where ovens can be cranked really high. The resulting steam released and trapped in the commercial ovens helps to form a crust. Chef Elizabeth Falkner actually prefers to make hers with a wood-fired oven which can get even higher in temperature. Being a mere mortal at home with my cheap-o oven that came with my rental apartment, I resorted to a simple home baking trick. Take a metal 9 x 13 inch baking pan (the sort you make brownies in) and turn it upside down and place a brick, cast iron skillet or heavy oven-proof pot on top. The weight of the brick or skillet traps the steam from the dough inside the pan, which in turn makes for a great chewy crust. It’s a similar trick to using the Dutch oven to make artisan bread (which is what inspired me to come up with this method). However if you find the baking pan and brick too fussy, you can just skip it, but I think it really does make a difference in the final product. We’re talking bakery style bialy results folks with this method! To make this recipe you need to create a poolish starter the day before you make the bialys. Keep this in mind when planning.
Course Appetizer, Breakfast
Cuisine American, Jewish
Keyword bagel, baking, bialy, jewish, yeast
Prep Time 35 minutes
Cook Time 25 minutes
Resting Time 10 hours
Total Time 1 hour
Servings 16
Calories 120kcal
Author Irvin

Adapted from a recipe by Chef Elizabeth Falkner shared by Food Republic.

This blog currently has a partnership with Amazon.com in their affiliate program, which gives me a small percentage of sales if you buy a product through a link on my blog. I only recommend products (usually cookbooks, but sometimes ingredients or equipment) that I use and love, not for any compensation unless otherwise noted in the blog post. If you are uncomfortable with this, feel free to go directly to Amazon.com and search for the book or item of your choice.
3120shares