This cherry tomato focaccia with rosemary and sea salt is easy-to-make and perfect as an accompanying bread for soup or stew!

Tomato season is raging strong here in California with all the heirloom tomatoes. I’ve been making easy baked ziti, my zucchini pasta summer vegetable medley, vegetarian breakfast tacos and queso dip like mad crazy. But after sharing my fig and honey focaccia here, I realized I have never shared a more traditional classic cherry tomato focaccia with rosemary and sea salt recipe. This is the focaccia that I’ve been making for the past 25 years (from before I even moved to San Francisco) after I discovered the magic of using a small boiled mashed potato in the dough from an old lost cookbook that I no longer can find. I make it all the time at home to go along with soups like my Summer minestrone or Leek and Beans soup.

Focaccia is an Italian flat bread that is often associated or confused with pizza. But focaccia dough is different than pizza dough, especially the recipe I am sharing here, which uses a mashed russet potato in the dough.

If you’ve never had a focaccia, think of it is a slab of herb bread, comparable to a thick crust or deep dish pizza, without the sauce or pizza toppings. Though focaccia can come in a variety of styles, from thin to thick, most focaccia is more bread than topping, without any sauce on top. One of the most simple types of focaccia is often topped just with a drizzle of olive oil, salt and some rosemary. This version has the addition of cherry tomatoes to the top, which is also very common.

Though most focaccia is savory, focaccia can also sometimes veer into the sweet side, like my fig, honey and lemon focaccia!

How do you make this focaccia?

To make this focaccia, a small baking potato is peeled, quartered and simmered in water until soft. The potato is then mashed, and the remaining potato water is mixed with yeast.

Knead the mashed potatoes together with flour, olive oil, honey, and salt until a nice soft dough is formed. You can do this with a dough hook and stand mixer or by hand.

Once the dough is puffy, press the cherry tomatoes into the dough and sprinkle the top with fresh rosemary and salt. Bake and serve!

Why do you use potato in the focaccia bread?

There are plenty of focaccia bread recipes out there without potato in the dough, but the addition of the potato creates a wonderful soft dough that will rise higher. It’s a traditional method that is used in the Puglia region of Italy.

Adding potato to the dough lowers the gluten content, meaning the dough will be more soft, tender and less chewy. The potato is high in starch, which swells when it is cooked. This starch also holds onto water, which leads to a moister bread.

The potato itself also adds additional flavor because it ferments faster than regular flour while the sugars in the potato don’t get consumed as fast by the yeast, leading to a slightly sweeter, more complex-flavored focaccia.

Can I substitute regular tomatoes for the cherry tomatoes?

Yes! Just cut the regular tomatoes into bite size pieces, roughly 1-inch in size, or the size of a cherry tomato. Or, if the tomatoes are smaller, you can slice them into rounds and use that. You want roughly 1 1/2 cups to 2 cups of cut or sliced tomatoes, which can be anywhere from 2 small Roma or Early Girl tomatoes to 1 large heirloom or Beefsteak tomato.

Can I use dried rosemary instead of fresh rosemary?

I don’t recommend dried rosemary leaves for this recipe, as they tend to be woody and tough in texture. If all you have dried rosemary, try grinding it up in a mortar and pestle, or in a spice grinder and then mixing it with the salt to make rosemary salt. Use this to sprinkle over the focaccia dough before baking.

What other herbs and spices work on focaccia?

When I’m making focaccia as a side dish for a soup or stew, I tend to keep the topping simple. But feel free to add more fresh or dried herbs, spices and aromatic vegetables to the topping! Here’s a few suggestions that would be great on this focaccia include:

Can I substitute instant or rapid rise yeast for the active dry yeast in this recipe?

If you use instant yeast, you do not have to dissolve the yeast in the potato water. You can directly add the yeast in when you add the flour and other dry ingredients.

How do I store focaccia?

Focaccia keeps for about 2 days. Just store it in an airtight container or resealable Ziploc bag at room temperature. Refresh it in the toaster oven or regular oven at 325°F for 5 minutes.

Does the focaccia freeze?

Yes, you can totally freeze this bread! When I bake up a big batch of focaccia, I usually can’t eat it all. I freeze any remaining leftovers in a heavy duty resealable Ziploc bag for up to 3 months. Just thaw it out at room temperature, or in the toaster oven or regular oven at 325°F for about 10 to 15 minutes.

Keep in mind that freezing, and the subsequent thawing of the focaccia will also make the tomatoes very watery so don’t be alarmed when you warm up the leftover focaccia.

Can I hand knead this dough?

Yes! The instructions in the recipe are for using a stand mixer, but you can hand knead the dough if you wish. Just mix the dough ingredients in a large bowl using a wooden spoon. When a rough dough forms, dump the dough and any dry loose bits onto a clean surface. Knead the dough with the heel of your hand for about 5 to 7 minutes until smooth and elastic. Then proceed with the recipe.

If you like this focaccia recipe, check out some other bread recipes: 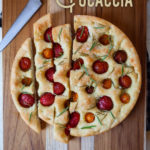 This blog currently has a partnership with Amazon.com in their affiliate program, which gives me a small percentage of sales if you buy a product through a link on my blog. I only recommend products (usually cookbooks, but sometimes ingredients or equipment) that I use and love, not for any compensation unless otherwise noted in the blog post. If you are uncomfortable with this, feel free to go directly to Amazon.com and search for the book or item of your choice.
153shares