This homemade queso recipe is made from scratch, using cheeses like Cheddar and Colby Jack, along with aromatic spices like garlic, onion and cumin, creating the best queso!

Even though I have a recipe for beer cheese dip on this site, I’ve been working on a different sort of cheese dip recipe for awhile now, queso dip! I’ve long been obsessed with the best queso recipe ever since I had some at a chain Mexican restaurant in my formative high school years.

Local chain restaurants were the only exposure I had to Mexican food growing up in the suburbs of a mid-sized Midwest city.  And though that meant most of the Mexican food was pretty middle-of-the-road, one thing they did fairly well was appetizers, specifically Mexican-American style appetizers like queso dip.

Queso is a popular Tex-Mex appetizer cheese dip, one that appears in nearly all Texas picnics and barbeques. The common recipe that you find for queso is dead simple. A block of Velveeta, that super processed cheese product, and a can of Ro-Tel diced tomatoes and green chiles. Throw the two together in a microwave-safe bowl and cook away. Melted cheese nirvana awaits.

Despite the common version of queso featuring American cheese or Velveeta, there’s quite a lot of leeway in creating queso. In fact, there’s a who book on Queso written by Lisa Fain and the internet is filled with variant recipes of how to make your own queso.

How to make queso

Making queso from scratch is fairly easy, though you do need to chop a few things and grate some cheese.

First grate 8 ounces of cheese. Pre-shredded cheese is often coated with a substance that doesn’t allow it to melt as easily and can lead to a gritty cheese dip.  So freshly grated cheese is worth the minimal effort.

Next mince some garlic. Chop some onions, green onions, a tomato, handful of cilantro, and a jalapeño or Serrano pepper if you like it spicy.

Sauté the garlic, onions and the white part of the green onion in a medium sized frying pan. Add the chopped tomato once the garlic and onions have softened and are cooked. Add a can of evaporated milk, cornstarch and some mustard and then some spices, like cumin and cayenne, once the whole pan is bubbly and thick.

Stir in the shredded cheese by the handful, waiting for it to melt before adding more. Top with the green part of the green onions, cilantro and chopped peppers, along with a sprinkling of cayenne or paprika. Serve with tortilla chips, soft pretzels, or anything else you think would be great covered in cheese!

What makes this the best queso recipe?

I’ve tested and developed four different versions of queso and the one that I liked the best uses canned evaporated milk (not condensed milk) in the mix. The intense milky flavor isn’t heavy and rich like dips that use cream or half and half, nor does it have a starchy consistency, which sometimes happens when you use a thickener like roux (a butter and flour mixture).

I use a blend of Cheddar and Colby Jack cheese and skip the American or Velveeta. If you like a more classic (but still upgraded) version of queso, you can substitute shredded American cheese for the Colby Jack.

Most queso thickens a bit as it cools down, but this recipe is also designed to not solidify when cool, meaning you can still dip into it at room temperature! Making it perfect for parties or game night.

Finally my version has fresh chopped garlic and onions for flavor, as well as dried spices like cumin, paprika and cayenne pepper. There’s also a touch of mustard which grounds the queso and gives it a little earthy depth. Both the mustard and the little bit of cornstarch work as emulsifiers to help keep the queso from getting grainy or gritty.

What sort of cheese should I use?

The classic queso uses American or Velveeta cheese. But making queso from scratch usually eschews those cheeses and uses yellow Cheddar. I use a mix of Cheddar and Colby Jack cheese here because I like the mild melty creamy quality of Colby Jack, which is a combination of Monterey Jack and Colby cheese.

That said, if you are feeling bold, you can substitute different cheeses for either of those. Keep in mind that the farther you go from Cheddar, the more folks will argue it’s not a queso, it’s a cheese dip! And yes, there are folks who will argue even using Cheddar cheese and not Velveeta means it’s not queso!

All that said, here are few other types of cheeses you can experiment with if you don’t like cheddar or Colby Jack.

How to store queso

Homemade queso lasts about three to four days in the fridge. Just store it in an airtight container, and heat it up either in the microwave or the stovetop to warm it up.

What sort of ingredients can I substitute in this recipe?

Substitutions in any recipe are always a difficult questions to answer, as it’s nearly impossible for me to test EVERY variation of the recipe. But here are a few potential substitutions that I think will work in case you don’t have the ingredients on hand, or don’t feel like chopping.

Keep in mind these are educated guess, I have not actually tested all these substitutions. If you have, please come back and let me know how they turn out! I’d love to add or expand to this section with your feedback.

What to serve your queso with?

Queso dip goes well with pretty much anything! The classic combination of tortilla chips and queso are what is served at nearly every Tex Mex restaurant. But think beyond the tortilla chip and consider these options to serve next to the cheese dip.

If you like this queso recipe, check out these other Mexican recipes on my blog 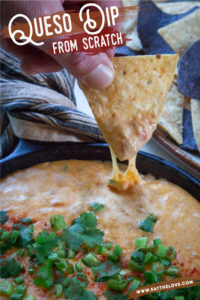 Queso is a Tex-Mex cheese dip that often made by melting Velveeta and stirring in a can of Rotel diced tomatoes and chiles. This made-from-scratch version uses cheddar and Colby Jack cheese, along with garlic, onions and other spices to take you queso dip to the next level! Though it does require some chopping (garlic, onions, tomatoes, jalapeno, green onions, cilantro) the prep time is pretty fast and the results are definitely worth the effort! Be sure to grate the cheese and not use already shredded bagged cheese. The pre-shredded cheese is coated with a substance that prevents the cheese from melting properly and will lead to a gritty queso.
Course Appetizer, Side Dish, Snack
Cuisine American, Mexican
Keyword appetizer, cheese, dip, tex-mex
Prep Time 15 minutes
Cook Time 10 minutes
Servings 8
Calories 196kcal
Author Irvin

Pro tip: Don’t salt the dip until you’ve tasted it with a tortilla chip or whatever you might be serving it with. Tortilla chips and other foods like celery or carrots differ wildly in salt level. Adjust the salt in the queso to whatever you serve the dip with!

This blog currently has a partnership with Amazon.com in their affiliate program, which gives me a small percentage of sales if you buy a product through a link on my blog. I only recommend products (usually cookbooks, but sometimes ingredients or equipment) that I use and love, not for any compensation unless otherwise noted in the blog post. If you are uncomfortable with this, feel free to go directly to Amazon.com and search for the book or item of your choice.
206shares