This easier-than-it-looks apricot tart is made with fresh apricots, fragrant almond frangipane and a nutty, malty rye crust.

Though my obsession with stone fruit on this blog is fairly obvious with various recipes like cherry slab pies, peach and prosecco cobblers, and plum crisps, somehow apricots always feel overlooked. But apricots have their own homey appeal, and I always grab some when they show up at the store to make my apricot yeast bread, the apricot blueberry coffee cake or my apricot and berry cobbler. So, when I ran into some perfectly ripe apricots in the store, I knew I had to make something new with them. The result is this beautiful, sophisticated apricot tart with frangipane filling and rye crust.

How do you make this tart?

This easy-to-make tart doesn’t require you to roll out a dough. Instead, the crust is made almost like a shortbread, pressed into the tart pan, eliminating the need to roll out the dough. Start by combining rye flour, powdered sugar, salt and butter into the bowl of a stand mixer. Then mix until the butter is broken down and the mixture looks like sandy pebbles. Mix an egg with some water and drizzle it in, until a dough forms.

Press the dough into the tart pan, then freeze the dough for 20 minutes while you preheat the oven. Bake the crust and let it cool.

While the dough is cooling, make the frangipane filling by combining almond flour, sugar, salt, butter, vanilla, almond extract, an egg, and some rye whisky in the same bowl you used to make the tart dough. There’s no need to clean it! Spread the filling over the cooled tart crust, then cut the apricots in half and slice them. Place them on the filling. Bake and let cool before serving.

Frangipane is a sweet almond custard filling. I love it as a base in tarts and galettes like my plum galette with frangipane filling and my mead poached pear galette with frangipane filling. You can make it with different nuts, like walnuts, pistachios or pecans, though the traditional nut used is almonds. You can make it by grinding whole almonds in a food processor, but I find it much easier to use almond meal or almond flour instead. Feel free to use either flour or meal, though the meal has the almond skins on it and result in a slightly more bitter filling which adds an interest dimension to the filling.

Can I use a different flour than rye?

This tart uses rye flour which is a dark flour that is often associated with pumpernickel and heavy rye bread. Often rye bread is flavored with caraway seeds. But rye flour by itself tends to be nutty, and almost malty flavored, with touches of caramel and butterscotch. It has an earthy soft depth to it that tastes nothing like caraway seeds.

I use rye flour in my homemade soft rye pretzels, my rye brownies with caramel and my salted double rye chocolate cookies. And the rye flour in this tart crust adds a great dimension and flavor to the dessert. But if you don’t have rye flour, or don’t feel like buying it, you can easily swap out the same amount of all-purpose flour or whole wheat flour in its place and still have a delightful dessert.

Can I use a different pan for this tart?

However, if you don’t have a tart pan this size, you can totally make this in a 9-inch or 10-inch round tart pan with a removable bottom. Bake as directed. And if you don’t have a tart pan, you can also use a 9-inch or 10-inch springform pan, the kind that you make a cheesecake in. Just don’t press the crust dough all the way on the spring form pan. You only need about 1-inch of dough all the way around the sides of the pan.

Because a springform pan has taller sides, heat won’t reach the center of the filling as easily. So you may need to increase the bake time by 5 to 10 minutes.

Can I use a different fruit?

Yes! Play around with this recipe by subbing out a pitted and sliced stone fruit like peaches, nectarines, plums or cherries. Bake as directed but keep an eye out on bake time, as some fruit cook faster than others.

How do you store this tart?

Store this tart in the refrigerator, in an airtight container, for 1 to 2 days.

If you like this apricot tart, check out these other summer fruit recipes: 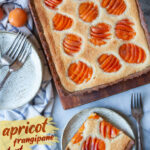 Fresh apricots, fragrant almond frangipane and a nutty, malty rye crust all come together in this easier-than-it-looks tart. I use a touch of rye whiskey in the filling to give it a little dimension (and because I like the idea of using rye whiskey with a rye crust). Feel free to substitute out bourbon, plain whiskey, or something like Southern Comfort or dark rum in its place. If you are avoiding alcohol, just omit it, and add 1 tablespoon of orange juice or water in its place.
Course Dessert, Snack
Cuisine American
Keyword almond, apricot, frangipane, fruit, tart
Prep Time 30 minutes
Cook Time 45 minutes
Chilling Time 20 minutes
Servings 12
Calories 294kcal
Author Irvin

This blog currently has a partnership with Amazon.com in their affiliate program, which gives me a small percentage of sales if you buy a product through a link on my blog. I only recommend products (usually cookbooks, but sometimes ingredients or equipment) that I use and love, not for any compensation unless otherwise noted in the blog post. If you are uncomfortable with this, feel free to go directly to Amazon.com and search for the book or item of your choice.
9shares