This easy rustic plum galette has a layer of almond frangipane elevating the already sophisticated looking dessert to a new level! (Jump directly to the recipe.) 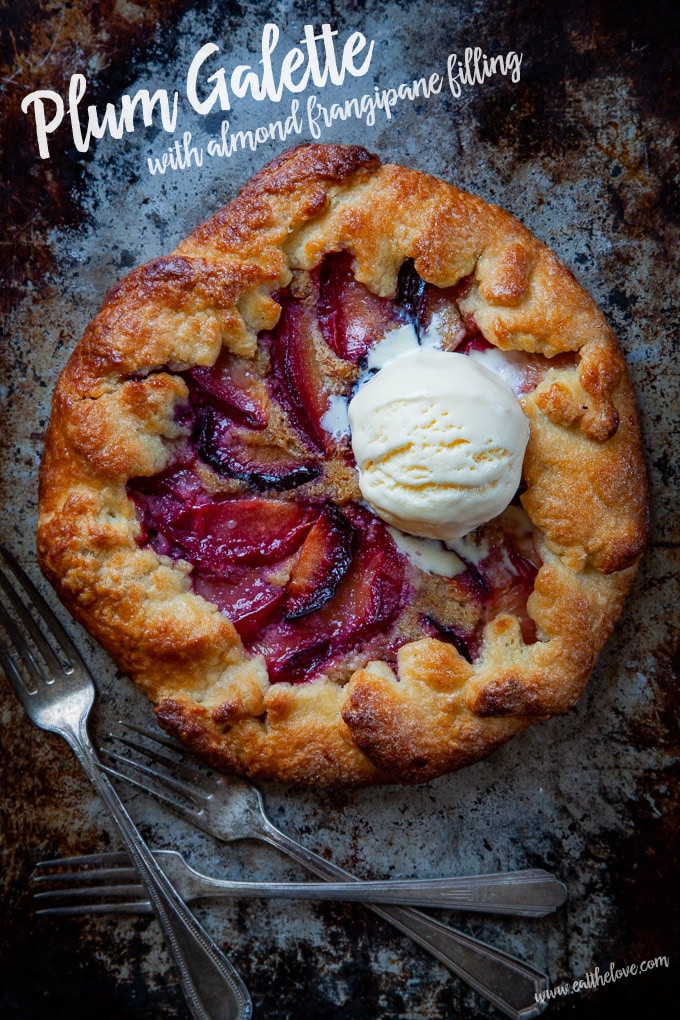 Summer is nearly over and I’m holding on to it and our summer road trip memories. From driving through Colorado and walking through the Garden of the Gods, to chasing waterfalls at Shenandoah National Park to tracking down lighthouses in Maine’s Acadia National Park, it’s been a transformative summer for me. On top of it all the gorgeous things that I saw and did, I took a long break from social media (other than sharing via Instagram Stories, which I have continued to do, mostly for myself) and I haven’t really looked back. And with the last gasp of summer produce, I made this plum and pluot galette with frangipane filling for a summer pie class that I taught when I got back home to San Francisco. It’s based on my honey-mead poached pear galette in my cookbook Marbled, Swirled, and Layered but is a little easier because you don’t to poach the fruit ahead of time. 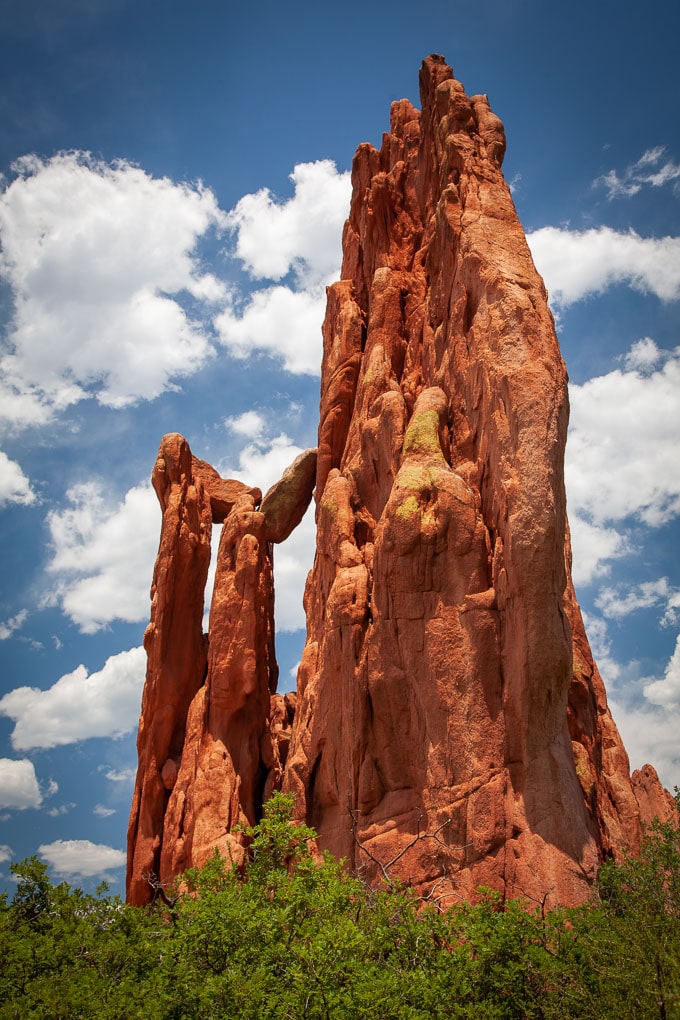 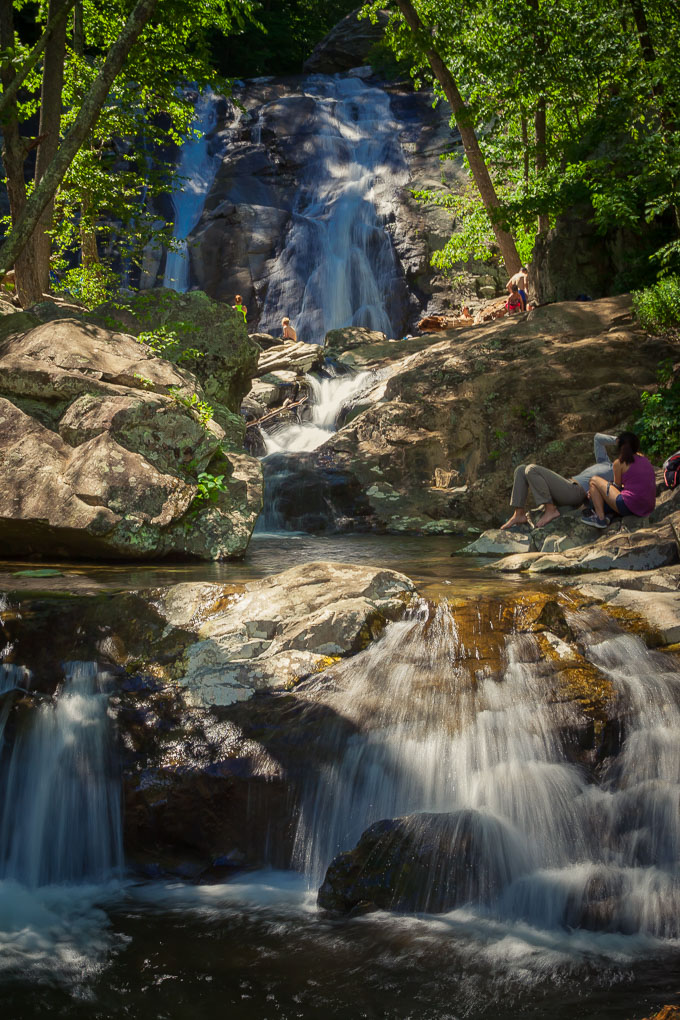 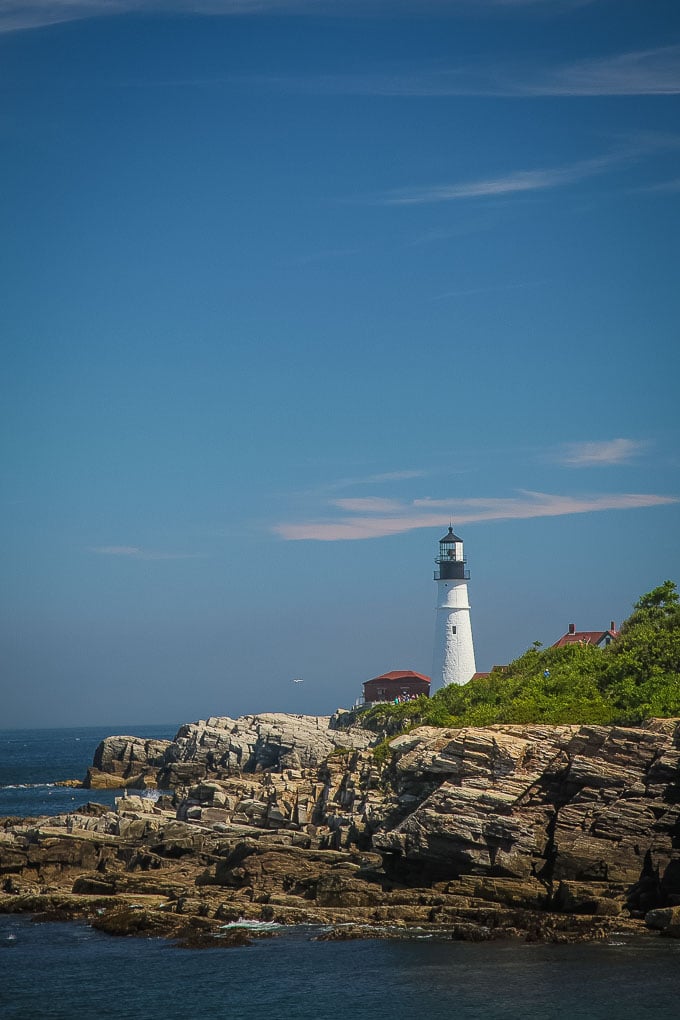 I’m slowly getting back into the routine of things at home. In fact, even though I hadn’t really adjusted to life not on the road (why do I have so much stuff? I lived 7 weeks out of car, and now I have an entire apartment of stuff to deal with), I have already taught two pie making classes at the San Francisco Cooking School where I made this galette and have gotten back into the ceramic studio, where I’m busy learning the ins and outs of the technical aspect of pottery and running a studio (mixing glazes, learning to fire the kiln and how to mix up clay from scratch), and been to a major San Francisco outdoor event (Opera in the Park). 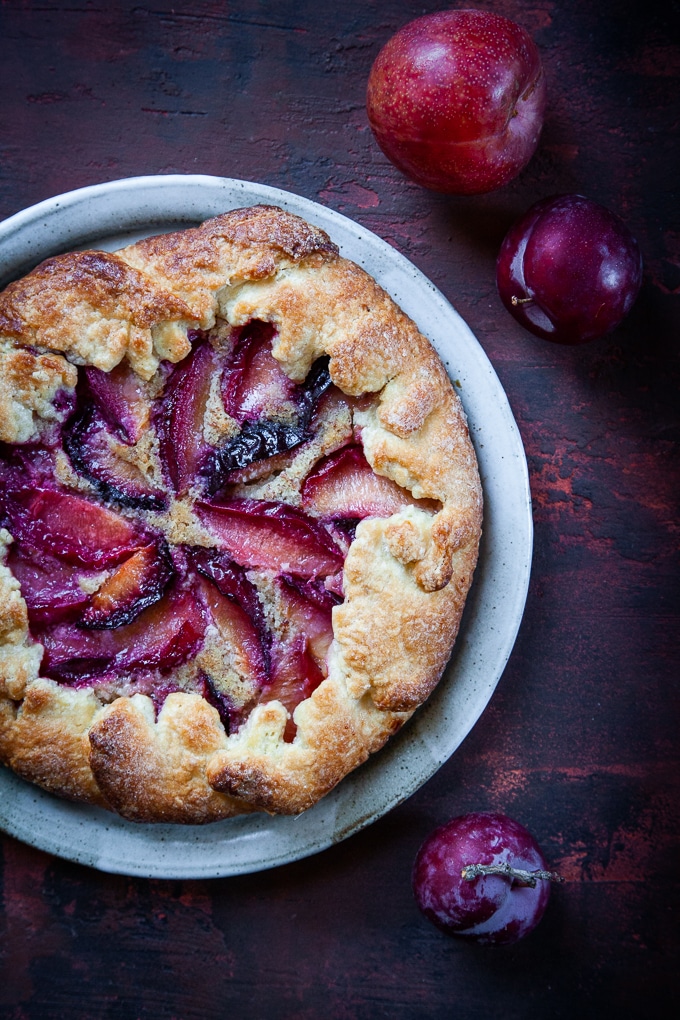 As I slowly get back to the routine of life at home, I’m trying to figure out how to incorporate all that I learned on our road trip about being in the moment, into my everyday life. That means a little bit less social media sharing, and a little more being in the moment. It also means my partner and I have been doing a massive sweep of our apartment, to get rid of all the clutter and junk that we just don’t need in the house. I won’t say that the summer road trip was transformative, but it was a good reset of my priorities. 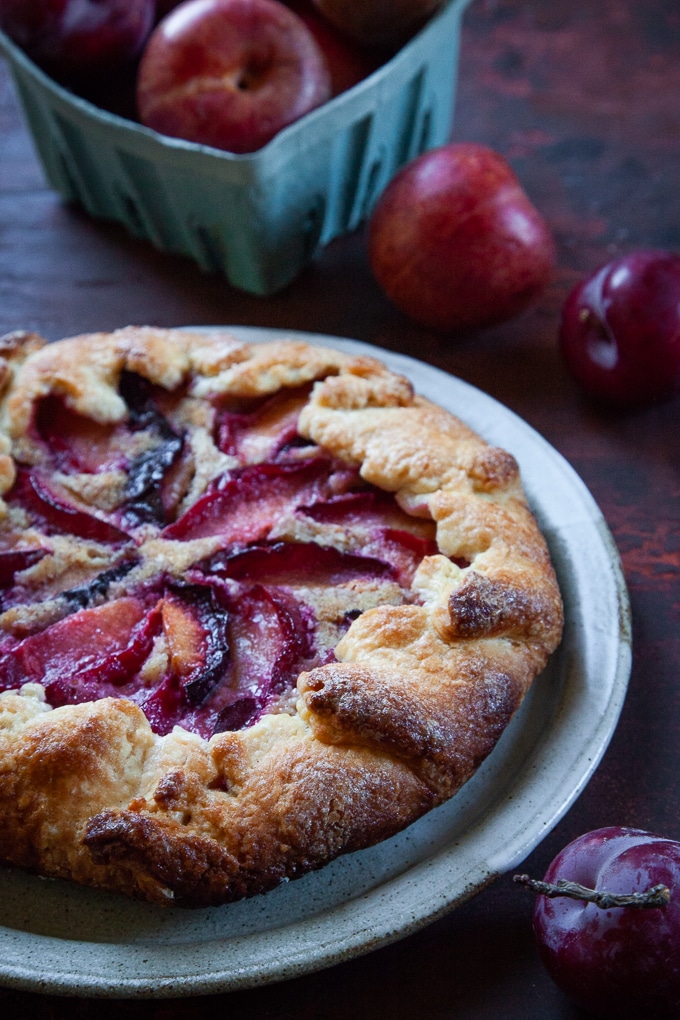 It’s all a work in progress though. But that’s OK. If it’s one thing I learned on our roadtrip, is that everything, including our country, is a work-in-progress. We’re all trying our best. And if that means a little bit of checking the phone as I wait for my galette to bake, I’m ok with that. In the end, I’m not an all or nothing sort of guy. I’ve always been most comfortable somewhere in the middle, constantly ebbing and flowing. Now excuse me while I run out to the store to get more plums and pluots. I need to make this galette one more time before the season is over. 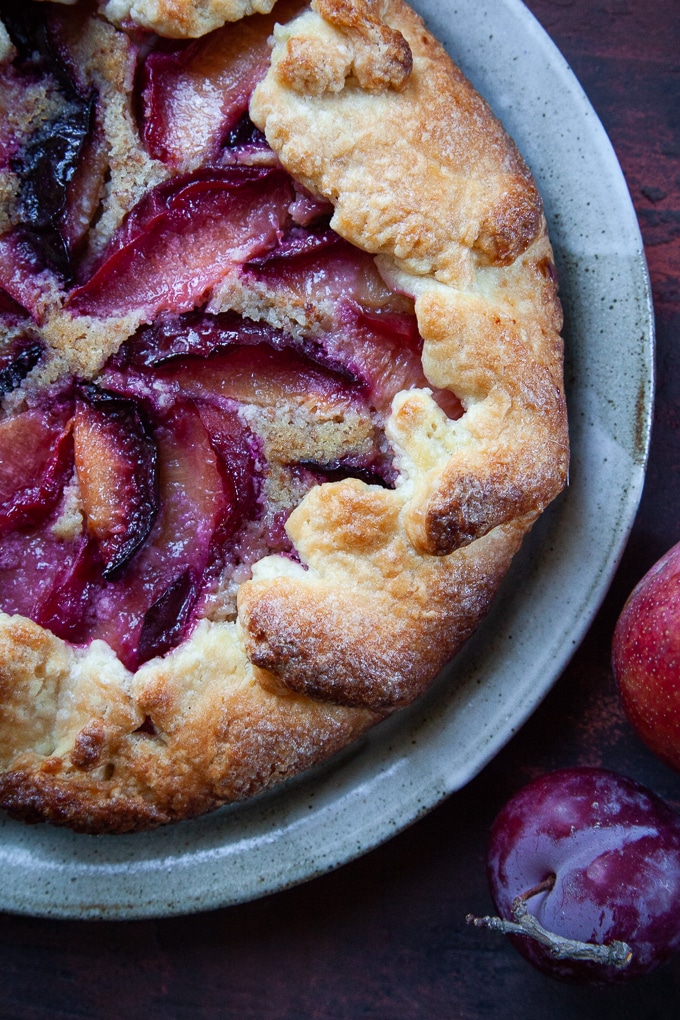 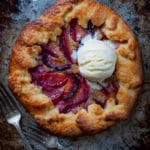 Galettes are freeform pies made and baked on a baking sheet. Because they don’t have the pie pan underneath it to give it structure, the crust is often rolled out thicker (about 1/3-inch to 1/4-inch thick as opposed a more traditional pie crust that is 1/4-inch to 1/8-inch thick). Because of the thicker crust, I’ve added an egg yolk to the crust to make it more tender. For this galette you can use plum or pluots (a hybrid fruit of apricot and plum, sometimes referred to as plumcots, peachcot, or apriums). The frangipane filling is easy to make. Almond meal still has flecks of the almond skin on it, so it’s has a bitter tinge which goes well with stone fruit. Almond flour has been blanched first, with the skin removed first before being ground, resulting in something more rounded and softer. Feel free to use either depending on what you have on hand and what sort of flavor you like.
Course Dessert
Cuisine American
Keyword almonds, crostada, frangipane, galette, plums, pluots, rustic dessert
Prep Time 45 minutes
Cook Time 45 minutes
Total Time 1 hour 30 minutes
Servings 8
Calories 290kcal
Author Irvin

Adapted from a recipe from my cookbook Marbled, Swirled, and Layered.

This blog currently has a partnership with Amazon.com in their affiliate program, which gives me a small percentage of sales if you buy a product through a link on my blog. I only recommend products (usually cookbooks, but sometimes ingredients or equipment) that I use and love, not for any compensation unless otherwise noted in the blog post. If you are uncomfortable with this, feel free to go directly to Amazon.com and search for the book or item of your choice.
1517shares