These traditional Swedish cardamom almond buns, called Semlor (Semla is the singular), are slightly sweet and an absolute delight to eat.

The weather has been cool and chilly here in San Francisco, though a little bit of gray sky and rain is nothing compared to the madness that other folks seem to be around the country with their snow storms and subzero temperature drops. All of it makes me want to snuggle down deep in my thick comfy sweater and embrace the Scandinavian hygge sensibilities. This probably explains why I’ve been baking things like my Swedish Blueberry Cake and Swedish Cardamom Buns (and also making and eating my Swedish Meatball Stroganoff which is totally comfort food).

But with Shrove Tuesday happening a bit ago (affectionately known as Fat Tuesday), I turned to make Swedish Semlor. The Semla (the singular word for Semlor) is an enriched cardamom scented brioche-style bun that is split open filled with almond paste and whipped cream. It’s a traditional Swedish treat eaten between Shrove Tuesday through to Easter in Sweden (and other Scandinavian countries) but they’re so much beloved, that they appear around Christmas time and are sold all the way through Eastertime. My friend Amy introduced them to me at a local Scandinavian restaurant here in San Francisco and I’ve been obsessed with them ever since. Turns out making them at home isn’t too hard!

What is a Semla or Semlor?

Semla (singular) or Semlor (plural) is a yeast risen bun that is flavored with cardamom and then often filled with almond paste and whipped cream, though other variants have them filled with fruit jam, chocolate or pastry cream.

In Sweden they are often served in a bowl of hot milk, though plenty of folks eat them on their own, or with coffee or tea. In other Nordic countries you’ll find variations of the Semla. Danish bakeries have a puff pastry filled with whipped cream and a dab of jam, while Finland and Norway semlor often add or use jam as the filling. Iceland semlor uses choux pastry, similar to a cream puff or an éclair, while the Faroe Islands also uses choux pastry filling with vanilla cream, whipped cream and jam, adding a chocolate icing on top.

How do you make a Swedish Semla?

There are three components to a classic semla, the sweet enriched brioche-style bread roll scented with cardamom filled, the almond filling, and the whipped cream.

You start making the roll by heating milk and butter in a small sauce pan until the butter is melted and the milk is warm. Stir in the yeast to dissolve, then mix it with an egg, sugar, flour, salt and some cardamom. Knead until a smooth elastic dough forms and let it rise until it doubles in size.

Once doubled, divide the dough into 12 pieces and let it rise again. Bake and let cool.

Once the buns are cooled, cut them open and cut out the inside bread. Add this to a blender or food processor, along with almond flour, milk and sugar. Process until a paste forms. Add the almond paste to the bottom of the bun and top with lightly sweetened whipped cream. Place the top back on the bun and dust with powdered sugar before serving.

Should I use almond paste, marzipan, almond meal or almond flour for the filling?

Most recipes you find online use almond paste (a combination of ground almonds, sugar and egg white as a binder) or marzipan (a firmer, more sweet almond paste with a smoother consistency that is often used to sculpture adorable edible treats). Because they are both a little hard to find (not to mention expensive) here in the United States I opted to make the filling using almond flour which is easier to source. You can find almond flour in well-stocked grocery stores or online.

I prefer the slightly sweeter and nuttier flavor of almond flour in this recipe. But you can use almond meal if that is what you have on hand. Just increase the sugar by 1 tablespoon, using 4 tablespoons of white sugar total. Keep in mind that almond meal often is a little more coarse in texture. So if you want a smooth paste, use finely ground almond flour or use commercial almond paste or marzipan.

Finally if you can’t find any of the ingredients above, just take some whole almonds (or blanched slivered almonds) and grind them yourself in a food processor blender! Use the same amount of almonds (1 1/2 cups or 180 g) and grind until you have a powder. Keep in mind that your resulting almond paste won’t be quite as smooth, as home ground almonds tend to be more coarse than the store-bought almond flour and meal.

Can you make these buns ahead of time?

Because of the high butter and milk in the bun dough, these buns get stale fairly fast. For optimum quality, they should be baked and enjoyed the same day.

If you do make the buns ahead of time, you can freeze theme unfilled. In fact, most folks don’t eat all 12 buns in one sitting. They will freeze the plain buns and then thaw out the number they want to serve and fill those thawed buns individually. Freeze the buns in a resealable ziplock bag or airtight container for up to 2 months. Let the buns thaw on the counter for 1 to 2 hour before splitting, filling and serving.

Can you use instant yeast or fast acting yeast in this recipe?

Yes! Use the same amount of instant or fast acting yeast but keep in mind that they will both work faster than regular active dry yeast. So check the dough and see if it has doubled in size as early at 45 minutes after letting it rest to rise.

If you use instant yeast, you do not have to dissolve it in the milk. You can add it when you add the flour, sprinkling it in with the remaining dry ingredients.

If you like this semlor recipe, check out some of these other sweetened yeast risen bread recipes: 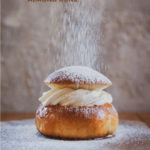 This blog currently has a partnership with Amazon.com in their affiliate program, which gives me a small percentage of sales if you buy a product through a link on my blog. I only recommend products (usually cookbooks, but sometimes ingredients or equipment) that I use and love, not for any compensation unless otherwise noted in the blog post. If you are uncomfortable with this, feel free to go directly to Amazon.com and search for the book or item of your choice.
363shares