You are here: Home / chocolate / Pumpkin Monkey Bread with Chocolate

This pumpkin monkey bread also has chocolate dough mixed in for a crazy looking fun treat that easy to make! (Jump directly to the recipe.) 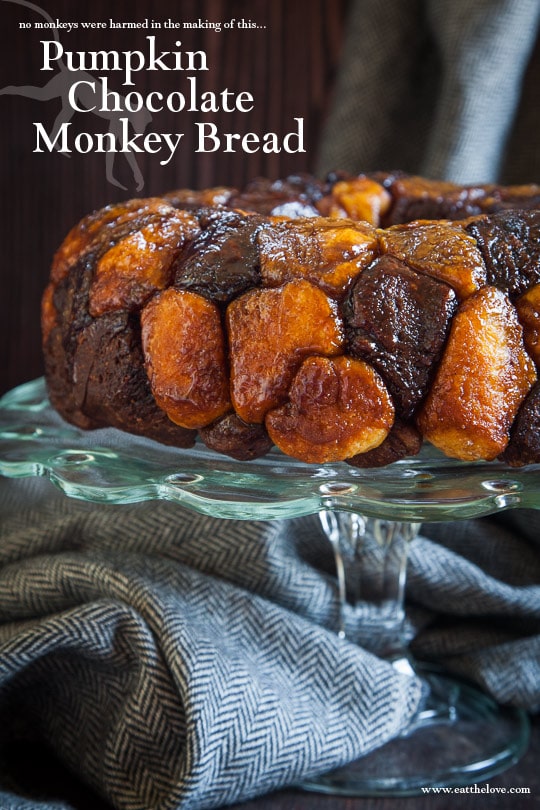 I stared at the last three chunks of pumpkin chocolate monkey bread and they did NOT look appealing. I hadn’t been expecting us to eat ALL the monkey bread that I made but AJ pretty much couldn’t stop eating it and I was right behind him. Between the two of us, we made short work of the monkey bread, leaving only three last chunks left. Three chocolate chunks in fact. And the chocolate chunks…well lets just say they looked like the sort of chunks that a monkey would throw at you (if you know what I mean…), NOT the sort of chunks you’d want to eat. Ha! But I finished them up completely because I wasn’t one to let a chunk of the monkey bread go to waste. 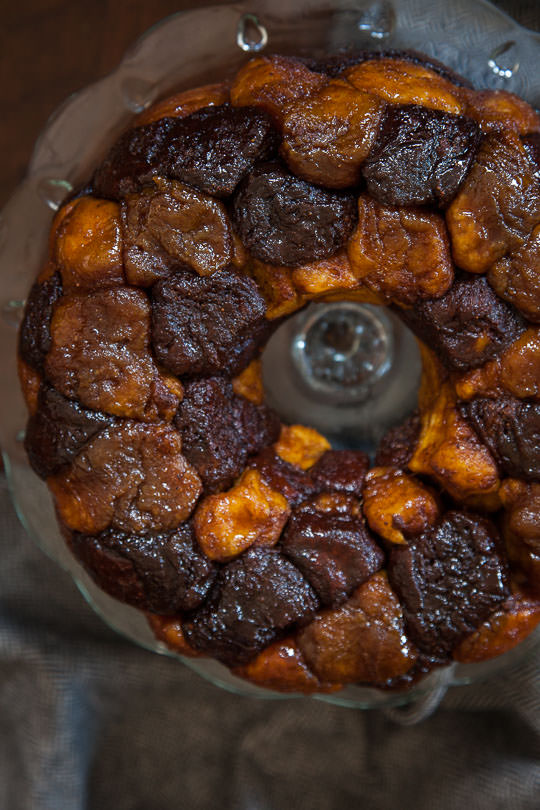 I’ve been developing recipes nonstop for my cookbook, which means I’ve also been sharing less baking and dessert recipes here on the blog because I’m saving them for the book. Instead I’ve been posting a lot of dinners and meals, something that I’m enjoying. But I do miss the ability to share an awesome baking recipe right away and though I thought about keeping this one for the cookbook (and who knows, it might end up there in one form or another) I knew I had to share it with you right away. 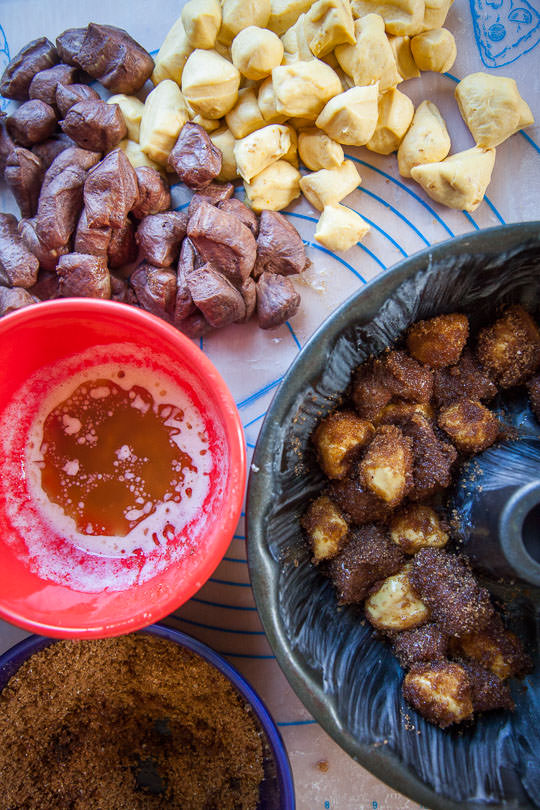 Monkey bread, sometimes called sticky bread, monkey puzzle bread, bubbleloaf or pinch-me cake is made of chunks of sweet yeasted dough rolled in brown sugar and pumpkin spice. It’s easy to make and fun to eat. If you don’t have pumpkin spice, use 1 1/2 teaspoon ground cinnamon, 1/2 teaspoon ground ginger, 1/4 teaspoon nutmeg, allspice and cloves and mace in it’s place. This version of pumpkin monkey bread is a alternating mix of chocolate and pumpkin dough, which is easy to make by first making a sticky pumpkin dough and then splitting it in half, kneading a little extra flour to one half and a little cocoa powder to the other half. So easy, even a monkey can make it! 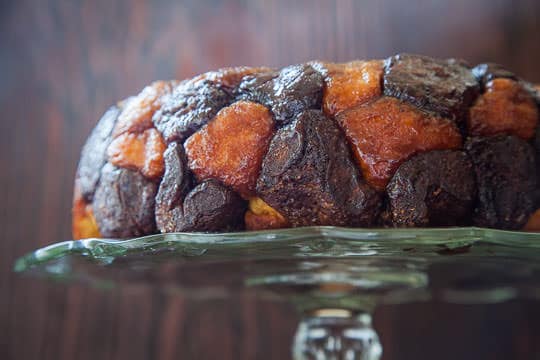 Directions
1. Place the milk in a small pot and heat it up over medium high heat for about 5-10 seconds or until it’s warm to the touch but not hot. Remove from heat and add the sugar and melted butter, whisking together. Sprinkle the yeast over the warm milk and beat with a fork to dissolve. Let sit for 5 minutes until foam starts to appear on the top of the milk.

2. Place the milk in the bowl of a stand mixer fitted with a paddle attachment. Add the pumpkin puree and the vanilla to the milk along with 3 cups of the flour (reserving the 1/4 cup or 35 g for later) to the bowl. Stir on slow speed until a sticky dough forms. Add the kosher salt and stir again on slow speed until incorporated. Divide the dough in half and reserve one part of it in a medium clean bowl. Leave the second part in the mixer bowl and replace the paddle attachment with the dough hook attachment. Add the reserve 1/4 cup (35 g) flour to the dough and knead the dough for 2 minutes on medium speed.

3. Swap the doughs, moving the stickier dough back to the mixing bowl and the already kneaded dough to the reserve bowl. Add the 1/4 cup (35 g) cocoa to the bowl and knead for 2 minutes on medium speed. Remove the chocolate dough, and give the bowl a light coating of cooking spray, then place the chocolate dough back in the greased bowl. Cover with plastic wrap and repeat the process with the pumpkin dough in the reserve bowl, greasing and covering with plastic wrap. Let rise for 1 1/2 to 2 hours or until the dough has doubled.

4. While the dough is rising, prep the bundt pan by brushing it with some of the melted butter from the coating. Make sure to brush the entire inside of the pan. Place the brown sugar, salt and pumpkin spice in a medium bowl and toss with a fork until combined. Once the dough has risen, Cut each dough into about 30 small bite size pieces, 60 pieces in all. Roll one piece of pumpkin dough in the butter and then in the sugar mixture and place in the greased bundt pan. Repeat with a piece of the chocolate dough, alternating chocolate and pumpkin dough in the bundt pan until all the dough is used up. Cover with plastic wrap and let rise for 1 hour or until the dough has risen to the top of the bundt pan and is poking against the plastic wrap. 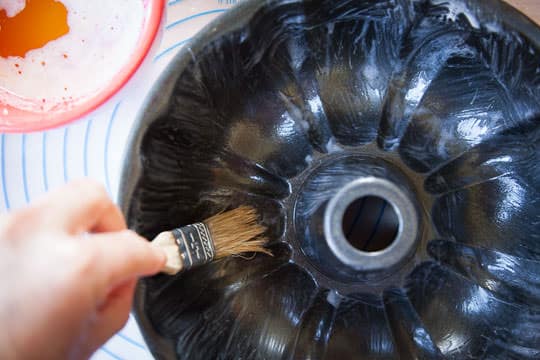 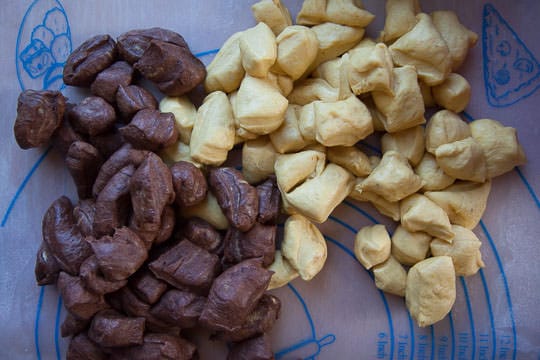 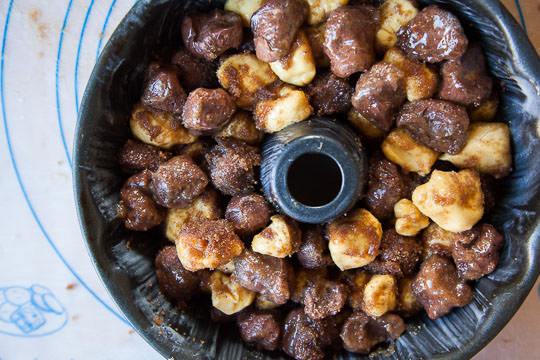 5. Once the dough looks like it’s almost there, preheat the oven to 350˚F. Once the dough has completely risen, place in the oven and bake for 35 to 40 minutes or until the top of the monkey bread looks golden brown. Let cool in the pan for about 5 minutes then invert onto a serving plate and remove the pan immediately. Don’t let the bread cool in the pan too much or it’ll stick. Pick apart and eat the chunks as soon as it’s cool enough to eat!

Makes 8-12 servings. Or two adults with no willpower.

If you like this Pumpkin Chocolate Monkey Bread recipe, check out a few other recipes on my blog that combines those awesome flavors:
Pumpkin Cheesecake Brownies
Pumpkin Pie Cheesecake Bars with White Chocolate Vanilla Swirl
Almond Biscotti with Kahlúa Pumpkin Spice

This blog currently has a partnership with Amazon.com in their affiliate program, which gives me a small percentage of sales if you buy a product through a link on my blog. I only recommend products (usually cookbooks, but sometimes ingredients or equipment) that I use and love, not for any compensation unless otherwise noted in the blog post. If you are uncomfortable with this, feel free to go directly to Amazon.com and search for the book or item of your choice.
1992shares