This roasted Delicata squash and Brussels sprouts dish has a pomegranate sweet and sour agrodolce making it an easy, sophisticated side dish.

This post was sponsored by California Grown. I was compensated for this post and developing this recipe. However, all opinions below are my own.

Back in October, I was lucky to go on a tour with California Grown of California’s San Joaquin Valley, an agriculturally rich area that grows over 250 different crops. We visited kiwi farms, watched fresh figs get packaged, rode a modified grape harvester to harvests dried-on-the-vine raisins, visited a winery and picked pumpkins at a pumpkin farm. And we ate SO. MUCH. FOOD.

Our trip coincided with California Farmer and Farmerworker month and after watching the workers working the fields, I can 100% say, they deserve to be celebrated all year round! The food they harvested is distributed throughout the country but after a day of hanging out in the pumpkin field picking pumpkin squash and decorating gourds, we were lucky enough to dine on some local grown food at Trelio in Clovis, California. At dinner I had some amazing food, including some eggplant with agrodolce and a shaved fennel salad with pomegranate vinaigrette. Taking all that as inspiration, I created this roasted Delicata squash and Brussels sprout dish with pomegranate agrodolce, the perfect fall and winter side dish for your holiday table (or really any time of year).

How to make this dish

This recipe is surprisingly easy to make. Prep the Delicata squash by cutting it lengthwise and scooping out the seeds. Then cut the squash into half moon crescents. Cut the Brussels sprouts in half. Toss both with olive oil, salt and pepper. Then roast in the oven.

Halfway through the roasting, flip the Delicata squash, toss the Brussels sprouts, and add in some red onion slices also tossed with olive oil, salt and pepper. While the vegetables are roasting, make the agrodolce by combining red wine vinegar, balsamic vinegar, pomegranate molasses, maple syrup, some fresh thyme, and a piece of orange zest in a small pot. Simmer for 10 minutes.

Once the vegetables are done, move them to a serving plate and drizzle with the agrodolce. Sprinkle with some fresh pomegranate seeds and serve.

Agrodolce is an Italian sweet and sour sauce. The word “agro” means sour and the word “dolce” means sweet. Often it is made by reducing vinegar and sugar together, but it’s a super versatile condiment, with the sour acidity varying from white wine vinegar, sherry vinegar, apple cider vinegar or even citrus juice. Sweeteners can be honey, sugar, maple syrup, or brown sugar. And you can add in dried fruit or spicy peppers to give it a kick.

What is Delicata squash

Delicata squash is my favorite winter squash because it requires very little prep work. A lot of winter squashes require you to peel or remove the rind of the squash, or they are very large and require a lot of time to cook. But the Delicata squash skin is thin and edible, and the orange interior is sweet and creamy, similar to a butternut squash.

It also tends to be easier to work with, as it has a long oblong shape, not too big, and isn’t too unwieldy on the cutting board. It’s a good source of fiber and potassium, though it doesn’t have a lot of beta-carotene like other squashes do. And yes, the seeds are also edible, toast them up just like pumpkin seeds, then turn the roasted seeds into candied pumpkin seeds if you want!

How do you seed a pomegranate

You can buy pre-seeded pomegranates at the store, but seeding whole pomegranates, is easier than it looks. Just do a shallow cut around the top of the pomegranate and peel off the top.

Once you’ve sliced down the sides, just pull apart the pomegranate, then gently push the seeds out into a bowl. Stored pomegranate seeds in the fridge for up to 5 days.

Can you make this ahead of time?

Yes! The roasted vegetables can totally be made ahead of time. Let them cool completely and don’t add the agrodolce. Right before serving, heat them up again in a 350°F oven for 10 minutes, or in the microwave. Then drizzle the agrodolce over them, and sprinkle with the pomegranate seeds.

Leftovers can keep in the fridge for up to 3 days in an airtight container.

About the farm tour

California’s San Joaquin Valley is one of the most prolific agricultural areas in the world. I was lucky enough to visit the area in the Autumn time to learn more about where my food came from. Here’s some of the places and things I learned

Sweet Thistle Farms was a family-owned flower and pumpkin farm, where I picked a Long Cheese pumpkin off the vine (it looks like a wheel of cheese, but it has a buttery orange flesh like a regular pumpkin). The farms shares land with Rocky Oaks Goat Creamery, and we got to sample the fantastic goat cheese as we decorated mini pumpkins.

Quady Winery specializes in sweet dessert wines and vermouths. We did an extensive tasting and then saw them crush some of the last grapes of the season.

Catania Worldwide showed us how they grew kiwis, which grew like grapes on a trellis. I actually didn’t even know that kiwis grew in California! Afterwards we went to the packaging plant and saw the kiwis being packaged which was fascinating. Those workers work fast!

Our final famer tour was at River Ranch Raisins which had us actually climbing onto a modified grape harvester and going up and down the rows of grape vines, where the raisins were dried on the vine (DOV). The Selma Pete Raisins dry and the sugars caramelize slightly in the sun, making them super sweet, plump and juicy. Riding the harvester was surprisingly fun, watching the farmers carefully make sure they were driving between the rows, as the combine shakes the grapes and then lifts them up in a conveyor belt, then drops them into a separate tractor with giant bins. I’m still obsessed with those raisins and I think once pomegranate season is over, I might try adding some of the raisins into the agrodolce while it cooks down. 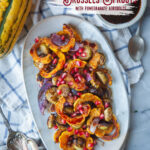 This easy vegetable side dish requires very little work, as the vegetables roast in the hot oven. Make sure to cut the Delicata squash into the same size pieces so they cook evenly. Try to find medium to large Brussels sprouts for this dish and cut them in half. If you have smaller ones, just leave them whole. If the Brussels are too small, they’ll overcook. You want them nicely charred but not black.
Prep Time 15 minutes
Cook Time 30 minutes
Servings 6 servings
Calories 185kcal
Author Irvin

This blog currently has a partnership with Amazon.com in their affiliate program, which gives me a small percentage of sales if you buy a product through a link on my blog. I only recommend products (usually cookbooks, but sometimes ingredients or equipment) that I use and love, not for any compensation unless otherwise noted in the blog post. If you are uncomfortable with this, feel free to go directly to Amazon.com and search for the book or item of your choice.
0shares