These easy-to-make roasted radishes and Brussels sprouts side dish is drizzled with lemon brown butter and screams springtime!

Our apartment smells like Spring. I’m not talking about a wafting smell of rhubarb or early strawberries or fresh cooked sugar snap peas. I’m talking about the fact that we finally were able to open our windows, after a miserably rainy season of wintertime cold, and breath the fresh air. We haven’t turned on the heat in a few days, and as I worked away in the kitchen, I opened the door to let in a little bit of Springtime light. And that’s when it hit me, Spring is here, at least in San Francisco, and I’m embracing it head on.

It’s funny how much weather can drastically impact your mood. I’m not one to severely suffer from seasonal affective disorder; at least not more than that average person. But there’s something to be said about the bright sunlight and outdoor air that will put me in a good mood. And with the fresh air (as fresh as you can get in a major metropolitan city like San Francisco) I found myself heading to the grocery store to pick up some Spring produce.

Radishes aren’t my usual go-to Spring vegetable. I tend to gravitate toward asparagus or sugar snap peas (or rhubarb if I can find it, though it’s still a little too early for me to find here). But when I saw the various different types of radishes at the store, including Watermelon, purple and Easter egg, I knew I had to pick up a bunch. Their sharp peppery bite is great in salads and as a vehicle for my hummus.

But when you roast radishes, that peppery bite mellows and softens into an earthy rich buttery treat. Paired with a nutty roasted Brussels sprouts and a drizzle of lemony brown butter, one bite had me realizing that Springtime was truly here. Longer days, shorter nights, and short sleeve t-shirts. I’m ready.

What the differences between the radishes at the store?

Like all vegetables, radishes come in all shapes and sizes. The most common ones are the red radishes, with a peppery bite, the French breakfast radish which sounds and looks fancy with their cylindrical shape and crisp texture and Easter Egg radishes. Easter egg radishes bunch, which are basically the “rainbow carrots” of radishes, are actually a mix of pink, white, purple, and red varieties which lend a bright mix of colors to any dish. I also have a fondness for watermelon radishes, which, like their namesake, is colored white-ish green on the outside and pink on the inside and are less peppery and milder in flavor than the traditional red radish. You can find them at upscale grocery stores and farmer’s markets when they are in season.

Whatever radish you choose to use, be sure to cut them into roughly the same size for roasting. This will keep help them cook at the same time. I try to cut the Easter egg radishes in half, while quartering and even cutting the larger radishes (like the watermelon one) into 6 pieces.

How to make brown butter

After roasting the radishes and the brussel sprouts, you can drizzle lemony brown butter over the vegetables. Brown butter is easy to make, but can run the risk of burning. If you have never made brown butter before, pick a silver or light-colored skillet so you can see the color of the butter fat as it browns. Cook the butter in the skillet, and remove the pan from the heat the moment you see the butter fat start to brown and smell the nuttiness. The residual heat will continue to cook and brown the butter. If the butter isn’t brown enough for your taste, you can always return the pan to the stove and put it on a low heat, nudging the butter to a toasty golden brown. But if you take it too far you’ll have to start over again, as the butter will taste burnt.

What if you hate brussels sprouts?

We can’t be friends. Just kidding! No problem. You can always just double the amount of radishes in this dish and still have a great dish. Or try cutting the same amount of carrots or another root vegetable and using that in its place of Brussels. But if you’ve never had roasted brussels sprouts, give them a chance before dismissing them. The high heat roasting gives them a nuttiness while the brown butter brings out the sweetness in them. Also consider buying smaller sprouts, as they tend to be younger and sweeter than the larger sprouts. 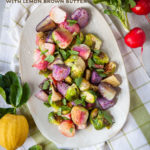 Radishes melt into buttery goodness when roasted in the oven. Paired with nutty Brussels sprouts the combination is a quick and easy side dish for a weeknight meal. Brown the butter on the stovetop while the vegetables are roasting. And don’t discard the radish tops if the radishes come with the still attached. The edible greens can be used to add a garnish for the dish adding a brightness to the dish.
Course Side Dish
Cuisine American
Keyword brussels sprouts, radish, roasting, root vegetables, side dish, spring
Prep Time 10 minutes
Cook Time 20 minutes
Total Time 30 minutes
Servings 4
Calories 205kcal
Author Irvin

This blog currently has a partnership with Amazon.com in their affiliate program, which gives me a small percentage of sales if you buy a product through a link on my blog. I only recommend products (usually cookbooks, but sometimes ingredients or equipment) that I use and love, not for any compensation unless otherwise noted in the blog post. If you are uncomfortable with this, feel free to go directly to Amazon.com and search for the book or item of your choice.
199shares