This spicy guacamole recipe, with grilled corn and grilled avocado is possibly the best guacamole ever. (Jump directly to the recipe.) 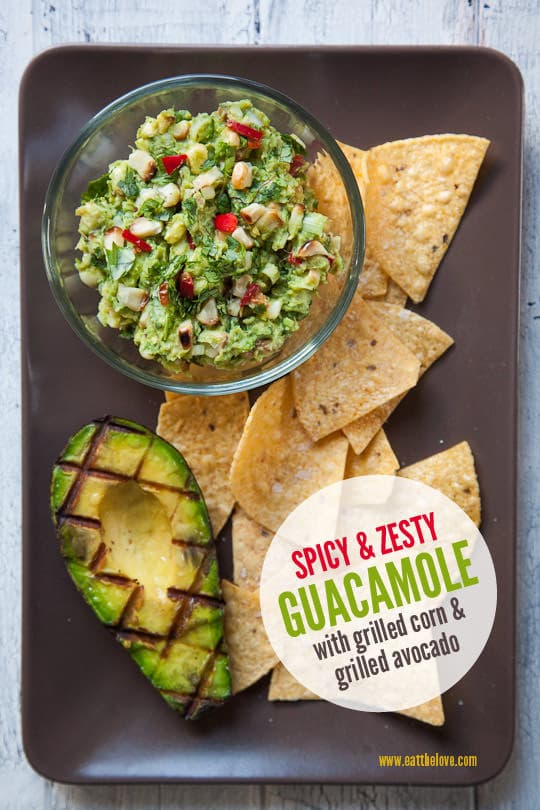 “Did you make this spicy guacamole recipe up yourself?!?” asked my friend Tom, with is eyes wide open and a look of awe in his face. I nodded my head, a little alarmed at how intense his reaction was to it. “This. Has. To. Be. The. Best. Guacamole. Ever.” He said, dramatically pausing between each word to emphasis how serious he was. Tom has a habit of being a little drama queen when it comes to…well everything. But when he likes something he’s not afraid to show it. Apparently he really liked my spicy guacamole recipe enough to deem it the best ever. 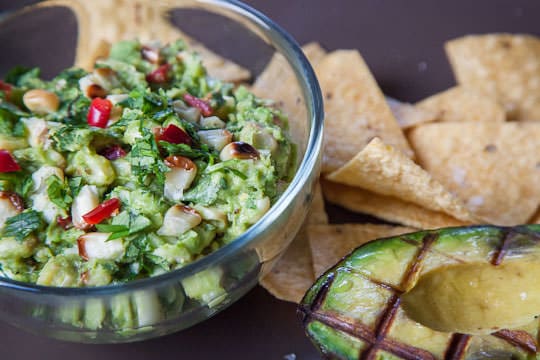 I rarely make guacamole, not because I don’t love it, but more because if we have it in the house, AJ and I will eat it nonstop. Like NONSTOP nonstop. I’ve been known to absentmindedly sit down with a book, a bag of tortilla chips and a bowl of guacamole and before I know it, I’m three chapters in and dipping my chip into an empty bowl. It’s a bad situation all the way around, though I tell myself that avocados are good for me (the chips on the other hand…) so I don’t feel too bad about it. Still the amount of avocados I might go through if we made guacamole in our household would be insane if I made it on a regular basis. So I stick to making it for special occasions. 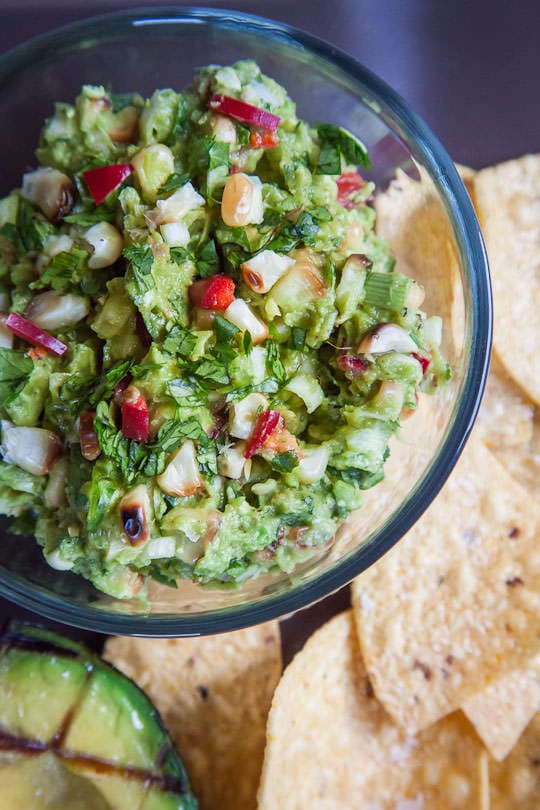 The funny thing about guacamole is that even though it’s pretty simple in nature (mashed avocado with some other seasonings) it’s nearly infinitely malleable with the variations. My pal Gaby of What’s Gaby Cooking has a whole chapter on guacamole in her book Absolutely Avocado and still she has a bijillion more versions of guacamole on her blog! Of course, she’s obsessed with it. I can’t blame her. To proclaim one or another recipe as the best is sort of like choosing between children I imagine. But apparently my friend Tom has no problem with that sort of Sophie’s Choice. My guacamole is the best one. Who am I to argue with a drama queen?

Spicy Guacamole, The best guacamole ever

The secret to making this fiery hot and spicy guacamole recipe is to not only grill the corn that goes into the guacamole, but also to grill the avocados! Yes, you can grill avocados. By grilling both, you get an extra smoky depth to the guacamole. If you don’t have a grill, don’t worry, just stick the corn in under your broiler and cook for 5 minutes, then rotate 1/4 for another 3 minutes until both corn ears are charred on all sides. You can also use a ridged pan to “grill” the avocado on the stovetop, just make sure to get the ridge pan as hot as you can before you place the avocado on there, to get the nice grill mark lines.

I also use spring garlic (sometimes called green garlic) in this recipe, which is a young mild version of garlic that looks like a green onion on steroids. It’s all sorts of awesome (I love using it vinaigrette and egg dishes) but it can sometimes be hard to find. Keep an eye out for it at farmers markets and upscale grocery stores like Whole Foods, but if you can’t get ahold of it or it’s out of season (it’s only available in late Spring and early Summer) just substitute one peeled garlic clove forced through a garlic press or minced fine and 3 green onions chopped, in it’s place. Finally, I only use 1 red Serrano pepper because of mixed company and their tolerance for heat but when I’m alone I usually kick the heat up by adding 2 or more. 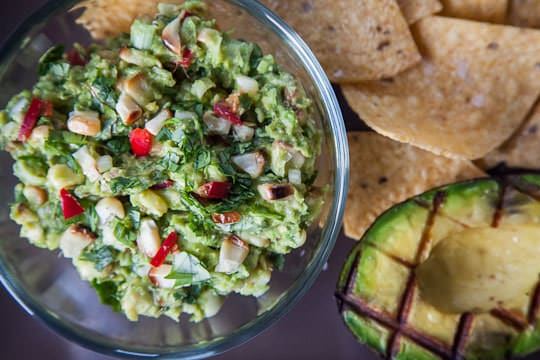 Directions
1. Fire up your grill to high (if you don’t have a grill see the headnote above for alternative directions) and as it heats up, husk the corn making sure to remove as much of the silk as possible. Place the corn directly over the heat on the grill and watch it as it the corn kernels start to darken and char, keeping an eye to make sure corn doesn’t burn. As the side facing the heat cars, rotate the corn 90˚ and continue until the entire ear of corn is cooked and started to char a bit.

2. While the corn is grilling, split the avocado lengthwise and remove the seed. Brush the avocado with the oil and place cut side down on the grill directly over the heat, diagonally. Let it grill for 2 or 3 minutes, or until marks form avocado meat. Rotate the avocado 90˚ on the grill and let sit for another 2 minutes. You should now have criss-cross marks on the avocado.

3. Remove the corn and the avocado from the grill and let cool down. While they are cooling, chop the Serrano pepper (with the seeds) and place in medium bowl. Chop the white and light green part of the spring garlic (reserving the dark green part for another use) and place in the bowl with the pepper. Add the cumin, salt, pepper, and lime zest in the bowl.

If you like this Spicy Guacamole Recipe, check out these other recipes from around the web that feature guacamole as an ingredient

This blog currently has a partnership with Amazon.com in their affiliate program, which gives me a small percentage of sales if you buy a product through a link on my blog. I only recommend products (usually cookbooks, but sometimes ingredients or equipment) that I use and love, not for any compensation unless otherwise noted in the blog post. If you are uncomfortable with this, feel free to go directly to Amazon.com and search for the book or item of your choice.
3287shares