This traditional lamb tagine with California Prunes is a Moroccan classic recipe streamlined into a one-pot dish that doesn’t require any special equipment!

This post is sponsored by California Prunes. I was compensated for this post and for developing the recipe. However, all opinions below are completely my own. Be sure to check out California Prunes online at www.CaliforniaPrunes.org and on social media @CAprunes.

My partner AJ absolutely loves meat – all sorts of meat. Common meat like chicken, beef and pork elicit the same response: “Oh roast chicken is my favorite!” or “Woo hoo, we’re having grilled skirt steak tonight!”, while less common meats like rabbit, ostrich or lamb also create the same reaction of “Oh hey, we’re gonna have ostrich!” and “YAY! Rabbit pot pie!”. So, it came as no surprise that he exclaimed “Lamb! I LOVE lamb!” when I told him I was making lamb with California Prunes tagine for dinner.

Lamb with prunes is one of those classic Moroccan recipes, though most folks don’t think about the prunes part of the dish. In fact, I hadn’t really given prunes much thought, other than the usual “it’s a dried plum” sort of acknowledgement, until I went on a trip with California Prunes recently.

What fascinated me about the trip, other than learning about how they harvest the plums from the orchards and dried them into prunes, is the nutritional value of California Prunes. Sure, here in the United States, they’re probably best known for keeping folks…regular. But they are also a great source of different minerals and nutrients; they help with everything from prebiotic gut digestion to strengthening bones.

Of course, outside the U.S., prunes are a standard pantry staple. They appear all over African, Mediterranean and French cuisine recipes even though the vast majority of prunes (and definitely the best quality ones) are harvested and produced here in California.

But all that aside, the beauty of California Prunes is that though they are slightly sweet, they are one of those versatile ingredients that work in both sweet dishes and savory ones. In fact, they are a perfect (and often necessary) addition to those savory dishes that have a hint of sweetness in them. Lamb and California Prunes tagine is a great example. With the touch of honey along with the aforementioned prunes, the sweetness and the spices (cumin, cinnamon, saffron and paprika) all work to cut the richness of the lamb and balance the dish out.

A tagine is both the name of the actual food, a savory stew, as well as the traditional ceramic vehicle it is cooked in. The ceramic tagine is a two-part pot, with the bottom a shallow flat bowl where you place the ingredients, and the top being a conical shaped lid. The lid allows for the natural steam that forms when you are cooking the ingredients to rise and then condense and drip back down into the stew making for a moist and flavorful meal.

Do I need a ceramic tagine to make tagine stew?

Nope! You do not need a special piece of equipment to make a tagine stew. You can use a slow cooker or a large pot/Dutch oven in place of a tagine. I make my tagine stew on the stovetop letting the stew simmer at a low temperature, but some recipes place the pot in the oven and let the temperature of the oven do the cooking.

How do you make lamb tagine with California Prunes?

First you marinate the lamb meat in olive oil and spices. Then you cook the onions and garlic. Add the lamb and brown it on all sides. Add more spices and then cover the stew barely with water. Let it simmer for 90 minutes, then add the prunes, cinnamon stick and a drizzle of honey. Cook for an additional 20 minutes and you’re done!

How do you store lamb tagine with California Prunes leftovers?

Can you freeze lamb tagine with California Prunes?

Yes! Like beef stew, you can freeze the dish for up to 3 months in an air tight container. Freeze the lamb stew without any of the garnishes (almond slices, chopped parsley or sesame seeds). Remove the cinnamon stick before you freeze it as well. Thaw in the fridge overnight, then reheat and serve.

How do I reheat the tagine?

You can reheat the tagine in the microwave if you want. Just stir it ever 30 to 60 seconds to make sure it reheats evenly. The time you need to cook it in the microwave is dependent on the amount you are heating up.

Regardless of how you reheat the leftovers, you should add a little bit of water to help thin it down. Leftover lamb tagine tends to be thick, especially as the dried prunes absorb liquid and leftovers will need additional liquid for the sauce.

Can I substitute a different meat for lamb?

Lamb can be a polarizing meat. If you have had bad experiences with lamb or find it too gamey, try trimming off the fat from the meat before using it. The fat is what often times has the gamey flavor.

But if you really are lamb-averse, you can absolutely substitute a meat like beef instead. Just pick a cut of beef that you would use for beef stew, like chuck roast or a bottom roast in its place.

What should you serve Lamb Tagine with California Prunes with?

You can eat lamb tagine all by itself as a meal but I like to serve my lamb tagine with a side starch. Some suggestions include:

If you like this lamb dish, check out these other lamb recipes: 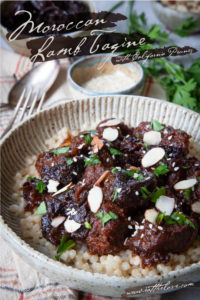 Don’t be scared of the long list of ingredients. This traditional Moroccan dish is easy to prep and made with not a lot of exotic ingredients. I’ve streamlined and simplified the dish so it’s all done in one pot (a large Dutch oven). But if you want to take it to the next level, I have notes at the bottom of the recipe on how to make it even more tasty with a few extra steps.
Course Main Course
Cuisine Mediterranean, Moroccan
Keyword lamb, Moroccan, prunes, stew, tagine
Prep Time 15 minutes
Cook Time 2 hours 15 minutes
marinade time 1 hour
Servings 4
Calories 1024kcal
Author Irvin

• To deepen the spice flavor, toast whole cumin seeds in a dry skillet over medium heat until they become fragrant. Let them cool, then grind in a spice grinder or mortar and pestle. • To give the meat more intense spice, marinate the lamb for a minimum of 4 hours, up to 8 hours for a more intense, complex flavor. • To make the dish more complex, sear the lamb meat in a separate different pan with 2 tablespoons of olive oil on medium high heat. Make sure each piece of meat has completely caramelized and browned on each side, before moving it to the Dutch oven with the onions. • To create a more traditional flavor, use 2 tablespoons olive oil and 2 tablespoons culinary Argan oil in the marinade. Use the culinary Argan oil in place of the olive oil when you cook the onions and sear the meat.

This blog currently has a partnership with Amazon.com in their affiliate program, which gives me a small percentage of sales if you buy a product through a link on my blog. I only recommend products (usually cookbooks, but sometimes ingredients or equipment) that I use and love, not for any compensation unless otherwise noted in the blog post. If you are uncomfortable with this, feel free to go directly to Amazon.com and search for the book or item of your choice.
627shares