This savory riff on the traditional corn pudding cuts out some of the sugar and adds in sautéed onions and fresh thyme for a great side dish!

Jump to the Recipe

Recently my husband and I became slightly obsessed with the AppleTV show Schmigadoon!, a comedy where a modern couple from NYC gets trapped in a golden-era musical town. It’s rather amusing, especially if you are a fan of musicals from the era, like Sound of Music, Oklahoma or Brigadoon. One of the musical numbers early in the show was “Corn Puddin’” which was absolutely as ridiculous as it sounds. Which, of course, got me hankerin’ for a batch of corn pudding! Of course, I knew I wanted to tinker a bit with the traditional version, and make it more savory, less sweet, but still easy to make. With one bite, my husband declared it the best corn pudding he ever had. He even asked for an extry serving!

What makes this corn pudding different?

Traditional corn pudding is a side dish popular in the South and the Midwest and is often served during the holidays. It’s also a dish that walks the line between savory and sweet, with a lot of added sugar to it. I think of it in the same category as the sweet potato casserole with toasted marshmallows on top. Sure, it’s served as a “side dish” to the main course, but honestly, it’s could almost function like a dessert.

My corn pudding recipe still has some residual sweetness from the use of the canned creamed corn (which has a little added sugar in it) as well as the natural sweetness from the corn itself. But it definitely falls in the savory side of the line with the addition of cooked chopped onion and fresh thyme in the mix. You can up the natural sweetness a little with the use of a sweet onion like Vidalia or Maui sweet onions if you wish. But I opted to just use a regular yellow onion.

How do I make this dish more tradition?

If you’re looking for a more traditional recipe, omit the chopped onion and fresh thyme, and add in 1/4 cup of white sugar to the pudding. Bake as directed.

Can I make this ahead?

Yes! This casserole is easy to make ahead of time. Just bake as directed and let it cool in the casserole dish. Refrigerate for up to 2 days, and then heat up the dish in a 350°F for 15 to 20 minutes or until warm.

Can I use fresh corn or frozen corn?

Yes. This recipe uses canned corn which is easy to find and cuts down on the prep. But if you have fresh corn or frozen corn, you can easily substitute for the canned corn.

For frozen corn, use 3 1/2 pounds of frozen corn. Take 1 1/2 cups of the frozen corn and put it in a blender or food processor and puree it. Use the corn puree with the whole kernels. Increase the flour to 4 tablespoons and add 1 tablespoons of white sugar to the mixture. There’s no need to defrost the corn kernels. Just use them frozen and increase the bake time to 40 to 45 minutes to accommodate the cold corn.

If you like this savory corn pudding recipe, try these other holiday side dish: 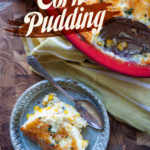 This savory take on the classic corn pudding casserole dish omits the added sugar and ups the savory flavor by adding in cooked onions and fresh thyme. But it still uses canned creamed and whole kernel corn so it comes together quickly! It’s the perfect side dish for a holiday meal or pretty much anytime of year. To naturally increase the sweetness without added sugar, try using a sweet onion like a Vidalia or Maui onion.
Calories 350kcal
Author Irvin

This blog currently has a partnership with Amazon.com in their affiliate program, which gives me a small percentage of sales if you buy a product through a link on my blog. I only recommend products (usually cookbooks, but sometimes ingredients or equipment) that I use and love, not for any compensation unless otherwise noted in the blog post. If you are uncomfortable with this, feel free to go directly to Amazon.com and search for the book or item of your choice.
61shares