This easy Shakshuka with feta recipe has a rich tomato based sauce dish with soft cooked eggs nestled in it, making it perfect for breakfast or brunch!

I’ll be the first to admit that I live in a food bubble. San Francisco is one of those food obsessed cities and I happen to also work in the world of food. Which means I often take for granted that everyone knows certain dishes, especially when it comes to breakfast and brunch. I make bacon and chives pancakes on a whim. I make sweet potato savory waffles just because. And vegetarian breakfast tacos are a staple here at home. So I took for granted that everyone knew what shakshuka was! It wasn’t until a friend of mine asked me one day what this “Shakira” dish was on a brunch menu that’s I realized not everyone deals with food like I do!

Shakshuka, sometimes spelled shakshouka, originated out of Tunisian and North African. It’s most often served for breakfast or brunch. However, because it’s so easy to make and has become so popular, you can find it on the menu all day in some restaurants.

The dish is a rich, spicy tomato-based stew with eggs cracked and cooked in it. It’s similar to the Italian dish Eggs in Purgatory, with a more Mediterranean spice slant, and less Italian. And though tomato-based versions of it are the most common, it’s a seasonal thing served in the summer and early fall. That said, I make my shakshuka with canned tomatoes, so I’m not reliant on fresh seasonal tomatoes and can have it all year round.

Shakshuka has become even more popular outside of north Africa into the Mediterranean area. Because tomatoes are fairly easy to grow in that region all year round, and eggs are an easy and cheap source of protein, shakshuka has become quite popular everywhere from Morocco to Israel. And restaurants by Chefs like Yotam Ottelenghi’s Nopi and Michael Solomon of Zahav have had versions of shakshuka on their menu at different restaurants of theirs for while.

How do you make Shakshuka with feta?

Shakshuka is a peasant food, often made for a large crowd or family and is super easy to make! Saute aromatics like chopped onions, garlic, red bell pepper, jalapeno, and chard stems. Add the tomatoes, and cook until the sauce has reduced and is thick. Add the chard leaves to wilt, then crack eggs in the dish and add the feta. Cover and cook!

How do you pronounce Shakshuka?

What do you serve with Shakshuka?

Traditionally Shakshuka is served communally in the pan and is a meal all by itself. But here are some of my favorite things to serve with it if you want to get a little more fancy:

At its core, shakshuka is a quick meal and made with just:

What’s in this version of shakshuka?

Because shakshuka traditionally is just tomatoes, peppers, onions and eggs, it’s a fairly blank slate for near infinite adaptations. My version has:

What else can you add to shakshuka?

The sky is the limit! Feel free to add your own riff on the dish. Some suggestions might be:

Can you make ahead?

Shakshuka tastes best right after you make it! And it comes together pretty fast.

But if you want to make the tomato sauce ahead of time you can totally do that. In fact, the spices in the sauce will intensify and become more complex overnight. Just make the tomato sauce (without the greens), let it cool and store it in the fridge. When you’re ready to make the dish, just warm it up in the pan until it’s hot, wilt the chard greens in the sauce, then crack the eggs in it and cook as directed.

Can you freeze it?

Again, you don’t want to freeze the final dish, because the cooked eggs don’t thaw out properly. But you can definitely freeze the tomato sauce ahead of time. Once thawed, the tomato sauce might be more watery, so you will want to cook the sauce longer to drive off the extra moisture. Then crack the eggs in it and cook as directed.

What pan should you use for shakshuka?

I don’t recommend using aluminum or plain cast iron skillets for shakshuka. The acidity of the tomatoes will etch into the metal and you’ll be serving up a tinny tasting dish.

Instead, pick a stainless steel, enamel coated, or non-stick pan. You can easily divide the dish into smaller pans if you want to serve them individually or make it in one big pan for a communal dish. I picked two medium dishes, perfect for two couples to share.

If you like this Shakshuka recipe, check out these other great egg recipes: 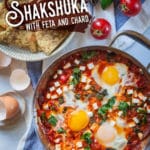 Shakshuka with Feta and Swiss Chard

This eggs in tomatoes dish is a quick and easy vegetarian meal that satisfies nearly everyone. I use canned tomatoes because they are available all year round. If you want to use fresh tomatoes, just chop them up and simmer them longer to break them down. Feel free to adjust the cooking time at the end to get your eggs more runny or more firm to your taste.
Course Breakfast, brunch
Cuisine American, Jewish, Mediterranean, tunisian
Keyword breakfast, brunch, egg, tomato
Prep Time 10 minutes
Cook Time 15 minutes
Servings 4
Calories 262kcal
Author Irvin

You can divide this recipe in half and make the dish in an 8 to 9-inch pan. Or make the entire recipe and split the ingredients into two 8 or 9 inch pans.

This blog currently has a partnership with Amazon.com in their affiliate program, which gives me a small percentage of sales if you buy a product through a link on my blog. I only recommend products (usually cookbooks, but sometimes ingredients or equipment) that I use and love, not for any compensation unless otherwise noted in the blog post. If you are uncomfortable with this, feel free to go directly to Amazon.com and search for the book or item of your choice.
146shares