Loaded mashed potatoes take the classic loaded baked potato and turns it into a casserole dish. The perfect holiday or big dinner side dish!

What are loaded mashed potatoes?

How do you make loaded mashed potatoes?

Making loaded mashed potatoes is easy. Boil chopped potatoes (with or without the skin, your preference) until the potatoes can easily be pierced with a fork. Then drain them and place the back in the still hot pot to dry out a bit.

Add butter, heavy cream, sour cream and mash to form a puree. Stir in cheddar cheese, bacon and green onions, then place in a casserole dish. Sprinkle the top with more cheddar cheese and bake until the cheese is melted.

Sprinkle the top of the casserole with more bacon and chopped green onions and serve!

What potatoes should I use?

I use Yukon gold potatoes which have a rich, almost buttery, flavor to them. They aren’t too waxy and aren’t too starchy. Plus the skin is thinner, which means I can scrub them clean, cut them up without peeling, and cook them without the skin being too distracting.

But any potato you would use for making mashed potatoes will work! The classic russet potatoes are great for this recipe as well. I would avoid a more waxy potato like red skinned potatoes. They tend to be a little too firm for proper mashed potatoes

Can you make this ahead of time?

Yes! Mashed potatoes are the ideal make ahead food, as they warm up great. Make the mashed potatoes ahead of time, without the toppings, and just store them in a covered container for up to three days in the refrigerator.

The day you are serving them, preheat the oven to 350°F. Stir in 1/4 cup of extra milk or cream to help loosen them up and spoon them into the baking dish. Cover with cheddar cheese and heat up for 30 minutes or until they are thoroughly warmed up and the cheese is melted. Then top with the bacon and green onions.

How do you store leftovers?

You can store leftovers in a covered container in the fridge for up to 3 days. Just reheat as directed above.

If you like these loaded mashed potatoes, check out these other potato recipes: 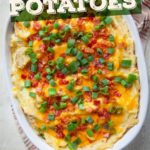 This mashed potato casserole dish is the ideal easy side dish for a crowd. Feel free to double the recipe and bake it in a larger casserole dish for a large group. I also like to crisp up the bacon again (a minute or two in a skillet on high heat) just to give extra crunch to the dish.
Servings 6
Calories 514kcal
Author Irvin

This recipe can be easily doubled.

This blog currently has a partnership with Amazon.com in their affiliate program, which gives me a small percentage of sales if you buy a product through a link on my blog. I only recommend products (usually cookbooks, but sometimes ingredients or equipment) that I use and love, not for any compensation unless otherwise noted in the blog post. If you are uncomfortable with this, feel free to go directly to Amazon.com and search for the book or item of your choice.
7shares