These Brown Butter Blondies are an easy-to-make chocolate chunk cookie bar that have an incredible depth of flavor from browning the butter beforehand!

I’ve long loved my friend Michelle’s blog Hummingbird High. I met her years ago in Portland, before she moved to San Francisco where we did not hang out together (I don’t know why that is, probably because we were both insanely busy), and then she left SF to move to New York and then when she moved back to Portland. In short, I knew her before she moved three times! And in that time I’ve watch her explode into the Rockstar that she is. Ever since she announced her cookbook Weeknight Baking (<-affiliate link), I’ve been anxiously awaiting it. And it Did. Not. Disappoint. I immediately wanted to make every single recipe but ended up making the Brown Butter Blondies because blondies and baked bars (like my apple pie bars, salted caramel bars, brookie bars, and hermit cookie bars) have totally become a holiday tradition.

In fact, as I was baking these intensely rich bars, my partner AJ crept into the kitchen and said “it smells like the holidays now!” because somehow chocolate chip cookies and brown butter just equate the holidays to him. I’m not disagreeing with him, but it does make me wonder if I should start making brown butter more often because it should NOT be limited to the holidays. It’s like the secret weapon of baking!

Which is why I adore how Michelle incorporated it into Weeknight Baking, which is exactly what it sounds like, uncomplicated baking that can be done after a hard day of working. I adore that concept as I have my own habit of making things OVERLY COMPLICATED just because I like to make my life difficult. But Michelle streamlines and simplifies and for anyone that is looking for accessible baking recipes…this book is for you! Go put it on your Christmas list, and if you don’t get it from Santa, be sure to buy it for yourself anyway.

What is a blondie?

Blondies are the “blond” equivalent to brownies where the cocoa is omitted and you add a health amount of vanilla! Basically, they are cookie bars, and can include additions like chocolate chips and nuts. Congo bars, which is what I make pretty much every year, are blondies! Don’t confuse blondies with white chocolate brownies though. That’s a delicious different creature, and I have a few versions of those on this blog as well, including a strawberry swirled white chocolate brownie and a white chocolate green tea brownie.

How do you make Brown Butter Blondies

First you make the brown butter on the stove by melting the butter and letting the milk fat turn golden brown. Then you place brown sugar, vanilla, salt, and a dash of nutmeg in the bowl of a stand mixer. Add the brown butter and mix until everything is incorporated and uniform. Add the eggs, one at a time, and then the flour. Stir in the chopped chocolate, sprinkle with some flaky sea salt and bake!

Though this recipe is pretty close to Michelle’s original recipe in the book, I did do some adaptations to it, including adding a little nutmeg (just enough to boost the nutty buttery-ness of the brown butter) as well as using a mix of chopped chocolate and a healthy sprinkle of the flaky salt. Michelle’s recipe is awesome as is though! You can find it in her book.

What is brown butter and how do you make it?

If you’ve never browned butter, it’s super easy! You basically just cook the butter on the stove, driving off all the water, and then cooking the milk fat so it turns golden brown. The main thing to remember when making brown butter is to watch it carefully, as it can go from golden brown to burnt super fast! Here are some tips on making brown butter if you have never done it before:

Why is there no baking soda or baking powder in the recipe?

Michelle omits leavening in this recipe which leads to a really dense and rich cookie bar. If you are looking for a blondie recipe that is slightly less dense, check out my congo bars recipe.

What chocolate is used in these blondies? What else can I use instead?

Michelle’s original recipe uses chopped white chocolate which caramelizes slightly in these bars. I opted to use a mix of white chocolate and dark chocolate in my version. But you can use whatever mix of chocolate you like, just as long as they total about 1 1/2 cups total! Here are some additions you can try to add to blondies to make them your own:

How do I store blondies?

Store the blondies in an airtight container or resealable Ziploc bag at room temperature for up to 3 days.

Can I freeze blondies?

Yes! You can totally freeze blondies. Just store them in an airtight container or a resealeable Ziploc freezer bag. The blondies will keep for up to three months.

Can I freeze the raw blondie dough?

The blondie dough is fairly fast to make but if you want to make it ahead of time and freeze it, you can. Just keep in mind the best way to freeze it is already pressed into a baking pan, so you need space in your freezer and a spare baking pan!

Place the entire baking pan in a giant 2-gallon freezer resealable bag and place it in the freezer. When you want to bake it, just take it out of the freezer and let it thaw on the counter as you preheat the oven. By the time the oven has come to temperature (about 10 to 15 minutes) the blondie dough will have partially thawed. Just bake your blondies a minute or two longer to accommodate the cold dough.

If you like these Brown Butter Blondies, check out some of these other brown butter treats! 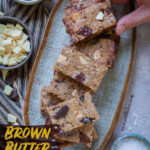 These blondies are like a vanilla brownie, dense and rich. The addition of brown butter gives them an extra layer of nutty goodness! Browning butter isn't difficult but you can check my section above on tips for browning butter if you've never done it before. You can you use whatever type of chocolate that you prefer, but keep in mind that white and milk chocolate are sweeter than dark chocolate so your blondie bars will be sweeter. See my section above on other mix-in options to use as additions to this recipe. The flaky sea salt that I use is optional but helps cut down on the sweetness of the blondie and I highly recommend it.
Course Dessert, Snack
Cuisine American
Keyword bars, blondies, chocolate, cookies, white chocolate
Prep Time 15 minutes
Cook Time 30 minutes
Servings 24
Calories 204kcal
Author Irvin

This blog currently has a partnership with Amazon.com in their affiliate program, which gives me a small percentage of sales if you buy a product through a link on my blog. I only recommend products (usually cookbooks, but sometimes ingredients or equipment) that I use and love, not for any compensation unless otherwise noted in the blog post. If you are uncomfortable with this, feel free to go directly to Amazon.com and search for the book or item of your choice.
52shares