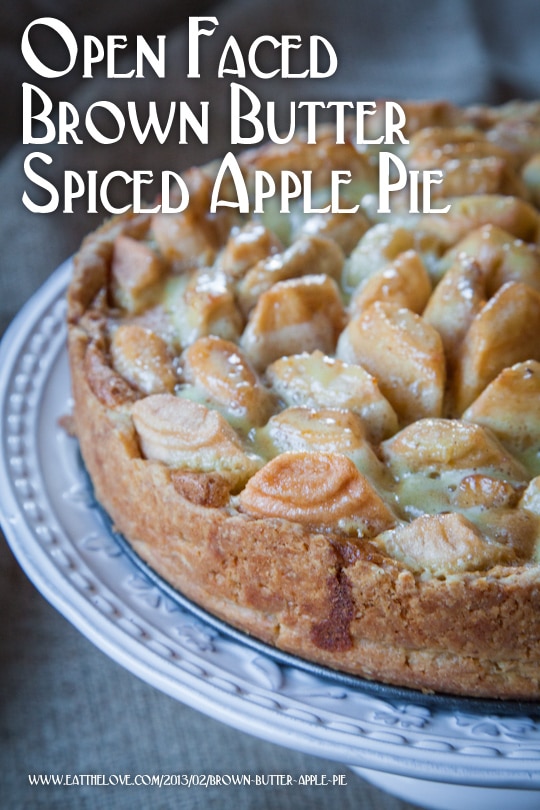 “I can’t believe you aren’t even going to watch the Super Bowl! We’re in it! It’s as if the city of San Francisco won the MacArthur Grant!” exclaimed my friend Peter as I tried to explain to him for the umpteenth time that I had NO interest in football. In truth, as a food blogger, I should have blogged about some sort of fabulous SF inspired Super Bowl food this past week. Local, heirloom bean dip or nachos made from artisan organic cheese and small-batch-made non-GMO corn tortilla chips, but instead I blogged about the easiest granola recipe ever and Yosemite National Park. And, true to form, I’m writing today about an open faced brown butter spiced apple pie, even though this pie probably should be posted in October or November when apples are most in season. I could wait nine months to post about this recipe but that’s not really how I work around here. 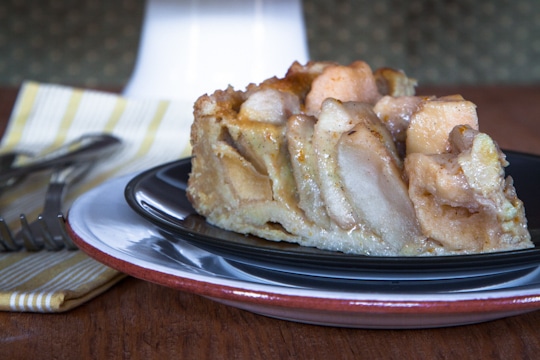 I’m not really a sports game watcher. I grew up in St. Louis in the 80s, which had a great baseball team, a good hockey team and a lousy football team which was sold to Arizona while I was in junior high school. St. Louis wouldn’t have another football team until I went to college, wherein we got the Rams, which was actually a decent team once they arrived in St. Louis but apparently were really lousy when they were in Los Angeles. Because of this, football to this day baffles me. 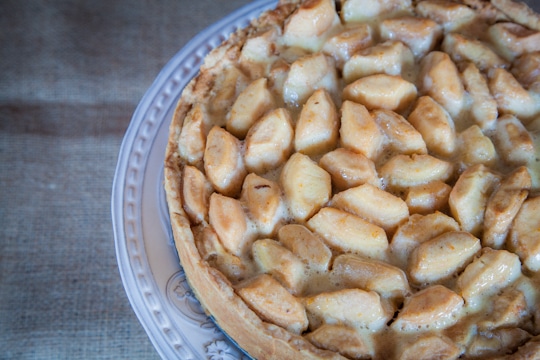 Which is all rather amusing to AJ who used to play football, and was quite good at it apparently. Of course, AJ doesn’t really like watching it so much, and he never really cared for playing it, even though he came from a family of football players (both his brothers went to school on football scholarships). Every time we watch a game (which admittedly is very rare) I constantly ask him a stream of questions. Why are they stopping now? What does that call mean? Why are they kicking the ball. I’m sure it’s very annoying but I can’t help it.

In the end, I spent Super Bowl Sunday happily working on a project of mine, as well as prepping for my trip to New York, for the Roger Smith Cookbook Conference. Apparently Baltimore won, which wasn’t who I would have wanted to win but I would be disingenuous if I said that I really felt one way or the other about it. But what I can say is that I really really love this apple pie. That’s a win-win situation for everyone. 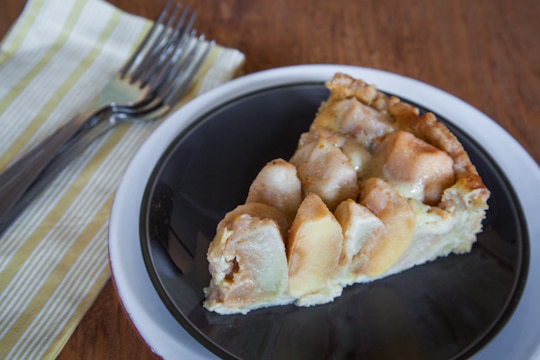 By Irvin Lin
This rustic pie is like a tart on steroids. Deep flavor and large apple slices make a dramatic presentation for any dinner party. The spices and brown butter really change the flavor profile of the pie and make it feel holiday but in truth you can serve it anytime you want. I certainly did, in mid January when I made it for my family. One thing to note, make sure to read the recipe thoroughly and take into account the time it will take for each step (the crust and apples need to baked separately before assembled and baked again). 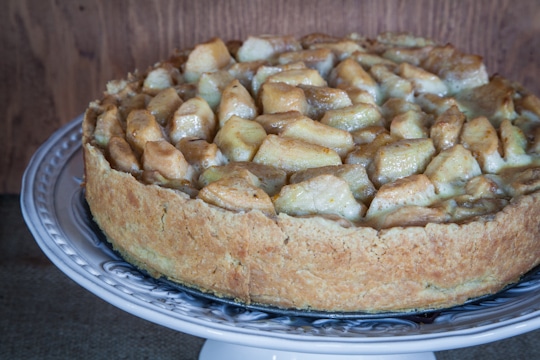 Directions
1. Make the crust by first placing the flours, sugar and salt in a large mixing bowl. Cut the salted butter into 1/2 inch cubes and sprinkle over the dry ingredients. Toss the butter cubes with your hands to coat, then squeeze the cubes of butter until they flatten out. Continue doing this until the rest of the butter has been reduced to smaller bits and flakes, squeezing and tossing the dry ingredients until the dough starts to resemble crumbly cornmeal with bits of butter still in flattened chunks. Add the egg yolks and sprinkle the rum over the ingredients and, using a large spatula, fold the wet ingredients into the dry. As the dry ingredients become more moist, work the ingredients together with your hands, until it comes together and forms a dough. If the dough seems too sticky, sprinkle a little flour into it. If the dough seems to dry, add a little more rum. The dough should seem soft however. Once formed, gather into a ball, flatten into a disk and wrap with plastic wrap. Refrigerate for 30 minutes.

2. Once the dough has chilled, roll it out into a 14 inch round circle but don’t worry if isn’t perfect. This dough is really forgiving. Fit the dough into a 10 inch springform pan with a removable bottom. Press the dough into the bottom and up the sides of the pan. If you can’t get all the dough into the pan at once, it’s ok to put it in pieces and patch the dough together (especially the sides – it’s pretty much impossible to not have to patch together the sides). Press the dough until it is all the way up to the top of the pan, all the way around and use any leftover dough to reinforce the seams at the edge of the bottom of the pan. Put the lined pan in the freezer for 15 minutes and preheat the oven to 400˚F. Once the oven is preheated, pull the pan out and bake in the oven for 10 minutes, until very lightly golden brown around the edges. The side dough should also contract and shorten, so don’t worry if that happens.

3. While the dough is chilling, peel, core and cut the apples into quarters. Place in a large bowl and sprinkle the lemon juice and melted butter over the apples and toss. Spray two large rimmed baking sheets with neutral flavored cooking oil and once the crust has baked, divide the apples and place them in a single layer on each pan. Sprinkle each with half the sugars and half the cinnamon each. Roast in the oven for 40 minutes, turning the apples and rotating the pans halfway through, until the apples are golden brown and fork tender. Let cool.

4. Once the apples and crust are cooked and cooled, arrange the apples in the crust, starting with a circle around the edge and working into the center, in concentric circles. Then make the filling by placing butter in a pan on the stove, along with the cloves, cinnamon sticks, cardamom pods, star anise. Split the vanilla bean lengthwise and scrape the seeds into the pan and add the vanilla pod as well. Add the nutmeg and orange zest. Turn the heat to medium and cook the butter, stirring frequently until it melts and starts to brown and turn fragrant. If you start to see the butter brown, turn the heat off and let the residual heat bring the butter to the right point. You don’t want to burn the butterfat, you just want it golden brown. Once this is done, discard the cloves, cinnamon, cardamom, star anise and vanilla pod.

5. Preheat the oven to 350˚F if it isn’t on, or turn the temperature down to it, and whisk the remaining filling ingredients together in a medium mixing bowl. Add the butter, scraping out the brown bits at the bottom into the bowl. Pour the filling over the apples into the crust. Bake in the oven for 60 to 70 minutes or until the apples are a rich golden brown and the egg mixture has set and looks puffy and slightly golden. Let cool on a rack for 30 minutes before releasing the pan side and serving on a platter.

This blog currently has a partnership with Amazon.com in their affiliate program, which gives me a small percentage of sales if you buy a product through a link on my blog. I only recommend products (usually cookbooks, but sometimes ingredients or equipment) that I use and love, not for any compensation unless otherwise noted in the blog post. If you are uncomfortable with this, feel free to go directly to Amazon.com and search for the book or item of your choice.
5690shares