Ahh… The Daring Bakers’ Challenge. Once a month a bunch of bakers set out to make a dessert, theoretically all the same, but vastly wildly different in real life. This challenge was pretty unique, as it was fairly open ended in terms of what we could do with it AND there was a prize involved! How does that work? Well all you had to do was submit a photo of your Daring Bakers’ Challenge before midnight East Coast time (9pm here in California) April 26th and you were entered. So what did that mean for me? It meant I was baking up until 8:30pm and frantically trying to get AJ to take some photos. Nothing like a race to the last minute eh? I hit the “Post Reply” button the Daring Bakers’ Challenge forum at 8:54pm. Six minutes to spare people. SIX. MINUTES. The April 2011 Daring Bakers’ challenge was hosted by Evelyne of the blog Cheap Ethnic Eatz. Evelyne chose to challenge everyone to make a maple mousse in an edible container. Prizes are being awarded to the most creative edible container and filling, so vote on your favorite from April 27th to May 27th at http://thedaringkitchen.com. My entry? A Star Anise infused Maple Mousse in a Blueberry and Lemon Tuile Cup topped with White Chocolate Whipped Cream. 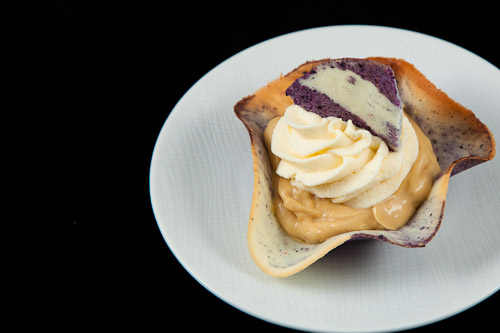 You would think that I would get my act together and maybe come up with something ahead of time, but I like to live on the edge. Also, as I was telling my friend Tea over at Tea & Cookies, I seem to be inordinately busy with absolutely no spare time. And yet, I am still broke. How is that? Oh well, at least I still eat like a rich person (and I have the waistline to prove it)! 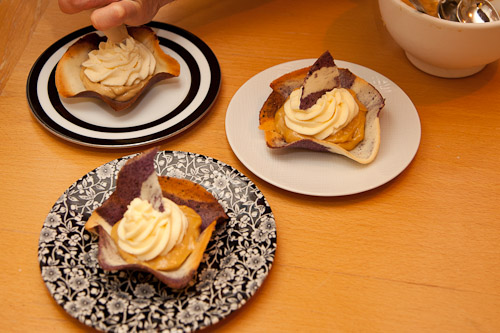 But enough about my woes. Let’s talk about this Daring Bakers’ Challenge. I love a good challenge. “Requirements” included making the maple flavored mousse and an “edible container” to put the mousse in. You should see some of the awesome stuff that the people came up with! Gorgeous. But for mine, I decided to make a tuile cup. I’ve actually never made a tuile before, much less a tuile cup, and let me tell you, it was super fun to make but you gotta have asbestos hands for those suckers! I was pretty happy with the way the tuiles came out. You can’t really see, from the beauty shot, but the cups are pretty darn nifty looking. The blueberry and the lemon work so well in the tuile, and the star anise maple mousse and white chocolate whipped cream all play well together, like a bunch of happy-go-lucky kids in a playground. 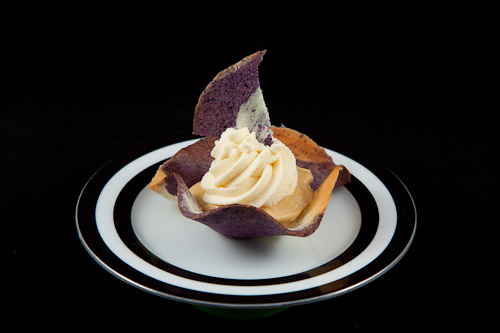 Of course, making the tuile cups didn’t quite work out as perfectly as I thought they would. So I just took some of the “unsuccessful” ones and used them as a decorative topping on the whipped cream. Go me! I’m all about turning a fail into a win (and despite what it seems on this blog, I have a lot of fails). 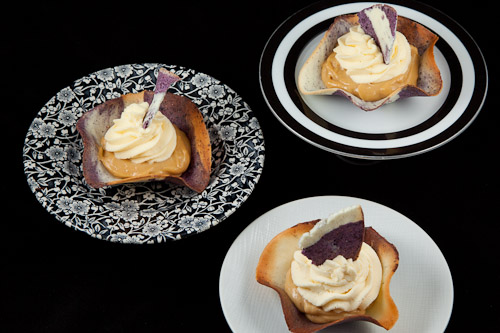 So I’m going to kick back and relax a little bit with this here challenge. The maple mousse is a bit sweet, but sometimes you need a little sugar rush when you’re trying to beat a deadline right? 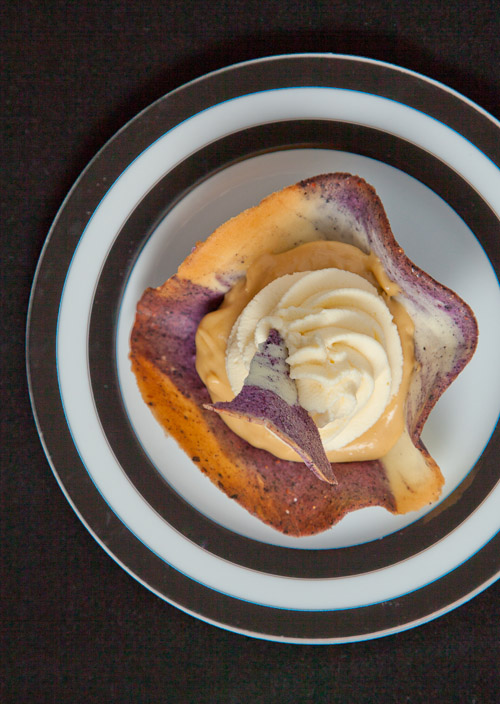 Star Anise infused Maple Mousse in a Blueberry and Lemon Tuile Cup topped with White Chocolate Whipped Cream
This maple mousse is pretty sweet by itself, but the punchy blueberry and lemon flavors in the tuile cup really temper the that and the whipped cream really helps tie it all together. The mousse calls for Grade B maple syrup which can be found at specialty stores like Trader Joe’s. It’s has a deeper maple flavor than regular maple syrup. Don’t even try to use generic pancake syrup, you need real pure maple syrup for this recipe.

The tuile calls for freeze dried blueberries which can also be found at specialty stores like Trader Joe’s. The tuile use something called stencil paste. It’s a batter that is spread over a stencil and then baked until crisp. The stencil is easy, you can just cut out a circle (or any other shape) from a piece of thin cardboard (like the cardboard from a cereal box or cake box of instance) but I just used a piece of food grade acetate, because I’m fancy that way. However you’ll most likely want to use an offset spatula to spread the batter, as a regular knife will make it much more difficult (but not impossible). Offset spatulas are wonderful in the baking kitchen, and I highly recommend getting at least one for spreading batter, icing and frosting. You won’t regret the $5 investment.

1. Measure 1/4 cup of the heavy whipping cream in a small metal bowl that snugly fits over a pan with a little water in it. Make sure the water is not touching the metal bowl. Sprinkle the powdered gelatin over the cream, to let it soften (don’t turn on the stove just yet).

2. Place the maple syrup and the star anise in a medium pan on the stovetop. Bring to a hard boil and then lower the heat and simmer for five minutes. Then turn off the heat, but leave the star anise in there.

4. Turn the heat on the pan with metal bowl that has the cream in it. Bring the water to a simmer and then stir the cream until the gelatin has dissolved.

5. Pour the cream into the medium pan with the maple syrup and whisk to combine.

6. Remove the star anise and let the maple syrup cool to room temperature, whisking the maple syrup occasionally, until it reaches the consistency of unbeaten raw egg white (this could take anywhere from 15 minutes to an hour).

8. In the meanwhile, preheat an oven to 300˚F and line a baking sheet with a silpat or parchment paper.

9. Place the butter in the bowl of a standing mixer fitted with the paddle attachment. Cream the butter by mixing on medium until the butter looks creamy. Add the sugar and beat until incorporated.

10. Add the egg whites and beat on medium high until mostly incorporated. This will take awhile and you might want to scrape down the sides of the batter occasionally. The butter chunks will probably get smaller and smaller but won’t entirely disappear. Don’t worry about that.

11. Sift the cake flour into the batter and then beat on medium until the incorporated into the batter. You shouldn’t see any butter chunks at all. Remove 1/2 of the batter to a bowl and then add the lemon extract, stirring with a fork or spatula to incorporate completely.

12. Take the freeze dried blueberries and crush them with a mortar and pestle until you have powder. If you don’t have a mortar and pestle, place them in a ziplock bag and use a rolling pin to crush them to powder. Add the blueberry powder to the plain batter in the standing mixer bowl. Turn the mixer to medium and beat until the blueberry powder is incorporated and the batter is a uniform indigo.

13. Take the lined baking sheet and place the stencil on top (I used a 4 1/2 inch circle for my stencil but you can use a different shape if you want – just make sure it’s large enough to turn into a bowl). Using your offset spatula, smear a bit of blueberry batter on on side of the stencil, and then the other side. Then wipe the spatula off and smear some lemon batter in the middle. Then use the spatula to smooth out the batter so the stencil is completely covered. Lift the stencil directly up, and then repeat until the baking sheet is filled with batter (I was able to fit three tuiles onto a standard baking sheet, but you might be able to fit more if you are more nimble or your stencil is smaller or different shaped) 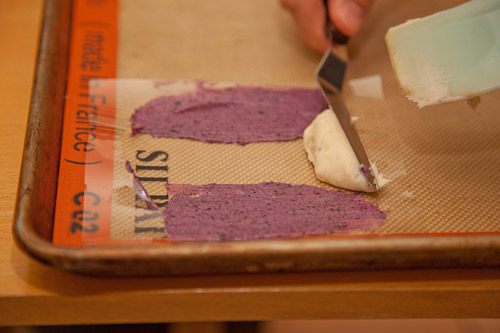 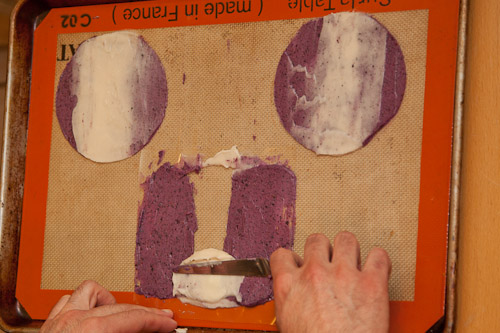 14. Bake for 9 to 13 minutes (depending on how thick you smear the batter) until the edges of the tuiles start to darken and brown. Place an upside cup or whatever mold you are using on a stable flat surface. Then remove one tuile with a spatula (leaving the other tuiles on the baking sheet, in the hot oven) and quickly flip it onto the cup or mold. Using your hands (try not to burn yourself) mold the tuile into a cup shape. Repeat with the remaining tuiles and then let cool to room temperature. They will harden as they cool. If the tuiles are still soft, stick them back in the oven for a couple of minutes to crisp up. 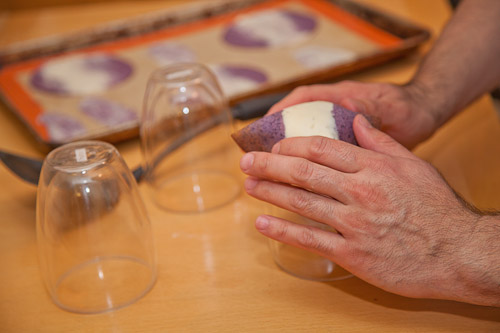 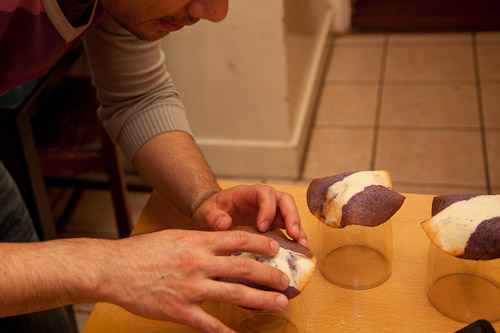 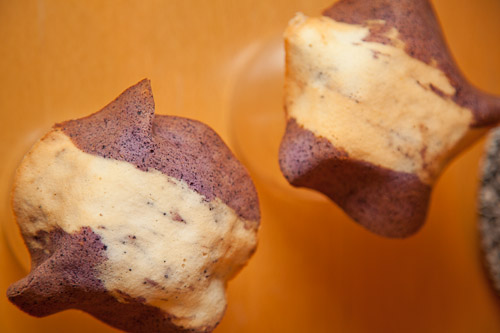 17. Assemble the dessert by taking the tuile cup and placing a 1/3 cup of maple mousse in it and then piping or spoon some whipped cream on top. If you messed up any tuile cups (and chances are you did) tear part of it off and stick it on top of the whipped cream decoratively. Enjoy!