In a fit of anxiety that I wouldn’t have anything to blog about (apparently that’s not an issue as I seem to have a backlog of posts that I’m trying to catch up on) I joined the Daring Kitchen group Daring Baker’s Challenge. For those not in the know, they challenge everyone in the group to bake the same thing and then post simultaneously the results of the baking on the 27th of the month. The April 2010 Daring Bakers’ challenge was hosted by Esther of The Lilac Kitchen. She challenged everyone to make a traditional British pudding using, if possible, a very traditional British ingredient: suet. 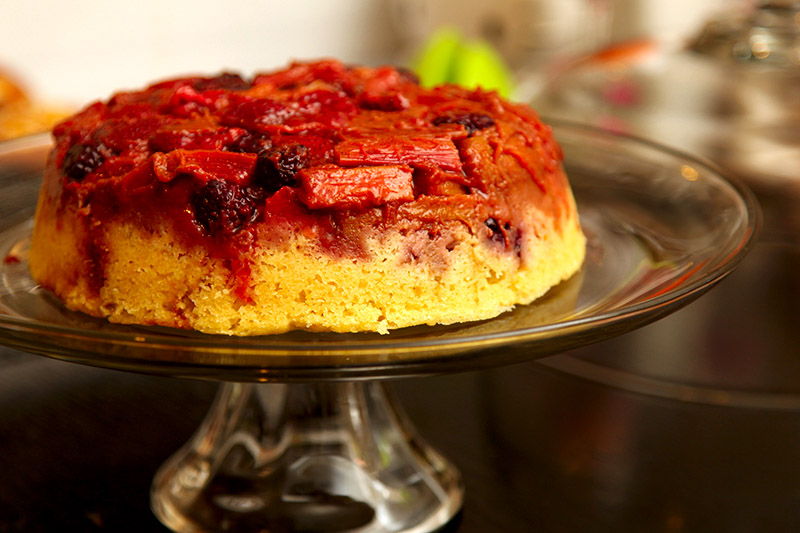 I’m not squeamish about food ingredients. In fact, I’m not squeamish about nearly ANYTHING when it comes to food of any sort (hello, I’m Asian and have eaten pretty much anything and any part of most commonly eaten animals). However, I really didn’t want to go down the route of tracking down and processing suet. Suet, if you are unfamiliar with the ingredient, is hard beef or mutton fat found around the loins and kidneys. It’s a traditional ingredient in making British steamed pudding. Steamed puddings like the much maligned “Spotted Dick” dessert and the traditional kidney and onion pudding. My friend Peter would probably love this challenge, as he loves pretty much anything related to meat or animal parts (which leads to all sorts of interesting conversations when I am around him and his partner Grant who is a vegetarian).

However, I was so NOT enthusiastic about this challenge. I don’t know why, as usually I love to play with ingredients that I’m not that familiar with. But the idea of tracking down suet (which, in a food town like San Francisco, probably wouldn’t be that hard) and then grating it and rendering it down just seemed like a lot of work for a dish that never really appealed to me in the first place.

I love the British. I love the fact that they gave us French and Saunders and AbFab and Anthony Steward Head (Giles from Buffy!) and The Beatles and Kate Bush and Kylie Minogue (ok, I know she’s Australian, but she moved from Australia to England to launch her music career, so I’m gonna count her in this list). They gave us James Bond and The Spice Girls and William Shakespeare! They gave us The Sex Pistols and punk rock and Princess Di. And yes, they gave us Sir Alec Guinness – Obi-Wan Kenobi. For that AJ will be forever grateful.

I love the guard at Westminster Abbey who adored us when we visited (he asked where we were visiting from, and when we replied “San Francisco”, gave us a lascivious wink and said “Luv your city!” as he held open the door for us).

I love the fact that when I was in London with AJ, we actually were stopped at the entryway of the dance club G.A.Y. and grilled on whether or not we understood what sort of club we were going to, and if we were ok with that. Um. Yeah. The club is called G.A.Y. We know what sort of club is it. Not ALL Americans are ridiculously stupid. 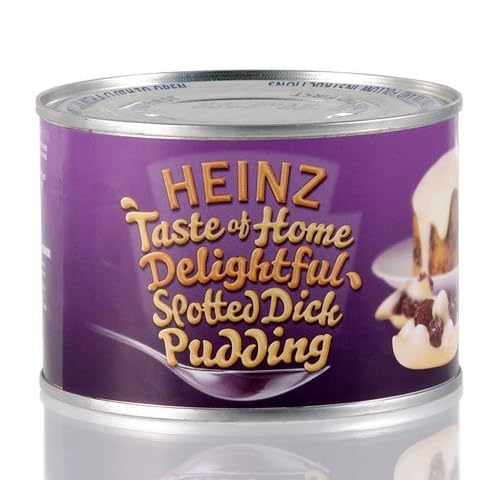 Now don’t get me wrong. I love me some chicken tikka marsala and I love fish and chips (both of which we ate tons of when we were in London). But for the first challenge in the Daring Kitchen Daring Baker’s Challenge was definitely something I wasn’t enthusiastic about.

So I put off making the dish until this past weekend. And when I finally tried to track down suet, the people I talked to said they needed a two week lead time to get it. Ah my laziness….

Going back to the original post about the recipe I read a little deeper. Esther generously supplied MANY variations of the recipe, including some vegetarian version and some that used butter or shortening. In fact, she encouraged people to make their own version of the steamed pudding. 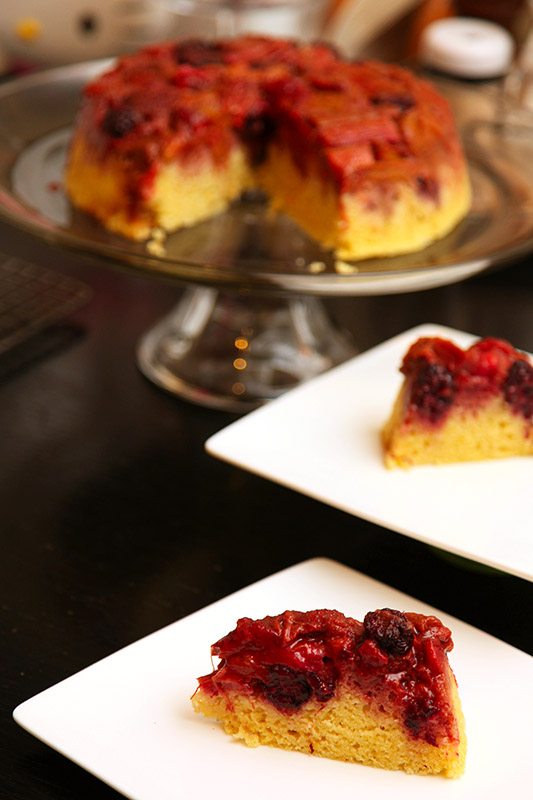 Yay! So I took a BBC recipe for a sweet rhubarb steamed pudding recipe and adapted it California style. Fresh seasonal fruit (well, okay the blackberries aren’t quite in season yet, but I couldn’t resist as they looked really good at the store – plus I wanted a fruit that had some natural pectin in it to help gel the topping) created what sounded like a heavy winter dessert into a lighter spring/early summer dessert. And thus, my very first Daring Baker’s challenge was complete. Not bad for a first time. And next time I’m tracking down some suet and making me some “spotted dick”. No, actually I probably won’t. Because, as a gay man, I really don’t want anything to do with a substance called “spotted dick”.
Whilst baking, I listened to Beth Orton’s Trailer Park. Soothing and timeless.
The Daring Baker’s Rhubarb and Berry Steamed Pudding
altered beyond recognition from the BBC Good Food Rhubarb Steamed Pudding recipe.
fruit topping
2 1/2 cups rhubarb cut into 1 1/2″ length
1/4 cup brown sugar
2 Tbls honey
2 tsps ground ginger
1/2 tsp cardamom
1/2 tsp cinnamon
zest of 1 medium meyer lemon
1 Tbls meyer lemon juice
3/4 cups blackberries
3/4 cups strawberries hulled and sliced into 1/4″ thick slices
cake sponge
1/2 cup plus 2 Tbls ultrafine sugar
1 tsp vanilla
9 Tbls butter
2 medium eggs
2 tsp baking powder
1/2 tsp salt
1 1/4 all purpose flour
zest of one meyer lemon
1. Combine the first 8 fruit topping ingredients together in a large pan or skillet (everything but the black berries and strawberries). Cook for over medium-low heat until the rhubarb starts to soften (about 2 to 3 minutes). Turn off the heat and stir in the berries while still hot and set aside.
2. Cream the butter, sugar and meyer lemon zest in a mixing bowl. Add the eggs one at at time, mixing and scraping down the sides of the bowl with a spatula between each egg. Add the vanilla and mix and scrape as well.
3. Sift the flour, salt and baking powder onto the creamed butter mixture. Then using a large spatula, and carefully fold the flour into the butter mixture.
4. Grease a 4 cup pudding basin. Spoon the rhubarb berry mixture into the bottom of it, and then spoon the cake sponge on top of that evenly, making sure the cake batter covers all of the berry mixture.
5. Grease one side of some wax paper or parchment paper and put it over the basin, wrapping it around the top and onto the sides. Then place a piece of aluminum foil over the parchment paper and seal the basin as best you can. Wrap a piece of cooking string around the rim of the basin/casserole dish to secure the foil and paper.
6. Optionally you can also loop a long piece of string around the top and bottom criss-crossing over and tying it together so you have room to slip your hand underneath to pick up the basin once it’s done steaming. Basically I just created a handle to lift the basin up because my stock pot I was using was really large and tall and it would be hard to other get it out of the pot.
7. Put the basin in a stock pot with an expandable steamer basket on the bottom so the basin doesn’t touch the bottom. Pour water into the stock pot until it goes up the basin/casserole dish half way up.
8. Cook the pudding in simmer water for 1 1/2 hours, checking periodically that you don’t run out of water. If you do, add more.
9. Remove and invert onto a serving platter. Serve warm with lightly sweetened whipped cream or all on it’s own.
Note 1. I have a fairly well stocked kitchen, but I found that I had to MacGyver not ONE but TWO different things in making this recipe. First I didn’t have a pudding basin…thus I found a round casserole dish that worked. Second I seemed to have misplaced BOTH of my steaming baskets. So I took some aluminum foil rolled it into a long cylinder and wrapped it into a circle (I referred to it as my aluminum foil snake) to rest my casserole dish on so it wouldn’t touch the bottom of the stock pot.
Oh yeah, and I had to use my big stock pot, because none of the other stock pots I had would fit the casserole dish with it’s handles. I only really pull out this specific stock pot when I’m making turkey stock from my Thanksgiving turkey carcass. It’s a bit unwieldy due to it’s large size. I can’t wash it in my kitchen sink as it won’t fit. I wash it in my bathtub. How’s that for sad and ghetto?
Note 2. I realized after I made this, that basically I was making a cobbler, but steaming it instead of baking it. After I inverted it, AJ observed that it was basically an upside down cake. So there you go. I really did take a completely British dessert and make it American. I guess that’s what us American’s do. We bastardize anything the Europeans do and make them our own.

This blog currently has a partnership with Amazon.com in their affiliate program, which gives me a small percentage of sales if you buy a product through a link on my blog. I only recommend products (usually cookbooks, but sometimes ingredients or equipment) that I use and love, not for any compensation unless otherwise noted in the blog post. If you are uncomfortable with this, feel free to go directly to Amazon.com and search for the book or item of your choice.
42shares