You are here: Home / cake / Pear Cake with Honey, Walnuts and Blue Cheese

If you’re looking for a sophisticated dinner party dessert, check out this gorgeous upside-down pear cake made with honey, walnuts and optional blue cheese! (Jump directly to the recipe.) 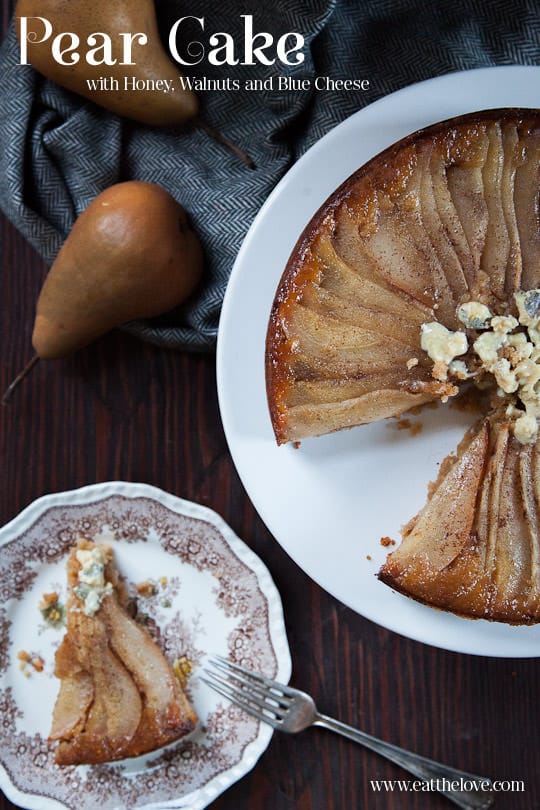 The winter months can be a bit hard for someone who loves fruit as much as I do. With spring just around the corner and early strawberries starting to appear at the market I get excited about what the warmer weather is going to produce. But winter isn’t a complete fruit wasteland, with it’s plentiful bounty of citrus, apples and pears. In fact, lately I feel like I’ve rediscovered the pear, a fruit that I think tends to be overlooked both in pastries and just eating out of hand. It was this in mind that I decided to make a pear cake with honey, walnuts and blue cheese. 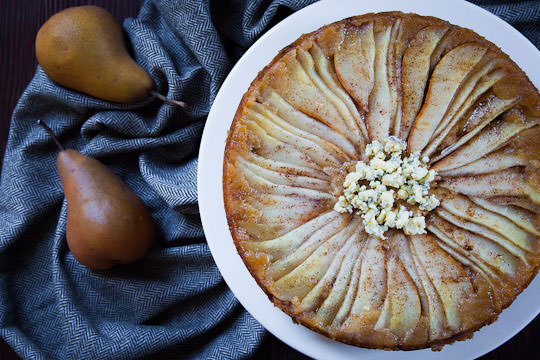 The pear is a persnickety (pearsnickety? Have I made that joke before? Probably. I’m rather predictable that way.) fruit. Picked off the tree before it is ripe, you have to let it sit on the counter a few days to ripen up and soften before you use it. Let it sit too long and it goes bad. Not long enough, you have a rock hard fruit that’s fairly tasteless. But if you find that sweet spot, which isn’t hard (a simple push with your thumb near the top stem will show if it’s ready – if it gives a little you have a properly ripened pear) to do, you have a wonderful fruit ready for eating or cooking with. 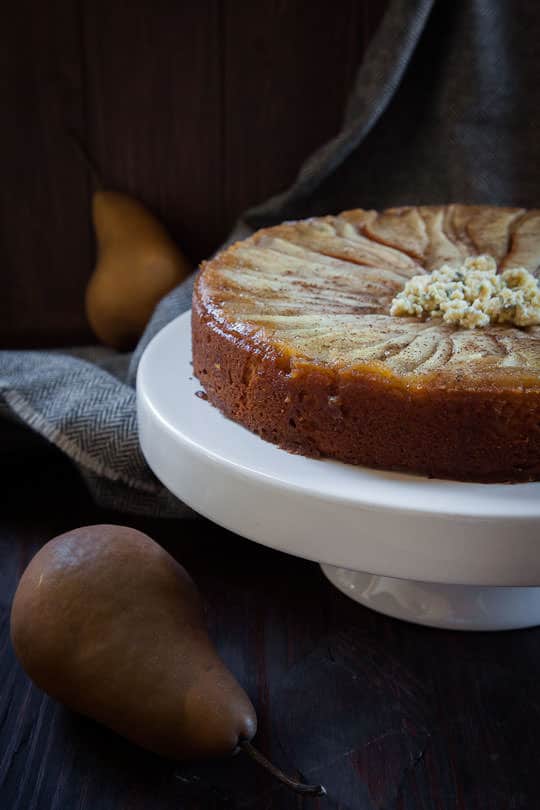 I’m partial to baking and cooking with the Bosc pears, which tend to hold their shape when you bake them. Their long narrow neck look rather elegant, as if they were a fair complexioned upstairs woman in Downton Abbey or some other PBS/BBC show that I don’t really watch (I may be gay but I’m not that much of a cliché*). Because Bosc pears tend to be firm and crisp even when ripe, slicing them is easy and their flavor is a little more sturdy enough to add a little bit of spice like nutmeg and cardamom or a nut like walnuts without overwhelming the fruit. The best part of the cake, it’s every bit as sophisticated as serving a cheese platter with a drizzle of honey, walnuts and slices of pear but it’s all rolled up into a single cake form. Because, you know, cake makes everything better. 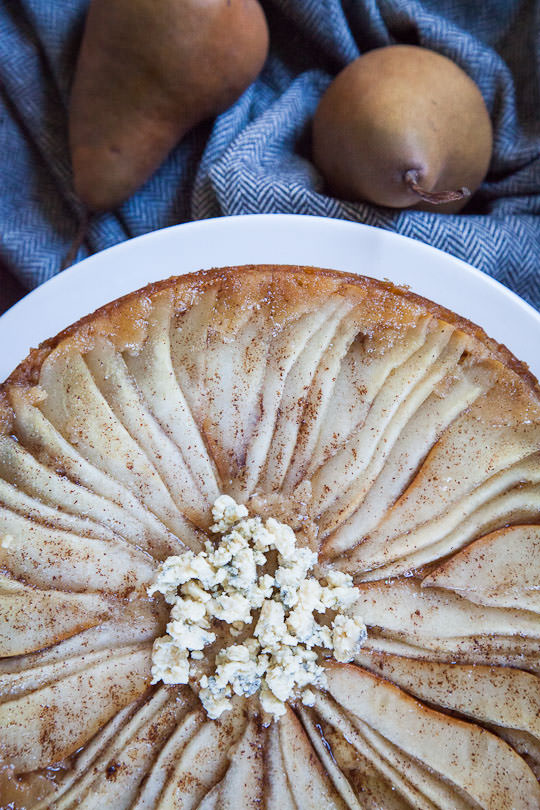 (*I lie. I’ve actually watched the first season of Downton Abbey. I quite enjoyed it but AJ thought it was rather dull (he’s more of a secret agent spy genre type of guy) so we haven’t watched the subsequent seasons. Don’t worry though I’m still plenty gay. I’m listening to Kylie Minogue’s latest single in anticipation of her new album as I write this.)

Special thanks to Kerrygold for sending me samples of their Cashel Blue Farmhouse Cheese to enjoy and to Running Press for sending me a review copy of Wintersweet by Donroe Inman. Even though I got complimentary samples of the cheese and the cookbook I was not compensated for this post and all opinions are my own. 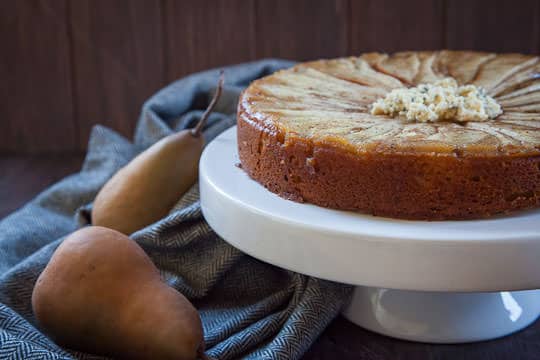 This cake is one of those elegant dinner party cakes that is surprising easy to make. The combination of pear, honey and walnuts is a classic one, but blue cheese is pretty polarizing. Some people love it, while others will find it rather offensive, especially in a dessert. I used Kerrygold’s Cashel Blue Farmhouse Cheese but feel free to pick a blue cheese of your choice. Or serve it without (or on the side) for those who aren’t a fan.

Drastically adapted from Wintersweet by Donroe Inman, a beautiful cookbook about baking in the cold snowy winter months. 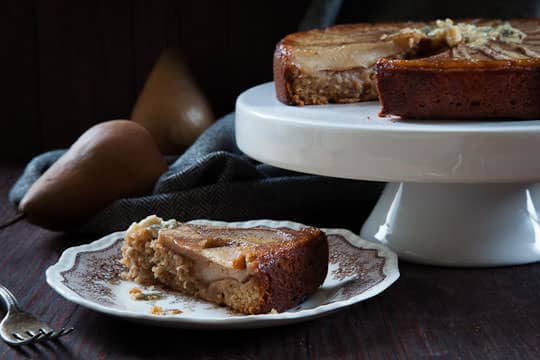 Directions
1. Preheat the oven to 325˚F. Spray a 10-inch springform pan with cooking spray. Line the bottom of the pan with a parchment round and place the pan on a rimmed baking sheet or pizza pan.

2. Quarter the pear and cut out the center seeds, leaving the skin on (or peel the pear first if you don’t want the skin but I sort of liked the rustic look it gave the cake). Slice each pear quarter into 1/4 to 1/2-inch slices. 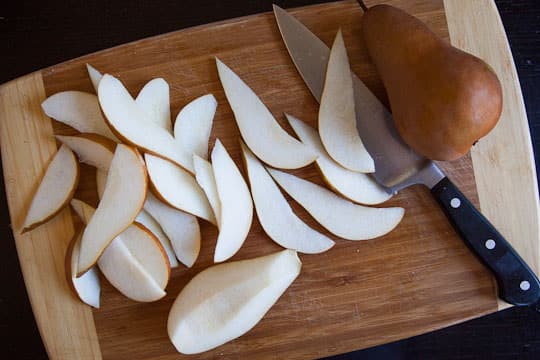 3. Heat the butter in a small pan on medium heat stirring with a heatproof spatula, until the butter fat solids start to brown a bit and smell nutty fragrant. Turn the heat off and add the honey, stirring until the honey starts to thin and loosen up into the butter. Scrape the butter, honey and brown bits into the prepared pan. Fan the pear slices around the pan, with the bottom large end of the pear facing out and the skinny neck end of the pear slice pointing in. Keep the smaller slices to use in the center or to tuck between any gaps in the pear layer. 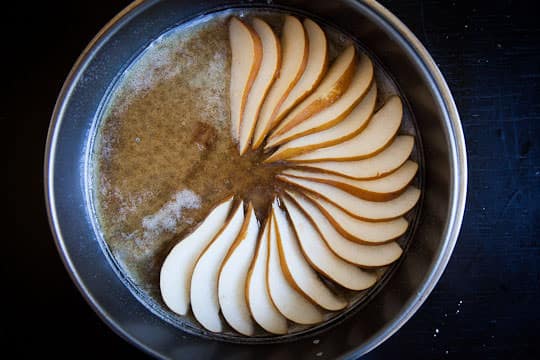 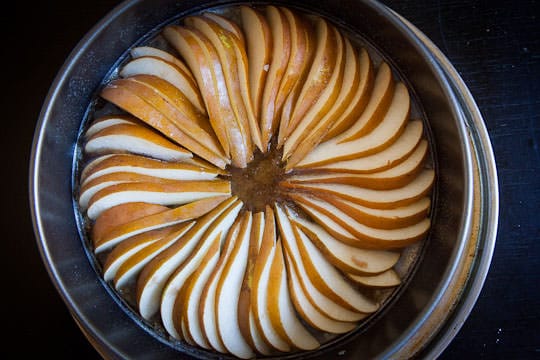 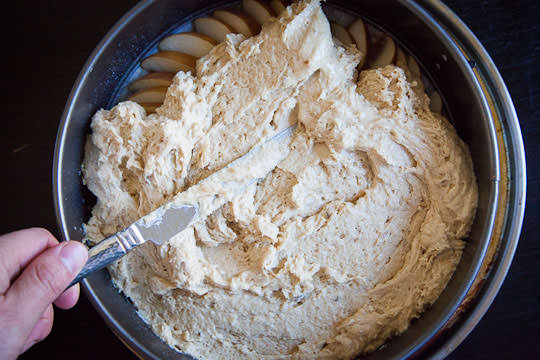 5. Place in the oven and bake for 40 minutes, or until a toothpick inserted in the center of the cake comes out clean. Let cool in the pan on a wire rack for 20-30 minutes before releasing the sides of the pan from the bottom (still warm, but cool enough to handle). Invert the cake onto a serving plate or cake stand and remove the bottom (as well as the parchment paper). Sprinkle crumbled blue cheese in the center of the cake while warm (if using) or serve the cake with the blue cheese on the side if some people are averse to stinky cheese with dessert. 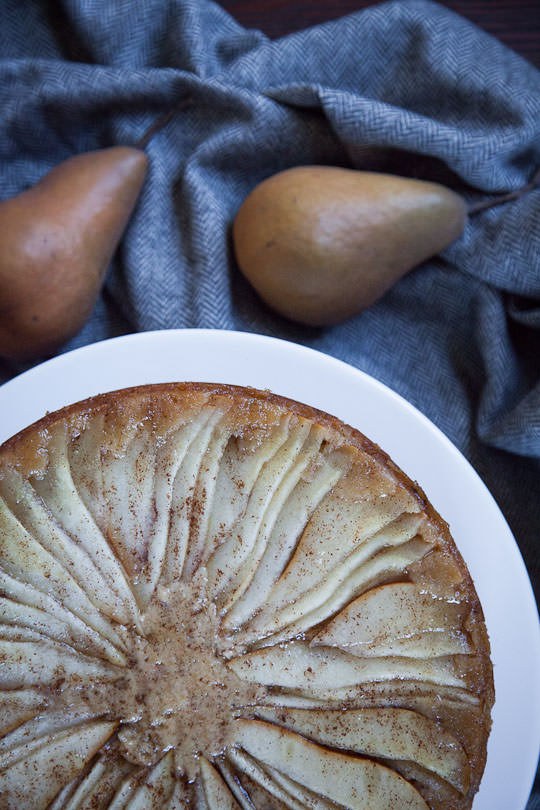 This blog currently has a partnership with Amazon.com in their affiliate program, which gives me a small percentage of sales if you buy a product through a link on my blog. I only recommend products (usually cookbooks, but sometimes ingredients or equipment) that I use and love, not for any compensation unless otherwise noted in the blog post. If you are uncomfortable with this, feel free to go directly to Amazon.com and search for the book or item of your choice.
529shares