This sophisticated version of pineapple upside down cake uses fresh grilled pineapple, along with a lime scented cake and a sprinkling of spicy pepper to take it all to the next level! (Jump directly to the recipe.) 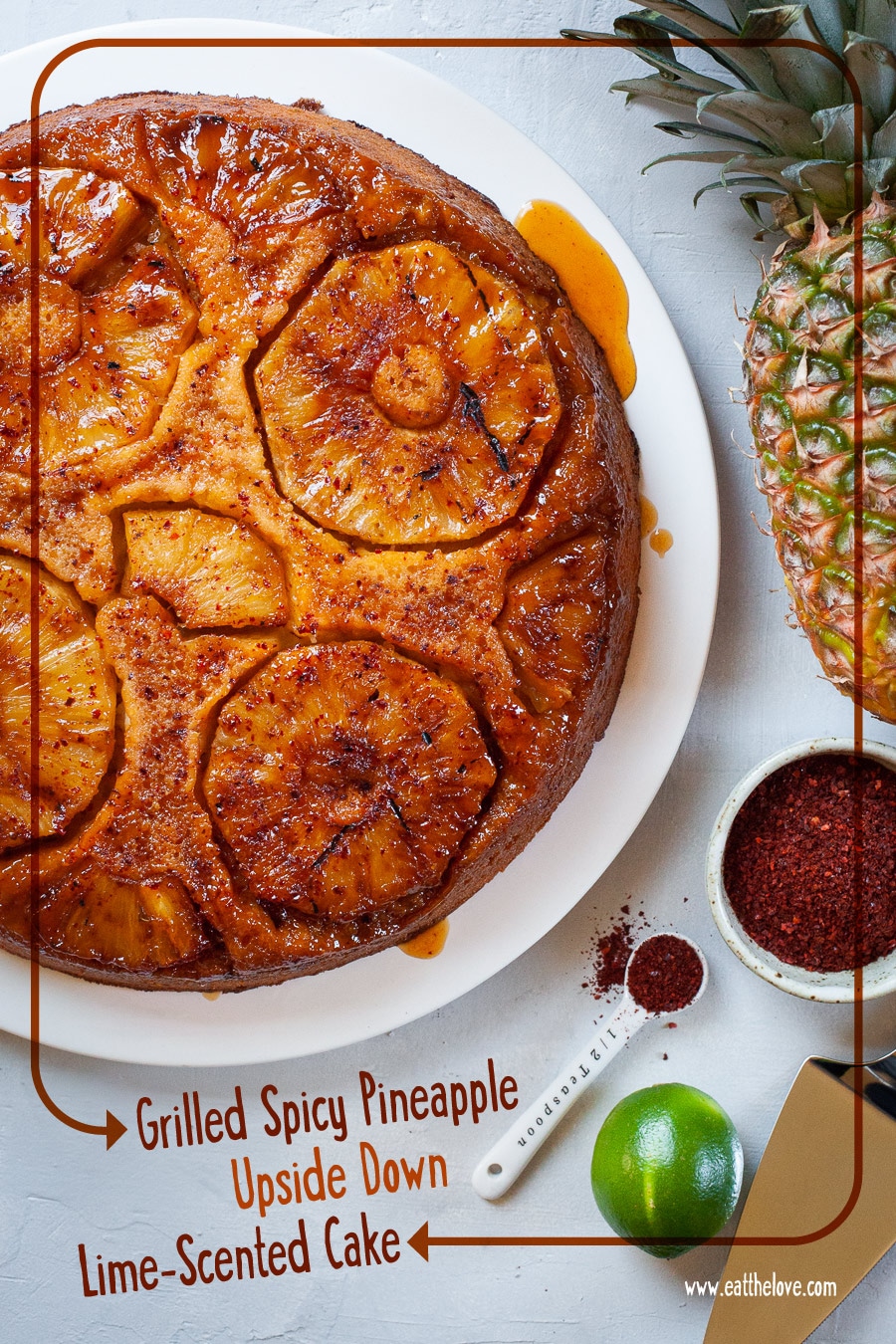 San Francisco has been gray and dreary for the past couple of weeks at the end of May, though the sun is finally coming out now that it’s hit June. In Los Angeles, they have a phrase for this weather: May Gray (which is followed by June Gloom). But there have been little peaks of sun here and there. Promises of summer around the corner, to accompany all the brilliant fruit and vegetables bounty that are showing up at the grocery store. It’s easy to eat “seasonal and local” here in San Francisco year-round, but in the summertime it’s easy to eat that way everywhere. 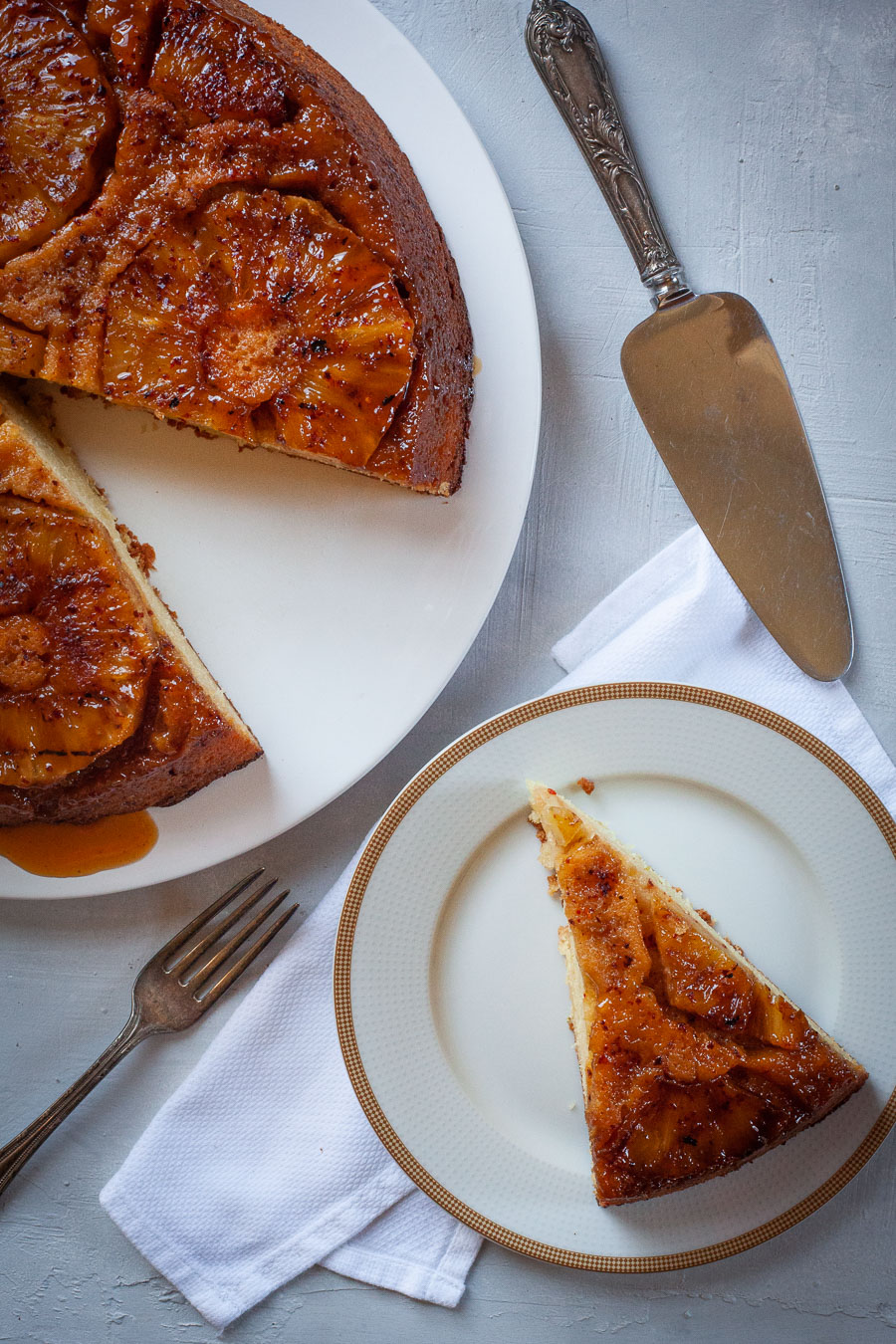 Of course, while the city by the bay is covered in gray clouds, I suddenly found myself suddenly pining for the sun and beach of Hawaii. AJ and I had made a sort of/kind of spontaneous trip there (well, to be honest, we bought the airplane tickets spontaneously on a whim as we found round trip for $350 in October when there was a flash sale). It had been years since we had stepped foot on the island. Though we had high expectations, it lived up to our memory of the tropical paradise, with the natural beauty of the beach, the gorgeous hiking and the amazing food. 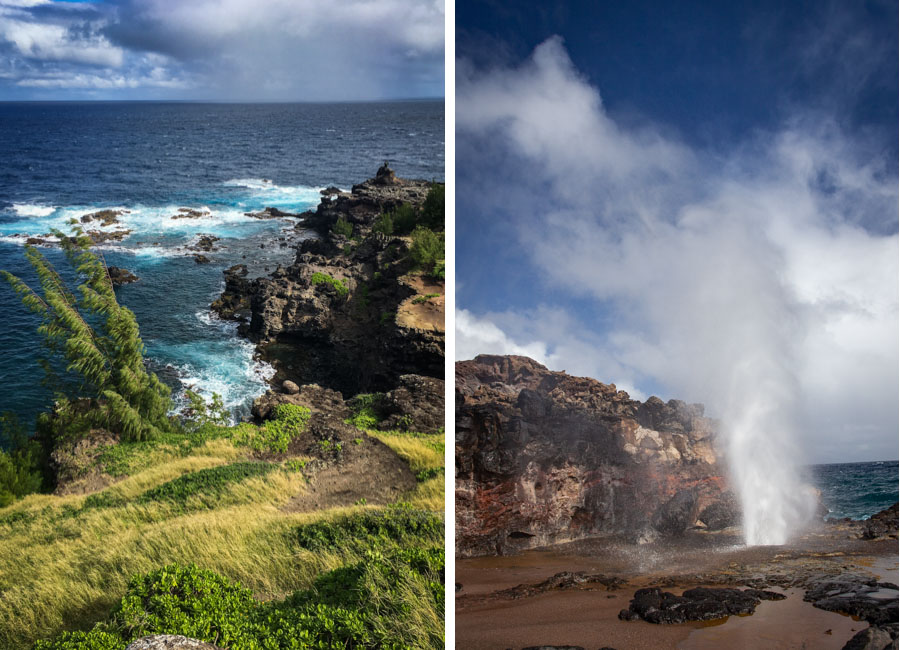 If you follow this blog, you probably remember our stay at the Fairmont in Hawaii as well as the recipe that I posted for a Korean-inspired fried calamari. But AJ and I did more than just lounge about the beach and eat tons of amazing food. We drove up to Halakeala to see the sunrise (something everyone should do, as it is utterly magical and there’s no way that a camera can actually capture it properly), hiked the southern part of Halakeala National Park through a bamboo forest up to a waterfall, and drove around West Maui, a part of the island that we really don’t know very well (and really need to explore more). 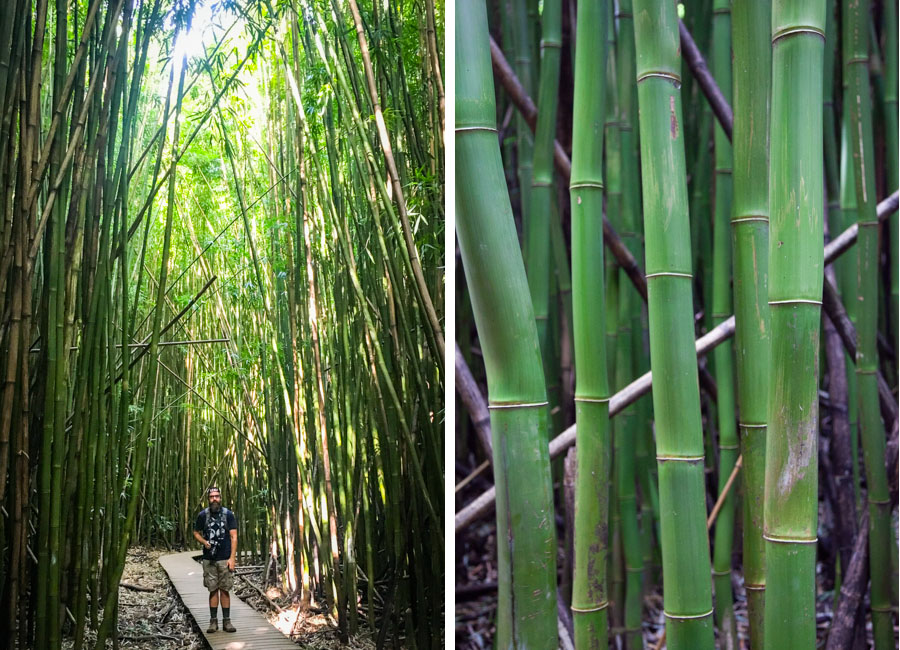 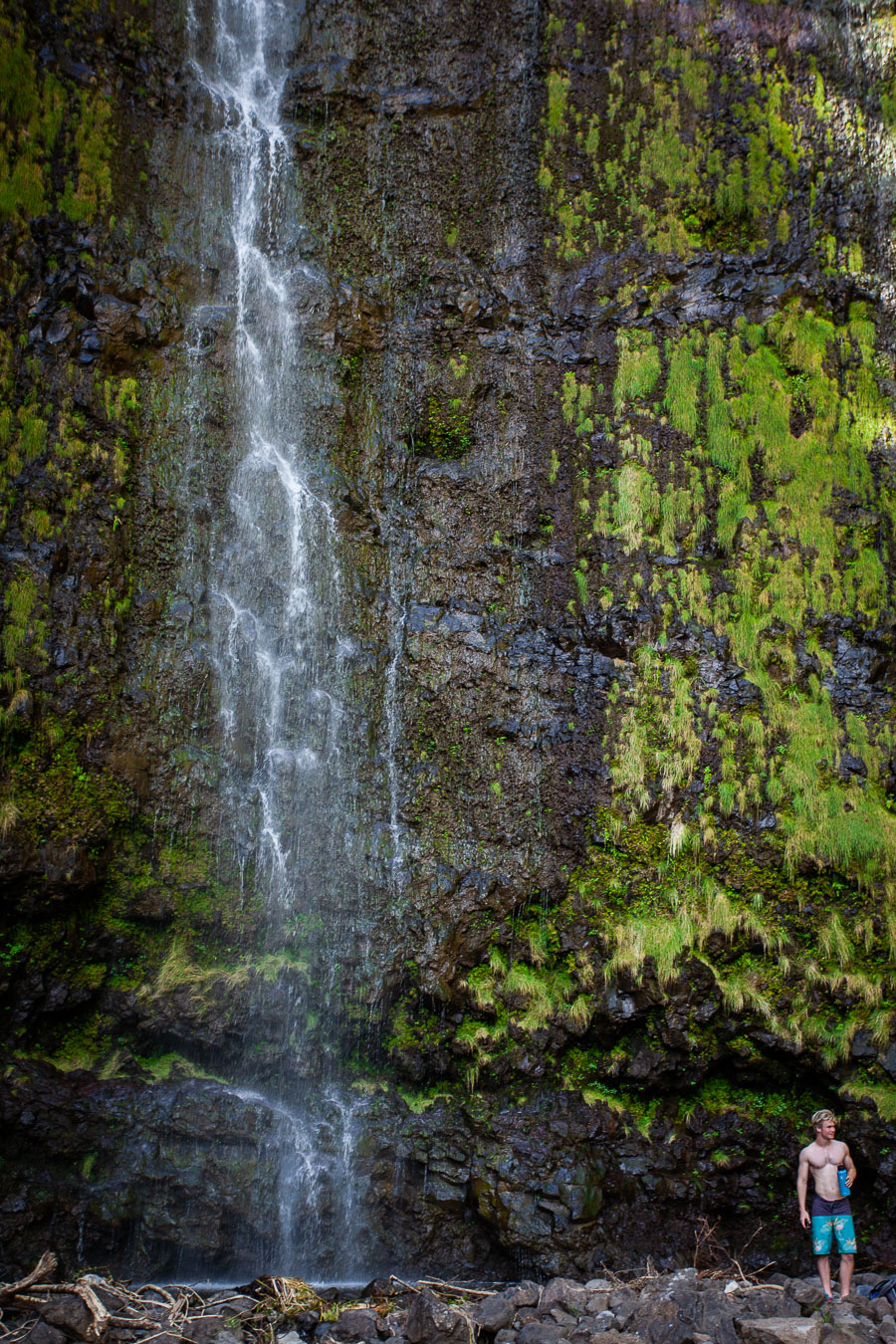 But really, one of the true highlights of the trip was going on ocean kayak trip to whale watch. It turns out that January was prime whale season, and though we saw a number of whales from the beach, I had reached out to Maui Kayak Adventures and we ended up booking a group kayak trip to see the whales a little closer. Of course, the morning of that trip, I ended up getting sick and AJ went off on his own. I was so bummed out because AJ came back positively glowing. He kayaked with one other person and though they didn’t have the spectacular whale experience that some folks did (where the whale actually came up right next to the kayak!) the ability to be on the open ocean and see the whales close by was an experience he’ll remember forever. For me, I’ll just have his glowing report and the hope that I get back to Hawaii sooner rather than later, so I can experience it for my own. 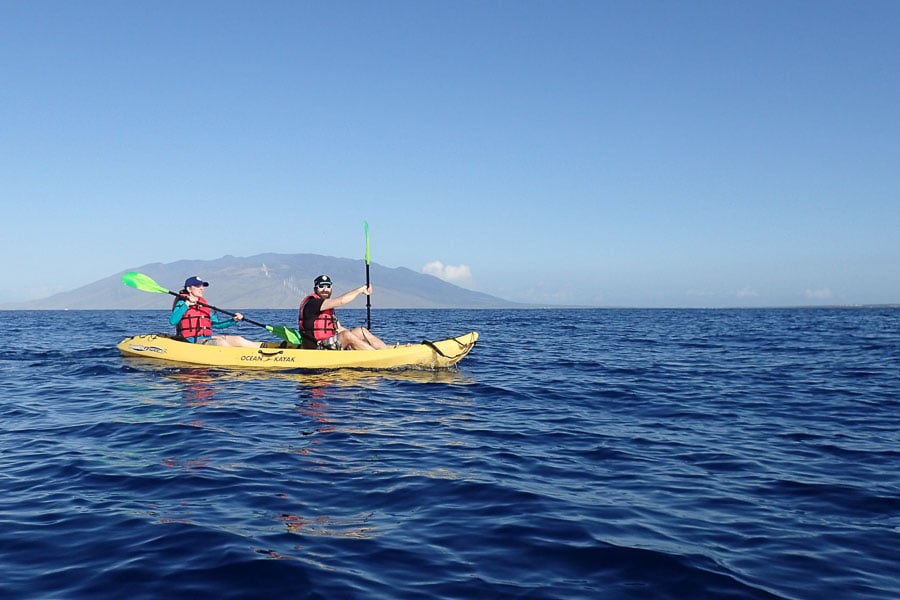 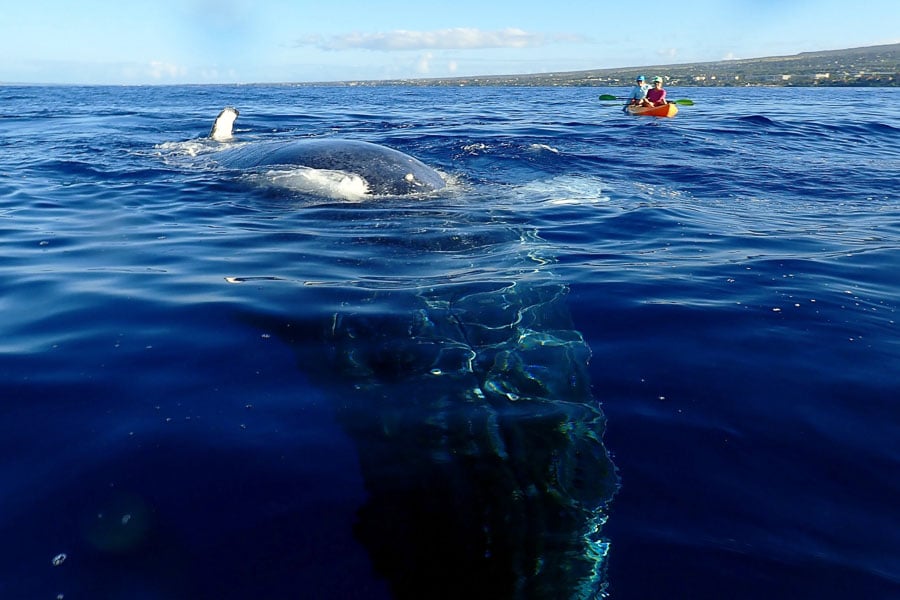 Not AJ! This happened on someone else’s kayak trip but I had to share it because it's so awesome! (Photo courtesy of Maui Kayak Adventures)

In the meanwhile, I found pineapples on sale at the store, so I snatched up a few. They are never as good as when you eat them on a beach watching the sun set. But as the fog cleared us (even if it might be momentary), we fired up the grill and I decided the smokiness would just add so much to the pineapple. A sprinkling of Korean peppers, inspired by the Hawaiian Korean influenced food of Maui, and a little hint of lime in the cake brought me back to the island. 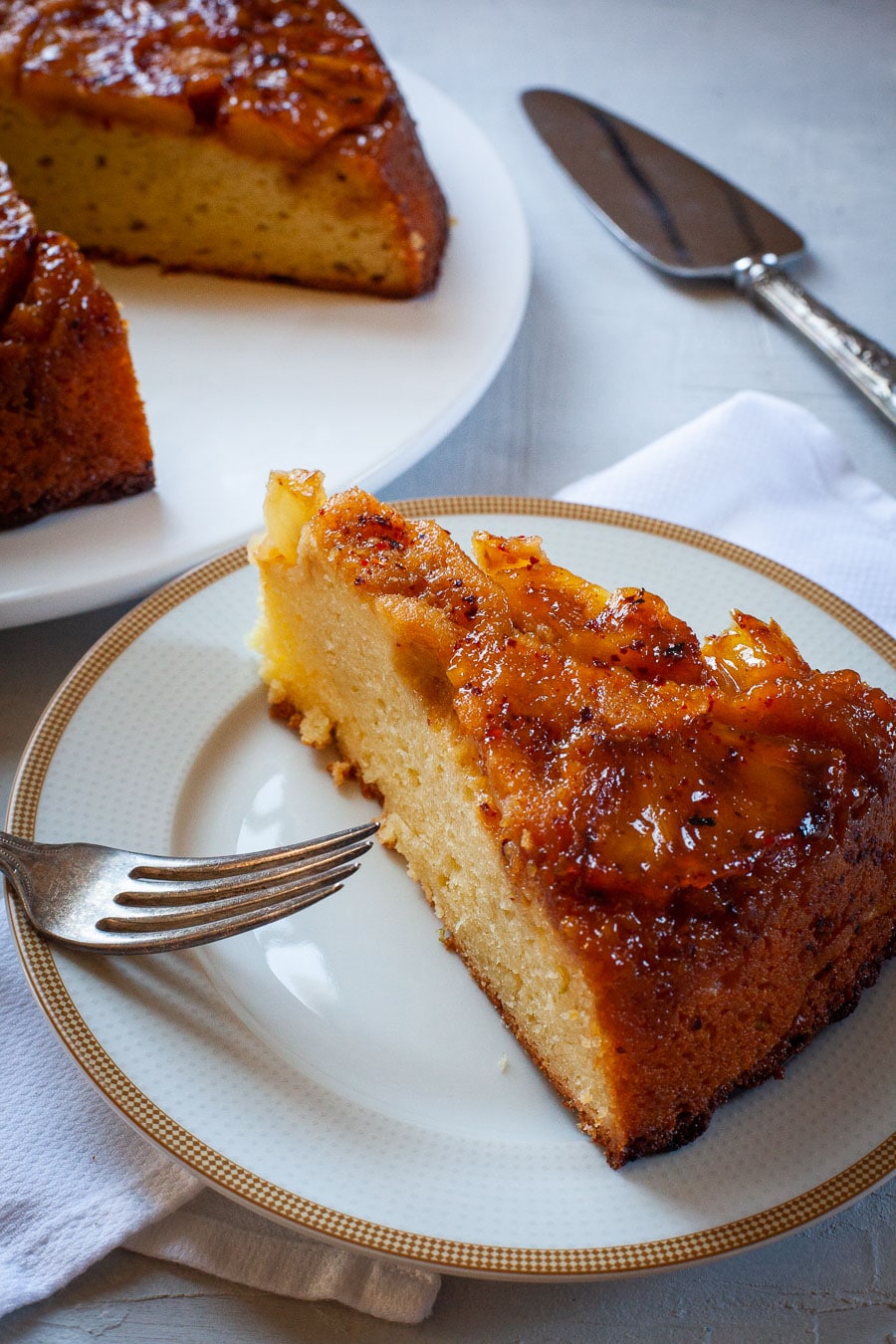 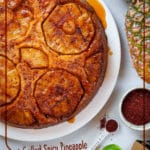 The smell of grilled pineapple reminds me of Hawaii because we always had pineapple in our condo and would throw some spears whenever we fired up the grill. Pineapple will soften as it sits at room temperature, but it never ripens or gets sweeter once it’s picked. That said, the smokiness of the caramelized sugar from the pineapple on the grill adds so much dimension that even the dull pineapple that we get here in the mainland taste richer and more complex. Try grilling the pineapple next time you fire up the grill, then store the pineapple rings in the fridge for a few days until you’re ready to make this cake. It’s well worth the minimal effort. The Korean peppers sounds a little unusual, but the mild fruity spiciness of the peppers really brings the cake to the next level. I’ve included substitution suggestions for the Korean peppers at the bottom of this recipe in case you don’t have it, or can’t get ahold of them.
Course Dessert
Cuisine American
Keyword cake, cast iron skillet, citrus, dessert, lime, pineapple, spicy, upside down
Prep Time 20 minutes
Cook Time 1 hour 20 minutes
Total Time 1 hour 40 minutes
Servings 12
Calories 500kcal
Author Irvin

This blog currently has a partnership with Amazon.com in their affiliate program, which gives me a small percentage of sales if you buy a product through a link on my blog. I only recommend products (usually cookbooks, but sometimes ingredients or equipment) that I use and love, not for any compensation unless otherwise noted in the blog post. If you are uncomfortable with this, feel free to go directly to Amazon.com and search for the book or item of your choice.
135shares