Looking for a make-ahead breakfast or brunch recipe? These breakfast fried grits are loaded with sausage, onions and cheddar cheese. (Jump directly to the recipe.) 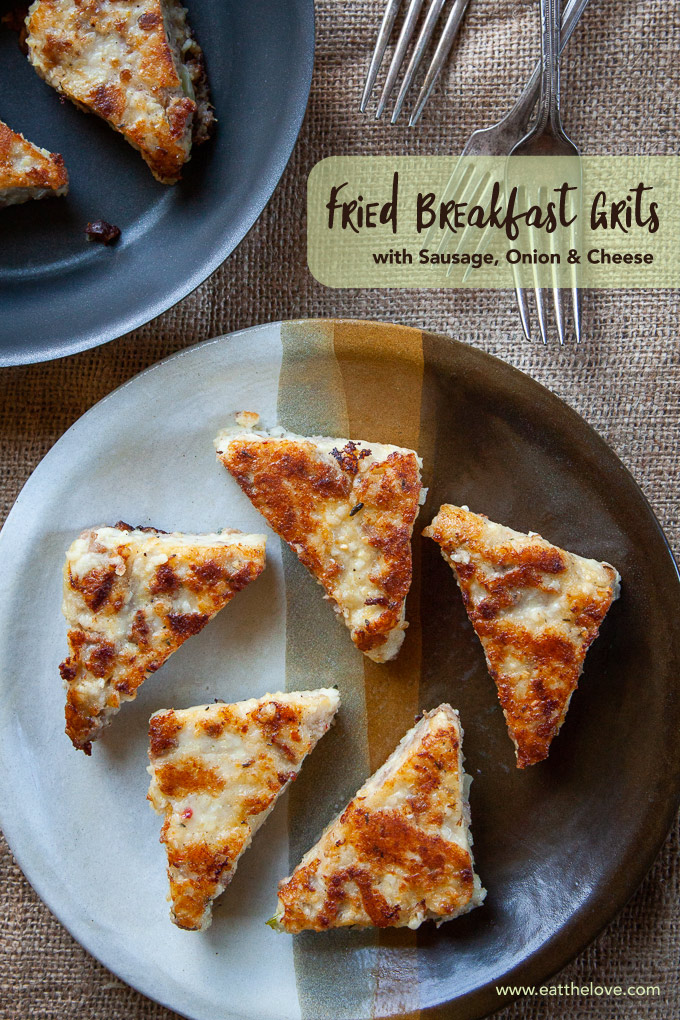 It’s been like the 1990s are back in my household as of late. It all started when I realized all the bands and artists that I listened to in college were doing reunions and recording new albums or re-releasing 25-year anniversary version of their classic albums. From Liz Phair’s Exile to Guyville to the Breeders and Belly reforming in their classic lineup and releasing new albums, to the third act of Tracey Thorn’s musical career (she’s amazing) my playlist looks like the mix tapes I made back in sophomore year of college. Then I realized TV shows were doing reboots of themselves, from X-Files to Will and Grace to the rumored Mad About You revival (they better bring back Cyndi Lauper and Ursula Buffay). Soon you’ll see me wearing stone washed jeans and flannel shirts (actually I started wearing this exact outfit about two years ago when I started taking ceramics at my community college, so that ship has sailed). 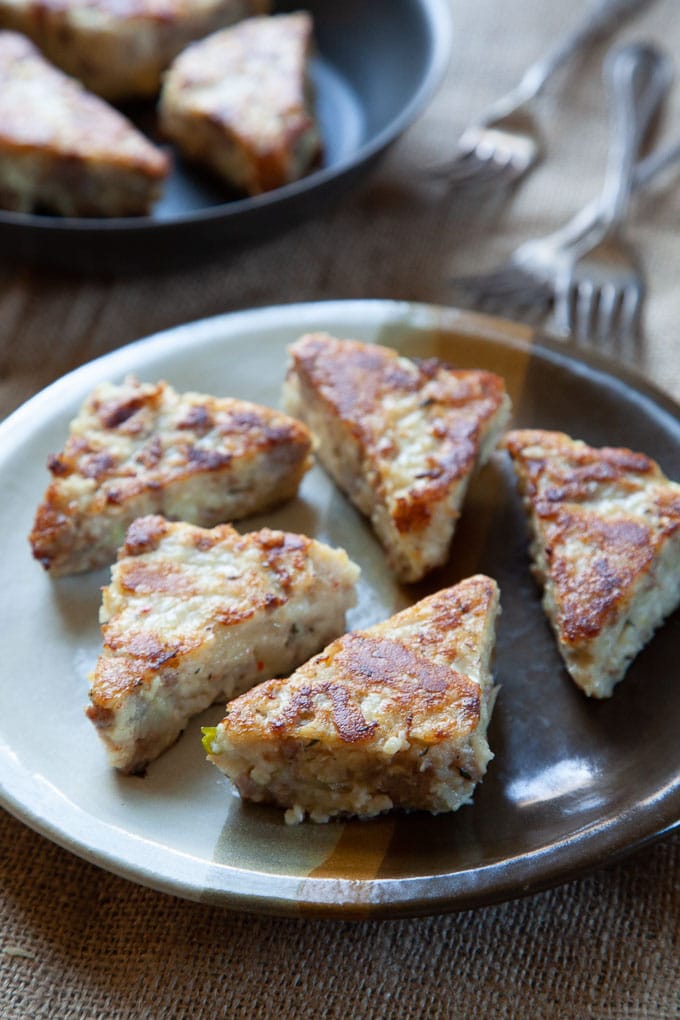 So it only makes sense that I would start revisiting the food from my college. And no, I’m not talking about instant ramen and grilled cheese (though I still have a soft spot for individually wrapped sliced cheese but don’t tell anyone that). I’m talking about the food that I would get post going out to the bars and clubs like waffles, biscuits and gravy, southern style grits and bacon. Total diner food that is so bad for you but also so very good. I don’t eat it much (just like I don’t go out the bars and clubs anymore) but I still have a nostalgia for it.

Then I had my mom over for brunch. I rarely have anyone over because our apartment is tiny. “Entertaining” someone with a meal usually means setting up the card table in the middle of our living room and covering it with a tablecloth I found at Marshall’s. Because we’re fancy like that. But it’s my mom and I had been meaning to having her over for awhile. Making brunch also means making a Brunch menu plan. And thus, I ended up making updated versions of the food from my college days. But better. Because I’m not getting any younger. 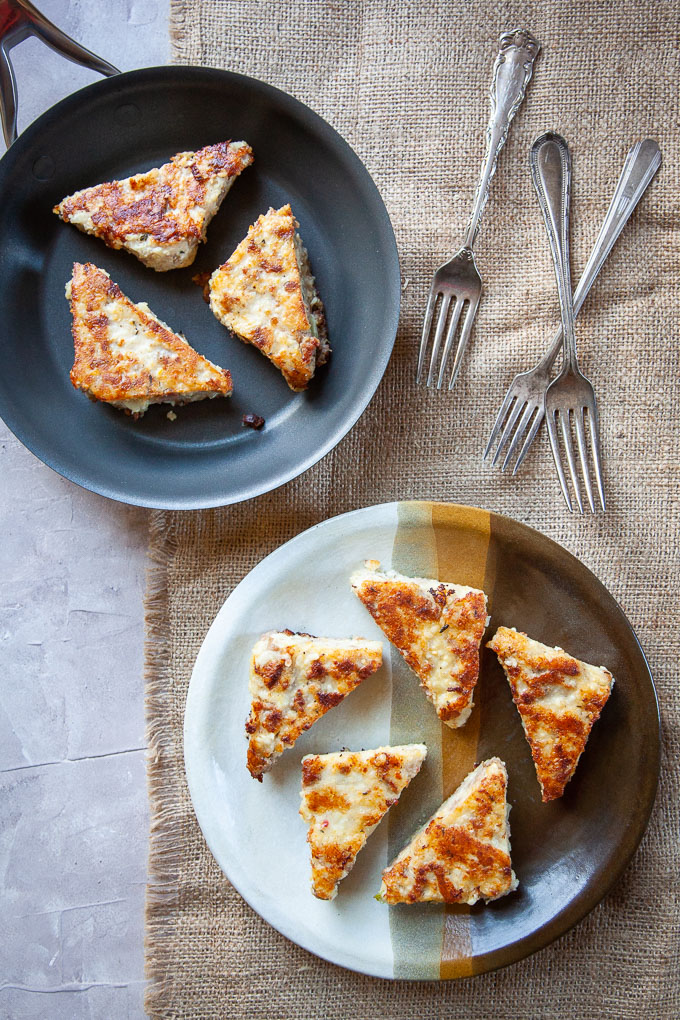 One of my favorite dishes that I made included fried grits. They’re adapted from a recipe in the cookbook One Good Dish from David Tanis. His original recipe was inspired by scrapple, a pan fried meat dish found in the Midwest and the East coast. He interpreted it using Italian sausage and polenta. I took it back to its breakfast roots, using stone ground grits and breakfast sausage. It’s my new favorite breakfast/brunch dish because it is mostly made ahead of time, with a quick pan fry right before serving. Like Tracey Thorn’s latest album Record, it’s a new classic with old school roots. 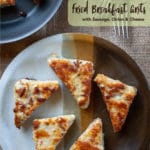 The idea of griddle frying grits isn’t new. You can find it all over the internet and in restaurants and cafes in the South. The hardest part of making this dish is the time in cooking stoneground grits ahead of time. You might be tempted to use instant grits but I implore you to skip them as they have all the flavor of kindergarten paste. You can find stoneground grits at well stocked grocery stores as well as online. It may take longer to make but you’ll be rewarded with actual flavor.
Prep Time 20 minutes
Cook Time 1 hour
Total Time 1 hour 20 minutes
Servings 6
Calories 300kcal
Author Irvin

This blog currently has a partnership with Amazon.com in their affiliate program, which gives me a small percentage of sales if you buy a product through a link on my blog. I only recommend products (usually cookbooks, but sometimes ingredients or equipment) that I use and love, not for any compensation unless otherwise noted in the blog post. If you are uncomfortable with this, feel free to go directly to Amazon.com and search for the book or item of your choice.
182shares