Instead of creamed spinach, try this creamed kale recipe, a classic with slightly more substance but equally perfect as an easy side dish for dinner! 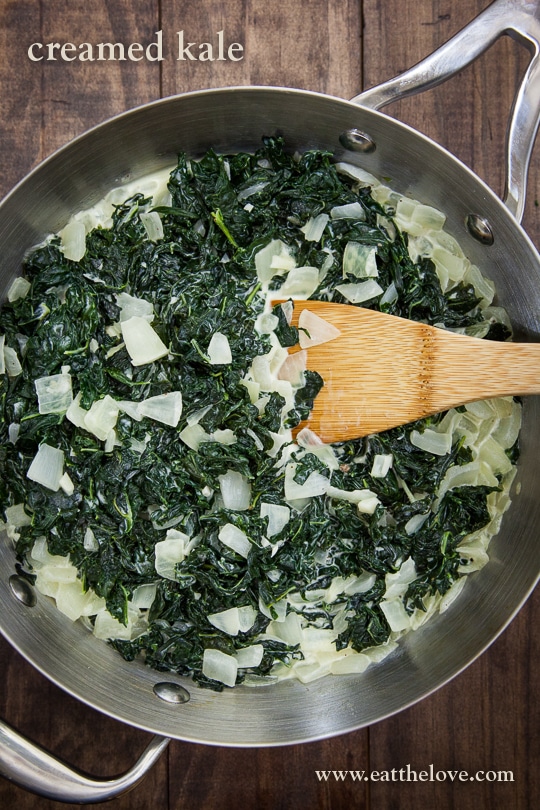 “I think I’m going to get a little bit more of that kale. And that something I’ve never said before!” said my sister-in-law as she got up from the table to head to the kitchen. Apparently my sister-in-law hates kale. That is, until I made it. I personally like kale but I don’t make it often enough and I certainly don’t make it for company that much. But I was hosting Thanksgiving dinner for my family and the meal tends to be pretty heavy with meat and carbs. And though I’ve made Brussels Sprouts and Green Beans as side dishes, creamed kale is one of my new favorites, a great and tasty greens to go on the table. 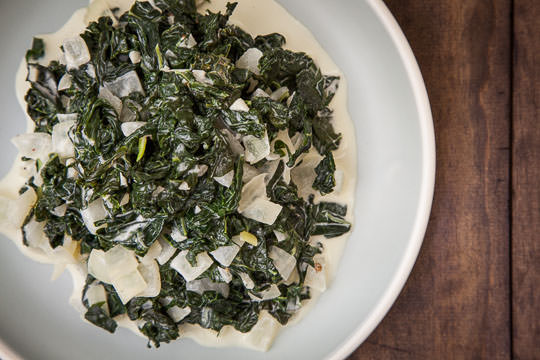 I had been planning on blogging about my creamed kale recipe for awhile, ever since Thanksgiving when my sister-in-law told me she loved it. I promised her that I’d get it up on the site but then the holidays came around, and well, you know how it is. I get side tracked with presents, travel and getting sick. Yeah, I was that person on the plane coughing up a storm. Sorry United Flight 500 to Indianapolis Christmas Eve. I was that person. Trust me, I didn’t want to be on that plane that much either. 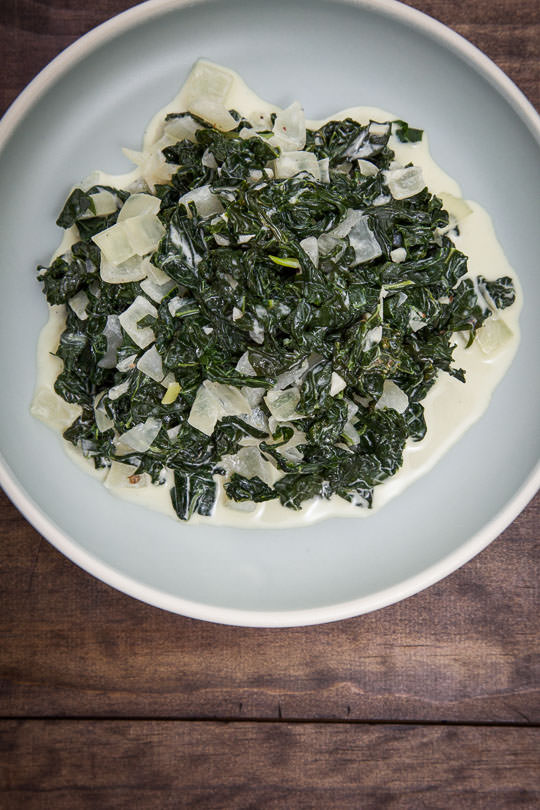 But January is here and though I had a slightly relapse with my sinuses (damn you weak constitution), I’m finally on the mend (I hope) and ready to tackle the new year with verve and zest. And with the new year, I’ll probably be making creamed kale fairly often. Hopefully my sister-in-law will too. She has been wanting me to post about it since I served it because she thinks she should eat more kale. “It’s suppose to be so good for you, but I don’t like how it tastes! Except I love this!” she declared. Well here you go. No promises on it being good for you though. I mean, it IS made with cream. And butter. I think those both may negate the good stuff in the kale. But who cares when it tastes this good! 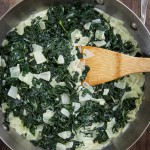 This side dish is similar to creamed spinach but with a little more substance as the the kale doesn’t just disintegrate into the cream when cooked. By first blanching the kale in hot salted water and then sautéing it with the heavy cream, the bitterness of the kale is leached out. You’re left with a great side dish that holds up better to protein main courses like steak or pork chops. This is the sort of dish you can serve to someone who claims to hate kale but likes spinach. Just don’t tell them what it is first and see if they can figure it out!
Course Side Dish
Cuisine American
Keyword creamed, kale, side dish
Prep Time 10 minutes
Cook Time 15 minutes
Servings 4
Calories 340kcal
Author Irvin

If you like this creamed kale recipe, check out some of these other kale recipes from around the web (that aren’t kale chips!):
Simply Recipes’ Kale with Seaweed, Sesame and Ginger
Food Republic’s Kale Latkes
The Year in Food’s Harvest Salad with Delicata Squash and Kale
Foodie Crush’s Kale and Cabbage Coleslaw with Marcona Almonds
What’s Gaby Cooking’s Hot Kale and Bacon Dip

This blog currently has a partnership with Amazon.com in their affiliate program, which gives me a small percentage of sales if you buy a product through a link on my blog. I only recommend products (usually cookbooks, but sometimes ingredients or equipment) that I use and love, not for any compensation unless otherwise noted in the blog post. If you are uncomfortable with this, feel free to go directly to Amazon.com and search for the book or item of your choice.
65shares