This twice-cooked eggplant and olive dish is super easy to make but looks and tastes incredibly sophisticated. The secret is California ripe olives! (Jump directly to the recipe.) 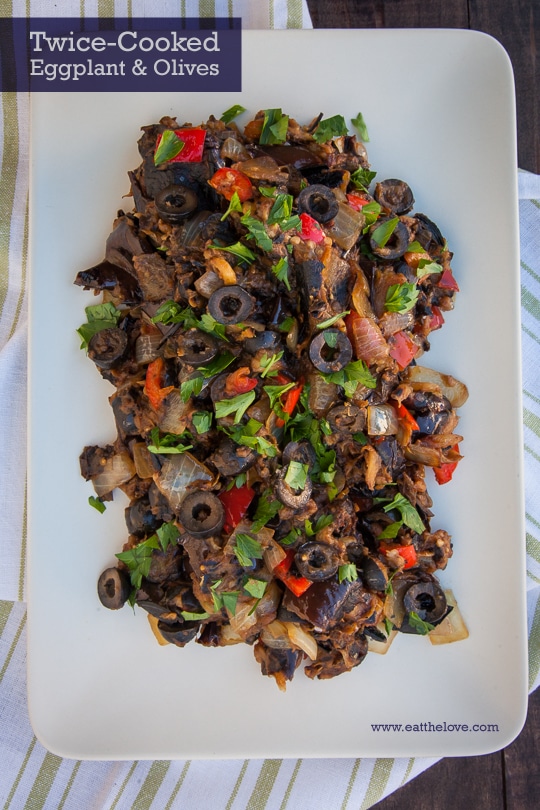 Is it possible to be both simultaneously lazy AND an overachiever? If so, I fit that mold exactly. Take for instance the collaborative cooking challenge I did with a few of my fellow food bloggers up in Napa at the Culinary Institute of America (CIA) for the California Olive Committee event. We were given 90 minutes and free range (<-pun intended) of their commercial kitchen along with what seemed like every single available produce in season to play with in the kitchen. And lots of olives. Lots and lots of California ripe olives. And while other teams decided to make one or two dishes and end a little earlier to photograph and hang out, we ended up making three dishes: a potato and olive au gratin, a salad with olive and orange vinaigrette and a twice-cooked eggplant and olive warm salad. Over-achiever much? But here’s the thing, the twice-cooked eggplant and olive dish that I decided to make on a whim (without even consulting my teammates on) was one of the easiest dishes to make prepare – which is why I picked it to make. See: lazy AND overachieving all in one. 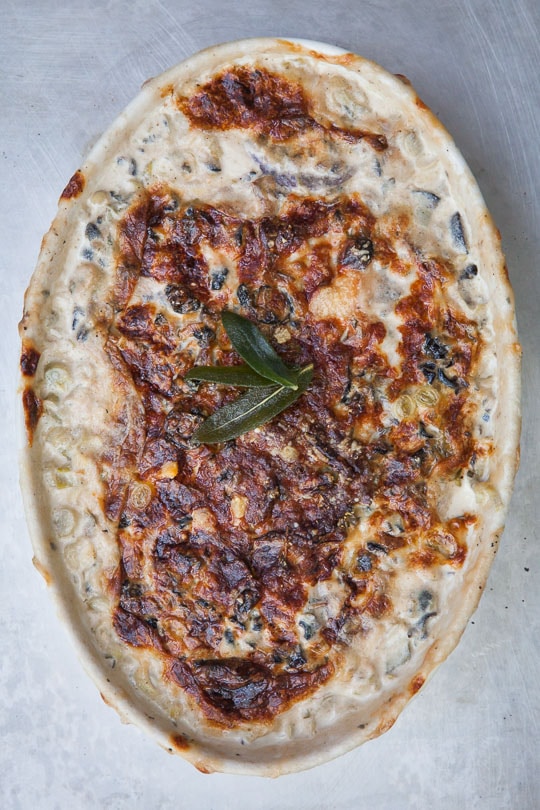 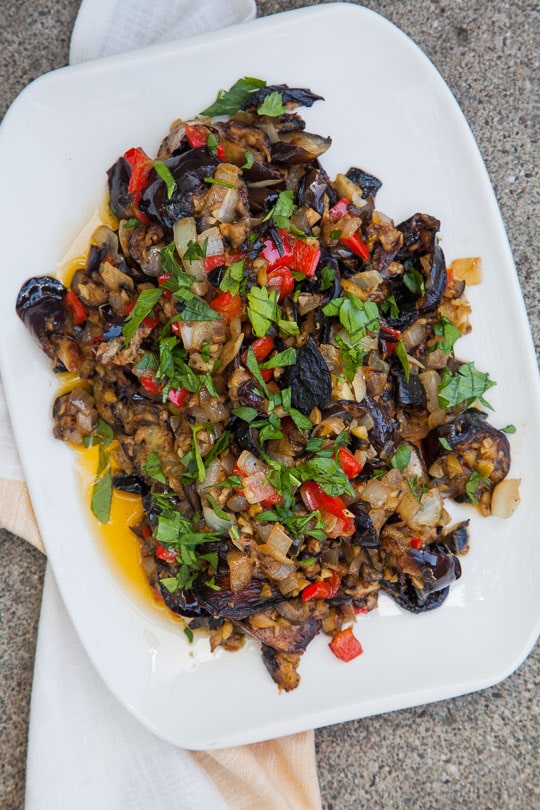 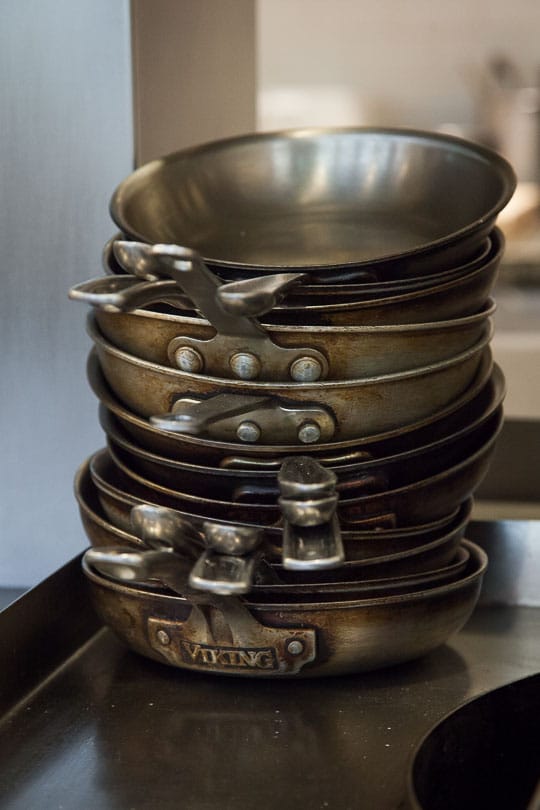 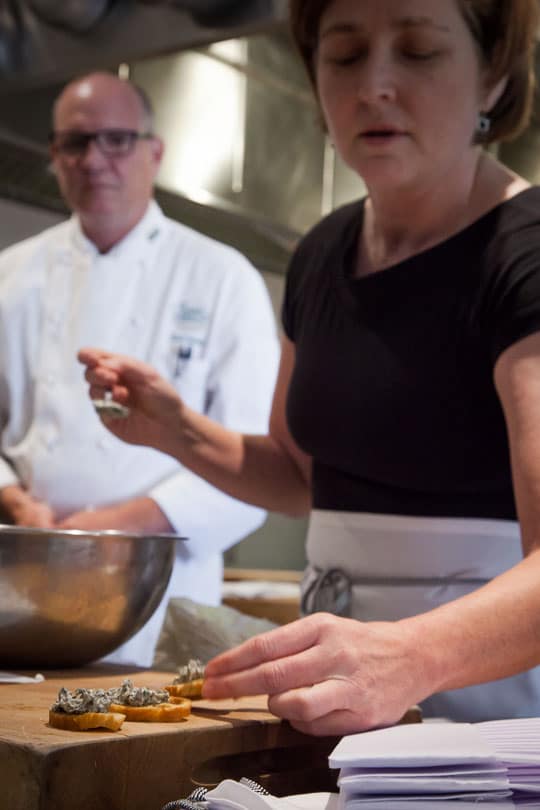 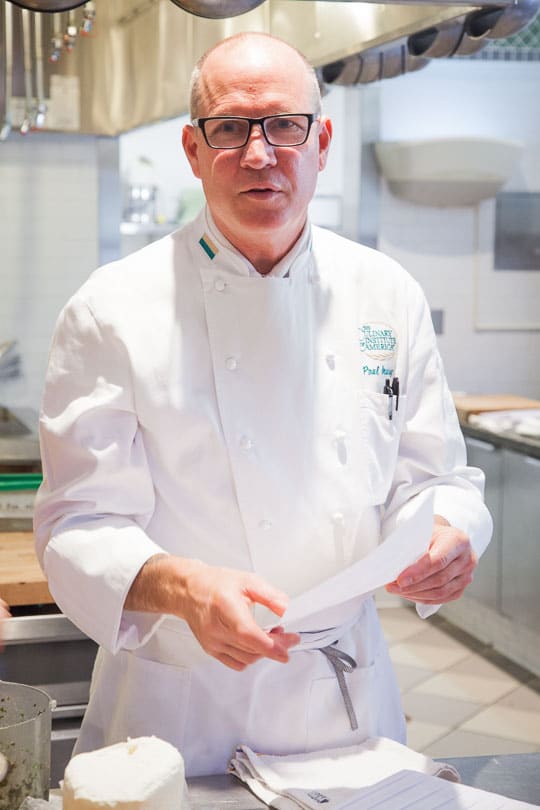 Elise of Simply Recipes had helped organize the event. She had also developed some pretty awesome recipes using olives, including a pork tenderloin with olive tapenade and even a dessert using candied olives! But it was the smoked olives that really impressed everyone. Smoky and rich, with a meaty texture, the smoked olives (which Elise and Chef Paul Irving from CIA showed us how to do on the stovetop) were pretty amazing and would be a great option for vegetarian or vegan folks who are looking to add a salty umami meaty-style flavored ingredient to their arsenal. 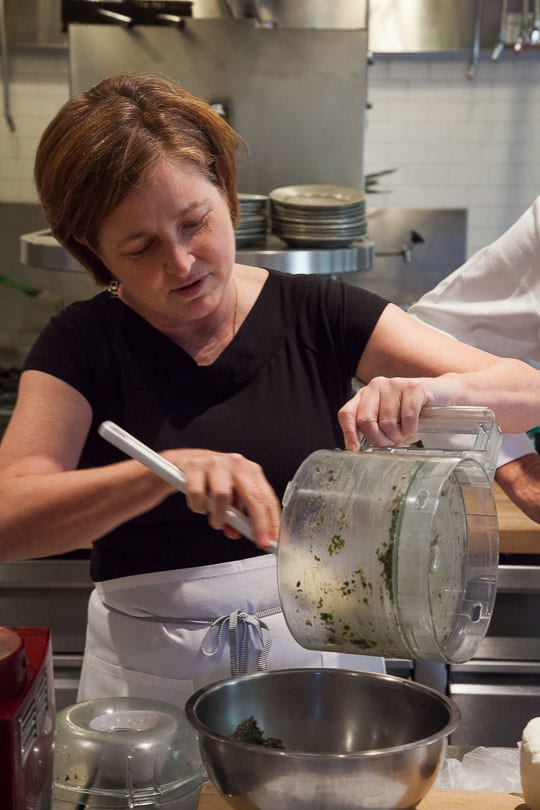 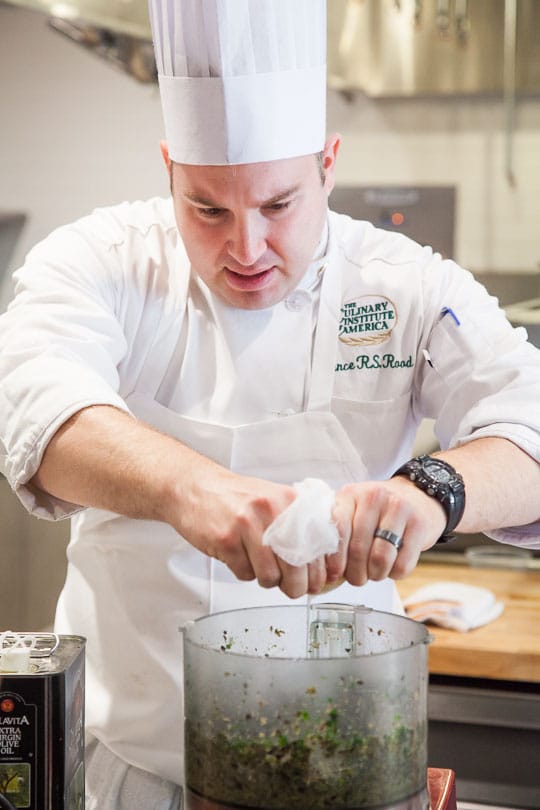 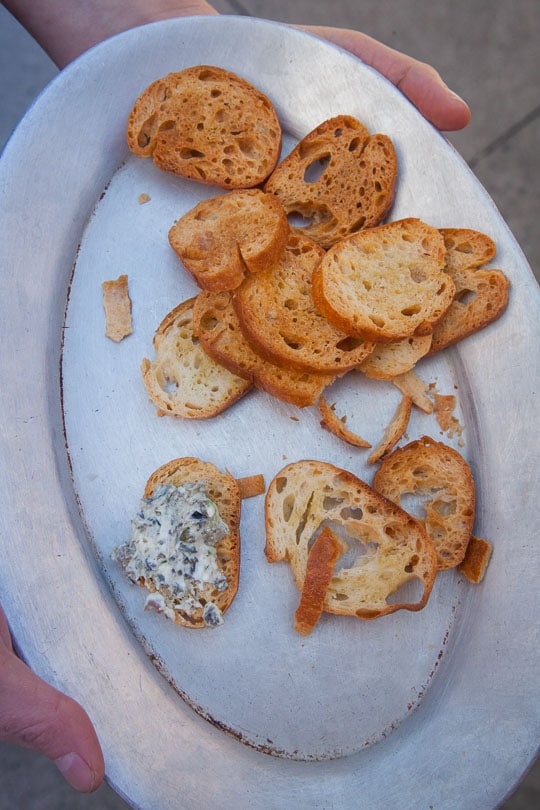 But the most fun part of the event had us bloggers split into random teams of four to play in the kitchen with both olives and a huge range of ingredients. We had an hour and a half to make whatever we wanted, and though it wasn’t a competition, we decided we were in it to win it! And that meant coming up with three different dishes featuring olives (including the twice-cooked eggplant and olive dish which, as I said, I just went rogue and made without even consulting the rest of the team). And though everyone’s recipes were pretty spectacular, I’m totally bias biased. Clearly our dishes were the best! And unlike the other teams, we used all 90 minutes to make our three dishes. I think we might have been the only dishes that folks went back for second samples! 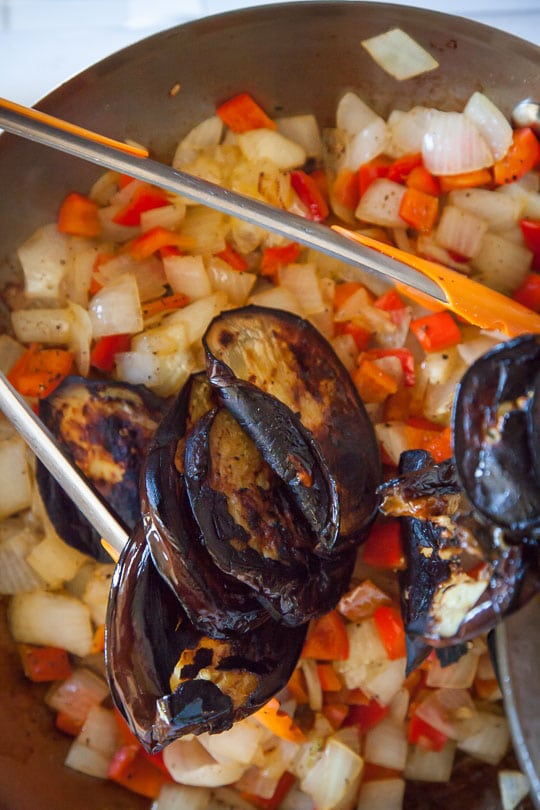 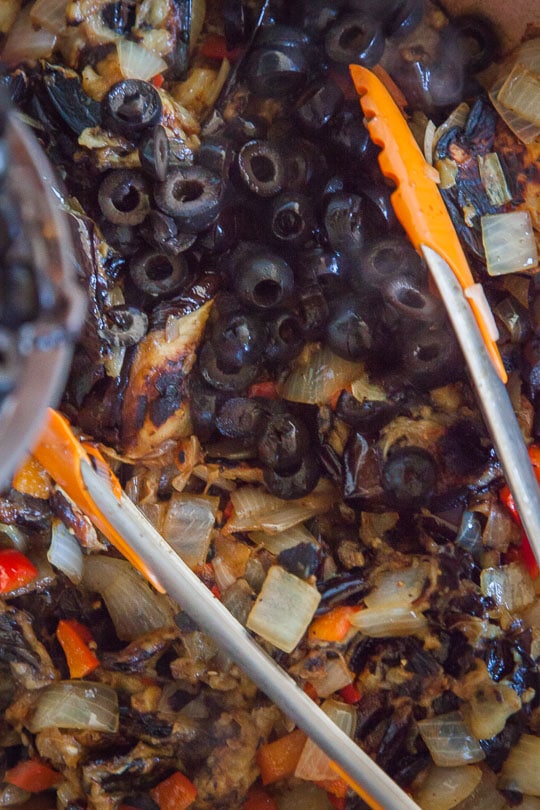 In the end I had a number of folks ask me about the twice-cooked eggplant and olive dish. It’s a super easy dish with very few ingredients required. In other words, even if you are a lazy cook or an overachieving kitchen chef (or both), this is the perfect dish for you. 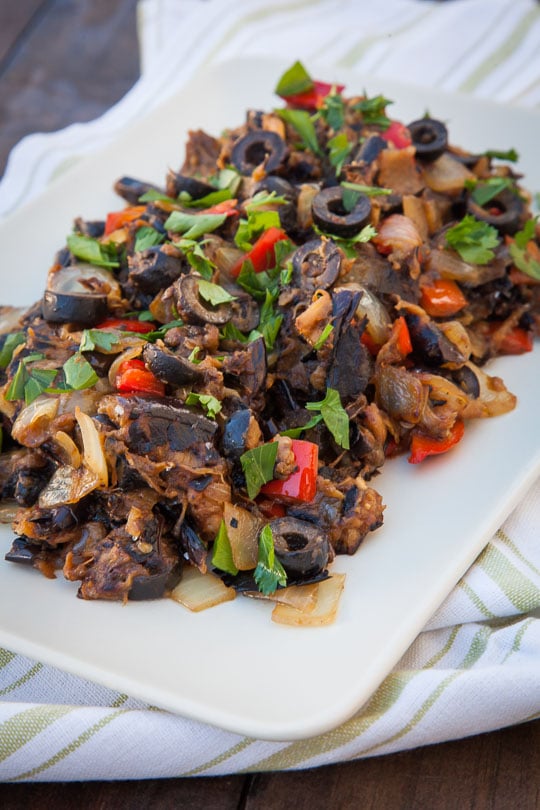 The secret to this dish is to cook the eggplant until it is nearly black. You’ll wonder if you’ve ruined the eggplant but it will be fine and the nearly charred eggplant takes on an earthy, nearly chocolatey depth of flavor. The addition of the sliced olives in the end adds a salty compliment to the eggplant so don’t over season the dish. Add the olives first, cook, then taste and season with extra salt to the level you want. 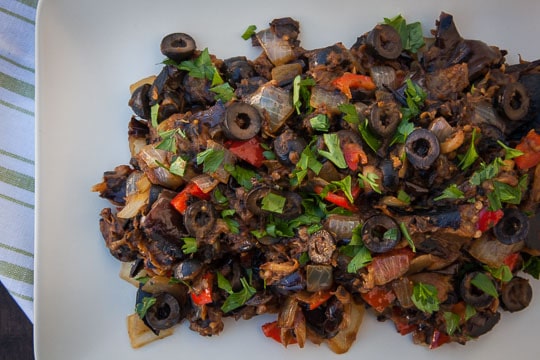 Directions
1. Slice the eggplant into 1/2-inch thick pieces. Heat 2 tablespoons of olive oil on a large skillet and then place eggplant rounds in the hot oil. Cook until the eggplant side starts to turn black, drizzling more oil over the eggplant as the skillet starts to look dry. The eggplant will soak up the oil a lot! Flip the eggplant over and cook the other side the same.

2. Remove eggplant to a heatproof bowl and repeat with the remaining eggplant slices (no need to clean it). Once all the eggplant has been cooked and removed from the skillet, drizzle two more tablespoons of oil into the pan (again no need to clean it) and heat until shimmery hot. Add the red bell peppers, onions, salt and pepper. Cook until the onions start to look translucent. Add the eggplant and cook, breaking up the eggplant with a spatula or a pair of tongs. Once the eggplant is broken down, add the olives and cook until heated.

3. Remove from heat and sprinkle 3 tablespoons of lemon juice or sherry vinegar over the dish and taste. Add additional lemon juice or vinegar if needed, then season with more salt and pepper to taste. Plate on a serving dish and sprinkle with chopped parsley. Serve warm.

This blog currently has a partnership with Amazon.com in their affiliate program, which gives me a small percentage of sales if you buy a product through a link on my blog. I only recommend products (usually cookbooks, but sometimes ingredients or equipment) that I use and love, not for any compensation unless otherwise noted in the blog post. If you are uncomfortable with this, feel free to go directly to Amazon.com and search for the book or item of your choice.
86shares