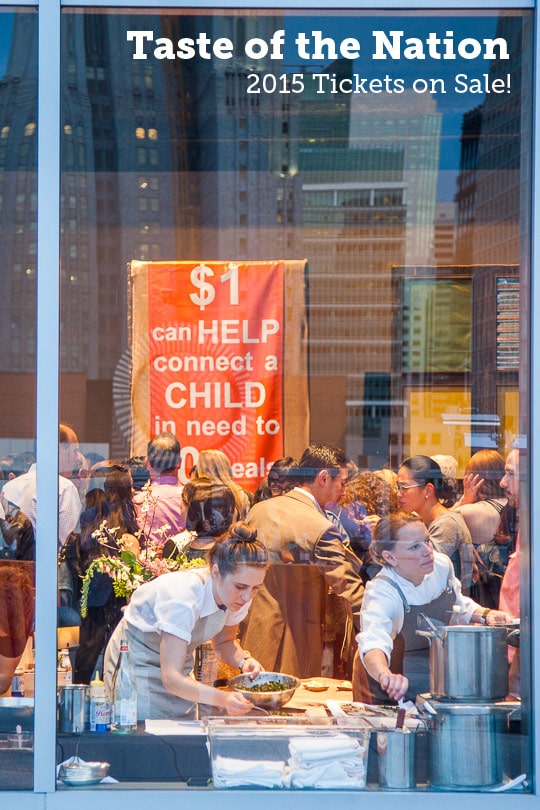 Hey there San Francisco readers! I just wanted to give you all a heads up on the Taste of The Nation fundraising event happening Thursday, March 26, 2015. Taste of the Nation is one of the coolest food events happening here in San Francisco, with beneficiaries including 18 Reasons, Children of Shelters, California Food Policy Advocates and California Association of Food Banks. Last year they were able to raise more than $230,000 and they’ve raised their goal to $250,000 this year! I covered the event last year and it was pretty spectacular, with eats and treats form some of the top San Francisco restaurants. This year sounds like it’s going to be even more spectacular, with bites ranging from a Shiro Maguro Tataki Salad from ICHI Suchi + Ni Bar, Shrimp and Pork filled Cucumbers from M.Y. China to Barbacoa lamb riblets with mole verde from Tacolicious. With over 40 different restaurants serving up bites, I’m totally excited to be going. And as an incentive for my readers, Taste of the Nation is giving 20% off for both VIP and General Admission tickets. Just use the code 2015MEDIACOMP when you buy tickets! For those who can’t make it, I’ll be sharing bites during the event on Instagram using the hashtag #SFTaste as well as posting a follow up photo essay here with highlights of the food! But I hope to see you all there!

[And for all you non-San Francisco folks, don’t worry, I’ll be back next week with a recipe…]

This blog currently has a partnership with Amazon.com in their affiliate program, which gives me a small percentage of sales if you buy a product through a link on my blog. I only recommend products (usually cookbooks, but sometimes ingredients or equipment) that I use and love, not for any compensation unless otherwise noted in the blog post. If you are uncomfortable with this, feel free to go directly to Amazon.com and search for the book or item of your choice.
22shares