February is a special month for AJ and I. No, it’s not our anniversary month, and no it’s not because we love to celebrate Valentine’s Day. It’s because we take the entire month of February off from social obligations. That’s right, we get to actually use the word “No” for a little bit, something AJ and I need to learn to do more of. We call it our “social moratorium” month and we look forward to it every year. The insanity of the holiday season always spills over into January and by February we are burnt out. So we call it quits for a month, tell everyone that we can’t commit to anything for February and we’re so much happier for it. And what a better way to start our month long social sabbatical by celebrating Chinese New Year! That’s right, February 3rd is the Lunar New Year and I decided to dive deep into my heritage and make traditional Taiwanese Pineapple Cakes. Except I didn’t make them traditional, because let’s face it, I’m so not very traditional. Instead I made rosemary & vanilla infused honey pineapple cakes. 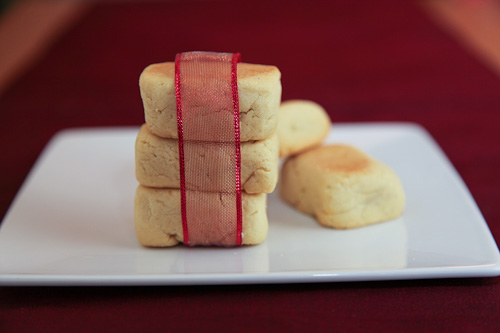 Now, in case you aren’t aware, us Asian folks aren’t super into desserts. Or maybe they are, but I’m just not super into Asian desserts. Having grown up on egg custard tarts, red bean soup and Chinese mooncakes, I craved the sugary white cakes and chocolate chip cookies that my white people friends always seem to have. But pineapple cakes are the exception to the rule. Soft and chewy, moist and sweet, they were like a richer, more luscious pineapple version of Fig Newtons, and we only really got them when someone was visiting from Taiwan, or had come back from Taiwan. 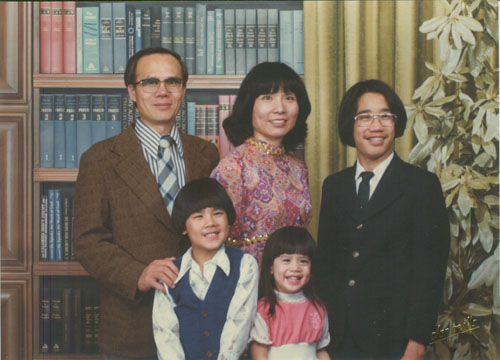 Random gratuitous shot of my family. Note my kick ass blue vest. Also note that I still smile like that.

Which, now that I think about it, was pretty often. My parents always knew SOMEONE coming or visiting from Taiwan. Which meant we had pineapple cakes in the house fairly often.

As I got older I started to outgrow the sweet manufactured taste of pineapple cakes. So with the February social moratorium in place, and Chinese New Year right around the corner, I started to poke around the web to see how I could make them myself. And I discovered a few things. First, the pineapple filling in the cake is actually made from both pineapple and winter melon. Apparently an all pineapple pulp filling is way too sweet and the winter melon mellows it out. Second, there’s a reason why the pineapple cakes tasted so sweet and manufactured, the ingredients are pretty straightforward, not a lot of nuances. It’s just sweet pineapple paste and buttery pastry. 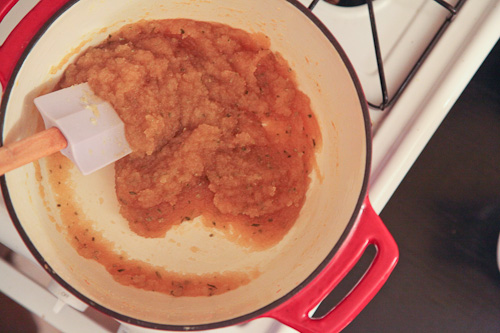 I resolved to fix that. Rosemary helped elevate the floral notes that the pineapple already had. Vanilla rounded out the buttery rich pastry and played well with the pineapple. Honey gives the filling a depth and roundness as opposed to just a flat sweetness. 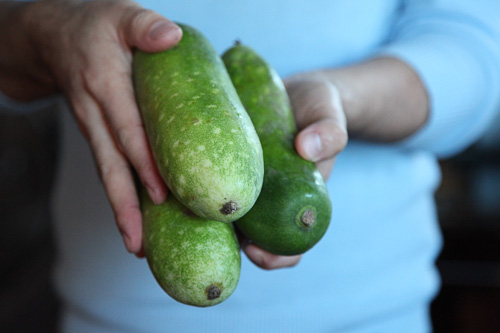 Tracking down some winter melon proved to be a little harder for me, as the Asian grocery store I go to in the Mission was all out of it (they apparently never sell, so they only stock one wedge at a time if that at all – being located in the Mission, I guess the hipsters had no idea what to do with it). But I did score some moqua, which is a pretty good substitute for winter melon. Otherwise known as hairy melon or fuzzy gourd, moqua is a winter squash that is related to winter melon (and occasionally mistaken for winter melon, but they are different). If you can find winter melon, feel free to use it instead. 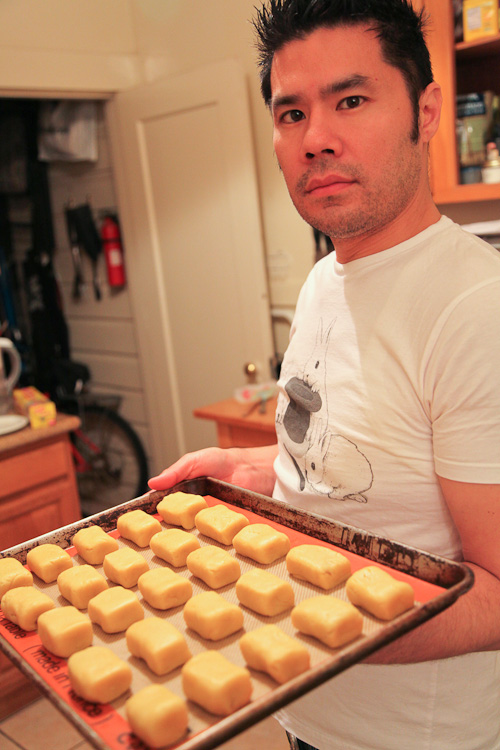 Right before I put the cakes into the oven. Note that I'm wearing a t-shirt with rabbits on it. It's the Year of the Rabbit. That was TOTALLY intentional.

In the meanwhile, AJ and I are going to kick back and relax for the month of February. It’s a short month, only 28 days and I know it’s going to fly by fast. But in the meanwhile, I’m eat some of these pineapple cakes and know that I have a few short weeks where the only thing I have to do is… nothing at all. 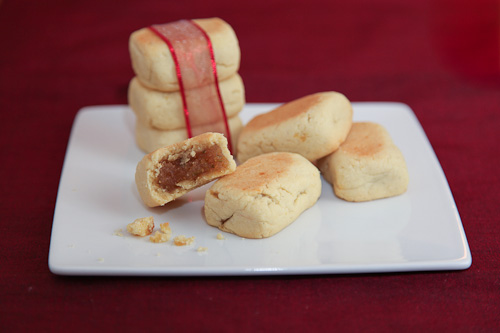 These pineapple cakes are based on the pineapple cakes that you can find in pretty much any bakery in Taiwan, which are a traditional treat eaten for Chinese New Year. Other than trying to source the winter melon, most of the ingredients are pretty easy to find. Traditionally pineapple paste filling is made with maltose syrup, and even though I have some of the syrup in the pantry, I went with honey instead to give the filling more depth, as opposed to the one note sweetness that the maltose syrup would impart. If you want to make a more traditional pineapple cake, just leave the rosemary and vanilla out and use maltose syrup instead of honey.

Keep in mind that you need to make the pineapple paste filling first, and it takes a little bit of time to make, and then cool down. I recommend making it the day before, and letting it cool overnight in the fridge.

1. Preheat an oven to 325˚F. Line a baking sheet with parchment paper of silipat.

2. In a medium mixing bowl, combine the flour, corn starch, baking powder and salt. Stir vigorously with a whisk to blend together.

3. In a stand mixer fitted with a paddle attachment, place the unsalted butter, cut into 1/4 inch cubes and shortening. Beat on medium until light and well blended. Scrape down the sides of the bowl and add the confectioners’ sugar and cream until blended. Scrape down again and add the egg yolks, one a time, beating until blended in, scraping down the sides between additions. Slice the vanilla pod vertically down the bean, and then scrape the seeds inside the pod into the bowl with a knife. Add the vanilla extract as well, and then beat to blend.

4.  Scrape down the side of the bowl. Add the egg and beat for 1 minute on medium high or until the egg looks well distributed. The batter will look broken, but don’t worry, it will come together once you add the flour.

6. Roll a dough ball (about 2 tablespoons, slightly smaller than a golf ball) into the palm of your hand. Then flatten the ball, passing the dough between your palms until you have a disk roughly the size of your palm. 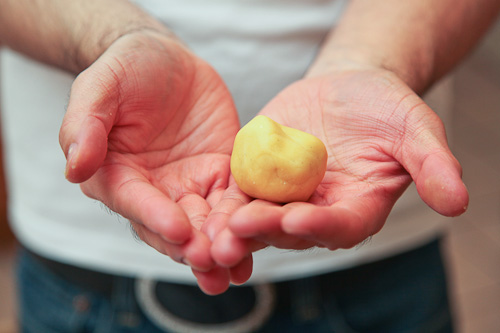 Slightly smaller than a golf ball. 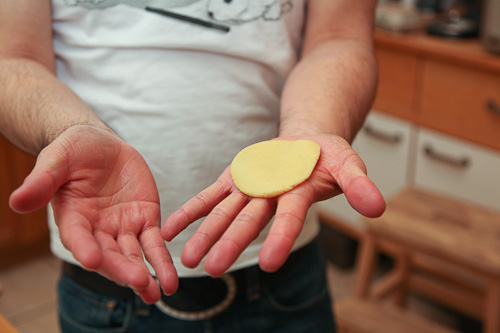 7. Place a heaping teaspoon of the pineapple paste into the center of the dough disk, and pinch the edges of the disk together, forming a “dumpling” shape. 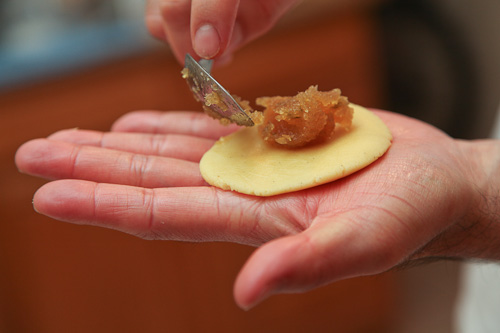 Spooning pineapple paste onto the dough. Don't put too much. 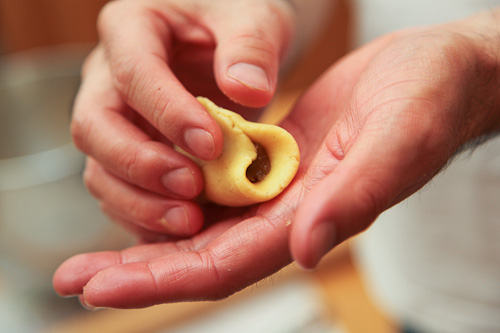 Pressing the dough seam together. 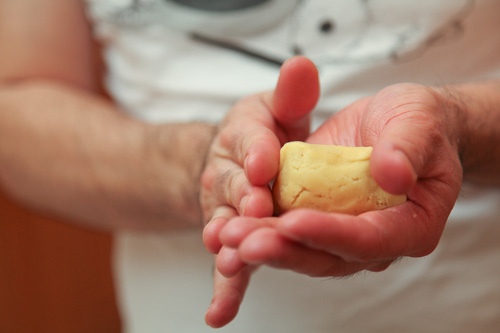 Forming the cake into a rough rectangle. 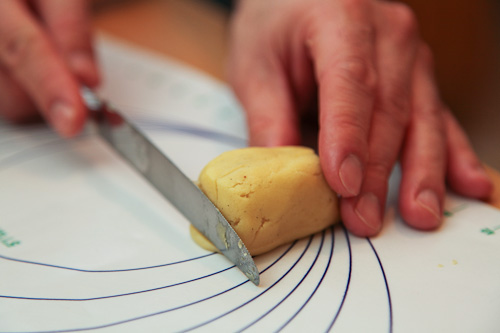 Using the flat side of a butter knife to square the sides.

8. Place the cakes about 1/2 inch apart on the baking sheet, seam side down and continue until you have used up all the dough and pineapple paste. 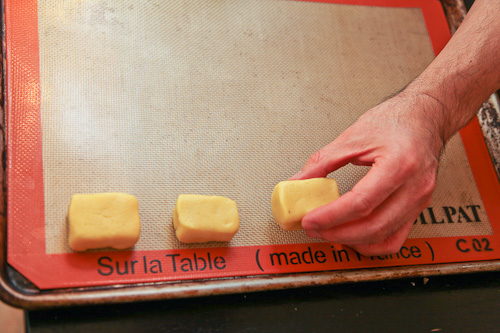 Place the cakes 1/2 inch to 1 inch from each other.

9. Bake in the oven for 14 minutes and then carefully flip over all the pineapple cakes, so that the “top” of the cake is faced down. Put back in the oven and bake for an additional 14 to 16 minutes until the cakes look golden brown. 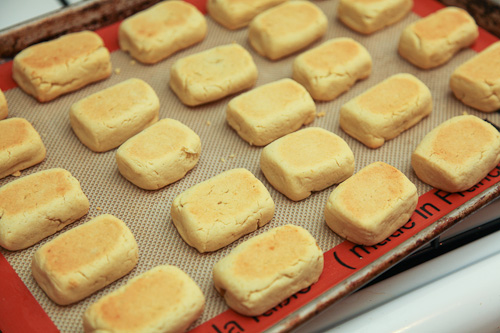 Fresh from the oven.

10. Let the cakes cool on the baking sheet for about 10 minutes until moving them to a wire rack to cool completely.

1. Put the diced pineapple in a food processor and process until you have a fine puree. You should have about 1 3/4 cups of puree. Pour into a Dutch oven or large heavy stockpot.

2. Put the moqua in the food processor and process until it is finely shredded. You should have about 3 cups of shredded melon. Pour the shredded melon into the same dutch oven or heavy stockpot. Rinse out the processor but don’t put it away, you’ll need it again. Add the two sprigs of rosemary.

3. Cook on medium heat, stirring occasionally, until most of the juices have evaporated and the shredded melon starts to turn translucent, about 20 minutes.

4. Take the rosemary branches out and discard them. A lot of rosemary leaves will still be left behind, which is fine. Spoon the pineapple mixture back into the food processor carefully (it will be hot). Processor for a minute or two until you have a puree with the rosemary leaves chopped into small bits.

4. Pour back into the Dutch oven or stock pot and add the sugar. Cook for an additional 8 to 10 minutes or until the filling has thickened.

5. Pour the honey into Dutch oven and continue to cook for an additional 12 minutes or so. The final paste should be thick, similar tomato paste in consistency and smell fragrant of rosemary.

6. Transfer to a heatproof bowl or measure cup and let cool to room temperature. Cover and move it to the fridge until cold.

This blog currently has a partnership with Amazon.com in their affiliate program, which gives me a small percentage of sales if you buy a product through a link on my blog. I only recommend products (usually cookbooks, but sometimes ingredients or equipment) that I use and love, not for any compensation unless otherwise noted in the blog post. If you are uncomfortable with this, feel free to go directly to Amazon.com and search for the book or item of your choice.
468shares