You are here: Home / bars / Gluten Free Lemon Blueberry Bars and how I need to let go of the pretty.

I’m going to talk ugly for a little bit here. And when I say ugly, I don’t mean ugly as in, “Girl, you best put down that extra piece of fried chicken, because you don’t need more thigh to go with that outfit” sort of ugly. I reserve that sort of conversation with my friends who tend to swivel their heads a lot and fingersnap frequently (full disclosure, I physically cannot fingersnap; someone take away my gay card). No, no, I mean ugly desserts and baked goods. Because, though this is a food blog, I sometimes make desserts that aren’t totally up to typical food blogging standard. My friends look at what I make and often wonder if I ever have failures, and let me tell you, I do. I do a lot. So when I made these gluten free lemon blueberry bars, I took one look at them and thought to myself “Hmmm. Those aren’t up to snuff.” 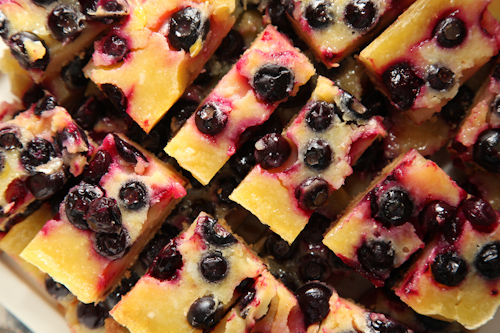 Not the prettiest Lemon Blueberry Bars, but they are darn tasty, as I would soon find out.

Now you look at them, and you don’t think they are the most hideous things in the world. They aren’t completely repulsive, they don’t look like an utter failure, but really, they aren’t show stopping either. They aren’t the glittery beauty that gets featured on the front cover of shiny glossy magazines that no longer exist (oh, how I wish the print magazine of Gourmet was still around, so I could at least have the potential to fulfill my dreams of having one of my baked good on the cover of it, no matter how improbably that reality would be). They aren’t even really blog worthy to look at. Sure, I could have put them on a pretty plate that looked like I spent way too much money on (but since I’m cheap, I actually got it at a discount store), added a few blueberries as a prop and shot it with a soft focus, slightly over-exposing it, to give it that Donna Hay beauty shot look. Or I could have photoshopped the heck out of it or given it a really short depth of field to make it arty and to make sure it would be accepted on Foodgawker/Tastespotting/whatever other visual food browsing site out there you use, thereby ensuring I get hundreds of more hits from people who don’t really stick around to read my blog but bounce to the next pretty little thing once they realize that I have a lot of words on my posts, and not enough food porn-esque shots to keep them satisfied. But I’m not going to do that. I’m keeping it real. I shot on a table, piled high with a bunch of other desserts, and I shot it fast because other people were at this party, waiting to dig into the desserts. They were just humoring me with my photography. 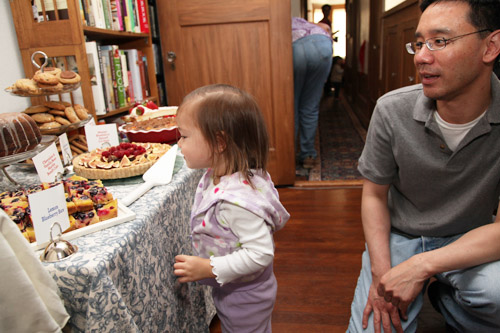 My niece Sydney patiently waiting to dive into the Lemon Blueberry Bars.
Also, I don’t know who’s ass that is in the background, but I kind of love the fact that it is in this shot.

Because here’s the thing: not every item I make is picture perfect. Not every dessert or baked good get photographed with a bounce sheet and a scrim against my window to give it a perfect diffused lighting (full disclosure, I live in San Francisco, where the fog tends to functions as a perfect diffuser anyway). Not every item I bake gets a hero shot, against an artfully distressed piece of plywood, rustic in it’s sandpapered down wood and whitewash paint. I just don’t have time for that (nor do I have space in my tiny one bedroom apartment to store multiple slabs of plywood). Especially when I’m preparing 20+ desserts in two days for our semi-annual dessert party. I just don’t have time. 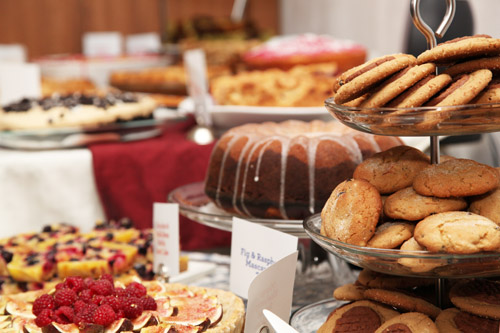 So many desserts, so little time. 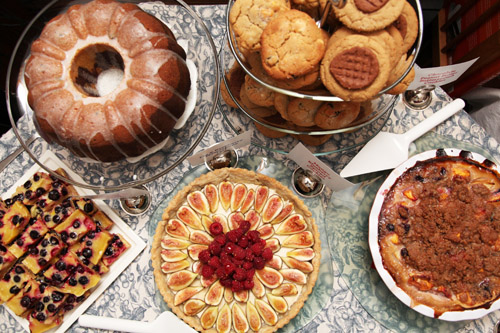 Desserts and more desserts. With a side of desserts.

So I come back to my ugly gluten-free lemon blueberry bars. I made these for a dessert party when I realized I didn’t have enough gluten free items for my gluten sensitive friends. They seemed like a good idea at the time. My friend Stephanie is often telling me that I swirl everything I make. And I do. I’m totally guilty of swirling, marbling and mixing to my hearts content. However, this time I thought to myself, why get all fussy with the blueberries, pureeing them, and then swirling them around the lemon? Why not just put the whole blueberries in the lemon curd? I was baking 20+ desserts, this was not the time to get fussy. 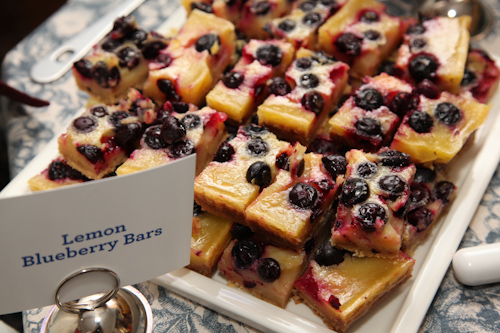 Lemon Blueberry Bars – the blue type on the sign meant they were gluten free.

I pulled these suckers out of the oven. Took a look at them. Then thought to myself, I can’t serve these. They’re ugly. But instead of just composting them, I stuck them in the back of the fridge and forgot about them. A few days later, when I pulling everything out for the party, I found them buried in the back of the fridge, and though to myself “oh what the heck, I’ll put them out there. I need more gluten free desserts anyway.” 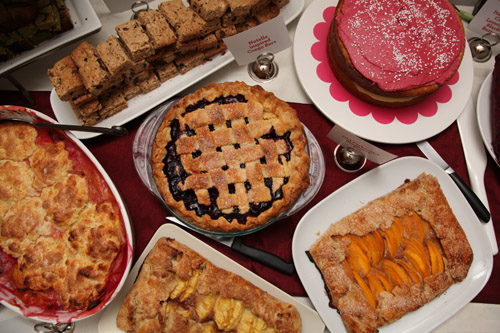 And a funny thing happened. Out of the 20+ desserts I made, they were one of the first ones to go. Sure they may not have been as sexy as the caramel bars. Or as luscious as the pineapple upside down cake. Or as beautiful as the blackberry lemon curd layer cake (I really need to blog about the trials and tribulations of that cake sometime). But they were tasty good. No one (other than the one or two gluten sensitive friends I told) knew they were gluten free. They were a hit, and despite my reservations of them not looking nearly as pretty as I wanted them to be, they were pretty enough for people to pick them up and try; they were pretty enough for people to finish them and tell me they loved them. That’s all I can ask for right? 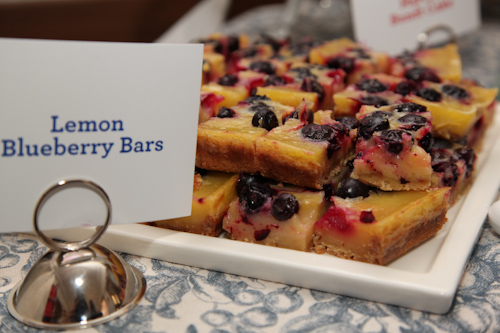 Those not so pretty lemon blueberry bars.

These gluten free blueberry lemon bars aren’t going to win me the cover of a magazine but clearly the magazine I want to be on doesn’t exist any more. Instead, I have to remember that I bake for the purpose of making people happy, not because my baked goods make pretty pictures. If they do make pretty pictures, that’s a happy bonus. But this blog is called Eat the Love. Not Look at the Love. Something I need to keep in mind when I head back into the kitchen.

Gluten Free Blueberry Lemon BarsThese gluten free bars aren’t the prettiest bars in the world, but they pack a lovely tart sweet punch with their bright sunny flavor. The flax meal helps bind the gluten free flours together (it draws water from the butter, which is why you cream it with the butter first before you line and preheat the oven), but you’ll still get a bit of a crumbly crust, which I happen to like. If you want it to hold together more though, you can add 1/2 tablespoon more of the flax meal.

Adapted from the Tartine Cookbook by Elisabeth M. Preuett and Chad Robertson

1. Place the butter and flax meal in the bowl of a standing mixer fitted with the paddle attachment. Beat on medium speed until the flax meal is incorporated into the butter, and the butter is creamy about ten seconds.

2. Preheat the oven to 350˚F. Spray a 9 inch by 13 inch pan lightly with cooking spray and then line with a piece of parchment paper, leaving about 2 inches overhanging the edges of the pan.

3. Place the confectioners’ sugar and flours in a medium bowl. Using a balloon wire whisk, vigorously stir until well blended and evenly distributed. Add the dry ingredients to the butter and beat on low speed until a smooth dough forms.

4. Press the dough into the bottom of the lined pan, evenly pressing it to the edges with your fingers. Line with another sheet of parchment paper and weigh down with pie weights, dry beans or uncooked rice. Bake for 25 to 35 minutes or until the crust starts to look dry and golden in the edges.

5. While the crust is baking, prepare the filling by placing the arrowroot starch and sugar in a medium bowl (you can use the same bowl that the flour and confectioners’ sugar was in). Using a balloon wire whisk, vigorously stir until well blended and evenly distributed. Add the lemon juice and zest and stir with the whisk until blended.

6. Beat the eggs, egg yolk and salt together in a medium bowl until well blended and you can’t see any more egg whites. Add to the sugar lemon juice mixture and beat until incorporated. Gently stir in the blueberries.

7. Once the crust is baked, lift the parchment paper with the pie weights on it, directly off the crust, and move it to the heat proof plate or bowl. Then pour the lemon filling directly onto the crust. Evenly distributing the blueberries throughout the pan, and put back into the oven. Reduce the heat to 300˚F and bake until the center of the pan is no longer wobbles, about 30 to 40 minutes.

8. Cool completely, then cover and refrigerate overnight before cutting and serving.

This blog currently has a partnership with Amazon.com in their affiliate program, which gives me a small percentage of sales if you buy a product through a link on my blog. I only recommend products (usually cookbooks, but sometimes ingredients or equipment) that I use and love, not for any compensation unless otherwise noted in the blog post. If you are uncomfortable with this, feel free to go directly to Amazon.com and search for the book or item of your choice.
64shares