A list of fabulous food events happening here in San Francisco for the Spring of 2014. 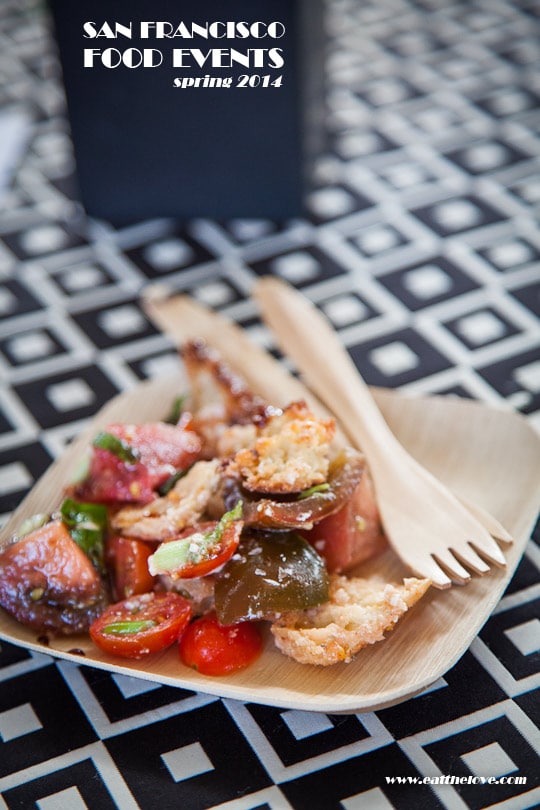 Hey there! The first day of spring was just this past Thursday and that means the weather is warming up and fabulous food events are starting to happen back-to-back-to-back here in the SF Bay Area. Here are a few of the food related events that I’m looking forward to this Spring. That is, if I can actually get away from all the recipe developing I’m doing for my book to attend any of them…

Some of the top chefs of San Francisco are coming together to raise money for Share our Strength, a non-profit dedicated to ending childhood hunger here in the United States. Chaired by Michael Tusk of Cotogna and Quince, there’s going to be fabulous nibbles and drinks from various restaurants, wineries and brewery including A16, Delfina, Frances, Rich Table, Navarro Vineyads, Silverado Vineyards, St. George Spirits, Lagunitas Brewing Company and more. Hosted at City View in the Meteon this year, tickets start at $125 for general admission but you can get a special 20% off discount using the code TOTNSF14IND.

My pals over at BiRite Market and 18 Reasons are hosting their second annual Food + Farm Film Festival and this year looks to be even better than last year. With shorts about srirachi (that magical spicy asian sauce that I love); the coffee economy; and raising sustainable shrimp to features about honey and beekeeping; chicken, hog and cattle production; and hunting for rare and lost fruit there’s pretty much a wide swath of films worth checking out if you have any interest in how and where our food is made. Tickets range from $30 for the opening and closing programs to $15 for the regular films (which often include nibbly food associated with the films) or you can buy the festival pass for $150.

Not to be confused with the fabulous blog by my pal Anita, this sweets fundraiser for Project Open Hand is being chaired by Yigit Pura, of Tout Sweet patisserie and winner of Top Chef Just Desserts season one. Fabulous sugary desserts from esteemed pastry chefs Lori Baker of Baker and Banker, Francis Ang or Dirty Habit, Jessica Sullivan of Delfina, Matthew Siciliano of Michael Mina, Ryan Wells of Millenium and many more will be featured at the event. All proceeds will benefit Project Open hand, a non-profit dedicated to proving meals to thousands of Bay Area folks who are battling serious and life-threatening illnesses. Tickets start at $85.

For those looking to get out of San Francisco for the weekend, the 7th annual Pebble Beach Food and Wine event down in Pebble Beach still has some tickets available. One of the top culinary events on the west coast, there are still some great ala carte tickets available for specific events if you don’t want to splurge for the package deals. The Tribute dinner to Charlie Trotter on Friday night looks AMAZING and watching Duff Goldmann of Baltimore’s Charm City Cakes (and the show Ace of Cakes) in person with a cooking demo is pretty darn fun (I had a chance to see him do a demo at the Portland Feast event and he’s every bit as dynamic in person as he is on his show). Long time readers will remember that I’ve covered the Pebble Beach Food and Wine event for the past few years and it’s been a blast each year. Tickets start at $100 for cooking demos.

I’ve been a long time supporter of Meals on Wheels, the non-profit that distributes food for homebound seniors here in San Francisco since before I started this blog and their annual Star Chefs and Vintners Gala event is one of the top food event that I look forward to every year, to both take photos of the amazing event and to sample the fabulous food. The evening, broken into three parts, an appetizer and wine tasting section (and silent auction), a three course meal (with live auction) and then the dessert section (with dancing) features some of the best chefs in the SF Bay Area. Chaired by Nancy Oakes of Boulevard, the list of restaurants and chefs participating include Mourad Lahlou of Aziza, Belinda Leong of b. patisserie, William Werner of Craftman and Wolves, Jonathan Black of Quince, Stuart Brioza and Nicole Krasinski of State Bird Provisions, as well a ton more. There’ll also be a some great vintners there including Duckhorn, Grgich Hills, Paradigm, Pride Mountain and more, as well as bartenders from Bar Agricole, Trick Dog, Prospect and more. Last year the gala raised a record $2.165 million which meant about 430,000 meals! Tickets start at $495.

This blog currently has a partnership with Amazon.com in their affiliate program, which gives me a small percentage of sales if you buy a product through a link on my blog. I only recommend products (usually cookbooks, but sometimes ingredients or equipment) that I use and love, not for any compensation unless otherwise noted in the blog post. If you are uncomfortable with this, feel free to go directly to Amazon.com and search for the book or item of your choice.
10shares