I occasionally get a review copy of a cookbook in the mail, which is always exciting. I often times don’t have a chance to properly sit down and make anything out of them though I read them avidly whenever I have a chance. I’m the sort of person that can take a cookbook and read it as if it were novel, taking inspiration from the recipes, reading the headnotes and descriptions of where the recipe comes from and admiring the photography. But months can go by before I actually get to make anything out of the cookbook, as I’m often too busy developing my own recipes. Still, once I have thumbed through a cookbook, the recipes that stand out will lodge themselves in my brain, waiting to jump out at me, when the opportunity arises. And thus I found myself going back to a book released a year ago, called Baked Explorations: Classic American Desserts Reinvented, by Matt Lewis & Renato Poliafito and making a variant of one of their recipes, a Blueberry Peaches & Dreams Pie when I had a surplus of peaches and blueberries. 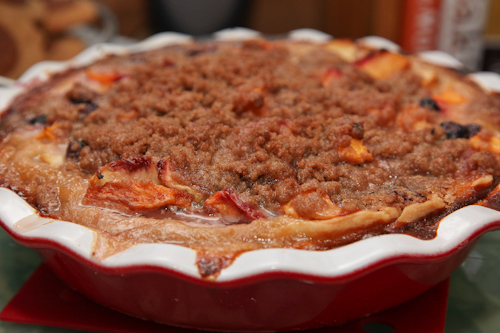 Matt Lewis & Renato Poliafito used to be advertising execs, but left corporate life to start their own bakery, Baked in Brooklyn, NY. As a former designer and art director that has left the corporate world to bake, blog and write, I can certainly relate. Lewis & Poliafito found immediate fame by being featured in a number of shows like Oprah, Martha Stewart and the Today Show (this I cannot relate to – but Oprah, Martha or The Today Show, feel free to contact me immediately). Their first book Baked, New Frontiers in Baking was a huge success (I still need to get this book! It’s on my wish list). I had a chance to meet them briefly at an Omnivore Books signing and they were as entertaining and personable as they are in the books. 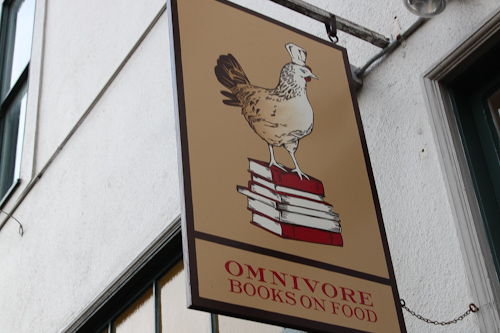 Anyone obsessed with food needs to visit this store.

While their first book was recipe based from the bakery, mostly traditional American baked goods updated, Baked Exploration is a collection of classic American recipes from across the United States, that have been updated, some more than others. What I find more fascinating about the cookbook are the photographs. The photography has a unique slant to it that appeals to the Art Director in me, with a decidedly masculine and contemporary feel, setting it apart from the ubiquitous feminine over exposed Donna Hay look that desserts and food photography seems to be trending toward. Dark woods, distressed leather and 1950s modern patterns permeate the moody photography, invoking a feeling of retiring with dessert in the parlor room, where a lighthearted game of cribbage or parcheesi might take place, along with a bourbon on the rocks. 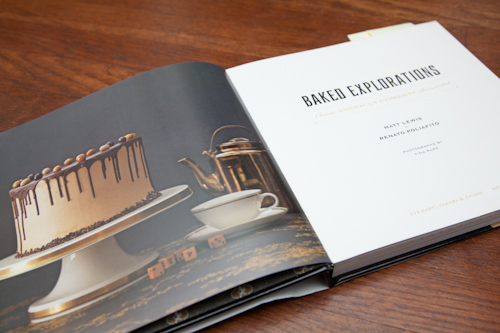 The original pie featured in their cookbook was called Peaches & Dreams, and used canned peaches. The authors talk about how they grew up in the midwest, where fruit rarely came from a farmers market, but rather out of can. True to the history of the pie, they developed the recipe with canned peaches, but tested it with fresh peaches and found it worked as well. I’ve reworked the recipe to include blueberries and tequila, which hopefully adds a little to the dreams part of the pie. I can only hope that Matt and Renato would approve of my additions. Something tells me that they just might. 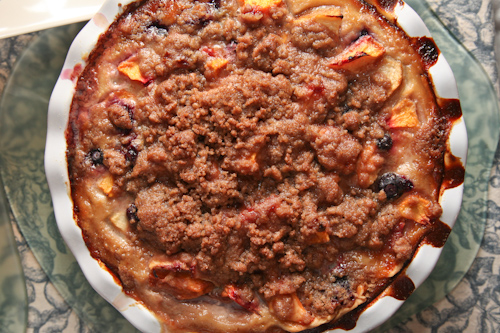 Full disclosure: I received a review copy of Baked Exploration from the publisher Stewart, Tabori & Chang. I was under no obligation to write about the book. That said, all opinions on the book are mine and mine alone.

A creamy sweet and slightly tart pie with a crumb topping, the addition of blueberries and tequila add a subtle kick to the filling that elevates this pie to the sublime. This recipe uses fresh peaches and fresh blueberries. If you want, you can use frozen blueberries and canned peaches for that true authentic midwest flavor. Just be sure to thaw the blueberries by running them under a faucet running warm water, until the water runs clear, and to dry them by pour them on a sheet pan lined with two layers of paper towels. Shake until dry. You might want to also add an extra tablespoon of cornstarch to accommodate the moisture from the canned peaches.

1. Make the crust by place the flour in large mixing bowl. Cut the butter into 1/4 inch cubes and sprinkle over the flour. Using your hands toss the butter until coated, and then flatten the butter between fingers quickly. Keep on squeezing and tossing the flour and butter together until it starts look crumbly and all the butter has been flatten or broken into smaller pieces. Sprinkle with the water and tequila and toss with a large spatula until a dough forms. Massage the dough with your hands until the pie dough comes together. Flatten into a disk and wrap well in plastic wrap. Refrigerate for at least an hour or overnight.

2. Once the dough has chilled, preheat the oven to 375˚F. Generously flour a flat surface and roll the dough (from the middle to the edge) until you have a disk 12 inches in diameter. Fit the dough into a 9 inch pie pan. Decoratively crimp the edges of the crust, prick the bottom of the dough with a fork and line the dough with parchment paper. Fill with pie weights, dry beans or uncooked rice. Bake in the oven for 20 to 25 minutes or until the surface of the dough starts to look dry and pale, with no opaque or dark areas. Remove the parchment paper with the pie weights. Beat the egg with water and brush the egg wash over the pie crust on the bottom, up the sides, and on the edges of the pie crust. Place back in the oven and bake for another 5 minutes to “seal” the crust. Remove from the oven.

3. While the pie crust is baking, make the filling by peeling and pitting the peaches. Cut the peaches into 1/2 inch slices and place in a medium mixing bowl with the blueberries. Toss with the lemon juice. In a smaller mixing bowl, place the sour cream, tequila, brown sugar, honey, almond extract, cornstarch and eggs. Split the vanilla bean lengthwise and scrape the seeds into the bowl as well. Beat the sour cream mixture together until all the ingredients are incorporated.

4. Once the pie crust is done baking, pour the peaches and blueberries into the pie crust, arranging the fruit to make sure they are evenly distributed throughout the crust. Pour the sour cream mixture over the fruit. Place the pie pan on a sheet pan to catch any spill over. Place back in the oven for 20 minutes.

5. While the filling is baking, prepare the crumb topping by sugars, flour and cinnamon in a medium bowl. Cut the butter into 1/4 inch cubes and sprinkle over the sugar flour mixture. Using your hands, toss and flatten the butter until the topping starts to look crumbly, like coarse sand. Once the 20 minutes are up, pull the pie out, sprinkle the crumb topping carefully over the pie, and then place back in the oven for an additional 30-35 minutes or until the filling is thick and bubbly. Let the pie cool completely before serving (the filling will thicken).