“Mom, when can we have more food bloggers over for dinner?” That’s what my friend Sara’s kids asked her after she had invited over Stephanie of Lick My Spoon and myself (along with our significant others) for dinner. Sara blogs over at Go Gingham, a frugal lifestyle blog and we had met at the Harry and David press trip back in October of 2011. Her kids were on spring break so her family did a houseswap with a couple in San Francisco and she immediately contacted us to see if we wanted to come over for a dinner party. Dinner with food bloggers? Who can say no to that? Tasked with dessert, I opted to bring a Blood Orange Chiffon Cake with Blood Orange Curd and Rich Vanilla Bean Buttercream Frosting. 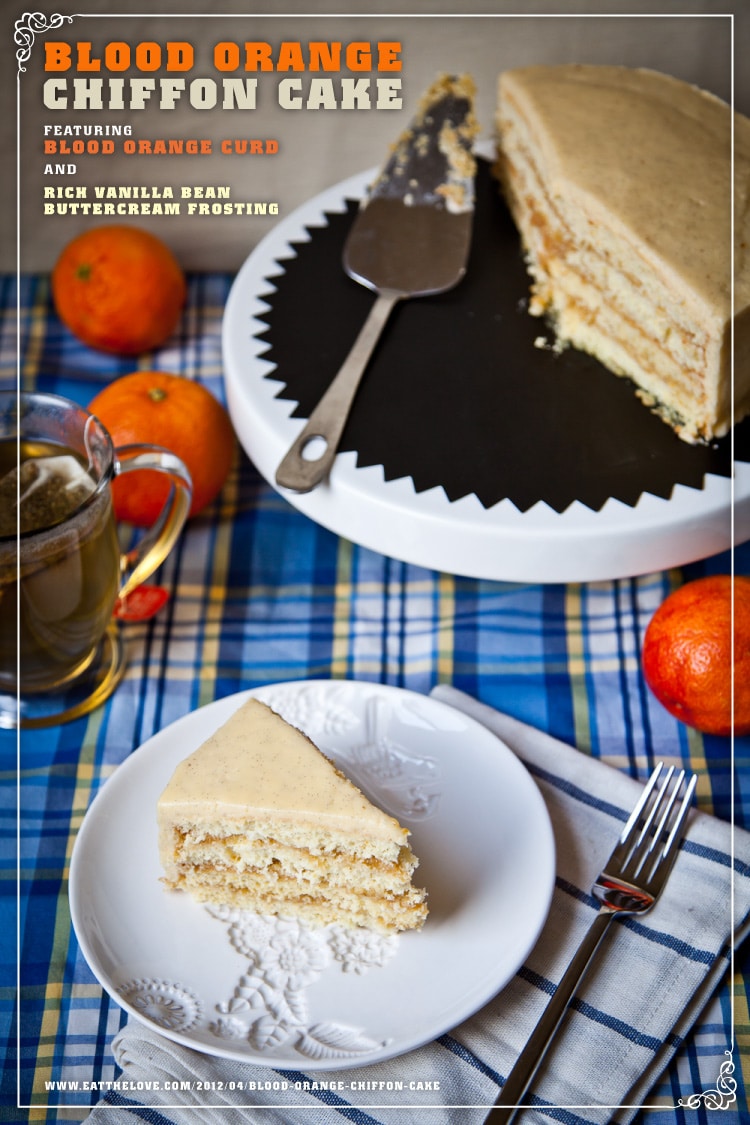 I can’t remember the last time I made a chiffon cake, but I do love making them. Similar to an angel food cake, the chiffon cake uses egg yolks as well as egg whites, giving the cake a richer flavor and yellow appearance. I had recently received a copy of the beautiful Home Baked Comfort book by Kim Laidlaw and on the cover was a chiffon cake covered in billowing fluffy white seven minute frosting. I was enamored with the picture, even though I personally am not a fan of seven minute frosting. I told myself that when the opportunity arose, I would make that cake. Dinner with a couple of food bloggers was the perfect opportunity, though, as a typical food blogger, I radically adapted it. 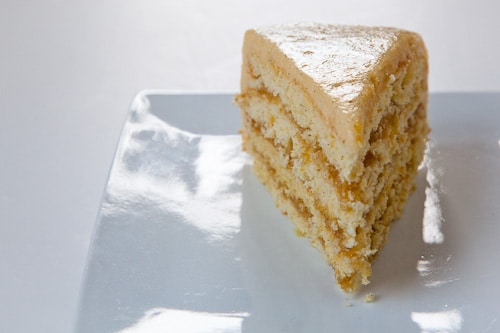 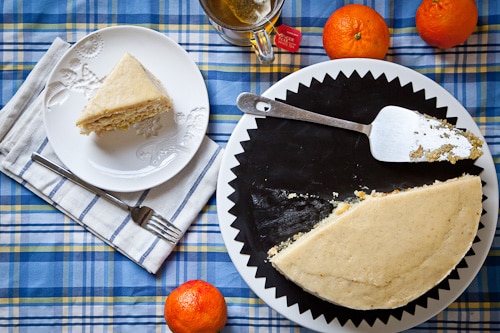 Home Baked Comfort actually has a number of recipes contributed from food bloggers and bakeries around the country, including Bakerella, Cannelle et Vanille, La Tartine Gourmande, and Smitten Kitchen as well as Flour Bakery + Café in Boston, Huckleberry Café in Santa Monica and Tartine here in San Francisco (right around the corner from me) which is awesome. Of course, Home Baked Comfort isn’t without flaws, the biggest one is their metric measurements. I love it when cookbooks and recipes include weights along with volume measurements. As you might have guessed (since I always list my metric weights first on my recipes) I’m a big proponent of weighing ingredients. But the inclusion of weights should be accurate and Home Baked Comfort consistently lists all metric weights incorrectly. A cup of sugar is 200 g not the 250 g that the cookbook lists. A cup of butter is listed as 8 oz (correct) as well as 250 g (not correct, 8 oz = 225 g). Weighing ingredients for an accurate end result only work when you have accurate weights in the first place. Hopefully in subsequent printings this will be fixed as the book is pretty wonderful otherwise. 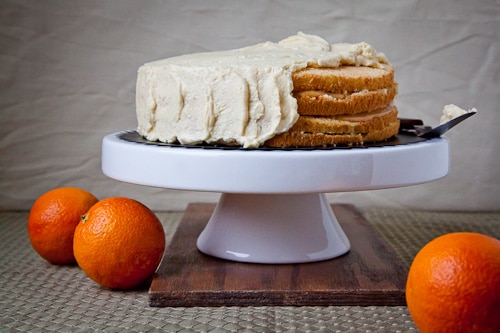 The dinner with Sara’s family was fantastic. Stephanie brought Jambalaya Arancini, Sara’s husband braved the torrential down pouring rain and grilled salmon, while her daughter made her secret quinoa salad recipe that she refused to share with anyone, including her mom (hilarious!). We dined and laughed all through the night while enjoying the company and food. The next day, with a laundry list of places that they had to go and eat, Sara and her family ran around San Francisco, eating up a storm. I can’t wait for them to come back, because I know there will be tons of more food to share with them.

Special thanks goes to Weldon Owen for providing me a review copy of Home Baked Comfort. Though the book was provided by them, I was not compensated for anything I wrote above and all opinions are my own.

By Irvin Lin
This fluffy and rich cake isn’t difficult to make but it might be a little time consuming as it involves make the cake, the curd and the frosting. Feel free to make the curd ahead of time and storing it in the fridge overnight. Just be sure to bring the curd back to room temperature as it will be rather thick and hard to spread when cold.

The recipe calls for White Lily brand flour, which is a specially processed flour made soft red winter wheat from the South. It’s pretty easy to find in the south and the Midwest, but can be difficult to find in other parts of the country. You can substitute an equal amounts of cake flour for it, or use 20 g (2 tablespoons) cornstarch and 250 g (1 3/4 cups) all purpose flour in it’s place. 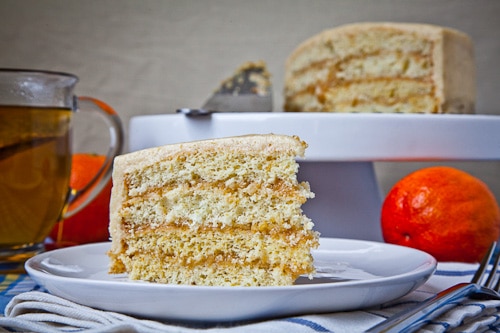 1. Preheat the oven to 350˚F and line two 9 inch round pans with parchment paper (but don’t grease the pan or paper, as the cake needs something to cling to as it rises).

5. Divide the batter between the two pans and bake in the oven for 15 to 18 minutes or until a toothpick inserted in the middle comes out clean. Remove from oven and let cool on a wire rack for 15 minutes before running a thin knife or spatula around the sides of the pan and inverting the pans onto a wire rack to remove the cake. Slowly peel back the parchment paper and discard. Let cool completely before assembling the cake.

6. Make the curd by placing a pot of water on the stove and placing a metal bowl over the pot, making sure the bowl does not touch the water. Heat the water until it boils, and then bring it down to a simmer. Place the egg, egg yolks, sugar, juice and sea salt in the bowl and whisk continually until the curd has thickened, about 5 minutes. Remove from the pot and whisk in the butter. Let cool completely before using as filling in the cake.

7. To make the frosting, place a large pot of water on the stove and turn to medium high heat. Bring the water to a boil, and then reduce the heat to keep the water at a simmer. Place the bowl of a standing mixer over the pot (try to keep the standing mixer bowl from touching the water if possible) and place the eggs, sugar, vanilla extract and salt inside the standing mixer bowl. Split the vanilla bean lengthwise and scrape the seeds out into the bowl. Stir the mixture with a whisk until it thins out, starts to foam and reaches 160˚F.

8. Once the liquid has reached 160˚F, remove from heat and place in the standing mixer fitted with the wire whisk attachment. Whip the mixture on medium speed for about 5 minutes, or until it has cooled down to room temperature and starts to look light and airy. Start adding the butter 1 tablespoon at a time, until all the butter has been incorporated. In the beginning the frosting will look broken but don’t worry, as it will come together in the end.

10. To assemble the cake first split each layer in half horizontally, to create four layers. My preferred method is to take four toothpicks and place them around the cake every 90˚, halfway up the cake edge. Then I use a long serrated bread knife and cut the cake layer horizontally, using the toothpicks as guides for my cutting. Finally I remove the top layer with either a thin flexible cutting board, or the bottom part of a 10 inch round tart pan with removable bottom.

12. Frost the top and sides of the cake and serve the same day.

This blog currently has a partnership with Amazon.com in their affiliate program, which gives me a small percentage of sales if you buy a product through a link on my blog. I only recommend products (usually cookbooks, but sometimes ingredients or equipment) that I use and love, not for any compensation unless otherwise noted in the blog post. If you are uncomfortable with this, feel free to go directly to Amazon.com and search for the book or item of your choice.
580shares