I wrote about our first day at the Pebble Beach Food and Wine already, and the food that made me feel like I was a rich sophisticated person. I’m so NOT a rich sophisticated person. But I can pretend can’t I? Sabrina and I got dressed in our “Resort Casual” wear (this was what Pebble Beach recommended we dress in, and when I consulted with my friend Peter, the fanciest friend I know, he explained that it was what one would wear to a fancy hotel in Hawaii, so now you know). Day two was packed for us, including two fantastic breakout sessions and the legendary Tasting Pavilion. It was at the Tasting Pavilion that I got my inspiration for my plated dessert, which included the strawberry marshmallow that I previously posted about, as well as this garnish for the dessert, a Bacon Peanut Brittle that is incredibly addictive all on it’s own. 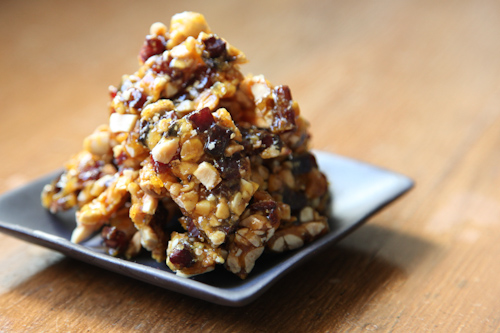 I’m going to be honest here and tell you wasn’t completely convinced by the idea of waking up early to drive over to the Pebble Beach resort (and to try and navigate the windy roads) to eat grill cheese and drink wine at 10am. But I knew that all you readers of this blog would want to hear the blow-by-blow details, and I’m a giver that way, so I dragged myself out of bed and hopped in the car with Sabrina to go and eat cheese and drink wine for breakfast. 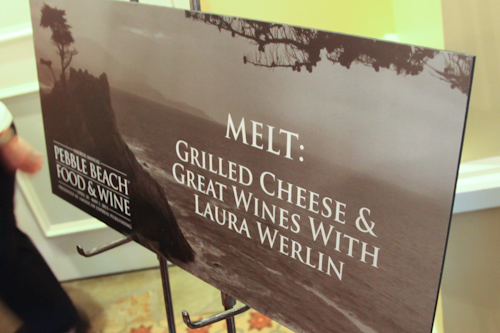 However, Laura Werlin, author of Grilled Cheese, Please!, made it all worth the effort of waking up. This is her second book on Grilled Cheese (with rumors that she’s working on a third book in the Lord of the Grilled Cheese trilogy) and I can truly say that these were the fanciest, best grilled cheese sandwiches that I’ve ever had at 10 am in the morning at a food festival. Actually, I jest, but they were darn good, and surprisingly different from each other. Starting with sampling plate of the cheeses that were in the grilled cheese, Sabrina and I couldn’t help but grin every time we took a bite of the cheese, and a sip of the wine. How can you not love cheese and wine, any time of the day? 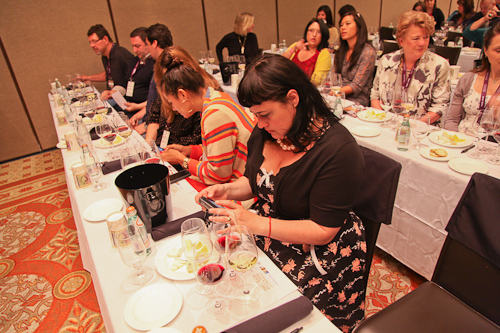 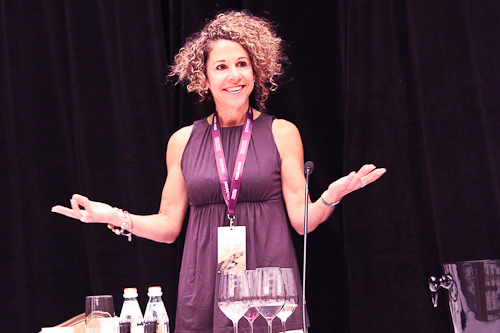 The sassy Laura Werlin. Check out her guns! 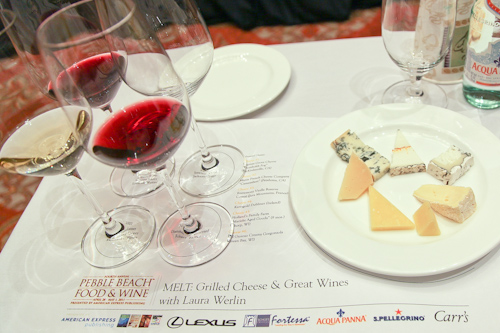 Wine and Cheese for breakfast.

The first grilled cheese sandwich, warm from the kitchen, was the California, made with all California ingredients. Sliced California almonds encrusted the top and bottom of the locally made cinnamon raisin bread held together by the Humboldt Fog and Monterey Jack cheese with chipolte chiles suspended inside the dairy goodness. Sweet, spicy, tangy, crunchy all together in one gorgeous bite. 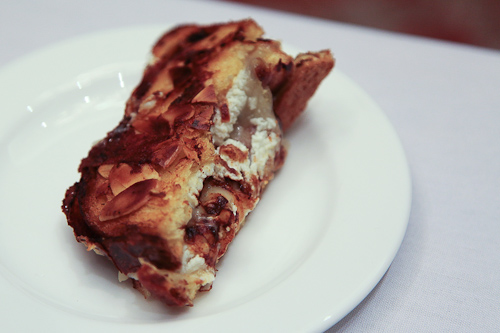 Next up was the Grilled Camembert and Comté sandwich with mushrooms on baguette. Little secret to preparing the sandwich: when slicing the bread, be sure to scoop out some of the inside bread, hollowing it out and giving more room for the cheese and mushrooms to sit inside. I’m so trying this at home next time I make a grilled cheese with a baguette! 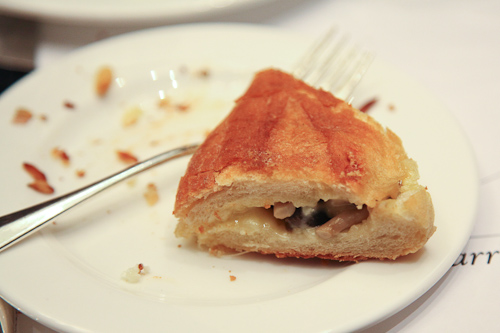 My favorite grilled cheese came next, the double cheddar sandwich, filled with tomato jam and the outstanding Kerrygold Dubliner. The Dubliner is a pretty unique cheese. If you were to draw a Venn diagram of popular cheeses, with cheddar, parmesan and swiss all circles that overlap each other in a triangle shape, smack in the middle would the Dubliner which shares traits of all three. Why didn’t I know about this cheese before? Pairing it with the sweet bright tomato jam was like a built-in tomato soup. Brilliant. 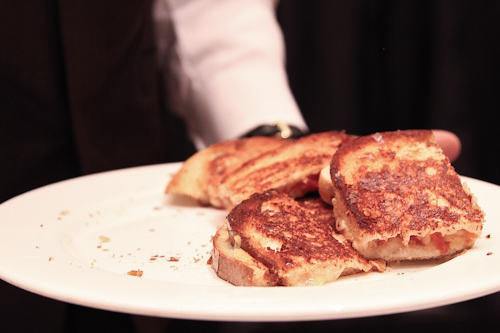 Being served Dubliner with tomato jam grilled cheese by a fancy waiter.

We ended with the hazelnut butter, creamy Gorgonzola, Gouda and honey sandwich, which matched really well with the sweet Icewine. I have a special affinity to Gouda cheese, having spent a year in Holland in high school, where I learned to love Gouda cheese. This Gouda was aged for nine months, by first generation Dutch immigrants who moved to Wisconsin from the Netherlands, about ten years ago. No wonder a bite of it transported me back to my high school years! 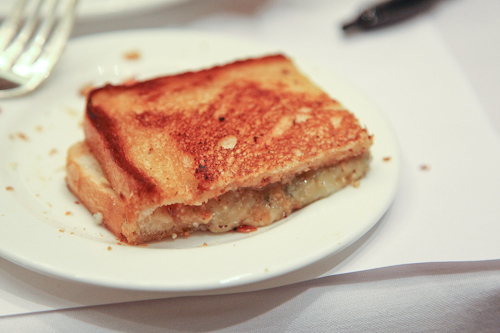 I tweeted throughout the session, making all my twitter friends jealous that I was eating fantastic grilled cheese, even giving Laura her own hashtag of #LauraWerlin before I found out that she had her own twitter handle (the appropriately named @cheezelady). Sabrina and I later had a chance to chat with Laura and she was sweet as the honey on that last sandwich I ate, conversing with us about San Francisco (she’s local!) and how much she loves cheese (well that’s obvious!). As we took off, I played paparrazi and snapped a picture of her with Jacque Pepin and his daughter, Claudine. 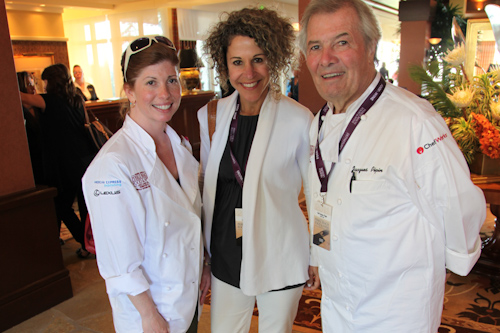 We bounced over to the Tasting Pavilion Tent afterwards and then ended up back at the Inn at Spanish Bay for a session on Port hosted by Ramos Pinto, but you’ll have to come back here on Friday to read about those adventures, and to see where I got inspiration for my dessert. That said, another incredibly addictive component of the plated dessert inspired by my visit to the Tasting Pavilion is this Bacon Peanut Butter Brittle. Super easy to make (as long as you are comfortable making caramel) it’s great as a topping for ice cream or a fancy plated dessert, or all by itself. I know after I made it, AJ kept on nibbling on it, until I told him he had to stop or else there wasn’t going to be any left for my dessert. I still caught him grabbing a piece while I wasn’t looking though. You’ll probably do the same. 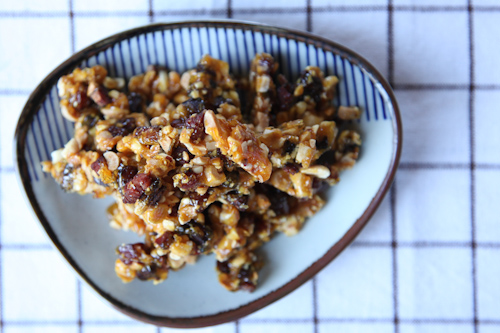 This recipe is super easy to make. Just make sure to use high quality bacon (I used homemade bacon, but any decent slab/thick cut bacon will do). Make sure to taste the bacon after you cook it (which is a good excuse to nibble at it anyway) to see how salty it is. The amount of saltiness of the bacon will influence how much salt you want to add to the brittle itself. You can easily double or triple this recipe if you want, but I’ve included the amount necessary for the plated dessert. 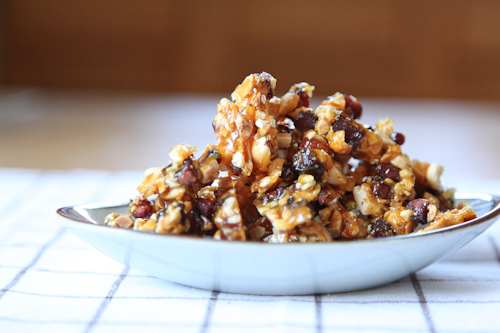 1. Line a baking sheet with a nonstick silpat liner.

2. Cook the bacon over medium heat until crispy in a heavy skillet. Drain the bacon and place bacon on a plate lined with a couple of paper towels to further absorb fat. Taste the bacon for it’s saltiness.

4. Once the peanuts are toasted, pour them on to the lined baking sheet. Add the bacon and toss them together to mix. Spread them out on the sheet to make sure they are on one layer.

6. Once the caramel is golden brown, pour it over the peanuts and bacon and then quickly toss it all together with a heatproof spoon or spatula. Evenly distribute the brittle in a flat layer on the silpat (I ended up using two silicon spatulas to properly spread the brittle as flat as possible). As the caramel cools it will become hard, so you want to work fast. After you spread the brittle flat, sprinkle a decent quality salt (don’t use regular iodized salt, it’s too harsh and chemically) over the brittle to taste (my bacon wasn’t to salty so I used about 1/2 teaspoon but you might want less if your bacon is saltier).

7. Once the caramel has cooled, break into little pieces and enjoy. The brittle will keep for about a week in the fridge in an airtight container. 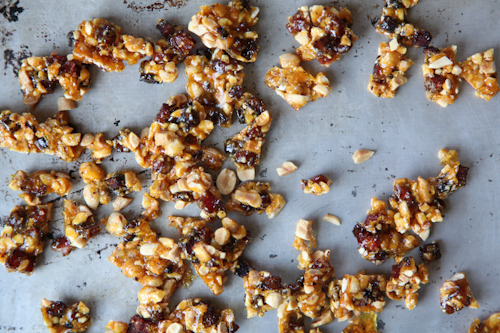 This blog currently has a partnership with Amazon.com in their affiliate program, which gives me a small percentage of sales if you buy a product through a link on my blog. I only recommend products (usually cookbooks, but sometimes ingredients or equipment) that I use and love, not for any compensation unless otherwise noted in the blog post. If you are uncomfortable with this, feel free to go directly to Amazon.com and search for the book or item of your choice.
340shares