Vanilla beans are crazy expensive. They also come in a dozen varietals and picking and choosing a type of vanilla bean to use in a recipe is sort of like picking and choosing the right type of red wine in a beef bourguignon recipe. You know it’s going to effect the end result but really, does that cheap two-buck Chuck really make THAT much of a difference from the expensive pinot that you love drinking, especially after all those seasonings and other ingredients go in there? For me, I love using vanilla beans, but there’s something extremely precious about them when I had them in the house. I would save them until they started to dry out and go bad, always thinking to myself “I need to make a vanilla brulee or vanilla ice cream to really let that vanilla bean shine. Otherwise it will just get lost in these cookies…” Inevitably the bean would become a mere husk of a shell and I’d be forced to toss it, sad that I didn’t use it. 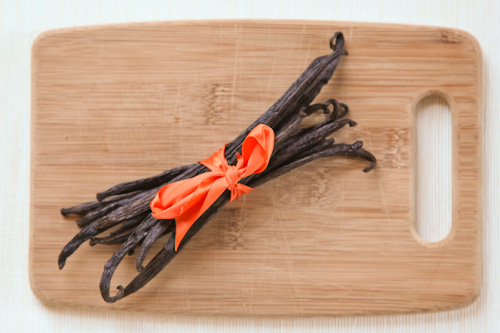 All that changed when I splurged on a pound of vanilla beans after getting paid for a big freelance project (it’s feast or famine as a freelance designer – everyone bounce over to my portfolio website and look at my pretty design work and then get someone to hire me. Thanks). Do you know how many beans are in a pound of vanilla beans? No, me neither, but it’s a lot. And as I learned to become less precious with the beans, I also learned that I still wanted to squeeze as much out of the beans as possible, even after scraping out the seeds for whatever recipe I was using them for. The pods themselves, even bereft of the flavorful seeds which is often the only part of the vanilla bean most recipe calls for, were fragrant and exotic in a way that made me question why the phrase “you’re so vanilla” was ever invented. Being the frugal person that I am, I repurposed these beans into three things that have become invaluable to my dessert pantry: vanilla extract, vanilla sugar and vanilla salt. 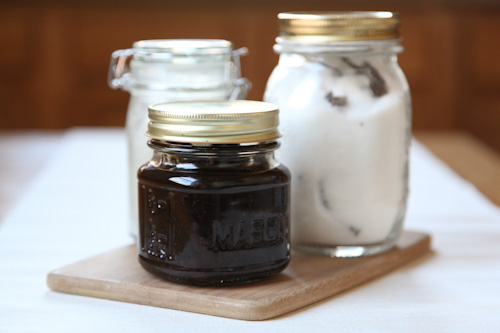 The first item, vanilla extract, is dead easy to make and the one that most people suggested I do when I tweeted out that I now was in possession of a pound of vanilla beans. Already ahead of you all tweeps! The best thing about the vanilla extract is that not only can you use it in place of commercial vanilla extract but the longer the beans sit in the vodka, the more it will extract flavor. When I have extra beans pods, I just toss them in there, for extra concentration, and when I am running low on vanilla extract, I just add some more vodka into the mix to extract more flavor. It’s like a never-ending fountain of vanilla extract! 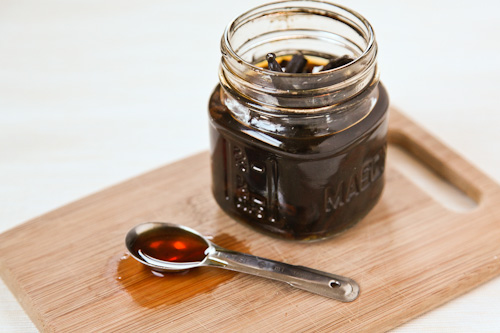 The second item, vanilla sugar, is just as easy to make and makes everything fancy. The vanilla scented sugar gives an allusive extra dimension to pretty much anything you sprinkle it in or on. Add it to the top of pie crusts or on individual cookies before you pop them in the oven for that sweet vanilla sugary crunch. Mix it into the a coffee drink or homemade hot cocoa to add depth without the overpowering vanilla flavoring you get with store bought vanilla infused coffee or cocoa. 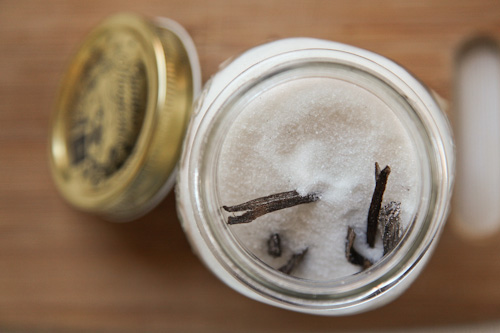 Vanilla Sugar is a nice touch on pies and in coffee.

Finally the third item, vanilla salt, is probably the least known vanilla infused ingredient, but most versatile. Often people ignore the fact that salt is an integral addition of desserts and baking, helping to cut the sweetness of the sugary treats and enhance the integral flavors of the dessert. Anyone that has watched Top Chef or any other reality cooking show knows what happens when you don’t salt your dish properly (hint: it often involves losing the challenge). Salt is a magnifying glass, enhancing the flavors that are already there. What makes vanilla salt so versatile is that it can be used in both savory food and sweet food. Salted caramel candies, rich buttercream frostings, or a sprinkle of vanilla salt on chocolate chip cookies are all examples of how to use vanilla salt in sweet goods. A sprinkle of vanilla salt on roasted carrots, seafood (especially scallops or lobster) or tomato based sauces & soups all heighten the flavor of the dish while adding just a touch of the exotic. 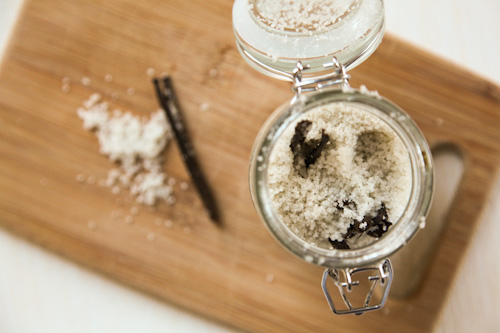 Vanilla salt is great for both savory and sweet applications

In the end, I’m still working through my pound of vanilla beans – adding them to every dessert I make the way I add salt and pepper to my savory dishes. Thankfully, when I finally run through the entire pound, I’ll have these infused ingredients to last me even longer.

Vanilla extract is easy to use and makes a wonderful hand crafted gift to give to your loved ones. Though there are many recipes out there for how to make vanilla extract, at it’s basic, you just pour vodka over the used vanilla bean pod (chopped the bean into 1 inch pieces helps, but really isn’t that necessary) and let it steep for 1 month to 6 months in a clean airtight glass container. The longer you let it steep (or the more vanilla bean pods you put in the vodka) the stronger the extract will be. I recommend quality distilled vodka (try not to use the super cheap stuff), as anything with impurities will make your vanilla extract taste off.

Try to keep your jar of homemade extract in a closed cupboard, as the vanilla extract can break down when exposed to light (this is why commercial vanilla extract is always sold in those brown bottles). You can get all fancy and strain the extract after the pod has steeped long enough but I’m not fancy. As the extract gets low, just fill up the jar with more vodka, occasionally shaking it and swapping out the old vanilla pods (roughly once every six months) with new ones. Voila! A never ending supply of vanilla extract.

Vanilla sugar is equally easy to make and easy to give as well. Just take the used vanilla pods and place them in a clean jar with white granulated sugar. Let is sit for at least two weeks (though the longer the vanilla pod sits in the sugar, the more fragrant it becomes), giving it a shake every day or so (or whenever you remember) and use it whenever want.

Like the vanilla extract, vanilla sugar can be replenished by just adding more sugar to the jar, and occasionally changing out the vanilla bean (probably once every six months) as well. Wrap it in a pretty bow and a fancy label and you have an easy holiday gift for those people who are easily impressed.

Just like extract and sugar, vanilla salt is a snap to make as well. Add the used vanilla pod to a clean jar, fill with sea salt and let it the scent of the vanilla pods infuse the salt for a couple of weeks. The one thing to take note is to not use regular iodized table salt. The iodized salt from the grocery store has a harsh chemical taste to it that won’t work well with the vanilla.

I use a grey sea salt (it has a little moisture already in it) but you can use whatever quality salt you can find. Obviously if you want to get fancy you can use Maldon or Fleur de sel, but I don’t think it’s that necessary. Thankfully most grocery stores nowadays stock a variety of salt to pick from, all at reasonable prices.

This blog currently has a partnership with Amazon.com in their affiliate program, which gives me a small percentage of sales if you buy a product through a link on my blog. I only recommend products (usually cookbooks, but sometimes ingredients or equipment) that I use and love, not for any compensation unless otherwise noted in the blog post. If you are uncomfortable with this, feel free to go directly to Amazon.com and search for the book or item of your choice.
532shares