Recently, while driving back from yet another gorgeous hike in Maui, I had a conversation with AJ about the various places we’ve visited in the past year. Seattle came up, as we had visited there back in January to hang out with a bunch of twitter/blogger pals of mine. I never did post about it (though I had an excellent time up there) and no this posts isn’t about that trip. But it had me thinking of our fantastic host Jenifer who graciously let AJ and I stay in her bed, while she slept on a tiny little day bed in her office. Jenifer is from the South originally (Arkansas to be specific) and hence southern food is in her blood. That said, she’ll probably be utterly horrified to see me making a bastardization of cornbread that I made on the island that night, but hopefully she won’t disown our friendship. Because I gotta say that the Tropical Cornbread with Pineapple is the stuff that a southern would be appalled at, but something AJ and I ate voraciously. 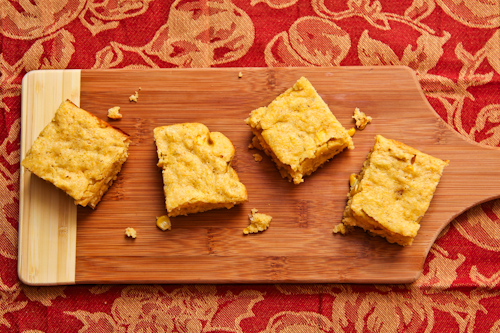 I fully blame the fact that I’ve been on Maui for a chunk of time. The temptation to add rum, pineapple, mango or macadamia nuts to anything I’m baking is pretty hard to resist. It also doesn’t helps that AJ and I buy a pineapple pretty much every single day and then consume it immediately. I love pineapple and the combination of sweet corn and pineapple just sounded too good to pass up. 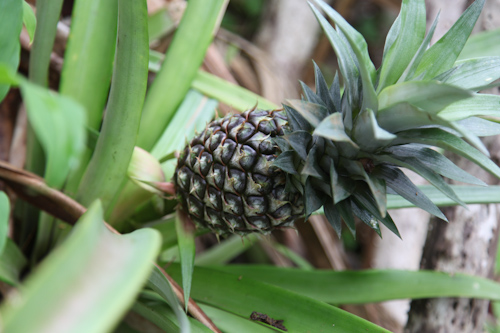 We found this growing pineapple on a separate hike. I'm obsessed with pineapple.

We actually went on two different hikes, one that barely constituted a hike (more like a walk on asphalt) at the Iao Valley. I can’t really call it anything other than gorgeous, reminiscent of our trip to Kauai and the Waimea Canyon, though less lush and overgrown. And like the Waimea Canyon, there’s just no way to accurately capture the epic scale of the Valley in a photograph. Unlike the Waimea Canyon though, you can drive up to the Iao Valley and just walk right up to the paved top of the viewpoint. I hesitate to call it a hike, but since it’s listed in our hike book, I feel justified in saying that it was. 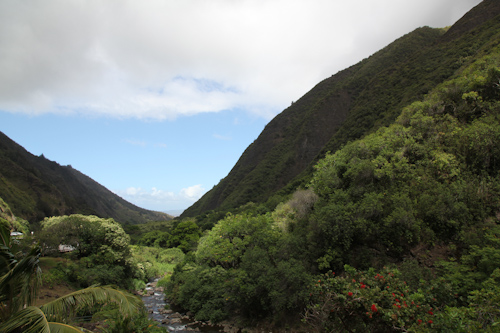 The Iao Valley, nearly impossible to capture the epic beauty in a photograph. 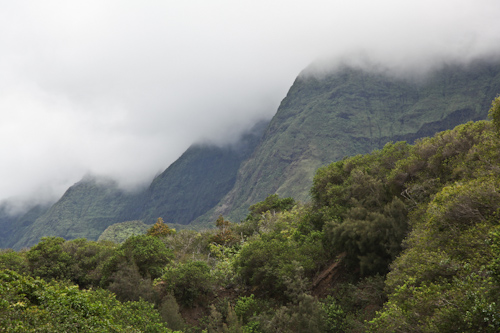 That's not fog, that's a cloud clinging to the Iao Valley mountains. 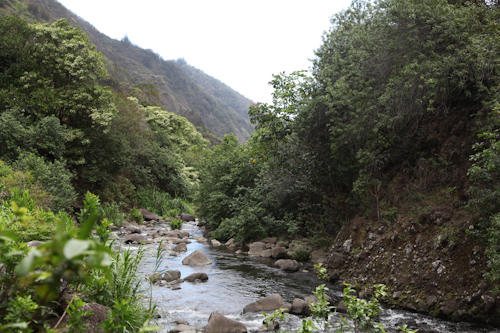 The tiny stream is what carved out the Iao Valley

The second hike had us going up an exceedingly steep unmarked trail next to telephone #5 to see a weathered old cross that high school students put up back in the 60s. The hiking book claimed that we could climb the cross with the ladder that was propped up there, but once we got there, we decided the cross and the ladder looked a little too worn for our comfort level to climb. 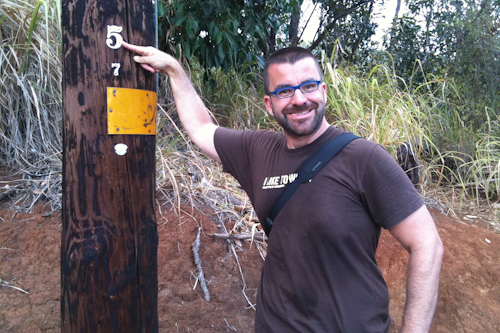 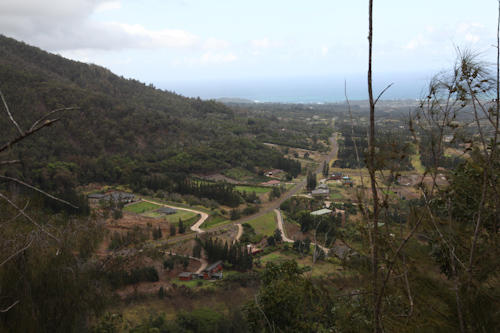 The view from the hike up to the Cross. 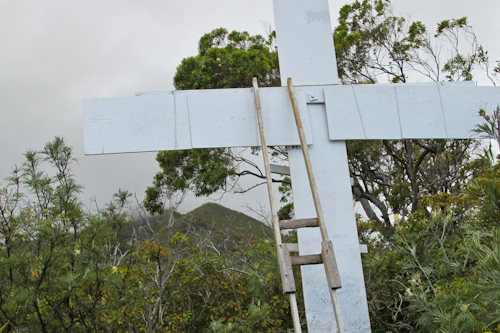 Tuckered out from all our physical activity (since we have spent most of our trip on the beach, any sort of physical exertion probably would have tired us) we stumbled home and grilled some Korean style marinated meat that I had the foresight to make that morning (yay marinate!). Yes, the marinate has pineapple in it (it sweetens AND tenderizes!). Then I made cornbread for dinner. 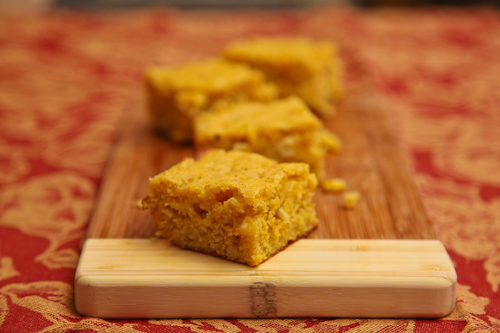 Sweetened from the pineapple and local macadamia nut honey, along with the super sweet local corn that we found at the farmer’s market, a touch of cayenne pepper and lime zest makes this cornbread the sort of thing that most southerners will cringe at. But if they can overlook the fact that it’s not cornbread, but more of a corn cake like baked good, I think they might enjoy it. Just don’t tell Jenifer about it. She’ll probably slap me for trying to pass it off as cornbread.

Tropical Cornbread with Pineapple
Sweet and slightly spicy by the addition of the cayenne pepper, this cornbread is addictive and perfect for lounging about on your lanai in Maui on a cool breezy evening, or, if you aren’t on a tropical island, as an addition to a picnic or summer BBQ. I used an 11” x 7” baking pan, but feel free to use a 10” cast iron skillet or a 10” cake pan. Just spray and add two tablespoons of butter to it and heat the skillet or pan on the stove until the butter is sizzling. Then scrape in the batter and put it immediately into the oven to bake for the same amount of time. You’ll get an fantastic crust to the cornbread this way. 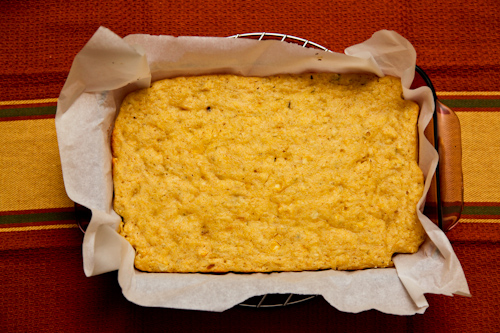 1. Preheat an oven to 350˚F. Spray and line a 11” x 7” baking dish with parchment paper, leaving two inches of paper overhanging the top.

2. Place the flour, cornmeal, pineapple, corn, baking powder, lime zest, black pepper, salt, and cayenne pepper into a medium sized mixing bowl. Take a balloon whisk and vigorously stir the dry ingredients until the pineapple and corn are coated and the flour and cornmeal are a uniform color.

3. In a medium sized bowl, add the yogurt, honey, melted butter and egg together. Stir with a fork to a uniform color and consistency.

4. Add the wet ingredients to the dry ingredients and stir and fold the batter until most of the batter is mixed and moist. Don’t worry if there are some dry pockets, you just don’t want to overmix the batter. Immediately scrape the batter into the prepared baking dish and move to the oven.

5. Bake for 40 to 45 minutes, or until a toothpick inserted in the middle of the pan comes out with crumbs adhering to it and the top of the cornbread is golden brown. Cool in the pan, on a wire rack, for at least ten minutes before lifting up the parchment paper and moving to a cutting board to cut up and serve.

This blog currently has a partnership with Amazon.com in their affiliate program, which gives me a small percentage of sales if you buy a product through a link on my blog. I only recommend products (usually cookbooks, but sometimes ingredients or equipment) that I use and love, not for any compensation unless otherwise noted in the blog post. If you are uncomfortable with this, feel free to go directly to Amazon.com and search for the book or item of your choice.
70shares