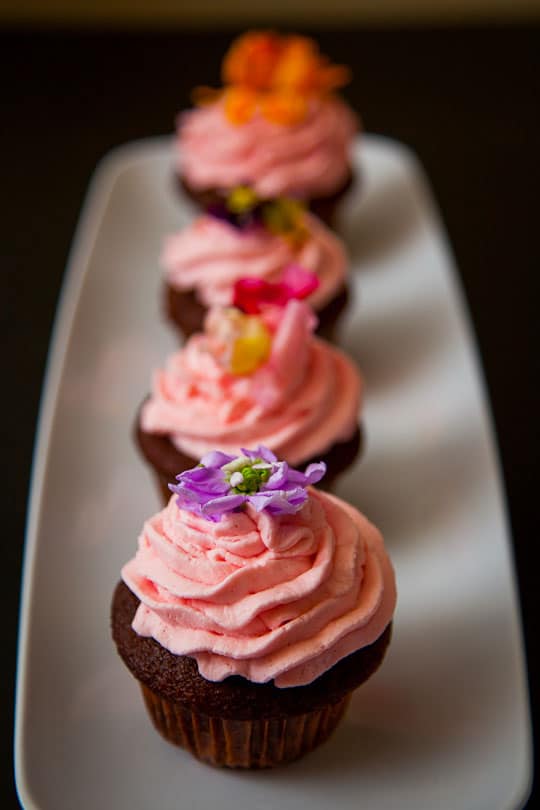 I had every plan to bake a pie today, on Pi(e) Day – March 14. 3-14 (get it? Pi! 3.14!) I was planning on baking a lemon meringue pie, as the lemon tree outside was bursting with fruit and since AJ and I are the only people in our apartment building that actually harvest the fruit, the lemons just sit on the tree until they rot which is just sad. I’ve thought many a times that I should gather up the lot of lemons and walk over to Bi-Rite Grocery and see if they would buy them from me, but that seems like way too much work. But, of course, that means I have access to fresh, free, completely organic lemons (SUPER LOCAL as well!). Go me! Mostly this just means I cut up the lemons and put them in hot water like the Old Chinese grandma that I am turning into. Regardless, I had images of lemon meringue pie or a lemon chess pie if I didn’t have enough eggs for a meringue for Pi(e) Day. Or maybe a lemon shaker pie! That could work as well as I LOVE making lemon shaker pie.

And then I was planning on baking a chicken pot pie to go with the lemon pie – double pie points! I’ve been hankering for chicken pot pie for awhile, and though I usually make it with a herb cheddar biscuit crust, this time I would make it with a savory flaky crust, using a recipe that Cook’s Illustrated formulated that I had been meaning to try (vodka and water in the crust! The alcohol burns off and doesn’t help the gluten form, so the crust stays super tender and flaky!).

But alas. I did not. Instead I proceeded to make Pi(e) Day which, of course, was also Spring Forward Day (Daylight Savings Day), Spring Cleaning Day. This included doing our dishes, all our laundry (we had A LOT of laundry), mopping the kitchen and bathroom floors, scrubbing and de-molding our bathtub, cleaning the toilet, vacuuming our hall, and sweeping our stairs. Oh yeah, and dusting. I did dusting as well. I hate dusting.

So I did not have time to harvest fruit to make a pie. Bye bye double pie points.

Instead I made cupcakes… Actually the reason I made cupcakes was I had made some homemade red food coloring a couple of weeks ago and I wanted to see if I could use it to make a red velvet cake. Apparently the dye in the beets aren’t strong enough (or I didn’t use enough of it, or I used too much cocoa powder) as the cupcake came out a distinctive BROWN color. Not even a burgundy or a dark sienna. BROWN. Like Pantone 4695C Brown. That brown. Perhaps next time I’ll try to make red food coloring out hibiscus instead of beets, or do a combination of both.  We’ll see. So I just called them a chocolate cupcake. No matter. I used the leftover red food coloring and used it to make pink mascarpone/cream cheese frosting for the cupcakes. Because nothing says spring like pink frosting and chocolate cupcakes. At least, that’s what I say.

Note: Whilst baking, I was listening to Ellie Goulding’s Lights album, and the Glee Cast Recording Vol. 1. Just in case you are looking to simulate the same working environment that I was in during the baking process.

These chocolate cupcakes are basically red velvet cupcakes without the red dye. To turn these into true Red Velvet Cupcakes, mix in 2 oz of red food coloring after the vanilla. Make sure to mix slowly as the food coloring might splash and stain your countertop. If you aren’t a cupcake fan, you can bake this batter in three 9″ pans to make a layer cake. Divide evenly in pans and bake for 40 to 45 minutes. The frosting recipe makes enough to frost the layer cake as well. 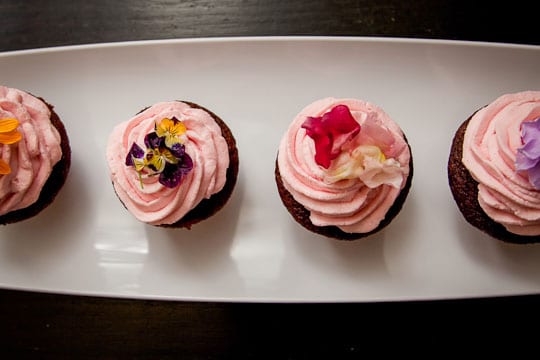 Directions
1. Preheat oven to 350˚F and prepare 2 muffin/cupcake tins by lining with muffin cups. Place the flour, cocoa powder and salt in a medium bowl. Stir vigorously with a balloon whisk until uniform in color and all dry ingredients are evenly distributed. Place sugar and oil in the bowl of a stand mixer fitted with a paddle attachment. Beat until blended. Add eggs, one at a time, beating well between each egg. Add vanilla, beat well to incorporate.

3. Divide the batter between the muffin tins lined with muffin cups. You should have enough batter for 24 cupcakes. Bake for 24-26 minutes, or until a toothpick inserted into the center cupcake comes out clean. Cool for 10 minutes in muffin tin once you take them out, and then remove from tin and cool to room temperature on wire cooling rack. 4. After the cupcakes have cooled completely to room temperature, make the frosting by first whipping the heavy cream until soft peaks form. Put in the refrigerator while you prep the rest of the frosting. Blend the cream cheese and marscarpone cheese in a stand mixer fitted with a paddle attachment until smooth. Add vanilla and the red food coloring (if using) and then the confectionary sugar, mixing on medium speed until well blended.

5. Fold the whipped cream into the cheese mixture. This is going to be tough to do, and your arms probably gonna get tired folding the whipped cream, and you’ll be tempted to just start mixing it in rigorously, but keep folding. It’s worth it. Once done, fill a pastry bag with a star tip at the end with the frosting and pipe onto the cupcakes. Drop some decorative sprinkles on top for festivity or conversely, put a fresh edible flour on top to give it that spring time feel.

One more thing. Try not to get the frosting all over your face as you eat it. This blog currently has a partnership with Amazon.com in their affiliate program, which gives me a small percentage of sales if you buy a product through a link on my blog. I only recommend products (usually cookbooks, but sometimes ingredients or equipment) that I use and love, not for any compensation unless otherwise noted in the blog post. If you are uncomfortable with this, feel free to go directly to Amazon.com and search for the book or item of your choice.
308shares