If you’ve been following along with some of my past posts about the Alexia Foods “Reinvent a Classic” I’ve been tasked to create a new French fry flavor for Alexia Foods (along with 20 other bloggers) in a contest to come up with something fantastic fabulous. The problem for me, I have TOO many ideas. How can I narrow down my ideas to just ONE fry flavor? I’m not sure, but one of the ideas, a Blackened Cajun Waffle Cut Russet Potato Fry didn’t make the final cut because for various reasons, but I think it’s a winner and will certainly be making it again! 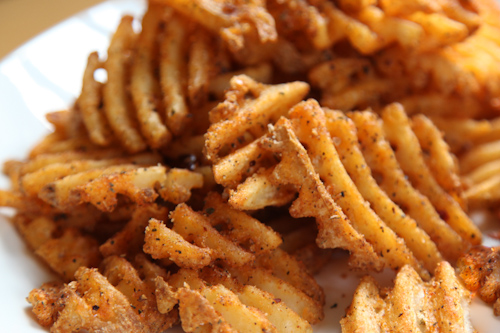 The best way I can think of narrowing down my flavor ideas is to have a French Fry Party. The minute I suggested it to my friend Peter, he immediately lit up and was all “YES! I’m in.” Didn’t have to ask twice about that now did I? So I sent out an email blast to a few of my friends and within minutes I got responses telling me that they were ready to sacrifice their waistline to help a friend out.

I love my friends. 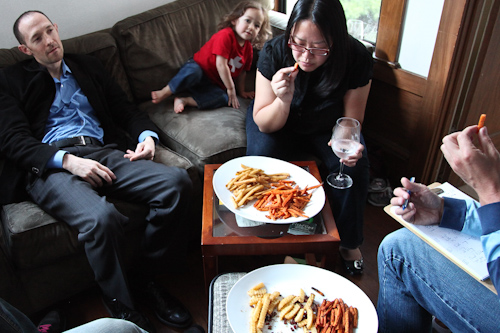 My friends carried the burden of taste testing my fries.

In the end, I realized I had WAY too many ideas to throw at my friends. About 20 plus ideas that I knew I had to narrow down. I mean the idea of tasting 20 different fry flavors sounds great in THEORY but talk about French fry overload.

So sadly, I bid adieu some of the more out there ideas like the Umami Overload Fry (parmesan cheese, soy sauce and porcini powder), the Southeast Asian Fry (lemongrass, lime and ginger), and the Srirachi flavored fry (which were similar to another discard idea, the Kimchi fry). As much as I liked these ideas (and a few more) they were either not doable (I couldn’t source soy sauce powder) or too polarizing (I mean, I love Srirachi sauce, but not sure if everyone else would). 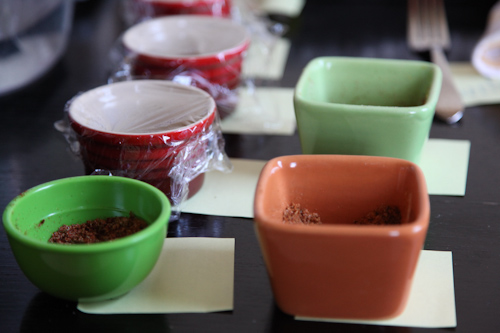 My final eight flavors that I picked definitely had my friends talking and comparing notes. I have a habit of doing a lot of complex flavors combinations in my sweet desserts (you can probably tell that by my recipes) and it’s no different with the salty and savory items I create as well. 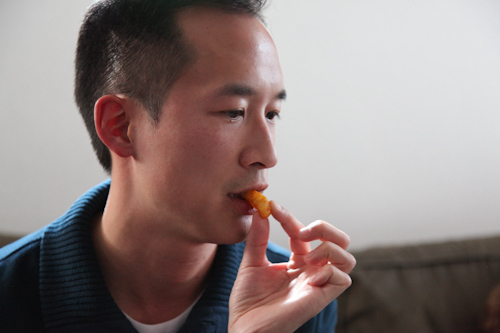 My friend Jonathan flew all the way from Hong Kong to eat some fries.

I had a blast serving up fries to my friends, and making them guess what each flavor was. They all played along well, taking notes, and ranking each of the fries on a scale of 1-10. In the end four were definitely winners, and four didn’t quite stand up to their scrutiny. 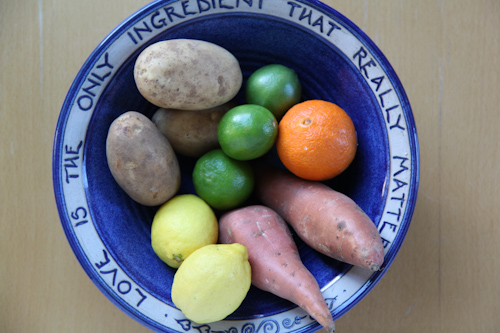 Some of the ingredients I used in my fries seasonings.

The bottom four fries were:
The Asian Orange Sichuan Peppercorn Spice Sweet Potato Julienne Cut Fries with fresh ground Sichuan peppercorns, orange zest, ginger powder, salt, white pepper, and brown sugar. They ranked it at a “3” and commented that it needed more salt and tasted rather generic to them. This surprised me, but after I tasted I realized that the Sichuan Pepper was a rather one note flavor and not as robust as I had hoped (Sichuan peppercorn loses it’s umph after it’s ground, which probably wouldn’t work well with mass produced frozen fries anyway). 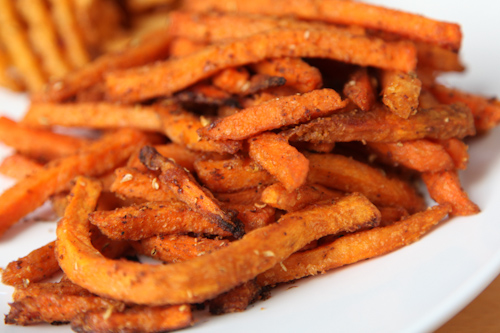 The Paella Sweet Potato Julienne Cut Fries with black pepper, garlic, salt, cayenne pepper, paprika, onions, saffron threads and lemon zest. They ranked it a respectable “6” but were perplexed by the fruitiness that the saffron threads imparted and the sweet to spicy flavors that were happening as they continued to eat the fries. 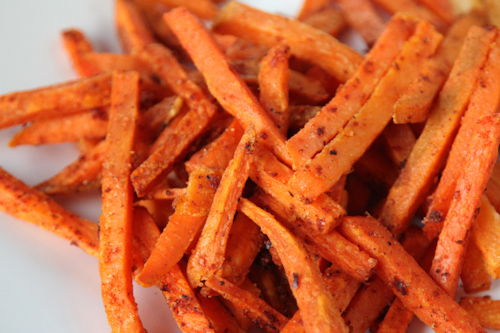 The Harissa Sweet Potato Julienne Cut Fries with coriander, garlic, salt, cumin, cayenne pepper, lime zest, mixed ground peppercorns, and paprika. A decent “7” ranking, they thought their was a pleasant spice and chili powder taste to the fries but they weren’t outstanding compared to the others. 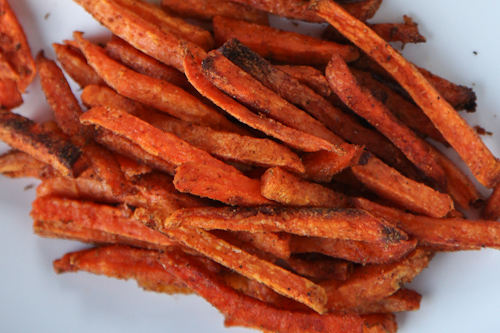 Finally there was the Blackened Cajun Waffle Cut Russet Fries, which I started this post with. My friends did love it, but they said it had a slow building spice and it needed to be served with a ranch or blue cheese dressing to cool your mouth. It ranked a respectable “7” by itself, but I think it’s should have been ranked higher, especially if I had served it with some Ranch dressing (I made everyone eat the fries without ketchup or any other sauce to get an accurate read of the flavors). Then again I love spicy food, so I’m giving you the recipe in case you want to make it at home. 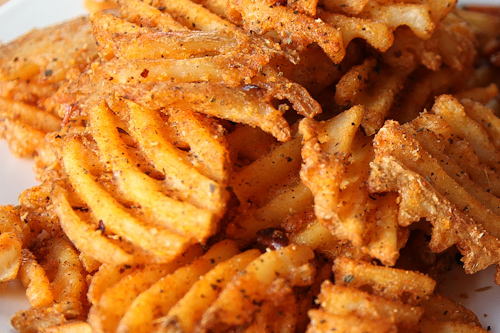 Oh, and swing by next week for the TOP four fries flavors selected by my friends and help me choose which fry flavor I should submit to Alexia Foods (they all were ranked an 8 or higher by my friends). I think you’ll like some of the ideas I came up with.

[This is a sponsored post. I did receive compensation from Alexia Foods to write about developing a new fry flavor, but all opinions are my own. For a full disclosure statement about my sponsored post policy, please visit my FAQ page]

Blackened Cajun Waffle Cut Russet Fries
These fries make a great snack or appetizer for a party. Serve them along with your favorite ranch or blue cheese dressing, or just by themselves if you have an iron tongue.

1. Preheat the oven according to the directions on the back of the bag. Line a baking sheet with a silpat or aluminum foil.

2. Combine all the spices together in a small bowl and blend with a fork until evenly distributed and uniform in color.

3. Empty the bag of frozen Alexia Waffle Fries into a large bowl. Sprinkle the mixed spices over the fries and toss with your hands for about two or three minutes. The fries will be frozen hard so at first the spices won’t stick. But once they start to thaw a bit by the warmth of your hand and the ambient temperature of the room, the spices will start to stick to the fries. Keep tossing the fries until this happens. You want all the fries covered in the spices and only a few spices left on the bottom of the bowl.

4. Once the fries are seasoned, lay them out on the lined baking sheet evenly, without any fries overlapping. Bake according to the instructions in the bag.

5. Serve hot from the oven, with the dipping sauce of your choice.

This blog currently has a partnership with Amazon.com in their affiliate program, which gives me a small percentage of sales if you buy a product through a link on my blog. I only recommend products (usually cookbooks, but sometimes ingredients or equipment) that I use and love, not for any compensation unless otherwise noted in the blog post. If you are uncomfortable with this, feel free to go directly to Amazon.com and search for the book or item of your choice.
154shares